The big 2014 ECU football preview: Pirates will be worth watching

East Carolina has itself a stellar quarterback and stars at receiver and on the defensive front. Can the Pirates overcome losses on the offensive line and in the secondary -- not to mention a step up to the AAC -- to replicate last season's success?

Share All sharing options for: The big 2014 ECU football preview: Pirates will be worth watching

1. Well THAT came together nicely...

You've got a decent offense, but your defense is lagging behind. You've been to two bowls in three years, but the quality of your team overall needs a boost. Hire a new defensive coordinator!

Tens of head coaches try this every year, but most of the time it doesn't have an incredible impact. Or, to put it a different way, for every positive outcome, there's a negative one and an outcome that changes nothing. For Ruffin McNeill, 19-19 after his first three seasons in charge in Greenville, it was the former. He hired former Skip Holtz assistant Rick Smith to jazz up an experienced defense, and Smith's take on the 3-4 defense was perfect for the personnel on hand. East Carolina improved from 91st in Def. F/+ to 51st.

Meanwhile, the defense's improvement coincided with an everything-comes-together season for quarterback Shane Carden. With targets new and old and a steady running back, Carden completed 71 percent of his passes, and ECU's offense improved from 77th in Off. F/+ to 34th.

It all came together for ECU in 2013, in other words. The Pirates went from a lucky 8-5 (with a 2-0 record in games decided by one possession) to an unlucky 10-3 (1-2 in one-possession games), barely missed out on the Conference USA title game in their last year in the conference, and departed for a new conference with a top-40 overall ranking. This is how a fan would draw it up, but it rarely comes together this nicely.

The one drawback to having an experienced team, however, is that it doesn't remain experienced forever. ECU heads to the AAC with quite a few stars -- Carden, receivers Justin Hardy and Isaiah Jones, end Terrell Stanley, OLB/missile Montese Overton -- but the depth of experience on the offensive line and in the back eight of the defense has dissipated. ECU should be pretty good again and will have plenty of opportunities for upsets early in the season, but it might be difficult to put together a top-40 result again.

Still, McNeill has himself a hell of a staff and a hell of a quarterback; you could do worse than having that in your back pocket as you head off to a new league.

2. The defense did spring some leaks

ECU's defense improved dramatically in 2013, but the improvement faded a bit when the new-defense smell wore off. As was the case in 2012, opponents figured out they could pass relatively effectively and did so more frequently as the season progressed.

ECU was just a couple of breaks from heading to Marshall with an 11-0 record. The offense stalled in the second half against Virginia Tech in a five-point loss, and the Pirates outgained Tulane by 233 yards but fell in triple overtime thanks to a 99-yard pick six and a series of stalled drives.

Against Marshall, however, it wasn't close. Marshall quarterback Rakeem Cato completed 17 of 28 passes for 272 yards, and Marshall jumped out to a 24-0 lead 20 minutes in, then coasted. It was a disappointing result considering ECU had been the better team for most of the season (year-end F/+ rankings: ECU 40, Marshall 56), but the Pirates wrapped things up with an eventual thumping of Ohio in St. Petersburg and got to 10 wins for the first time since they went 11-1 and finished ninth in the country in their vaunted 1991 season. 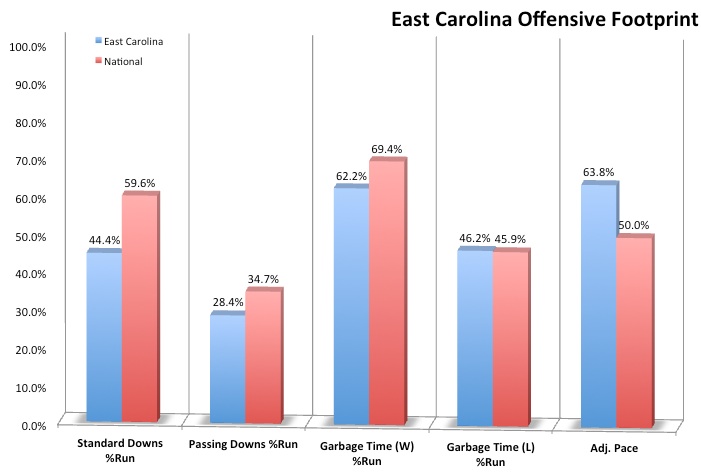 East Carolina basically turns every opponent's defense into a bend-don't-break unit. The Pirates ranked 22nd in Success Rate+ (efficiency) and 98th in IsoPPP+ (explosiveness). Against basically everybody but Virginia Tech, they were able to ride a short passing game to great success, spreading you out, testing your tackling ability on the perimeter, then jabbing up the middle with Vintavious Cooper.

Okay, he takes a few too many sacks given the quick-passing nature of his offense. But that's basically the only negative thing I can think to say about Carden heading into his senior season.

The senior caught fire about midway through his sophomore season, completing 68 percent of his passes with 20 touchdowns to six picks over the last eight games of 2012; then he basically sustained that pace for most of 2013. He struggled against Virginia Tech (like basically every other quarterback in 2013) and Marshall, but his passing line in the other 11 games was as follows: 73 percent completion rate, 32 touchdowns, four interceptions. Carden makes solid reads and easy throws, and when he's forced to scramble, he does a rather efficient job of it.

His backfield complement, Vintavious Cooper, is gone, and that could hurt. Cooper's numbers were nothing if not solid -- solid efficiency, solid explosiveness. But his biggest service may have come as a bailout option. He caught 44 of 51 Carden passes and averaged nearly 10 yards per catch with them. He was perhaps the most reliable pass-catching running back in the country, and while this year's batch of running backs may be just fine (Breon Allen caught 10 of 10 passes for 138 yards, Chris Hairston showed high-end explosiveness potential, and redshirt freshman Marquez Grayson was very nearly a four-star recruit), it's not a given.

Carden's receiving corps will be a mix of new and old. His top two targets return, and they're perfect pieces for this type of offense; Justin Hardy and Isaiah Jones caught 78 percent of their passes and averaged an efficient 8.3 yards per target. At the same time, ECU's 2014 recruiting class was loaded with receivers, and any of six freshmen could see roles behind the big two.

Of course, the biggest loss for Carden might not be Cooper. At the end of 2013, ECU had two three-year starters and a two-year starter on the offensive line; all three are gone. Four players with starting experience do return (39 career starts), but last year's line was good on standard downs and great on passing downs, and if that changes, ECU's efficiency-based offense might need a few more big plays than it's capable of generating. 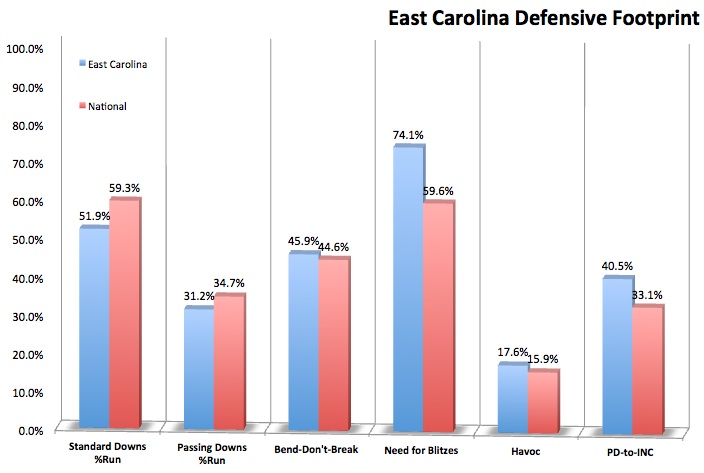 Despite the new coordinator, ECU's defense was relatively similar in style in 2013 as it had been in 2012. The Pirates pulled off the same bend-don't-break approach they forced opposing defenses to take, sacrificing some efficiency in the name of big-play prevention.

That will probably be the case again this year. ECU must replace four of its top six defensive backs and perhaps its best pass rusher (outside linebacker Derrell Johnson), so I doubt the Pirates will suddenly adopt an aggressive man defense. There's enough star power up front that the run defense could get better while the pass defense gets worse. And opponents will pass once again.

The best 3-4 lines have the requisite size, which is sometimes hard to put together at a mid-major; there are only so many huge nose tackles with any semblance of talent. But with a little bit of experimentation and a key transfer, ECU might have all the size it needs. It appears the Pirates will be able to start a 299-pound end and rotate between three 300-pound noses. And they welcome N.C. State transfer K'Hadree Hooker into the mix as well.

Between solid size up front and pursuit from the linebackers, ECU offered few opportunities for opposing runners. The size improves in 2014 and could offset some turnover at LB.

8. Lots of questions in the back

Lots of defenses return five starters in a given year. It's not optimal, but you can survive it. The problem for ECU in 2014 might be that not only are the losses specialized in a couple of areas (linebacker, safety), but the second string was also hit pretty hard. In all, five of ECU's top eight linebackers are gone, as are the top three safeties.

ECU did sign quite a few interesting freshmen at these spots, that will matter more for 2015 and beyond. In 2014, ECU's success could come down to players like Domonique Lennon and Maurice Falls filling much larger roles than they've been asked to fill before.

This is a DB-friendly defense, in that ECU isn't asking for aggressive man coverage on islands, but you still need competence.

It was a mixed bag for ECU in terms of special teams last year. The returns were strong (and should be again), but kicker Warren Harvey was a bit unreliable, and punter Trent Tignor outkicked his coverage a decent number of times. Special teams is a small-sample thing that can change pretty dramatically from year to year, but aside from Tignor, everybody's back, for better or worse.

10. Plenty of opportunities to make some noise

There are certainly some questions here. A good portion of ECU's success was based on the ability of its safeties to prevent big plays and its offensive line to protect Shane Carden and create opportunities on passing downs. And both the line and secondary are facing rebuilds.

But it's pretty easy to like what you see elsewhere on this roster. Carden and his top two targets return, the front seven should still be big and fun, and there are candidates at running back and linebacker. All the secondary and offensive line have to do is avoid total collapse, and ECU could approximate last year's top-40 ranking.

If they end up in the No. 40-to-50 neighborhood, that introduces an array of possibilities. It puts ECU close enough to potential home wins over North Carolina and UCF. It makes the Pirates potentially prone to road losses to USF and Tulsa.

ECU should expect to reach another bowl, which is always a satisfactory in the first year in a new conference, but the Pirates will have every opportunity to make a bit more noise than that. This could be a pretty fun team to watch in 2014.