What if Northwestern football players don't vote to join the union?

One frequently overlooked detail: Northwestern players aren't in a union yet. They're just allowed to choose whether to join one.

Share All sharing options for: What if Northwestern football players don't vote to join the union?

On April 25, Northwestern’s players will vote on whether they want to unionize. This week marked the first time that coach Pat Fitzgerald and some of his players spoke at length about the issue (and approximately the 100th straight week of everyone freaking out about it).

So let's take a look at four big questions about the vote and what the movement might do to collegiate athletics.

More from our Wildcats site

More from our Wildcats site

So are the players probably going to vote against the union?

At Saturday’s media availability, a few Northwestern players said that they won’t be voting for the union. That had a lot of people speculating that the union is going to get shot down before it even gets started. However, take Saturday’s quotes with a grain of salt.

It could just be a coincidence that the few players Northwestern made available to the media all happened to be anti-union, but given the university’s motives, you can’t definitively call that group representative of the team. Running back Venric Mark was already believed to be against the union (and has been since the beginning), and center Brandon Vitabile, who also spoke to the media, might not have as much at stake as other players.

Moreover, while Pat Fitzgerald isn’t able to threaten players for voting for the union, there’s naturally less of an incentive for players voting yes to publicly say they’re voting against their coach’s wishes.

A number of players on Twitter have supported the union (many have private accounts, and they don’t need the backlash, so they’ll remain nameless), and defensive tackle Chance Carter is the one player to admit publicly that he is pro-union.

The vote is done by secret ballot, so the notion that players will vote no because they’re scared of consequences from Fitzgerald is weak. At this point, anybody who says they have any idea how the players are going to vote is lying to you. Just like Kain Colter and Ramogi Huma are probably overconfident, the players selected at practice on Saturday made a "yes" vote seem far less likely than it probably is.

Let’s say the players do vote against the union. Is it dead?

Probably not. It might be dead at Northwestern, because the players would have to wait a full year to try to unionize again. However, Huma said he has been contacted by players at other schools who are interested in unionizing, and players at schools like Georgia, Georgia Tech, and Miami have showed support along the way, so it’s going to happen somewhere.

There’s a misconception that if the players vote against the union, the employee tag will go away. The cat is already out of the bag on that front, as Peter Sung Ohr, the regional director of the NLRB in Chicago, has set a precedent with this case. That doesn’t mean every unionization attempt will be successful, but the main argument against CAPA from the beginning was that there was no precedent. That’s no longer true.

Can Fitzgerald lobby his players to vote no? And if so, what’s his pitch?

Fitzgerald is allowed to give his position on the issue and "educate" the players until 24 hours before the vote — he’s doing a lot of educating, it seems — but he cannot ask players how they are voting, nor can he do anything that would be perceived as a threat or a promise. For example, he can’t threaten players with harder practices if they vote yes, nor can he bribe them for voting no.

The players declined to say what Fitzgerald’s discussions with the team have consisted of, though some things seemed to slip out during media availability. The players who spoke recognize that Fitzgerald has fought for them to get more protections from the NCAA — Fitzgerald has been in support of an increased stipend — and even though he hasn’t been able to get any more protections pushed through, the players evidently still trust him to get it done without a union.

Will that work with a majority of the players? Who knows. CAPA has never alleged that Fitzgerald hasn’t fought for his players — in fact, Colter has called him a great "boss." However, they claim that the track record clearly shows that Fitzgerald’s lobbying hasn’t helped athletes, despite his best efforts. The reasoning for each player’s vote will differ, but Fitzgerald’s strategy seems clear: convince his players that he agrees change is needed, but that this is the wrong way to do it. 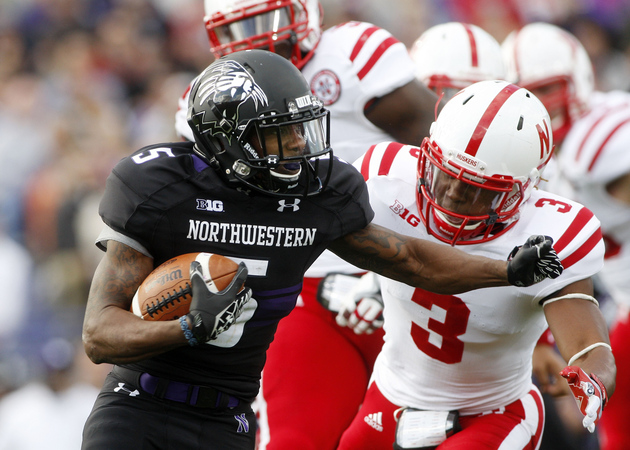 Running back Venric Mark has referred to the union as "[former quarterback Kain Colter's] movement," rather than one necessarily for current players. Jerry Lai, US Presswire

I’m scared of change. Is the union the biggest threat to college sports?

On Sunday, NCAA President Mark Emmert said that a union would "blow up everything about the collegiate model of athletics." He also called the movement "grossly inappropriate." That’s ironic, because I’d call his statement a gross overreaction.

"Union" is a loaded word to a lot of people, and what gets lost in a lot of the debate on this issue is that the players would still have to bargain; they wouldn’t just get whatever they want. Last week, we laid out a scenario in which the university would give minor concessions to help improve player safety.

If the players do end up unionizing, all you’re likely to see at the beginning is increased medical coverage for players — not exactly something that will send the NCAA up in flames. There’s certainly a chance that schools could concede so much that they eventually drop some non-revenue sports, but that wouldn’t be the first step.

You could make the argument that the O’Bannon lawsuit and the new anti-trust lawsuit from labor attorney Jeffrey Kessler could be even more damaging. If the O’Bannon plaintiffs win, the players could get some of the TV licensing money that the schools currently rake in — potentially a much bigger loss than the monetary value of what CAPA plans to ask for. If that were to happen, schools could face a choice: spend less on all sports, or cut non-revenue sports to keep up in football. The obvious answer, from a financial standpoint, would be the latter.

Meanwhile, the Kessler suit literally wants to blow the whole thing up.

A union would change things in that the players would have a voice that they don’t currently have. It also certainly makes the NCAA uneasy to call its "student-athletes" employees. As far as the effect on the collegiate model, the O’Bannon and Kessler lawsuits are the bigger threats. But since the union issue is the most real right now, it’s getting all of the backlash from the NCAA.