Urban Meyer's powerful offense needs a complement on the other side of the ball. Can co-DCs Chris Ash and Luke Fickell build a defense that succeeds at a little bit of everything?

Michigan State and Clemson did Urban Meyer and Buckeye nation a big favor in ruining the 24-0 undefeated streak that initiated the Urban regime. Their wins over Ohio State in last season's Big Ten Championship and Orange Bowl made clear the need for changes on the Buckeye defense in order to take the Playoff era by storm.

After taking over for exiled Jim Tressel (Youngstown State University's new president), Meyer built an excellent offense, but struggled to fully maximize the potential of the program. Finishing 42nd in defensive S&P simply wouldn't do for a program with a tradition of smashmouth offense backed by dominant defense.

While Meyer's known for his spread-out formations, his game is all about option football. Ohio State pummeled opponents in 2013 with a power running game built around a massive and veteran offensive line and the running abilities of Carlos Hyde and quarterback Braxton Miller. Urban's genius translated immediately to what the Buckeyes had in the cupboard on offense.

However, his genius doesn't necessarily translate to the other side of the ball. His 2006 and 2008 Florida national championship teams were keyed in no small part by Charlie Strong defenses, which ranked third in defensive S&P both years.

After seeing the Ohio State defense struggle against Big Ten offenses, a damning indicator that change was needed to replicate the Gator formula for acquiring rings, Meyer brought Chris Ash from Arkansas to join co-defensive coordinator Luke Fickell in fixing it.

Ash had been making a steady rise up the coaching ranks for the last half-decade before Urban Meyer called him up to Columbus.

The 4-3 over, quarters-based defense Ash runs is becoming a mainstay in college football for the way in answers some of the challenges of handling spread tactics.

The main selling point of the over front is that it's designed to feature speed, and defenses already need to get speed on the field in order to handle the amount of space that spread offenses are putting them in. The defensive ends are protected from double teams by alignment, and the outside linebackers can be speedy or hybrid players who live on the edge.

Next, the quarters coverage that defines Ash's defense satisfies the first question all defensive coverages have to ask in today's world: "is it sound against four verticals?" Defenses that can't put their players in position to defend verticals-based passing attacks have fallen by the wayside, as they fail to protect the end zone from easy access.

The other selling point of the 4-3 over/quarters is its variations. Ash has a few checks and versions to his quarters coverage that provide his system with flexibility. This is his vehicle for completing the quest all defensive coaches are on: how to be simple and sound against so many different offenses.

Because of the rise of tempo and spread option tactics like packaged plays, it's becoming increasingly difficult to play sound defense against everything your opponent can throw at you. As Ash notes on this primer on cover 2 fire zones, the more you install in your defense, the more your players have to be aware of the potentially disastrous mistakes that can arise.

Ash's main response to that is to build his base defense around the over front and quarters coverages, then rely on playing solid on first and second down. That affords opportunities for blitzing on third down, when the offense slows down to take a breath and reach for the right play.

Ultimately, it's an approach designed around spilling the ball to the perimeter and then beating plays with pursuit and hard-filling safeties:

When the defensive backfield plays with proper leverage and response to plays and the safeties can cover ground and tackle, it's a defense that becomes very difficult to drive the length of the field against.

The challenge is engraining those responses and points on leverage to the team. Even with a pared-down playbook and a base structure designed to adapt and respond to any offense, quick tempo and diverse opponents mean that players are responsible for a considerable amount of on-field adjustments and communication. Other teams that utilize this style of defense will prioritize veteran leadership over other considerations, in order to keep their players in sound position.

The 2013 Buckeye defense, led by Fickell and Everett Withers (now JMU's head coach), was mostly designed around the playmaking abilities of two players: corner Bradley Roby and linebacker Ryan Shazier. The tremendous speed of Shazier allowed him to perform a role that the safeties could not: the team's eraser. Many of his 144 tackles came while chasing down plays that had already pushed offensive players past the initial line of defense.

Both Roby and Shazier were positioned on the boundary/weakside of the defense in a 4-3 under front designed to take away the edge, then use Shazier's speed to chase down the ball when it went to the wide side of the field.

The team had problems here, centered partly around assignment busts and partly around structural flaws. One was that opponents were frequently able to beat zone coverages:

In this instance, there's no need for Shazier to leave the tight end alone like that. By fixing his eyes on the quarterback, he allows himself to be manipulated and Sparty to get a chunk of yardage throwing between the two best Buckeye defenders.

Their safeties were also victimized in deep coverage. They didn't demonstrate great recognition of passing patterns or appropriate leverage:

The way the safety here attempts to undercut the pass is an example of horrendous fundamentals in quarters coverage.

In general, run support and proper leverage from the safeties were lacking. That set the Buckeyes up for failure again and again:

There is no force defender here to keep the ball in the middle, where the Buckeye D is packed, so Jeremy Langford is allowed to take the edge.

Despite losing Roby and Shazier, Meyer already has a great deal of talent accumulated in Columbus, with more on the way. He's looking for Ash to channel it into an effective defense that doesn't gift yardage to the opponent with bad fundamentals and assignment confusion.

He's also expressed an intention to take away easy yardage allowed by playing weak zone coverages. He instead wants to challenge more routes on the tree. 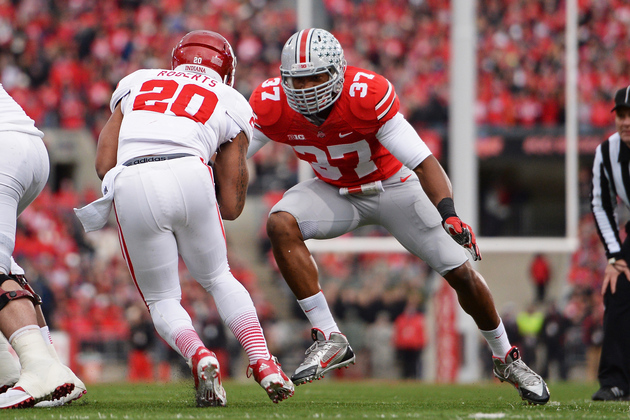 So Ash is building this aggressive, challenge-everything defense within the confines of his own risk-averse philosophy.

The Buckeye plan involves playing quarters, with the corners playing shadow technique, which is basically press coverage. It's the style that Pat Narduzzi's Spartans employ. In addition to the corners pressing the outside receivers, the Buckeye linebackers play close to the line of scrimmage and quickly bump and match the inside receivers:

They match and trade-off routes quickly and turn inside passing lanes into quickly constricted lanes. They'll be doing it out of true 4-3 personnel, with hybrid players like Darron Lee or Chris Worley playing the sam linebacker position. Against four- or five-receiver sets, the sam player replaces the middle linebacker and a nickelback comes in to play the sam:

Nothing else changes. The Buckeyes will mix things up from time to time with cover 1, to maintain the aggressive approach to defending the quick passing game. They'll probably also employ some looser coverage for occasions when their DBs can't handle an opponent's matchups.

The interesting trait to Ash's Buckeye defense is in how it differs from that of Narduzzi's Spartans. At Michigan State, the safeties play close to the line of scrimmage and have freedom to pick up vertical routes more quickly in relief of the linebackers and get them involved more quickly in the run game.

Ash is less eager to involve his safeties as primary run-force players, but he still chooses to attempt to spill plays to linebacker pursuit with his defensive ends. The result is a lot of stress on the linebacking corp:

Initially, the linebackers are taking steps to defend potential pass routes by the receivers before adjusting after the snap to the fact that it's a running play. The sam linebacker has to force the ball inside, but he's quickly trapped inside of a big receiver, who's in position to keep him from taking the edge away from the offense. 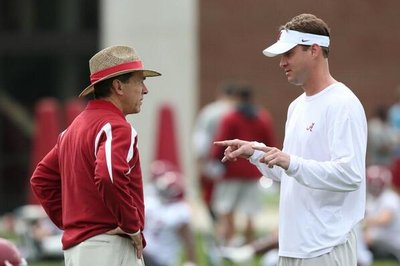 On this play, the sam tries to respond by flying upfield and taking away the edge with penetration. But the runner is too quick, and the defense is left exposed on the perimeter for an eight-yard run.
Throughout the spring game, the defense really struggled to play with good leverage at linebacker under these circumstances. Ash is asking his linebackers to aggressively match underneath routes while also leveraging the run properly with only a seven-man front.
For this to work in the season, it will require a few traits:

1. The front seven has to totally master the base defense.

The line and linebackers have different responsibilities for different run blocking schemes, as well as different route combinations. The key to playing good base D is understanding those responses quickly.
The Aggies ran over Ash's defense with the same version of inside zone from the same formation, without the Hogs executing or adjusting their gameplan for how to stop the play:
This play was an automatic five-to-10 yards every time A&M called it. That can't happen. If you can't execute your base defense and you play with bad leverage, it won't matter that you have two deep safeties to try and erase mistakes, unless they are named Ronnie Lott and Earl Thomas.

Inside the Hogs' new defense

To read plays and then respond laterally or downhill with enough speed to meet ballcarriers quickly and stop forward momentum will require players with the kind of knee-bend and lateral quickness that Shazier had. This style won't work with stiff or slow linebackers.

3. The line has to stuff plays.

Since the linebackers will playing a read-and-react style, the major opportunity for negative plays will come from dominant defensive linemen. Ash will play his tackles as "left" and "right," meaning that each will have opportunities as a three-tech to get into the backfield and make plays. Defensive ends Noah Spence and Joey Bosa will also have some space to operate in. A big season from the front four will go a long ways towards killing drives.

A two-deep defensive philosophy comes alive when the safeties are comfortable and playing instinctively, flying around and meeting strung-out ball carriers at the line of scrimmage. That's how you get tackles that resonate throughout the stadium.
The Buckeyes didn't get consistent safety play in 2013. They've arranged their defensive structure to protect these players in 2014. Young safeties like Vonn Bell need to reward that protection by using their freedom to flow to the ball and make plays.
The Meyer-Ash-Fickell marriage of conservative defense with an attempt to squeeze and control offenses is one that probably needed a pre-nuptial. Michigan State plays this system a bit differently, with techniques along the front to aid the linebackers, more aggressive blitzing to attack with, and more tightly aligned safeties to help squeeze the offense.
All that said, there are some good coaches and talented players involved in this affair, and a system that prizes athleticism and seeks simplicity always has explosive potential at a talent goldmine like Ohio State.