BYU deserves to be included in the new SEC, ACC schedule plan

Potentially having to play fewer games against the SEC and ACC would hardly be the end of the world for BYU football. But it would be a sign that certain powerful people in college football don't know much about the Cougars.

Share All sharing options for: BYU deserves to be included in the new SEC, ACC schedule plan

The SEC and ACC are moving toward football scheduling systems that require their teams to play eight conference games per year, plus one game against a team from another power conference. Both conferences also count independent Notre Dame as an opponent worthy of meeting that benchmark.

This changes nothing for the eight teams from the two conferences who already play annual rivalries amongst themselves. It changes very little for ACC teams during years in which they'll draw Notre Dame anyway (the Irish's ongoing three-year cycle around the conference begins this year). It won't change much for most anybody, except an Ole Miss here and an NC State there.

One school it might change things for is BYU. The Cougars, who went independent in 2011, are still learning how to patch together series against teams with conferences of their own in order to make decent schedules. And they've done a good job of it -- 2014's path includes Texas, two other power-conference teams, and four or five potential mid-major conference champions.

But if the SEC and ACC decide not to grant BYU the scheduling status of Notre Dame, the Cougars become less desirable opponents and will have a harder time filling up their dance cards (not a terribly harder time, since BYU rarely plays east-of-the-Mississippi teams, but it's the principle of the thing). I don't know what a "dance card" is, but I'm already tired of saying "schedule."

BYU is meeting with the SEC to try and avoid that, while the ACC has somehow yet to think about it. [Update: The ACC has ruled BYU out.]

To be clear, BYU's leaders brought this upon themselves, in part. They chose to go independent in order to make money, increase exposure and give themselves flexibility. They couldn't have known that the College Football Playoff and alarming college football attendance trends would drive the five power conferences to step up strength-of-schedule efforts, but they knew there were risks.

Still, the implication is that BYU isn't a challenging enough opponent, and that it's not as worthy as the worst power-conference teams. That's absurd.

Counting Notre Dame, there are currently 65 power programs, as recognized by the SEC and ACC (and by the Playoff committee, considering the Irish's deal with the ACC's Orange Bowl).

Of those 65, 24 claim no national championships, and 30 have never won a Heisman Trophy, while BYU has one of each. That might be part of why this has, uh, me so worked up -- excluding BYU feels like something that would be done by a person ignorant of college football history.

The Cougars have an all-time record of .500 or better against 18 of the 42 power-conference teams they've played, including a 3-1 mark against Texas, the country's most advantaged program. Those aren't incredible numbers, but they clearly set BYU apart from the worst power-conference teams, let alone the mid-majors.

In three years of independence, BYU has beaten six teams currently in power leagues, including Texas. In the last 10 years, that number climbs to 19, including Oklahoma. In the last 25, they've beaten 44 power-conference teams, including SEC-approved and ACC-partnered Notre Dame, twice.

The Cougars have more all-time wins than 11 AQ teams (including Florida State, Louisville and Kansas State). It would be more, but they began playing football in 1922. Their all-time winning percentage is better than the following AQ schools:

And, sure, BYU racked up wins in the WAC and other lesser conferences, but come on. Rutgers is considered a worthy out-of-conference opponent despite being forever mediocre in the Big East and its ruins (after 122 years of independence). Louisville was in Conference USA 10 years ago. Pretty much everybody has had the chance to pile up wins in weak leagues. 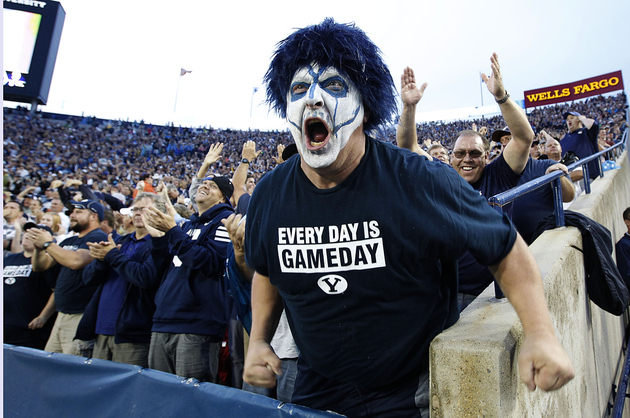 BYU football attendance grew in 2013, and ranked ahead of 37 power-conference teams. Based on the 247 Sports Composite, BYU has outrecruited 10 of those teams over the last five years. Football Study Hall's advanced stats rank BYU ahead of three dozen power teams over the last four seasons. BYU has more all-time bowl wins than 29 such programs, including Oregon. And Bill Connelly's 2014 projections see the current Cougars team as better than 35 of them.

None of this is to say that BYU is regularly on par with Alabama or Ohio State. But good luck arguing that Iowa State, Purdue, Wake Forest, or at least a dozen other power-conference teams are worthier opponents than BYU. That those schools happen to be lucky enough to play in conferences that have been granted elite status makes them elite programs in name (and revenue and branding and status ...) only.