Forecasting the future of college sports, if O'Bannon beats the NCAA

That big trial on the entirety of college athletics we've been talking about for four years? It's really happening. This summer. So what might be about to change?

Share All sharing options for: Forecasting the future of college sports, if O'Bannon beats the NCAA

When it comes to the NCAA's preservation of amateurism, the two sides of the debate have come to common ground on only one conclusion: the O'Bannon and Kessler lawsuits have the potential to blow the whole system up.

Of course, people have varying opinions on whether that's a good thing, but as is typical any time there is major change, it's an exaggeration. College sports will not cease to exist. There's too much money at stake, and there are too many people with vested interests. Successful markets don't just disappear.

But what will actually happen? We've yet to get a good answer. The NCAA has passed off catastrophe as the only possible outcome, and while that's absurd, its opponents have not done a good job explaining what a new system would look like.

Now that the O'Bannon judge has denied one of the NCAA's major talking points once and for all, and as the case moves toward trial on June 9, change is becoming more and more likely.

Nobody can give an exact picture, but we have clues about what might happen. Here's a look into what we might see in an amateurism-less college system.

The formation of a union

Even if O'Bannon and Kessler win their antitrust lawsuits, there's unlikely to be a full free market. The NCAA will likely get an antitrust exemption and be able to enforce price caps and restrict licensing in some ways, as long as it negotiates with the players. Professional sports leagues have these exemptions, as long as they negotiate.

The NCAA will come up with a collective bargaining agreement with the players.

This is not a free-for-all. The NCAA will come up with a collective bargaining agreement with the players that will change the NCAA's current model, but, like in the NFL, this will not result in a total free market. Here are some possible inclusions in the CBA:

The recruiting rules remain the toughest to figure out, though in one way they're the least consequential. No matter what the compensation cap is, players are still going to go to the best and richest schools.

Bomani Jones: How will the Playoff help players?

Fans wanted the College Football Playoff. What's it going to do to make things better for athletes?

Bomani Jones: How will the Playoff help players?

But for the sake of reviewing what would happen in the NCAA's "worst case scenario," let's assume there is no cap — if nobody knows how much players are worth to the schools, why not let the market decide? Remember, this might actually help competitive balance:

Right now, coaches don't have anything to lose when they offer scholarships. There are rules against oversigning, but oversigning still happens. School X can offer a three-star recruit a scholarship as an insurance policy, then drop that player from the team if all the five-stars pan out. However, if School X were forced to get in a bidding war with School Y over the recruit - and it's a recruit School Y really wants - then School Y could offer more money to the player.

Some players might be offered a lot of money, while some might only get a scholarship. It's conceivable that some schools will grossly overpay at first, but when they realize they can't pay the bills, they'll correct and the market will figure itself out. The system holds true even if there is a cap. Just like in the NFL, teams that waste their whole caps on a few players will struggle on the field.

There's a chance this could all be negated if Title IX disallows it, though there's reason to believe players being offered different amounts of compensation above a scholarship would not invoke Title IX. 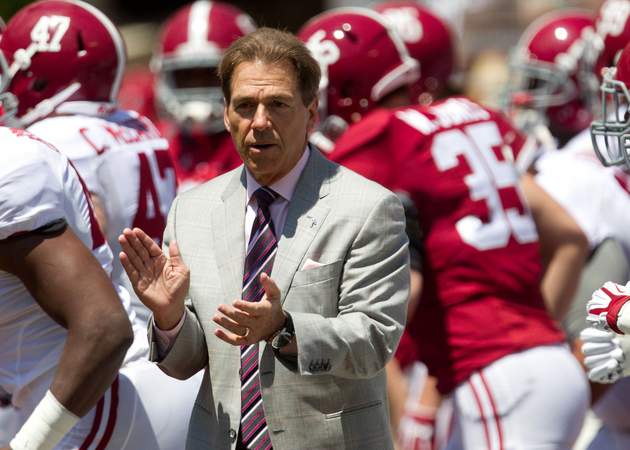 Guess what? There's no system that will keep all the best players from going to the biggest programs. They already do. Marvin Gentry, USA Today

An unregulated booster market wouldn't destroy competitive balance, because players are going to be worth more to some schools' boosters than others. That might even be the best option.

And if the NCAA wanted to regulate this, it could. The answer? Treating boosters similar to how the NFL treats agents.

The NCAA could make all potential boosters register and essentially provide endorsements for players: sign with School X, and you'll get $50,000. It would be a contract that could include conditions like services provided (commercials for businesses and so forth). Each booster would have a limit to spend each year, like campaign finance limits.

To enforce the registration process, the punishments would have to be harsh — a year without pay, potentially. Considering legal compensation would be allowed from both the school and boosters, it would be an enormous risk for a player to take money from an unregistered booster.

What would happen to non-revenue sports?

There's a fear that schools will drop their non-revenue sports if they're allowed to get into bidding wars for football players. But there's one very obvious reason to believe the cuts will come from elsewhere: schools already offer more non-revenue sports than the bare minimum required by Title IX. That's because schools genuinely enjoy being able to brag about providing opportunities.

If the NCAA wanted to make non-revenue spending part of its argument in CBA negotiations, it certainly could. But that probably won't even be necessary. If Ohio State wanted to drop rifle (current rifle national champion: West Virginia) right now and improve its football facilities, it could, but it chooses not to. When you consider that some schools are netting $30 million revenue increases over the course of a decade, it's unlikely the Buckeyes would need to cut rifle even after increasing player compensation.

The most likely cuts in non-revenue sports will come in team expenses, not scholarships. As Yahoo's Dan Wetzel argued, it makes no sense for swim teams to be traveling across the country for meets. We're more likely to see a return to regional schedules for non-revenue sports.

If the NCAA loses its antitrust cases, it's going to have to negotiate. Those negotiations could be drastically different than this forecast. Maybe outside compensation rules will be much more restricted, but players will get a bigger cut from licensing. Or maybe there will be a free market for outside compensation, but schools will get a larger cut of licensing revenue. Nobody really knows.

But here's what we do know: if players are allowed to negotiate for more money, and schools and boosters are allowed to pay recruits, then no matter what the specifics of the CBA are, the best players will go to the big schools. Football will drive financial decisions, and boosters will want to do everything they can to help their school win.

That sounds a lot like what we have now, except the players — the primary revenue-generators — will be getting fair market value. Not quite the explosion we've been warned of.