Still comin' to your city: Inside college football's national anthem

That Big & Rich music video you say you can't stand, but still watch on ESPN every fall Saturday? It has to be recorded somewhere. That somewhere is Tennessee in May. (This story was originally published in 2014.)

Share All sharing options for: Still comin' to your city: Inside college football's national anthem

The original version, without all the football.

At the moment, the "zing" and the "zang" are not matching up between the live action and the audio. Consequently, the "ting" and the "tang" aren’t either. It makes sense, once it’s explained, that when shooting a music video, rapping is much harder to sync than singing. There's a decision amongst the producers to break for lunch and resume with rapper-specific coverage shots afterwards. The extras wander off to drink bottled water in the shade.

"Gets. You. Fired. Up.," says the middle-aged man with the lit cigarette. He had the bad luck of forgetting to bring any of his Clemson gear to "rep on TV."

He answered the email a friend forwarded him. Sixty bucks for a day's work as an extra.

He repeats himself with a broad smile.

A version of the theme song from a recent season.

A pair of Alabama students, Shelby and Alex, had nothing better to do between the time they finished final exams and Alex drove home to Michigan, so they came up for the day.

Every Saturday, you settle in to watch "GameDay," a perfectly orchestrated live production. But 70 lunatics must work insane hours and travel long distances to make it all happen.

Set to Jim Ross, of course.

"I mean, you see 'College GameDay' every Saturday. We thought it would be fun, plus we wanted to rep Alabama," says Shelby, a communications major at Bama. "We figured there would be a lot of Tennessee fans here."

"Yeah, they're... see, way over there," he says, pointing a location at the far end of the crowd. It's worth nothing that, through entirely natural self-segregation, the Alabama and Tennessee fans have distanced themselves as far away from one another as possible.

"Of course a few [Alabama fans] show up," says one of the way-over-there Vols. "That's okay. We got the cheerleaders."

The cheerleaders are actually the University of Tennessee dance team, the national title-winning UTDT, as they're described by their coaches. They responded to ESPN's request, with the caveat that the girls dress in non-school-affiliated gear.

I'm also informed UT provided the dancers for Hank Williams Jr.'s famous "Are You Ready for Some Football" video introduction for "Monday Night Football" years back, which was also shot in the greater Nashville area. If you need a music video montage to hype a football institution, this here's the city, apparently.

"I'm not sure exactly why that is. I guess this being the home of country music helps," John Rich says.

"It's because people enjoy getting wild, and this a town to have a good damn time in!" Big Kenny follows.

You know the words to Big & Rich’s 2005 single "Comin' to Your City," even if you're a self-serious music fan who likely once hated the song. Like, really, really hated it.

And maybe you still do, but you really don't. After a decade as the anthem of "College GameDay," it's as much an American folk anthem as "Seven Nation Army's" zombified stadium chant.

You know all the words to all the verses even though they change every season, because sometimes they feature your favorite college football team, or the one you hate, or both. You especially know all the words that aren't even words, that famous honky patois you and your friends now recite in a social media battle cry every Saturday morning.

If you want a little bang in your yin yang

If you want a little zing in your zang zang

If you want a little ching in your chang chang, come along

And even if you claim to hate ESPN because it's a soulless conglomerate hellbent on owning all of sports or whatever, you really love "College GameDay." It's a deep and abiding love, and it's well earned. "College GameDay" is ESPN at its best. The network flexes its influence and coffers to provide us with hosts who blend insight with rapport while afloat in real, live seas of fanaticisms. Best of all, it's programming built with the purpose of raising up a sport most often referred to as a true religion. It's why Alex and Shelby drove four hours, and it's why executive producer Lee Fitting is standing on set just hours after having accepted an Emmy win for "GameDay" the night before in New York.

Smoke machines blast. The song concludes. And as the crew and talent immediately scramble for another full take, Fitting defends "City's" mainstay prowess on the show.

"I can't really explain it. It's one of those things that we really liked at the time, and we just rolled with it and kept our fingers crossed. As it picked up steam, we tried to tweak it and help evolve it."

If you need a music video montage to hype a football institution, this here's the city, apparently.

So no, there isn't a dubious licensing arrangement (or ransom) that's kept the song around for a decade.

"Every single part of the show goes under the microscope after each season. We're always trying to improve things. We wouldn't change it just to change it. Right now, we feel like it's still rolling. We can go to Fargo, North Dakota and people are screaming about 'Coming to your cit-ay,' and it's the same with South Central Los Angeles," Fitting said.

You will have another season of "Cit-ay," although with a few extra wrinkles added to the customary team shout-outs that Rich and company re-write at the behest of ESPN each season. They are as follows:

And if that sounds like it was a focused-grouped decision, it probably is, but maybe that's the joy of licensing from Big & Rich: tack on an extra rapper and a fuzz pedal to "City," and it's not like you turned "Sunday Morning Coming Down" into dubstep.

"We're all for it," Rich says. "We've always viewed the Muzik Mafia [the duo's collective of fellow artists] as having strains of rock and rap and country, from all genres of music. That's like football fans. Football fans come from all walks of life." 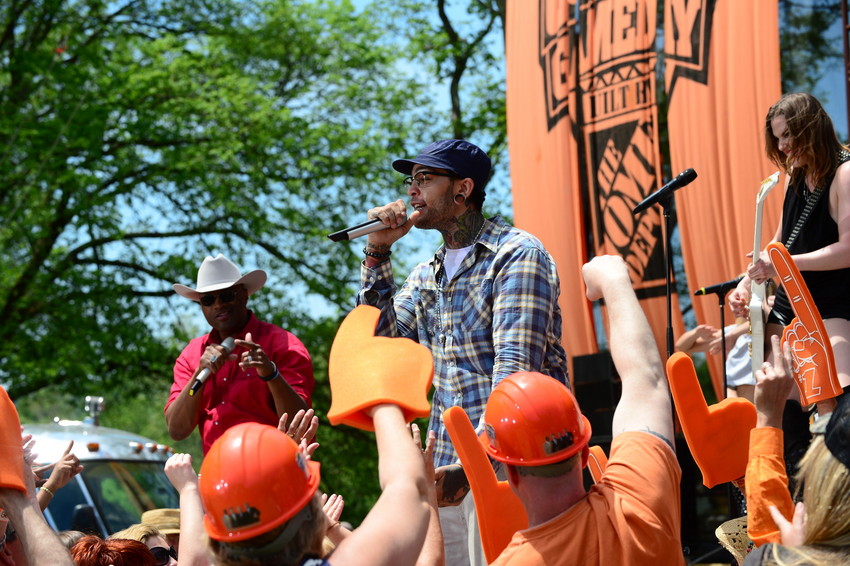 McCoy, one of the song's two new performers.

"GameDay" almost entirely defines the national perception of his music. Rich doesn't offer a hint of indignity about this.

"Look, a lot of people don't know "A Country Boy Can Survive," but they sure know [starts singing] "Are you ready for some foooootball?" We never thought we'd be doing this, right now, 10 years later. We owe ESPN thousands of bar tabs in airports or hotels when people ask who we are. We start naming hits, then we say 'College GameDay,' and bam, everybody lights up and buys us beers."

Rich is a lifelong Texas fan, while Big Kenny claims allegiance to "any Virginia team, but just any team out there doing well, man. I like to ride the wave." Cowboy Troy is a Dallas native and a Texas graduate who steers an otherwise informal conversation into a serious discussion of Charlie Strong's team management style.

"It's really going to be interesting, honestly," he says. "I've heard from a discipline standpoint, the first time any player misses a single class or study hall, he runs until he's exhausted. The second time he misses, his entire position group has to run until they're exhausted. And then if there's a third time, at least from what I've heard, the player, the position group, and the position coaches have to run."

"And if he misses four times, they just shoot him," Rich says.

Behind a barrier, the extras are re-upping on gloss. The dance team re-applies makeup and re-curls hair, to combat the May heat. A makeup artist repaints the individual letters in "GAMEDAY" on the stomachs of dazed-looking extras.

"I had no idea I was gonna take my shirt off today," one tells me. "I just graduated from MTSU last week. I figured this was something to do. I mean, I'm cool with taking my shirt off," he says to the stranger painting over his belly button hair.

The smoke machine sets off again, the song plays again, and the intricacies of staccato rap and carefully placed team references are tracked. On the monitors, it all reads as slick and big and ridiculous, and yet the effect is undeniable. Seventeen takes in, the FSU fan still jumps, and the song you probably used to hate by that band you may never listen to otherwise elicits a perfect, pure Pavlovian response.

Squint. It's October, and Chris Fowler is setting a scene against the most famous fiddle solo in modern America. It gets you fired up, man.