The big 2014 Tulsa football preview: Can another great D prop up another bad O?

Tulsa's offense began to crack in 2012 and completely fell apart in 2013; it was the primary source of a collapse to 3-9, and despite what should be an outstanding defense, it could hold the Hurricane back their first year in the AAC.

Share All sharing options for: The big 2014 Tulsa football preview: Can another great D prop up another bad O?

In theory, this sort of thing happens, especially with programs in parity-heavy leagues. Tulsa recruited about as well as most of its Conference USA brethren, and when you've got the same level of talent, your record can slip or rise from year to year based on experience, injuries, luck, whatever. Occasional bad seasons happen to most.

But wow, did things fall apart for Tulsa in 2013. Even if it's just temporary, the magnitude of the tumble is worrisome. The offense fell from 59th in Off. F/+ in 2012 to 110th. The defense fell from 27th in Def. F/+ to 53rd. Even the special teams fell apart, from 75th to 113th. Tulsa couldn't pass and couldn't generate any big plays on the ground. The aggressive Hurricane defense suffered a lot more breakdowns than it had in previous years. Field position was mostly disastrous.

Injuries and personnel issues certainly played a role. Quarterback Cody Green was barely full strength, the receiver hierarchy shifted a few times, and the starting offensive line changed five times. Only two primary defensive linemen and two linebackers played in all 12 games. Plus, starting safety Demarco Nelson missed the season because of academics. Tulsa really never had its intended top 22 on the field in 2013.

Still ... F/+ rankings go back to 2005, and this was easily the worst Tulsa team in that span. The Hurricane had only once ranked worse than 56th, and they ranked 94th. How long will it take them to bounce back? Will they bounce back?

And now Tulsa joins a better conference. Granted, it's not a 15-story leap by any means -- the AAC is basically a slightly super-charged version of the pre-2013 Conference USA -- but it's better than Conference USA. Tulsa is taking this step up a year after putting its worst team in quite a while on the field. This isn't optimal.

Is there any chance the Golden Hurricane can right the ship despite the competition upgrade? Possibly, though it does take quite a few ifs.

...then Tulsa could at least climb back into the 70s or 60s, maybe higher. But give me five ifs, and I can make just about anybody pretty good.

For the first time in quite a while, Bill Blankenship and the Tulsa football program face the burden of proof. How will the Hurricane respond?

3. Basically the same team all year

No matter who was or wasn't playing in a given week, Tulsa was basically the same team. There were particular duds, especially the season-ender against North Texas, but from month to month, the averages stayed basically the same.

Again, this isn't particularly encouraging. It's not as if things fell apart when this or that player went down. Tulsa just wasn't very good in 2013.

More encouraging: Tulsa was very, very young on defense. As has been the case under Blankenship, the defense wasn't too bad in 2013, and it should become a strength again this fall. But ... the Hurricane still have to play offense, too. 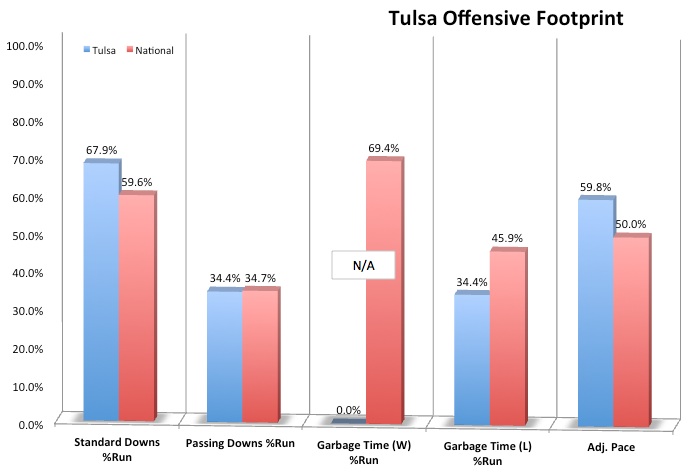 Cody Green was injured and just plain ineffective throughout the season. In the end, he basically split the year's snaps with then-freshman Dane Evans. Tulsa's offense is very much an efficiency-first approach -- and there's certainly very good reason to focus on efficiency -- and among other things, the Hurricane's quick-passing approach keeps sacks and negative plays down. In 438 pass attempts, Tulsa quarterbacks were only sacked 10 times. But efficiency offenses obviously work best when the skill position talent is able to randomly break a big gainer, and Tulsa managed only 12 30-yard gains all year; only Miami (Ohio) had fewer.

Without big plays, Tulsa was forced to dink and dunk for eight to 10 error-free plays at a time ... and there were far too many errors. Evans was interception-prone (a five percent interception rate is far too high, especially considering the length of the passes), and only running back Trey Watts (38 percent Opportunity Rate, 65 percent catch rate) was anything close to reliable.

Watts is gone, and the starting quarterback job appears to be Evans' to lose. Tulsa needs to do him more favors, either from an efficiency standpoint or via more frequent big plays, and it's not immediately obvious how that's going to happen.

The collapse of the Tulsa offense actually began in 2012; Green wasn't an efficient enough passer for an efficiency attack, and the Golden Hurricane's rushing options were either all-efficiency Alex Singleton or all-or-nothing Watts or Ja'Terian Douglas.

Considering Tulsa had to replace three good offensive linemen and Singleton, it was certainly conceivable that the Hurricane would regress on offense again. And they did. But the way it happened was strange. If anything, the line improved. But Green was less effective and less healthy, and Evans was far too mistake prone. Watts and Douglas both did far less with the open-field opportunities they got, and after a disappointing few games, potential leading receiver Keyarris Garrett was lost with injury.

After disappointing final seasons, Watts and Douglas are both gone. So are two of last three's top wideouts. (Well, "top." They were targeted the most, but they certainly didn't do much with the targets.) For better or worse, Tulsa is going to have to lean on a new cast of skill position characters, even if Garrett is back to his 2012 form -- he caught 67 of 121 passes for 845 yards that year (not great, not terrible).

New blood probably isn't a bad thing, and there are certainly quite a few former three-star recruits in the mix for playing time. James Flanders finished the spring as the No. 1 running back. Keevan Lucas was actually the best wideout on the team (on a per-target basis) as a freshman. And Garrett aside, there are three former three-star recruits jockeying for position in the receiving corps. There are options, and almost none of them have proven anything.

For the second straight year, offensive line coach (and offensive coordinator) Denver Johnson has to do some rebuilding up front. He had to replace three all-conference starters in 2013, and he's got three more spots to fill atop the depth chart this time around.

Again, this worked out pretty well last season; Stetson Burnett came up big at right tackle, and the line succeeded in both pass blocking (not hard, given the quick passing) and short-yardage rushing situations.

Three players with starting experience do return (29 career starts), but we'll see if Johnson can craft another solid line with another level of depth skimmed off. 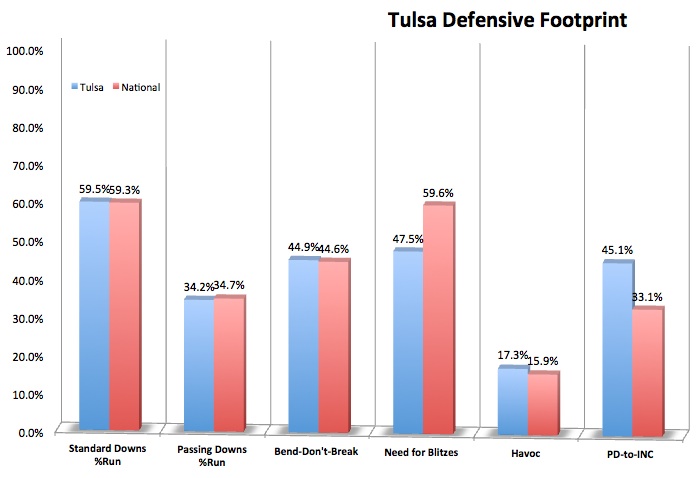 For a few years now, Tulsa has had one of the more entertaining, aggressive defenses in the mid-major universe. The Hurricane are unafraid of allowing some big plays in the name of forcing turnovers and three-and-outs, and they're pretty good at it. Even in 2013, when the overall product regressed, the style was similar.

So why did the product regress? A couple of reasons. First, the defensive line had no choice but to regress. Tulsa ranked 37th in Adj. Line Yards and third in Adj. Sack Rate but lost all four starters and the most successfully aggressive linebacker (DeAundre Brown). There was no way to avoid regression, and sure enough, Tulsa fell to 76th in Adj. Line Yards and 32nd in Adj. Sack Rate. That's still pretty decent, but not great.

Accordingly, the rest of the defense regressed by a similar amount. With freshman cornerbacks and a less effective pass rush, the pass defense regressed from 28th in Passing S&P+ to 58th, which, again, is pretty decent (especially with the youth in the secondary) but not as good.

Whereas there was quite a bit of turnover in 2013, there's almost none this time around. That should mean the return of the Very Good Tulsa Defense.

One of Tulsa's bigger issues in 2013 was that the front four just wasn't very big. With quite a few freshmen, redshirt freshmen, and sophomores in the rotation, there were quite a few players that just hadn't been in the weight training regimen quite long enough. Tulsa was quick enough to rank 36th in Stuff Rate (run stops behind the line), but the line got pushed around terribly in short-yardage situations.

That might not be as much of a problem this time around. Upperclassmen like Derrick Luetjen and Brentom Todd are listed five pounds heavier than last year, but the tackles have taken off: Jesse Brubaker has gone from 275 to 285, Jerry Uwaezuoke has gone from 278 to 295, and Hayden Carman has gone from 274 to 288. We'll see how this impacts quickness and negative plays, but in theory, getting pushed around won't be as big an issue.

With Demarco Nelson returning to the fold, Tulsa basically has five returning starters in its four-man secondary. And in all, there are 34 returnees listed above and only three departures. That's ridiculous. Tulsa has four cornerbacks who combined for eight interceptions and 25 break-ups last year, and after featuring four freshmen in its top eight last year, Nelson's return means there are now three seniors on the tw-deep alongside the youngsters.

Bill Blankenship's ability to turn his program back around and once again threaten for bowl eligibility despite the conference upgrade will depend on how well the Golden Hurricane stock up on wins early in the year. Three of their four lowest-projected opponents come in the first four games, and a 3-1 start could set the table for a decent year.

Because of the defense alone, I do see pretty decent improvement in store for this Tulsa team. With reasonable injuries luck, this bigger, more experienced defense could quite easily end up back in the top 40 in Def. F/+. But Tulsa's fate rides on its offense; it struggled two years ago and completely fell apart in 2013, and it must rebound despite the loss of three offensive linemen, two running backs, and two of last year's top three receivers. There will be a lot of pressure on quarterback Dane Evans to not only play well but make plays, and he'll have to find those plays among a rather young supporting cast.

That's not a very good recipe for improvement, and it will probably hold the Golden Hurricane back in 2014.