In April, when the NCAA changed its policy to allow for unlimited meals, college coaches championed it as a success for student-athletes and as a potential benefit in recruiting. But for Air Force head coach Troy Calhoun, it was just another reminder of what he's up against.

"That doesn't pertain to us," he said of the new rules.

Calhoun isn't bitter about the rule change. He knows it benefits athletes at most schools and that it's necessary in a world more focused on player welfare. And he knew in 2007, when he took the Air Force Academy job, that he was signing up for one of the three toughest jobs in college football.

With these restrictions, among many others, it's a shock that America's service academies can win any games in the top subdivision of Division I. Because to win games, you have to recruit good players. And finding good players with those restrictions is improbable, at best.

How do service academies recruit?

I posed that broad question to Calhoun, and his answer started out simply enough: "I don't think our process is different than anywhere else," he said.

On the surface, that's true. Calhoun and the coaches at Army and Navy go out in search of the best football players in the country to come to their schools, just like the coaches at every other Division I program. But it comes with a caveat: "just, the filters that are involved are a lot stronger."

Just a few of those filters:

Apply the academic filter, and suddenly the pool of prospects shrinks. The academies are forced to recruit similar kids as Stanford, Duke, Northwestern, and the Ivy League schools, yet none of those schools have to also worry about the additional filters of weight limits and mandatory military service. 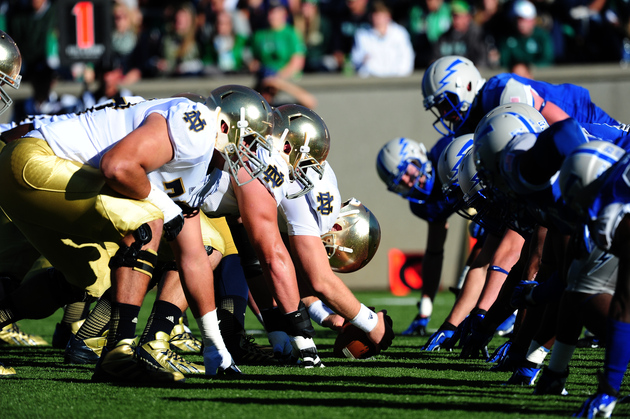 The result is a national recruiting plan.

"I bet out of our two-deep, we might only have two that are even from this time zone," Calhoun said. "Which, that is really absurd."

That sounds really nice: "we recruit nationally." After all, that's what powerhouses like Notre Dame pride themselves on. However, Notre Dame recruits nationally because its name has enough cachet to pull players from anywhere; the Irish don't have to just stick with the players in the Midwest. The academies recruit nationally out of necessity, because they could barely fill out a team if they recruited their geographic regions.

Even with a national recruiting plan, the academies rarely beat out major-conference teams for players. And as Navy head coach Ken Niumatalolo pointed out, even many lower-level FBS players think they can go to the NFL. Whether that's true or not, it cuts the service academies out of the picture for those players as well. So they tend to recruit against each other, FCS schools, and maybe a MAC school every once in awhile.

Monken arrived at Army from FCS Georgia Southern this year, and even though he jumped up a division, it might be tougher to get players now.

"I think the service academies are the most difficult places to recruit to in the nation," he said.

The academies are the most difficult places to recruit to in the nation. -Army head coach Jeff Monken

The recruiting rankings back that up. According to 247 Sports, Air Force was the top-ranked service academy in 2014, finishing 109th nationally. Army and Navy were 121st and 129th, respectively, finishing among a group of FCS and low-level FBS schools. Only 10 of their collective 58 commits received three-star ratings. Star ratings matter for football success, so the coaches at service academies need to be creative in their recruiting approaches.

Since there is so much information in recruiting these days, the academies can't really rely on fellow coaches to miss ready-made prospects. Instead, they take chances on players they hope to develop.

Niumatalolo said his staff will look to identify undersized offensive linemen, corners with 4.6-second 40-yard dash times, and small defensive linemen who could turn into linebackers. It's an exhausting process, but if coaches look hard enough, they can find enough players who fit the very specific profiles. Once they find those players and get them to campus for official visits, Niumatalolo claims 90 percent of them end up committing.

"Since we recruit all 50 states," he said, "I believe there are enough student-athletes out there that have good grades that are willing to serve their country after."

Adapting to the recruiting filters

The physical requirements at the service academies dictate their on-field style. All three are known for running option offenses. Navy, in particular, has become famous for perfecting the flexbone triple option. Former Navy coach Paul Johnson brought it to Georgia Tech with some success, with Monken a former assistant.

Because the academies can't have big offensive lines, they rely on athletic linemen and option misdirection to create running lanes and open up the field. The Midshipmen won a game in 2011 without completing a pass, as did Monken's GSU against Florida in 2013. In the past six years, all three academies have ranked in the FBS top four in rushing attempts per game, along with Georgia Tech.

1944: The original game of the century

With the country at war and the dominance of the service academies over the rest of college football, the 1944 Army vs. Navy game was one of the most anticipated matchups in the history of the rivalry.

Veterans explain how much it matters

Nastinchka •Every Day Should Be Saturday

"As soon as you start as a student, you learn one thing: beat Army."

1944: The original game of the century Veterans explain how much it matters

Even though the linemen are small, they aren't nearly small enough to graduate within the requirements. That means they have to lose enormous amounts of weight between the ends of their senior seasons in December or January and graduation ceremonies in May. Niumatalolo said Navy routinely has players drop from 280 pounds to 220 or 230 in order to complete the fitness test of running a mile-and-a-half in 10 minutes and 30 seconds.

Niumatalolo said it's "not ideal," and it can be unsafe if not done properly, but the team has dieticians to ensure players are as healthy as possible about the way they lose the weight. They can burn some of it by not doing any heavy lifting.

The coaches at the academies also have to deal with military training interfering with football training. Calhoun said his players cannot do summer training like their Mountain West Conference foes, because they have basic training and other mandatory summer service while they are in school.

There have been some minor concessions. At Navy, the skill position players still have to undergo fitness tests each semester like all other students, but the linemen are allowed to do a bike test instead. At Army, Greene said the summer training schedule has been adjusted so football players aren't as restricted by their military obligations.

Still, minor concessions aside, the military does not adapt for the sake of football. It's always the other way around.

A relic of college football's past ... but still winning

America's service academies haven't always been the underdogs. Army won three national championships in the 1940s, while Navy won one in 1926. The schools have five Heisman Trophy winners among them.

These schools have tradition to rival some of today's powerhouses, but they're fit for the old brand of college sports, not the current culture that values athletics as its own industry, not just part of the college experience.

Navy routinely has seniors who drop 60 pounds in under six months for graduation.

At the academies, athletes go to school with a commitment to a non-athletic career after college and play sports as a co-curricular activity. Even at the most academic-minded schools like Stanford, Duke and Northwestern, many players go to school for football with the dream of making it a career.

Schools playing by this egalitarian set of rules from the NCAA's days of old should not be able to compete, but by a combination of their systems and their player development, they do.

Calhoun returned to Air Force to coach his alma mater after spending a year as offensive coordinator of the Houston Texans, in part because "I wanted to see, playing in a major conference (the Mountain West), if there were some years you could go to bowl games." 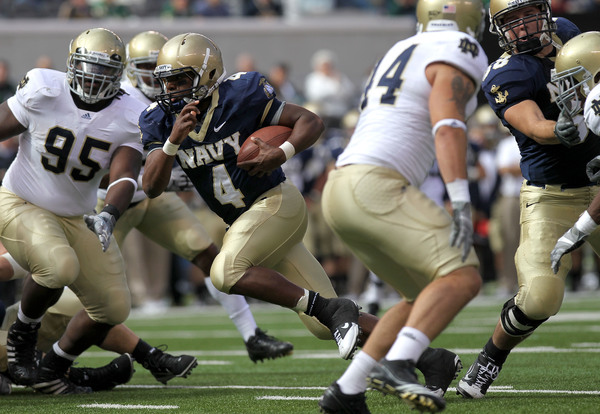 While he admitted it has been "very, very difficult," Calhoun has accomplished that goal. Despite a 2-10 season in 2013, he took Air Force to bowl games in six straight years from 2007 to 2012, winning two of those and beating the likes of Georgia Tech, Notre Dame, TCU, and a ranked Houston team along the way.

Navy has been just as successful. Niumatalolo has taken the Midshipmen to five bowls in six years, and he has a 10-win season and two 9-win seasons two his name. In that time, his program has beaten Notre Dame twice (once at South Bend when the Irish were ranked), Wake Forest twice (once when the Deacons were ranked), Indiana twice, Pittsburgh, and Missouri.

Winning is the goal, and the coaches at all three academies believe they can win every game on their schedule. But when those coaches set out to find players, they have to keep something else in mind.

"We want tough people to serve our country," Niumatalolo said. "I also feel I have the obligation that we want people to come here that can protect us."

That's not something your average football coach worries about, but it comes with the territory when you take one of America's toughest coaching jobs. And somehow, it hasn't precluded winning.