And also Barry Switzer, who appears on the chart in spirit.

Share All sharing options for: Chart: The 5 most rapped-about college football coaches 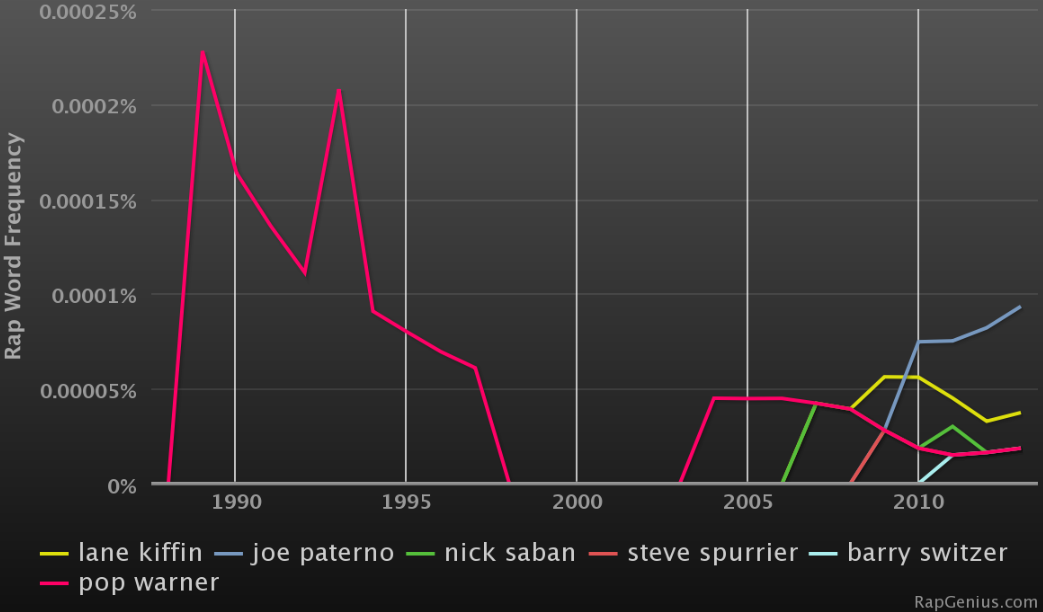 Chart created using Rap Genius' Rap Stats gadget, which charts the appearance of words over time in the site's rap lyrics database. I searched the names of just about every current FBS coach, most coaches with 100 or more career wins, and many noteworthy coaches whose fame crossed over to the mainstream, for one reason or another. Somehow, no rapper has ever used the full name of Arizona State great Frank Kush.

Let's review some of the noteworthy rap lyrics involving each of these five names, along with the mysteriously included Barry Switzer.

Most other rap references to Kiffin center on the fact that he was once the head coach of a team named the Trojans, which is similar to the name of a brand of condom.

And there are obviously several we are definitely choosing not to include here. That Monch line is fantastic.

I'm not finding quite as many Nick Saban references as the chart claims (and I swore Yelawolf has mentioned him before), but a non-Clemson Rick Ross shoutout moves the needle that much, I guess.

Joe Budden (a) loves rapping about football coaches, and (b) wrote a hell of a Nick Saban line. The man went MIA from MIA to take the Alabama job, all after going MIA from LSU. Lil Boosie isn't happy about any of this.

Based on what we've seen throughout, the best way for a college football coach to get rapped about is to change jobs. Spurrier once left the Gators (the Florida Gators, not gator-skinned shoes -- he's more of a barefoot man) to take a job in D.C. for which he lacked experience, then left for South Carolina, you see.

Also, Steve Spurrier would demolish every other coach in any sort of battle rap tournament.

Despite his appearance on the chart, I couldn't actually find any rap lyrics referencing the Oklahoma legend by name. The defiant choice to leave him on the chart was easy, as Barry Switzer should be rapped about.

Likely a controversial inclusion, since few rappers will ever pass along a fun fact about Glenn Scobey Warner, who was last a head coach in 1938. However, the national youth football program that bears the former Georgia, Pitt, and Stanford coach's name is part of his legacy as one of the sport's major early influences, so he's counted.

Consequence, Coolio, Cypress Hill, Defari, E-40, Murs, Mack 10, Pacewon, and Warren G have mentioned Pop Warner football, and not as a wordplay thing, but as an image of youth. As for the wordplay:

Plenty of other coaches have been mentioned once or so (like M. Wade's "I coach killers/ Will Muschamp" and J. Cole's "I'm Pete Carroll/ Left college, and I fucked the pros up"), but as far as I can tell, the five above (and Barry Switzer, if you're a chart) are the five most prominent.

Can you find any more?