A young Houston team benefited from some incredible turnovers luck and almost won the AAC in 2013. Can the Cougars' experience offset regression to the mean in the "lucky bounces" category this fall?

1. Luck was a Cougar

On average, a team will intercept one pass for every four it breaks up in a given season. Houston intercepted almost one for every two (25 interceptions, 55 PBUs) in 2013.

On average, a team will throw one interception for every four it has broken up in a given season. Houston threw one for every 7.6 (10 interceptions, 76 break-ups).

Going by averages, Houston's turnover margin should have been somewhere in the neighborhood of plus-3 or plus-4 last season. It was plus-25. The difference works out to about eight points per game.

Pick your adverb. Houston was absurdly, insanely, hilariously, incomprehensibly lucky last year when it came to the bouncing of a pointy football.

First of all, the luck played a different role than one might expect. Good or bad turnovers luck can often make the difference in close games. Teams with really good turnovers luck often end up with really good records in games decided by one possession. For Houston, though, the bounces simply allowed the Cougars to get closer than they otherwise would have.

Houston did win two rather close games early in the season -- 22-13 over Temple, 31-26 over Rice. But the Cougars actually went 1-4 in one-possession games. They avoided blowouts, sure, but their three-win improvement over 2012's 5-7 campaign was largely based on merit. They beat UTSA, Rutgers, and SMU by an average of 33 points, for instance. Plus, the defense improved dramatically (from 66th in Def. F/+ to 28th) without benefiting from extreme luck. (Most of the luck was on the offensive side of the ball.)

Besides, with the way college football tends to work, success based on luck can still be parlayed into program success. More wins and fewer blowout losses can result in higher morale -- and therefore fewer transfers, more recruiting success, better attendance, and better administrative support. The tide rises and falls based on wins, with minimal regard to how those wins come.

This all puts Houston in an interesting position in 2014. The Cougars' two-year recruiting rankings are the second-best in the conference, behind only USF. They return an intriguing (if lucky) sophomore quarterback, their top three running backs, most of a prolific, rather highly-touted receiving corps, and almost the entire defensive two-deep from a unit that was so strong a year ago. Luck could surge in the other direction, but experience, talent, and athleticism could offset those effects to a large degree.

Lucky or not, Houston almost stumbled into a conference title in 2013. Despite freshman John O'Korn taking the reins at quarterback early in the season, the Cougars began the year 7-1 with only a shootout loss to BYU marring a perfect start. While the focus of the AAC title race was centered on UCF and Louisville (and justifiably so, as those were easily the two best teams in the conference), the Cougars very nearly defeated both the Knights (Houston failed at the UCF 7 with 20 seconds left) and Cardinals (Houston led at halftime and fell by only seven) on the road in November. Alas, they did not, and the results faded a bit afterward.

Luck indeed allowed Houston to keep some games closer than they probably should have; against UCF and Louisville, for instance, opponents picked off just two O'Korn passes while breaking up 17, and Houston recovered all five of those games' fumbles.

Still, this was a salty, resilient team, one that would have beaten an average opponent far more often than not. 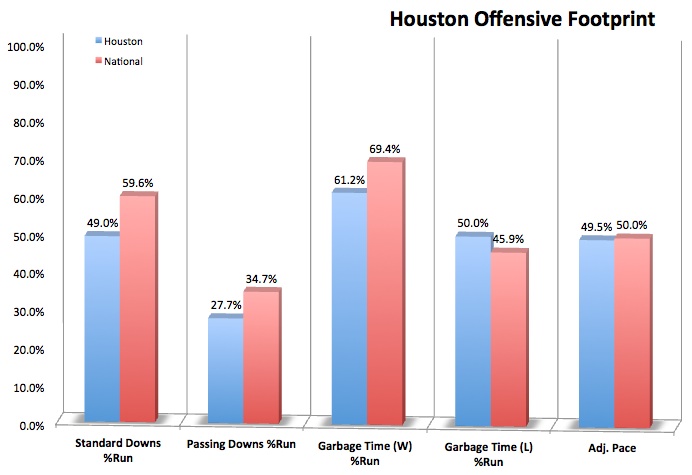 John O'Korn could have very well ended up with 20 interceptions instead of 10 in 2013; he took risks, both of the aggressive and erroneous varieties, and defenders were able to get hands on a lot of his passes, even if they picked off only 10 of 446. The risks were rewarded, in both their lack of negative consequences and their occasionally positive results.

All of last year's big-play targets return in 2014 and will combine with a potentially efficient set of running backs. The Cougars ranked fourth in IsoPPP+, which measures the magnitude of Houston's successful plays and adjusts for opponent. There weren't quite enough successful plays, but they made the most of the ones they had.

Still ... he was lucky as hell. And he faded down the stretch. Dramatically.

Opponents adjusted, as they are wont to do, and the schedule was back-loaded with solid defenses. O'Korn struggled to adapt.

Expectations for O'Korn in 2014 are a nice game of Optimist vs. Pessimist. An optimist can simply point out that he survived as a true freshman and thrived at times, and he'll have one of the best, most athletic mid-major receiving corps in the country at his disposal, not to mention two former three-star running backs who were at the very least decent at eating up four or five yards on first down.

The pessimist sees a potential explosion in the interceptions category, both because of last year's luck and the fact that Houston must replace four linemen who had combined for 85 career starts, including all-conference tackle DeAnthony Sims and nearly three-year starting guard Kevin Forsch.

You could talk me into joining either of those camps. And at the very least, there are some potentially solid backups in place if O'Korn goes off the rails. Kansas State transfer Billy Cosh could be ready for a go-round, and freshman Bear Fenimore was in for spring practice.

The receiving corps is led by former star recruit Deontay Greenberry, but each of the top four returnees had at least one 100-yard receiving game. Greenberry had five in the first eight games (peaking with an eight-catch, 168-yard performance against Rutgers) before fading a bit, Daniel Spencer had four (a combined 13 for 303 against BYU and Rutgers), Xavier Maxwell caught five passes for 136 yards against BYU, and former five-star USC signee Markeith Ambles lit up Vanderbilt for 106 yards in six catches.

The big plays are there for the taking with this unit, especially considering Shane Ros (14.7 yards per catch in 2012) returns to the fold after a 2013 knee injury. But Houston was lacking in the mundane plays last fall, and the Cougars' efficiency simply wasn't where it needed to be. Big plays can bail you out, but three-and-outs will eventually defeat you. Someone in this unit -- sophomore Greg Ward, perhaps? -- will need to provide a reliable target near the line of scrimmage. 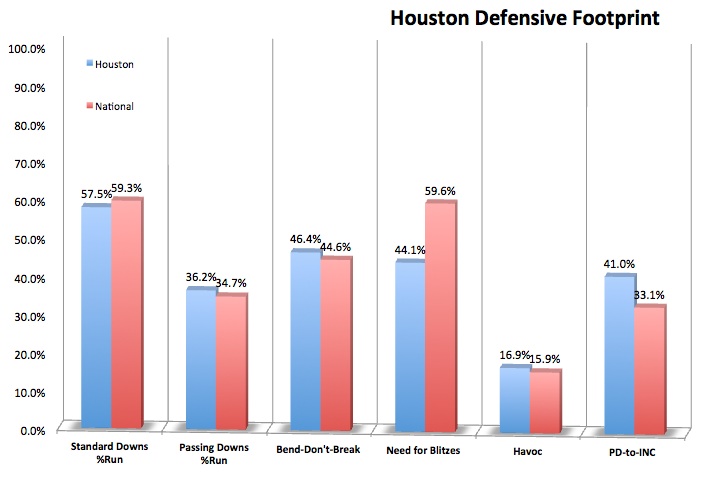 Five different Houston linemen ended up with at least 2.5 sacks. All three starting linebackers had at least 10.5 tackles for loss. Five Cougar defensive backs defensed at least eight passes. At first glance, it appears Houston's defense was the same kind of attack-and-pray-you-don't-give-up-a-long-touchdown unit it had been in the past, when it ranked second in the country in TFLs in 2011 while ranking just 60th in overall Def. F/+.

That wasn't actually the case, however. New defensive coordinator David Gibbs crafted strong defensive improvement through bend-don't-break means. There were some individual play-makers, but the Cougars' strength came mostly from when they made the plays. Houston ranked 41st in IsoPPP+ while allowing a lax 42.0 percent success rate, but the Cougars allowed just 3.5 points per trip inside their 40-yard line, ninth-least in the country. Granted, the schedule didn't feature a lot of offenses with particular red zone skill, but Houston was able to mitigate damages, avoid big plays, and eventually make a stop.

And if the Cougars can unearth a couple of new, decent cornerbacks, they could improve again in 2014.

The biggest source of improvement came up front. Houston was willing to give you short passes, but the Cougars were solid at preventing opponents from establishing the run. Only one team all season averaged 5.0 yards per carry (and it was Rutgers in an easy Houston win), while six averaged 3.5 or fewer.

Houston was able to make a lot of plays near the line of scrimmage, and with every lineman and all three starting linebackers returning, not to mention quite a few former three-star recruits, Houston could be even more stout against opposing ground games this fall. When your biggest problem is "the second string linebackers are untested," you're in pretty good shape here, especially considering those untested linebackers were highly touted recruits.

Scan the Houston roster, and you'll find transfers from the following FBS schools: Baylor, Boise State, Illinois, Kansas State, LSU, Oklahoma, Oklahoma State, TCU, Texas Tech, UL-Monroe, and Utah. Head coach Tony Levine has welcomed all comers when it comes to building up Houston's overall athleticism, but it's in the secondary where transfers could have the most direct impact.

The Cougars return all nine non-cornerback starters on the defense, but Zach McMillan and Thomas Bates are both gone. Junior William Jackson does return, but Boise State transfer Lee Hightower and Utah transfer Tyler White could determine whether or not Houston's pass defense takes a step backwards this fall.

The return of junior safeties Trevon Stewart and Adrian McDonald is unquestionably a good thing; they combined for four tackles for loss, 10 interceptions, and 10 PBUs last season, and despite youth they were able to key a defense pretty good at avoiding big plays. Plus, Eric Eiland returns to safety after a stint as a rush end (which gives him a fun "DE/S" designation). But you still need corners.

Houston plays only two teams projected better than 54th in 2014, and even though turnover luck can seep into the F/+ rankings a bit (since drive results are a component of the ratings), the Cougars return more than enough talent and experience to produce another top-50 ranking. That alone says Houston could be in for another solid campaign in Levine's third year.

Still, turnovers could be a concern. The Cougars' defensive play-making will force turnovers, but if opponents start holding onto O'Korn's almost-interceptions, it could turn the tide in quite a few games. Houston will be better overall but might be limited to only duplicating last year's 8-5 record instead of improving on it. There are worse fates, especially considering how many impact sophomores and juniors this team will field.

Levine struggled in his first season succeeding Kevin Sumlin, but he has quickly built a sturdy, athletic program. The Cougars should have been blown out a few more times than they were a year ago and might struggle as the bounces regress to the mean, but they are stocked well for an extended run in the upper half of the AAC, and that should remain the case no matter how many interceptions O'Korn throws this fall.