One of college football's biggest can't-miss prospects might end up going undrafted due to making the same kind of mistake over and over.

Share All sharing options for: Timeline: The rise and fall of Seantrel Henderson, former blue-chip recruit

During his prep career at Cretin-Derham Hall in Minneapolis, Seantrel Henderson ranked among the top college football prospects in the country. And even after a largely pedestrian career at Miami and a number of marijuana suspensions, the 6'7, 331-pounder was still projected to be drafted in the middle rounds of this year's NFL Draft, "as long as he doesn't fail the Combine's drug test."

So in an effort to re-trace the strange college career of Seantrel Henderson, let's take a look back.

Henderson was the No. 2 overall recruit in the 2010 class, according to the 247 Sports Composite. He'd earned national recognition as Rivals.com's Junior of the Year in 2008 and USA Today's Offensive Player of the Year in 2009. However, teams weren't just trying to secure a commitment from the star offensive tackle — they were also recruiting his dad.

"Me and my dad have a great relationship," Henderson told the Palm Beach Post. "We're cool. We're a team. That's how I look at it."

Henderson's dad, Sean, was also a rapper known in the Minneapolis area. When recruiting Henderson, teams made sure to use their rap game to their advantage. Former Ohio State assistant Doc Tressel apparently went all-in on the rap aspect of the recruitment, according to the New York Times.

Miami Hurricanes blog State of The U

On Monday, the Ohio State running backs coach Doc Tressel sent an e-mail message to Henderson's father referring to a performance by the rappers Lil Wayne, Eminem and Drake during the Grammy Awards on Sunday. When Tressel, the older brother of Ohio State Coach Jim Tressel, visited the Hendersons in December, Seantrel made his father freestyle rap for him.

"That was a Grammy performance made me think of u! After u did that rhyme 4 me in Dec u said u felt best bout the Buckeyes. The Bucks hbe not changed!! We want u to be down here ovr spr break to learn more bout Columbus. Doc"

Eventually, Henderson verbally committed to USC on national television, though there was speculation that Sean forced Seantrel to commit there to help launch his music career, as Every Day Should Be Saturday so elegantly documented.

Seantrel Henderson's father ended the long, tired drama of his extended courtship with USC by finally having his son sign the damn thing today, thus formally locking him into USC. Wait, dammit. That should read Seantrel. Yes. That should be Seantrel, not his father, who has no undue influence over the process and most certainly does not want his son to go to Los Angeles because, at an advanced age, he wants to get into the rap business.

However, Henderson didn't sign his letter of intent right away. He waited over a month, out of fear that USC would be sanctioned, but eventually signed with the Trojans.

The drama wasn't over yet, though. In July, after the sanctions were worse than he thought, Henderson asked for and was granted a release from his letter of intent by USC. He then chose Miami.

Henderson lived up to the recruiting hype during his freshman season. He played in 12 games, starting nine times, and was named to a number of freshman All-American teams. That's especially impressive for an offensive lineman, many of whom need a redshirt year to adjust to the size difference of their opponents from high school to college.

In March, Henderson was suspended for the first game of the season, though Miami did not cite a reason (later, Henderson admitted it was because of marijuana use). He had offseason back surgery and only played in eight games (starting two) that year, marking a dip in his development from his freshman season.

Henderson and two other players were suspended for the beginning of spring practice for, as coach Al Golden put it, "weeding."

"And so we're sitting here saying to the guys, 'That is an incredible offseason,' and 'Great job,' and then the next day you've got to weed the garden again. It's like, after a while, you stop using the weed whacker and you get a shovel and get the whole root. That's kind of where we're at."

In August, Henderson was involved in a car crash while dealing with a tragedy. He sustained a concussion. He was cited for driving with an expired license, disobeying a traffic sign driving without a license unknowingly, culminating in a $484 fine.

That year, he started seven games. 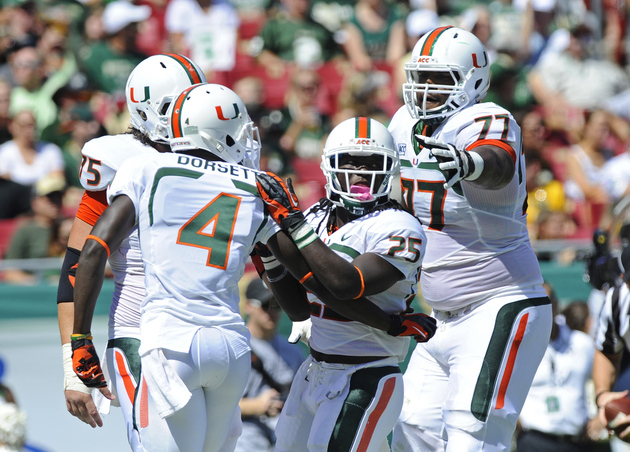 Henderson was suspended for one game (again, he admitted later, for marijuana use) and was a backup in three others, but started the majority of the year and was named an honorable mention on the All-ACC team. 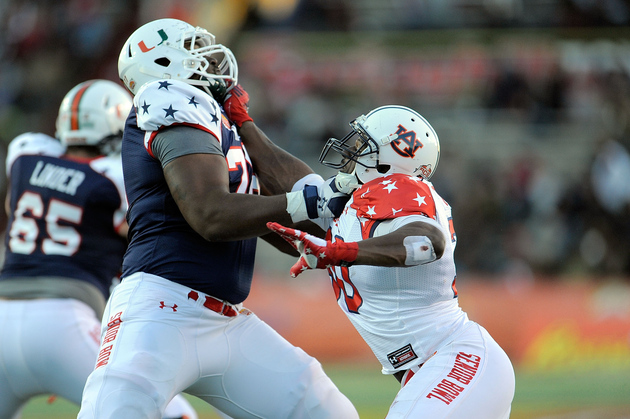 At the Senior Bowl, Henderson admitted that his positive tests were for marijuana use, hoping to get out in front of the situation.

"I'm showing my character. Showing them that I'm responsible, reliable, dependable," Henderson said. "I want to keep letting them know all the negative things are behind me."

The Sun Sentinel quoted an anonymous NFL executive regarding the marijuana use and Henderson's NFL draft stock:

"As long as he doesn't fail the combine's drug test, we can get past that," the executive said before pointing out UM cornerback Sam Shields had similar issues before turning in an impressive career with the Packers. "Plenty of teams take chances on players with his talent."

The executive said teams need to understand if Henderson was a recreational drug user or "if he has a problem."

However, the perceived character issues continued when ESPN's Chris Mortensen tweeted that Henderson quit his pro day before finishing.

Miami OT Seantrel Henderson didn't help himself today - "quit" his Pro Day workout halfway through it. No explanation yet. Disappointing.

And on Monday, with Adam Schefter's report that Henderson had failed the drug test at the NFL Combine — essentially an "intelligence test," since you know you're going to be tested — Henderson's future is in trouble again.