Why Aaron Murray might be the 2014 Draft's Russell Wilson

Johnny Manziel has the talent, Zach Mettenberger has the physique, and AJ McCarron has the rings. But if you're looking for an SEC quarterback the NFL might be underrating, we think we've found the guy.

This past season was a mixed bag for SEC fans. On the one hand, the conference lost its national championship streak. In fact, the league was (gasp) second to the Pac-12, according to at least one measure.

On the other hand, the league produced consistently thrilling games, with a series of high-scoring gems culminating in Auburn's 109-yard missed field goal return against Alabama. Unless you hate fun, it was a great year to be watching SEC football.

Part of the reason was the crop of experienced, talented quarterbacks. At the forefront were Manziel, McCarron, Mettenberger, and Murray. The quartet occupied the top four spots in the SEC rankings for passing yards per attempt and four of the top five spots (joined by South Carolina's Connor Shaw) for adjusted yards per attempt and pass efficiency rating. Now, all four are headed to the NFL.

Quarterback joins Chiefs in 5th round

The consensus of Draft analysts is that Johnny Manziel is the best NFL prospect in the group, with McCarron, Mettenberger, and Murray in some order in the tier behind. SB Nation has the order Mettenberger-Murray-McCarron. Manziel is expected to be off the board in the first 10 picks; the remaining three should be gone between the late first round and the middle rounds.

Now, a simple point: with the possible exception of Manziel, Aaron Murray is the best SEC quarterback Draft prospect in 2014.

I'm not making this case based on any scouting acumen, of which I have none, other than the ability to chuckle at Taylor Martinez's throwing motion. Instead, I'll cite the predictive model developed by Football Outsiders for assessing quarterback Draft prospects. Using regression analysis to determine which factors correlated with future NFL success, David Lewin created the Lewin Career Forecast. It found two factors -- games started and completion percentage -- to be the most important when guessing whether college quarterbacks would succeed.

Here's our rapid reaction to the 2014 NFL Draft.

For instance, LCF spotted Mark Sanchez's bust potential, based on the fact that he started only one season at USC. If he were an elite quarterback, then why was he sitting behind John David Booty for two years? And how risky is it to spend a high pick on a guy who made only 487 college passes? LCF predicted the rise of Russell Wilson, who'd started for four years. Wilson threw 1,489 times in college, which gave scouts a much better sample size and gave Wilson more opportunities to learn.

So what does LCF say about the current crop of SEC quarterbacks? Well, it has Aaron Murray far and away as the best prospect. This stands to reason when we compare him to the others.

Murray started for four years, which is one more than McCarron and two more than Manziel and Mettenberger. In fact, Murray beat Mettenberger out when the two were direct competitors at Georgia in 2010. Murray never spent a season languishing behind the unremarkable pair of Jarrett Lee and Jordan Jefferson. 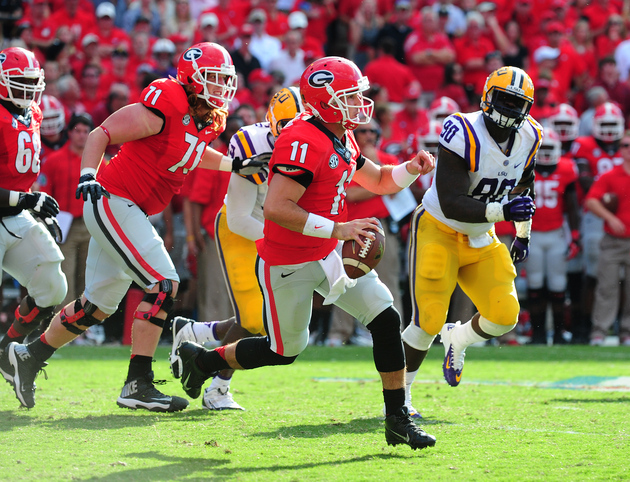 McCarron comes closer to Murray, as he started for three years and had a higher career completion percentage. However, he doesn't have Murray's mobility. (Career rushing yards: Murray 396, McCarron -50.)

And that gets to my theory as to why NFL teams should stay away until later: quarterbacks from dynasty programs are a bad bet. In a way, this is a compliment to the juggernaut that is Alabama football. How could we expect McCarron to mature when he spent three years passing from perfect pockets to elite receivers, all aided by outstanding running backs? That environment isn't anything like what he'll face in the NFL.

Grades for every 1st-round pick

It's too early for final draft grades, but here are our initial reactions to the first round of the 2014 NFL Draft.

Grades for every 1st-round pick

Isn't it easier to have a high completion percentage when surrounded by superior talent?

Do we have reason to expect Alabama to be any different?

Murray over Manziel? Probably not, but ...

And that brings us to Johnny Football. It takes some real squinting to see Murray as a better prospect than Manziel. Going by only the same standards as above, the Heisman winner had a significantly higher completion percentage and slightly higher yards per attempt and adjusted yards per attempt. Plus, NFL scouts are clearly much higher on Manziel, based on the disparity in Draft projections.

Murray uses his mobility in a way that NFL coaches can understand.

So what factors would make us think that the gap between Murray and Manziel is not as big as many think?

So why is it that Football Outsiders doesn't trust its own numbers in this case? Here is the explanation from Aaron Schatz:

Murray is only No. 1 in the LCF because he is the only one of this year's top prospects who started for all four years of college. His passer rating declined in his senior year, which is not a good sign, and he completed only 62.3 percent of passes during his career. And all of this is likely moot anyway because he's probably not going to end up being chosen in the first three rounds.

Murray is at least on the cusp of being taken in the first three rounds, so the last point is iffy. Is there something that makes the LCF projection valid if Murray goes in the third round, but invalid if he goes in the fourth? Murray isn't a Danny Wuerrfel type with great college stats and limited physical tools, which is what the "first three rounds" requirement is supposed to filter from the projection.

The issues with Murray's passer rating dropping as a senior illustrates the maxim described by Schatz at the outset of the piece: scouting and context are important. In a normal senior year, Murray's numbers would have likely gone up, including his completion percentage. In Murray's actual senior year, he was deprived of the chance of playing with just about every front-line running back and receiver on the roster and was left fending for his life as the last survivor in the platoon.

Murray started for four years, he played without massive advantages, and he wasn't in a system that has a terrible track record at producing successful pro quarterbacks. If the NFL is a copycat league, then maybe its teams should look at the quarterback who just won the Super Bowl and pick the prospect with similar physical dimensions and college experience. Aaron Murray isn't necessarily Russell Wilson, but there are a number of similarities, and the right team should notice those parallels.

Which of this year's SEC quarterbacks is the best bet to have a successful NFL career?