Shelby Osborne will be attending Campbellsville University in Kentucky next year to play football. She answered SB Nation's questions about how she got into football, her recruiting process and what she expects in her first season of college football.

Last week, Shelby Osborne of Jeffersonville High School in Indiana made history when she committed to play football for Campbellsville University, becoming the first female defensive back in college football history.

Osborne, listed at 5'6, 140 pounds, has played just one year of football, but served as JV captain and appeared in JV games playing cornerback, safety, wide receiver and gunner on the punt return team. She also appeared at cornerback in five varsity games. And football isn't all she does. She was active in her school's drama department and even wrote a play called "Backwoods Football."

She's on course to become only the second woman to play a non-specialist position in college football -- several others have played placekicker.

As an NAIA school, Campbellsville doesn't have roster limits and doesn't hand out athletic scholarships like FBS programs (they can split 24 scholarships among their team). Anyone who wants to play gets an opportunity to prove themselves. Osborne was contacted with an invitation to go to the Tigers' spring game for a visit, which ended with the opportunity for her to play college football. 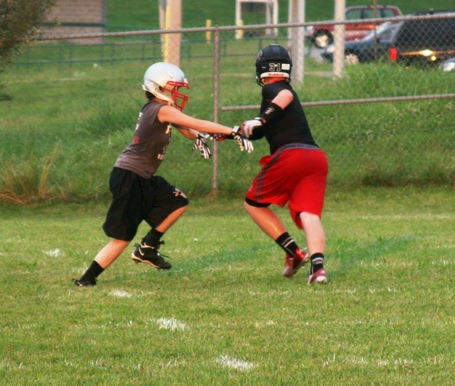 Shelby Osborne [left] in a defensive back drill.

What inspired you to play football in the first place, and when did you start?

Shelby Osborne: Well, it was the sectional championship game of my junior year, and we weren't playing so hot or even to the best of our ability. I said to myself, "I could play better than that," and that's what planted the seed in my mind that this might actually be possible! I went to my coach the next Monday and asked if I could be on the team and began working out from there.

Did you play other sports before this?

SO: Growing up I floated from sport to sport. Cheerleading, wrestling, track, cross-country, baseball, softball, and soccer. You name, and I've played it. I was always into athletics, working out, and being fit, but I never found that one sport that captured my heart until football.

What was the recruiting process like? Did you reach out to Campbellsville, did they reach out to you, or did you send tape to a number of schools?

SO: I filled out hundreds and hundreds of recruiting questionnaires looking for someone to give me a shot. I received an email inviting me to the (Campbellsville) Maroon-White spring game in April. I went and coach was one of the coolest about me being a girl. After I left from a visit, half the team and recruits hit me up on Twitter or Instagram, messaging me and expressing how cool it is of me to be trying, and other words of encouragement.

What was the reaction from your classmates and teammates when you first started playing, and has there any negative (or positive) feedback on social media since you committed?

SO: When I first started playing, the reaction was extremely negative. I was the only person in the world that believed in myself, but day-by-day I slowly began to change people's minds. I had to earn each and everyone's respect.

There have been a lot of people saying how their kids look up to me, or they are now fans. It keeps me encouraged that I'm following my dream. There has been some negative, but they say if people aren't laughing at your dreams, then they aren't big enough. I just have to keep faith and keep looking forward and keep focus and take negativity with a grain of salt.

Do you find that opposing teams play against you differently because you're a girl? Do they deliberately run plays toward or away from you?

SO: Well most of them didn't know I was a girl, because I would hide my hair and do anything possible to not show I was a girl. I never wanted anyone to take it easy on me.

They only realized I wasn't a guy when I unsnapped my helmet and my hair began to fall out of it. Shaking the hands of my competitors was my favorite part of the game because I showed I could play with them and they couldn't discount what I did because they never knew I was a girl. That is, until the stands started ruining it by chanting, "Shelby, she's a girl" at my opponents.

What are your goals, football-wise, with Campbellsville? Have your coaches given you any insight about how they plan to use you? Also, what do you need to improve to be productive at the college level?

I know I am expected to come in and do the same thing my teammates do, and that is what I want. I'm going to play to the best of my ability and do the best I can at all times. I believe if you really want to achieve your dream you must want it as bad as your next breath. I model my life after the "how bad do you want it" speech by Eric Thomas.

"They only realized I wasn't a guy when I unsnapped my helmet."

I gave everything, from waking up before everyone in my house was awake to run before school, joining track, weightlifting, and sports performance classes during school, to staying after with the coaches every day after practice just to improve my skill a little bit more. I don't return home from training until eight or nine o'clock on most nights. My sacrifice and determination are what separate me from anyone else, because somewhere out there are opponents training harder than you to beat you.

What are you expecting your college football experience to be like?

I can't wait to be on campus and to be with the team. I miss the sound of cracking helmets and pads hitting. I just want to be a part of the team. I could care less if I ever step on the field. I could care less if I ever play a down, as long as I'm a part of the team and get to practice and continue with my love and passion for football. If me playing in a game means sacrificing the quality of the team, then I don't want that.