Penn State's rising sophomore has been compared to some big names in his short time. While he's nowhere near their level yet, a closer look at his best 2013 work shows how high he can go.

Penn State quarterback Christian Hackenberg arrived in Happy Valley with an immense amount of hype surrounding him. His vast skill set and pro-grade size, coupled with a head coach who'd built up a track record working with Bill Belichick and Tom Brady, had many comparing him to fellow former Elite 11 five-star recruit Andrew Luck.

If Hackenberg is able to continue to build off his promising freshman season, which included 2,955 yards and 20 touchdowns, we may very well be looking at a star in the making. But one thing is for sure; Hackenberg's hype did not exceed his production.

Let's look at the best facets of his game, based on the glimpses we've gotten at his full potential.

Both Harbaugh and O'Brien are sticklers for the nuances of the position despite their different philosophical backgrounds. While Luck had the slight benefit of leaning on a West Coast-based, rhythm-and-timing offense predicated on a heavy run game, Hackenberg was thrown to the wolves in a vertical-stretch offense equipped with five- and seven-step drops, multi-read progressions, and plenty of ball-handling duties.

In fact, O'Brien installed a light version of one of the most successful schemes in recent memory; the 2011 New England Patriots offense. O'Brien's vertical scheme helped Brady throw for the second-most yards in NFL history at the time, with 5,235.

To see an 18-year-old freshman operate in the same offense as Brady was an eye-opening experience. Though the results were mixed at times, the rookie showed he grasped the complex attack.

Here is a Brady-esque throw. Hackenberg does an excellent job of deciphering coverage by first reading the single-high safety. As the route combinations develop, it becomes apparent that the post-corner route would find a void in the area defense.

Reading your keys is one thing and executing a perfect throw is another. He delivers the ball with enough velocity while leading his receiver away from the defender. The corner (or safety) had no chance to compete against the route.

Hackenberg arrived at State with very few flaws in his mechanics, but you could tell that O'Brien had him watch endless hours of tape on Brady. Everything from his stance in the pocket to his over-the-top delivery is reminiscent of the three-time Super Bowl winner.

Virtually every play starts off looking the same with Hackenberg. He does a wonderful job making handoffs and play-action fakes look exactly the same. A lot of quarterbacks will change up their arm slot or ball placement, thereby differentiating the two sequences. 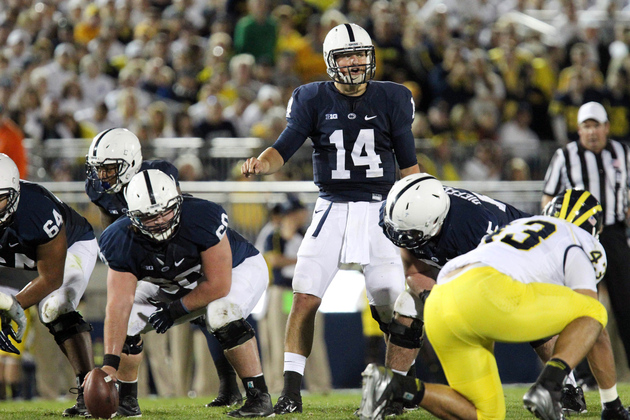 "He had basically a one-man receiving corps and a running game with no explosiveness, so he was asked to create a lot on his own, and there were predictable growing pains. Then came the finale. Hackenberg completed 21 of 30 passes for 339 yards, four touchdowns, and no interceptions against a Wisconsin defense that ranked ninth in the country in Def. F/+. That's how you get attention."

In this play-action roll out -- a play O'Brien entrenched deeply into his Penn State playbook -- Hackenberg sold the deception to perfection. Additionally, Hackenberg rolled out far enough that he allowed himself time to go through his progressions. Once he spotted his target and saw the void in the area defense, he delivered a strike while still on the run. He did all that while leading his target up the field, allowing for additional yards after the reception.

Conventional wisdom says it's wise to reset, then deliver the ball with your lead foot pointed towards the target. But Hackenberg has an ability to throw strikes while in motion.

At 6'4, 220 pounds, Hackenberg has prototypical size. He's stout enough to stand in the pocket and withstand punishment, and he's athletic enough to fit in a move-the-pocket offense with boots, sprintouts, and waggles.

But most importantly, he has an innate feel for the pocket. Combined with his athleticism, that allows him to improvise similarly to Luck (although he'll never have Luck's wheels).

Often when pundits refer to mobility, they allude to QBs like Robert Griffin III, Cam Newton, and Colin Kaepernick; players who can easily break off long runs.

But defensive players will tell you that the elusive pocket ability of quarterbacks like Peyton Manning and Brady can yield similar results. Obviously, those veterans will never threaten any rushing titles, but their maneuverability in the pocket allows for explosive plays to be had by their receivers.

Here we see Hackenberg doing his very best Brady imitation as he senses the pressure by way of his peripheral vision and delivers a strike while taking a punishing blow to the midsection. Playing zone defense against a quarterback who can buy time in the pocket with his feet is courting danger.

He will eventually find the void in the zone ...

Hackenberg was very astute in his reads here, as he may very well have thrown a pick-six had he let the ball go to his secondary target. He has strong enough hands to pull the ball in after going into his throwing motion. He also has a very nice slide, which is something you can't say for a lot of young QBs. He knows to get as many yards as he can and avoid taking a shot. He's simply a polished player, especially for a rising sophomore.

Multiple characteristics came into play in the above sequence: mobility, understanding of coverage, and arm strength.

It's probably getting a bit redundant, but when you're a big fan of Brady's, seeing Hackenberg make similar throws in the same offense puts a ton of things into perspective.

Hackenberg has the ability to make a variety of high-difficulty throws: comebacks, square-ins, skinny posts, and opposite-hash tosses. While his 58.9 percent completion rating may not suggest it, the low percentage is mostly due to the challenge of  O'Brien's vertical offense. Hackenberg is extremely accurate in the pocket and on the run.

Expect a jump in completion percentage with him operating out of the more user-friendly stylings of new head coach James Franklin. His prowess in the short-to-intermediate game will be very apparent under Franklin, who has more West Coast principles in his philosophy.

Franklin's offense contains multitudes, though, so expect him to still use Hackenberg's strong arm to stretch the field vertically.

With State's top receiver from last season Allen Robinson (97 catches for 1,432 yards and six touchdowns) now suiting up for the Jacksonville Jaguars, Hackenberg will have to build a rapport with another outside receiver. Sophomore Geno Lewis has the wheels to step into Robinson's shoes, as seen in the above sequence, but it may be in Franklin's best interest to make use of his plethora of talented tight ends.

By fielding big targets like Breneman and James and relying on Hackenberg's arm strength, Penn State can create bigger windows and hit them well outside of the pocket. The size of these players might also give the Lions some leeway in installing passing concepts that attack the middle of the field, if Hackenberg can master the reads and timing.

If Franklin can teach the timing and the routes of his passing game effectively, the talent exists to attack and punish defenses for loading up to take away the angles and leverage in the pull-heavy run game.

At this point in his career, Hackenberg is arguably further along in his development as a thrower than Luck was, despite the more mobile Luck having a slightly higher passer rating as a freshman. His freshman numbers also compare favorably with Brady's first year as a starter, which came in the Michigan Wolverine's junior season.

If he can make sure he always drives off his back leg in the pocket, his accuracy will continue to improve in the short-to-intermediate game. Hackenberg barely scratched the surface of what he can ultimately be.