Syracuse could be fun in 2014, with a high-paced, run-first offense and a TFLs-or-bust defense. But a more experienced roster will need to overcome the inconsistency that held the Orange back last fall.

It wasn't hard to see a dropoff coming for Syracuse in 2013.

In taking the Buffalo Bills job, Marrone left the Syracuse program earlier than expected. But the timing of his departure could be worse for both parties. For Marrone, his team was due a step backwards in 2013, replacing the quarterback, two best receivers, and two best linemen from a resurgent offense, not to mention a good chunk of the defensive line. Marrone was selling high before his stock ticked down a bit, at least temporarily.

One could argue that the departure came at a decent time for Syracuse, too, at least if Marrone had to leave at all. Recruiting was not really picking up, and as mentioned, the Orange were most likely due a rankings drop this fall. Marrone built an interesting team with an outstanding offensive line and an aggressive defense, and he certainly could have continued to slowly build upstate, but this wasn't the worst time in the world for a change to happen ... if his replacement, Scott Shafer, is up to the task, anyway. (Kind of an important detail there.)

For the first time since we began recording F/+ rankings (2005), Syracuse was a top-40 team in 2012. But the Orange pulled off that feat with a rather experienced (read: old) squad. There was too much youth for the 'Cuse to expect further improvement in the short term, but with only three top-40 teams on the 2013 schedule, the Orange were able to pull off a bit of a late-season rally and hit 7-6 while beating only one top-60 team. They reached their third bowl in four years after getting to only one in the previous seven.

All of this was good for program momentum even if Syracuse was in no way very good. The defense was decent, but the offense regressed dramatically, and ... again, the 'Cuse only beat one top-60 team.

There are five top-40 squads on the schedule this time around, and only two come to the Carrier Dome. Syracuse is going to have to improve to reach its fourth bowl in five years. Scott Shafer and the Orange have to prove that 2013 was the blip, not 2012.

But considering last year's youth, the Orange should improve. They return their starting quarterback, experience and explosiveness at running back, seven of last year's top eight passing targets (for better or worse), four starters on the offensive line, four of the top five defensive linemen, five of the top six linebackers, and four of the top five defensive backs. The team that won four of its final six returns most of the reasons why it won those games.

In their wins, the Orange had an above-average offense and a great defense. They averaged 5.7 yards per play against a stout Tulane defense and 7.2 against NC State. They rushed for 362 yards against NC State, 242 against Maryland, and 208 against Minnesota, and they threw for 270 against Boston College and 359 against Wagner.

Defensively, the highs were even higher. They allowed fewer than 5.0 yards per play in five of seven wins, including 3.8 against Maryland, 3.7 against NC State, 3.0 against Wake Forest, and 1.7 against poor Wagner.

And then there were the losses. Northwestern averaged 7.2 yards per play, Clemson 8.1, and Florida State (gulp) 11.6. Georgia Tech held the Orange to 3.8 yards per play, Penn State 3.5, and FSU 3.2. In 33 fewer plays, FSU outgained Syracuse by 276 yards. You didn't control Syracuse; either you dominated the Orange, or the Orange dominated you.

In a lot of ways, these are the characteristics of a young, reasonably high-upside team. But Syracuse took those characteristics to the extremes, and when the team was bad, it was so bad that "upside" didn't really come into the conversation. 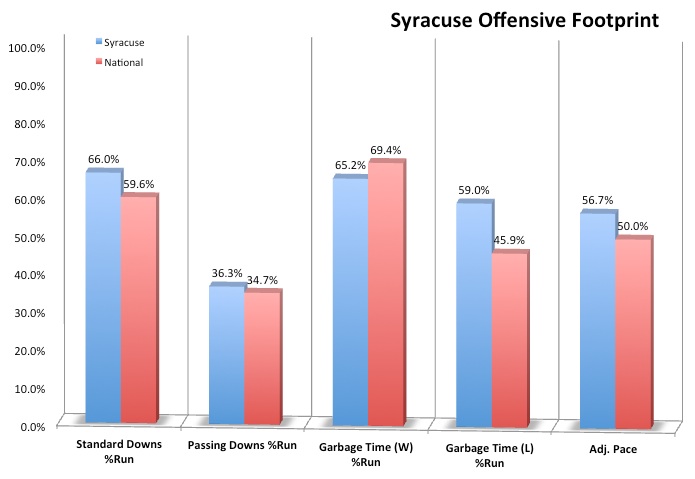 3. Picking up the pace

Taking the amount of rushing into account, Syracuse played at a faster pace than the national average in 2013. If George McDonald gets his way this fall, the Orange could move even faster. And in theory, this could work out pretty well. Syracuse was reasonably efficient in Terrel Hunt's first year behind center; the big senior wasn't incredibly explosive, but in his 93 non-sack carries, nearly 60 percent of them gained at least five yards.

Hunt brought efficiency to the table while running backs Jerome Smith, Prince-Tyson Gulley, and Devante McFarlane brought explosiveness. (George Morris II brought neither, but he's got time to improve.) A parry-and-thrust running game can work pretty well, and if you're moving the chains frequently enough, you can have your opponents gassed by the second and fourth quarters.

After rushing for 2,085 yards in two years, Smith left early for the pros and was picked up by the Falcons as an undrafted free agent. He was good in the open field but wasn't great at finding open field, and that resulted in a hit-or-miss junior season. He rushed for a combined 265 yards (7.2 per carry) against Clemson and NC State and a combined 106 yards (3.2 per carry) against Georgia Tech, Wake Forest, and Florida State. He was both reliable and replaceable.

Prince-Tyson Gulley received an extra year of eligibility thanks to injuries suffered in 2011; he's not necessarily the most durable back in the world, but he's even better in the open field than Smith, and he'll be complemented by big Adonis Ameen-Moore and Devante McFarlane, who thrived in a reserve role. He carried 16 times for 176 yards against Clemson and FSU.

This group will be running behind four-fifths of a line that ranked 27th in Adj. Line yards (fourth in Power Success Rate) last fall. All-conference center Macky MacPherson is gone, but the other four starters have combined for 78 career starts. This is a line that far exceeded its recruiting rankings last year and should do so again, especially with Hunt helping out from an efficiency standpoint.

The problem in 2013 was that once Syracuse fell behind schedule, the drive was ending rather quickly. And without some early help from an exciting batch of youngsters, the passing game could trip the Orange up again this fall. And as we've said many times throughout this preview series, pace backfires if you're going three-and-out in record time.

Syracuse ranked 42nd in Standard Downs S&P+ but 102nd in Passing Downs S&P+. Hunt completed a decent 61 percent of his passes with a decent five percent sack rate, but his receiving corps, rebuilt after featuring Marcus Sales and Alec Lemon in 2012, couldn't get open downfield. His top four targets combined to average only 10.4 yards per catch, and while seven of the top eight targets return, none of them averaged even 8.0 yards per target.

There's hope in the incoming freshman class. Knowing an upgrade was needed, Shafer signed five receivers in his 2014 class, including four-star wideout K.J. Williams and high-three-star Steve Ishmael. Throw in sophomore slot receiver Brisly Estime, and you've got some interesting potential here. But potential might not become production until 2015 or later. 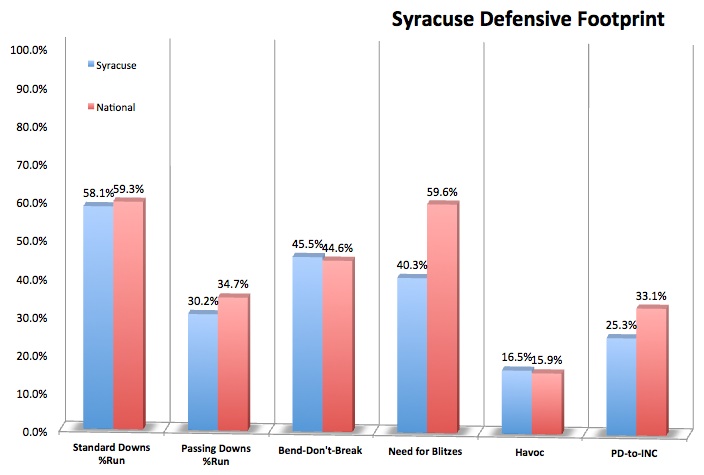 In 2012, when Shafer was wearing the defensive coordinator hat, Syracuse attacked and attacked and attacked. The Orange had six players in the front seven with at least 8.5 tackles for loss; only two of the six returned in 2013, however, so there was reason to fear a dropoff.

The drop was minimal; Syracuse fell only from fourth in the country in tackles for loss in 2012 to 17th in 2013. The Orange spread the love, with nine players recording at least 4.5 TFLs, and seven of those nine return this fall.

The mindset of the Orange defense is clear, and typically an aggressive defense like this ends up ranking pretty high in the efficiency rankings while suffering breakdowns and ranking lower in the explosiveness rankings. Syracuse, though, was almost perfectly mediocre across the board, just as it was in 2012. The Orange ranked between 50th and 70th in a vast majority of the rankings above. It's difficult to be bland and exciting at the same time, but in a way Syracuse pulled it off.

7. The line did its job (against the run)

Syracuse racked up a lovely TFLs total despite a rather sketchy pass rush. A lot of this had to do with the Orange's ability to attack the run. Syracuse ranked 21st in Stuff Rate and 36th in Power Success Rate, stunting like crazy and attacking gaps with machetes. The best pass rusher was a tackle (Jay Bromley), but the line did quite well against the run.

Can the Orange maintain this play in 2014? The loss of Bromley and Zian Jones could hurt, and it appears that John Raymon might not be ready to play this fall after suffering a brutal knee injury against Georgia Tech last year. That leaves tenuous depth in the middle, and it means there's a lot of pressure on incoming JUCO tackle Wayne Williams to thrive quickly.

If tackle isn't a weakness, the end position could make this a great line. Again, the pass rushing here isn't great, but Robert Welsh has his moments, and the ends as a whole were big enough to shoot gaps and make a lot of plays on standard downs.

If there's a concern in the back seven, it probably comes at cornerback. Syracuse didn't allow a ton of big plays in 2013, but the ones the Orange allowed were a) probably through the air, and b) enormous. Syracuse allowed only 37 passes of 20+ yards (36th in the country), 13 of them went for 40+ (107th). And that was with starters Keon Lyn and Ri'Shard Anderson in the rotation.

Lyn got hurt five games into the season, and both are now gone, leaving senior Brandon Reddish and juniors Wayne Morgan and Julian Whigham to man the islands on the outside. Reddish is experienced, and Whigham is actually quite intriguing (he made only 10.0 tackles while defensing six passes, which means either he batted away everything that came near him or just missed a ton of tackles). But they were hit-or-miss last fall, and if any of these three get hurt, defensive coordinator Chuck Bullough will have to dip into a pool of walk-ons and freshmen.

Brisly Estime's four punt returns went a really long way, while basically every other return, kick or punt, did not. Punter Riley Dixon had a strong leg, and kick and punt coverage were decent, but place-kicking was shaky (three missed PATs, 2-for-6 on long field goals). Special teams were neither a strength nor weakness last fall, though with everybody back, including Estime, there's certainly potential for improvement. 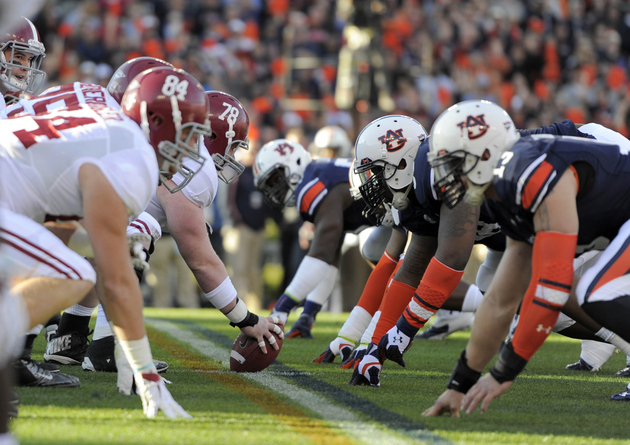 Syracuse has enough experience and potential that, while a return to the top 40 is probably too much to ask for, improvement isn't. And if the Orange can move up into the 50-60 range, another bowl is probably in the cards. That would put them in position to beat the four home opponents projected below 50th, along with CMU and Wake Forest.

The margin for error with this schedule isn't huge, however, and October will pose quite the challenge. Syracuse hosts Louisville and FSU in back-to-back weeks and, after a trip to Wake Forest, visits Clemson. Survive a likely 1-3 stretch in the middle, and there are wins to be found in November.

We'll begin to learn a lot more about Syracuse's ceiling under Shafer this year. There is potential for entertainment here, especially if McDonald gets an efficient offense moving at a breakneck pace and the defense racks up the big plays while suffering fewer breakdowns. But if it's the same story as last year, with great performances getting overshadowed by horrendous ones (and the great-to-horrendous ratio still breaking slightly toward horrendous), then there might be reasons to wonder what kind of consistency a Shafer program will have to offer.