A few years ago, college football's most powerful figure had to choose between the familiar Heartland and the bright lights of the coast. The rest of the sport frantically waited.

Share All sharing options for: That time college football had a decision just as crazy as LeBron James'

College football fans have been proud of the levels of lunacy being displayed by NBA fans, analysts, and reporters during this free agency period. Gambling! Flight-tracking! Rumor percentage levels! Citizens flocking to police! Reporters yelling at each other! Twitter recruiting! Asking puzzled men in utility vehicles about the inner workings of enormous corporations!

So, as a further show of kinship toward the burgeoning den of madness that is NBA coverage, here's the correlation between LeBrondemonium and that time one entity almost changed all of college football by itself.

The unquestioned No. 1 brand in the country. Unparalleled talent resources and the absolute crown jewel of all potential lineup additions. Recently fell behind a team from a dustier region of Texas, but remains the sport's single best long-term bet on the field and off. 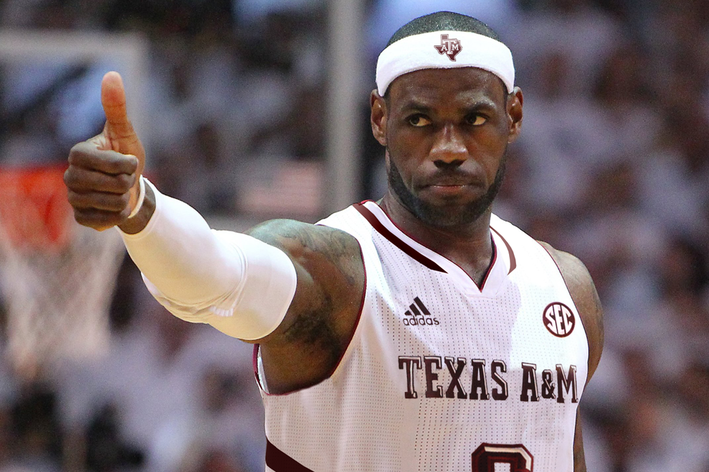 During the 2010-2011 conference realignment frenzy, the Pac-12 very nearly added Texas. Multiple times. And Oklahoma. And two of their other state rivals. And while Oklahoma, like Chris Bosh and vintage Dwyane Wade, is a game-changing star, the move was still first and foremost about building a monster around Texas.

This makes Cleveland the Big 12. Johnny Manziel plays in the Big 12 now!

Will LeBron forever sever certain ties to where he's from and continue along the SUPERTEAM path, or will he stick it out where he grew up?

Both Dans are prone to spoofing. And both Dans seem to have realized the virtues of capitulation along the way -- but still ended up helping to put the whole thing at risk.

He's got an offer to leave. It's a great one, like Mizzou's SEC invite was, whether LeBron stays or not. But If LeBron does leave, he's got no choice but to abandon ship.

(Muddying this part of the analogy: we said up above that Miami is the Pac-12, but in this part, Miami's the Big 12. These things complicate each other naturally, and we wouldn't have it any other way.)

Great basketball history! An awesome overall package in the mid-2000s! Some rough athletics as of late.

And if Texas and company had gone to the Pac-12, with other teams also fleeing to the SEC and Big Ten, Kansas would've found itself scrambling to help cobble together a serviceable Big 12 or also jetting elsewhere, maybe to the Big East or even ACC.

But all Kansas could do was wait. And party in Las Vegas with Texas. No one heard about that part, I think.

Also, there was a Kansas flight-tracking story in there.

Certainly a lot of reporting was done along the way. Without question, all sorts of pieces of information were emanated. Many people received those bits of text and processed them. A lot of things were said, and you can't deny that.

This is getting very interesting. Definitely not at 85 pct for Cavs anymore :)