Your FAQ on what, how, who, and where (and kind of why) to follow SEC Media Days.

SEC Media Days is a four-day extravaganza in which more than 1,000 media members swarm on Hoover, Ala., to talk with SEC coaches, players and other associated SEC personnel. This is the first time the event will span four days.

Each major conference has an event like it, but the SEC's managed to create an actual event out of its. It's usually a high-octane event (as far as media events go), with weird questions, weird answers and a whole lot of optimism. There will be prepared statements, interviews and autographs for the fans that choose to show up. Here's our coverage from last year's event, to give you a better idea of what's in store.

Monday, July 14 through Thursday, July 17. It runs from around 10 a.m. to 5 p.m. ET on most days, but starts a little later Monday and ends early Thursday.

How do I watch?

ESPN and ESPNU will have coverage throughout the festivities.

What about streaming online?

ESPN3 and SECSports have you covered.

What if I'd rather read?

Just keep this Twitter list open — it includes our four in Hoover (SBNation.com's Steven Godfrey, Team Speed Kills' Brandon Larrabee, and Chuck Cummings and Derek LaFitte of Good Bull Hunting), lots of other media members on the scene, all of our SEC team sites, and some folks sure to be making jokes from afar.

What's the schedule and who is speaking? 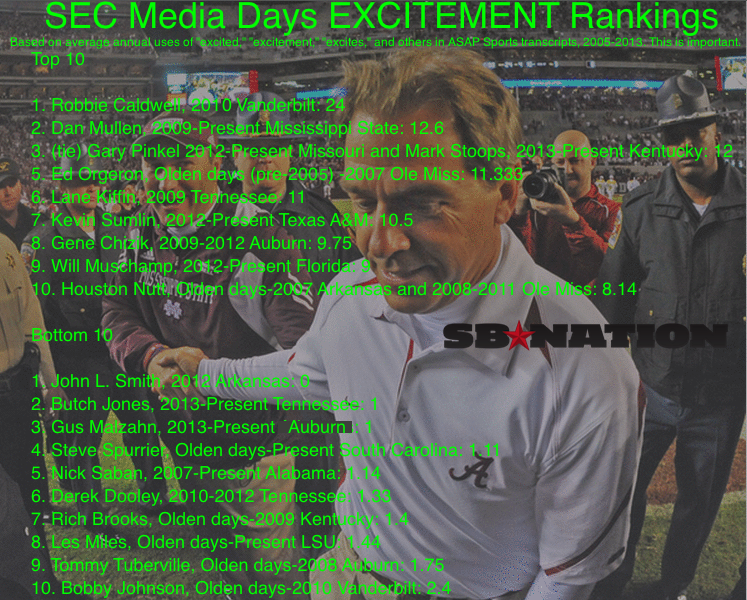 Who's the one coach everyone must listen to?

Some samples from the 2013 season (read more here):

Also of note: Dan Mullen is statistically the most excited SEC football coach.

Will any actual news happen?

We'll learn more about the standing of Auburn starting quarterback Nick Marshall. He was cited for marijuana possession Friday, and Gus Malzahn has a reputation of having a "zero tolerance" policy. Marshall's status will likely be the biggest news of the week.

Also, Will Muschamp is known for dishing out injury status updates on seemingly his entire roster.

Is there a Darren Rovell fact I can tell my friends?

You bet there is.