The hardest-hitting and maybe best game of college football's opening weekend has all sorts of implications for 2014 ... and beyond. (August 30, 9 p.m. ET, ESPN.)

Share All sharing options for: LSU and Wisconsin running toward the future in Week 1 Texas showdown

One of the more intriguing contests in week 1 of the college football season is between LSU and Wisconsin at NRG Stadium in Houston, Texas. Understanding the significance of this game and the match-ups at play requires a look at some of the long-term narratives at work.

With Zach Mettenberger, Odell Beckham, and Jarvis Landry departing from the Tigers, along with four-sixths of a very good Wisconsin defensive line corps and chief Badger Chris Borland, neither of these teams is especially well-positioned to take one of the four Playoff berths in 2014. However, both of these programs are headed in the direction of being contenders for the long run.

Their meeting will show how far along each team is and what steps remain to be taken. Even the location, Houston, is not without its significance.

The stakes in Houston

Gary Andersen is out to turn Wisconsin's perennial abundance of powerful offensive linemen into the modern equivalent of Tom Osborne's juggernaut Nebraska program of the 1990s. For the last few decades, Wisconsin has ridden a power run game and scrappy defense to glory, but the kind that falls just short of national recognition as an elite team.

In his first full recruiting class in 2014 and the class being built for 2015, Andersen has taken eight Wisconsin kids averaging 6'5, 280 pounds. He's also taken eight Florida kids averaging 6'0, 183 pounds. The strategy is straightforward. Andersen is picking off Southern athletes to bring the needed speed to the existing power.

After a realignment that seems to have been drawn up with the use of a map and ruler, Wisconsin finds itself in the Big Ten West. If you recall where top college football talent comes from, you'll notice resources and football tradition are pretty concentrated in the East. Consequently, Wisconsin has arguably the easiest path to the Playoff in all of college football over the next few years.

Meanwhile, Les Miles has kept the Bayou Bengals in annual contention, but the 2014 Tigers are building for the future. Their 2014 class was ranked second nationally by the 247 Sports Composite, a distinctive recognition. But that ranking fails to capture how LSU landed exceptional talent at key positions for the Tiger system.

They landed a strong-armed, four-star quarterback named Brandon Harris, who's likely to become the starter before the season is over. He has both the arm strength to push the ball vertically in OC Cam Cameron's Air Coryell passing game and the athleticism to make something happen if the deep receivers aren't open. Cameron also scored a wide receiver with NFL size and attributes in Malachi Dupre, a five-star player who's 6'5 and a devastating deep threat.

Miles' downhill running game picked up a five-star RB in Leonard Fournette, along with three four-star offensive linemen and a four-star tight end. All that will maintain the Tigers' ability to build massive walls of human bodies.

Their defense also added key features for their system: a big athletic safety to control the middle, long and tall cornerbacks, athletic linemen, and a few linebackers who will sit and learn. When this crew becomes upperclassmen with a few big SEC games under their belts, they could be favorites to win Miles a second title.

But what about this year? And why are they playing each other in Houston?

One strategy for Andersen and his staff has been to take two- and three-star players from powerhouse high schools in places like Ft. Lauderdale or Dallas, to build future pipelines in these athlete-rich regions. They have not yet penetrated the Houston market, with no Texans on their roster -- but three from Dallas on their 2015 commits list.

Meanwhile, the tragic aftermath of Hurricane Katrina caused a massive relocation of Louisianans to East Texas. Given that Houston is the closest metro talent base to Baton Rouge besides New Orleans, it's a major recruiting priority for the LSU staff. And of LSU's last 13 Texas commits, only three were from the Houston area.

This was reflected when Miles noted Texas didn't have any players drafted by the NFL in 2014. "The Mad Hatter" didn't take to Twitter just so he could laugh at the Longhorns' expense. This was a deliberate recruiting pitch to Texan athletes to go to LSU if they wanted to maximize their pro potential.

And what does the outcome tell us about each team's development toward becoming 2015-2017 juggernauts?

Wisconsin's offense has the experience advantage when it takes on LSU's defense. The Badgers OL has four returning starters from a group that punished Big Ten defenses with the fifth best rushing S&P offense in 2013. They have two quality tight ends, a bruising fullback, top tailbacks Melvin Gordon and Corey Clement, and they're likely to mix in dual-threat QB and part-time safety Tanner McEvoy as well.

As far as tactics, they're only tweaking the existing Badger formula, adding some quarterback option reads to the zone/power run staples. There's been talk of Andersen bringing more spread elements to the Wisconsin system, but in reality, they aren't looking to spread defenses out with formations so much as add shotgun option reads to the existing offense.

Gordon made a big name for himself in 2013 running an inside zone/jet sweep play that wreaked havoc early in the year, before opponents finally managed to adjust.

As devastating a weapon as the jet sweep was for the Badgers, it's not a play to build a game plan around, because of its inherent limitations. It's easy to diagnose, since the defense can take note of the fact that Gordon has to line up at wide receiver. It's slow-developing, since he motions across the backfield. And all of the built-in constraints have to be called by the offense before the snap, so there's no read for the QB after the snap.

In the clip above, Arizona State has a safety dropped down to take away the outside angle for Gordon. The play was still effective, because it involved Badger tight ends blocking on the perimeter and because Gordon is such an explosive and fluid player.

The Tigers will have a plan for the sweep and won't be quite as concerned about defending in space. It's the power run game they need to be concerned with: 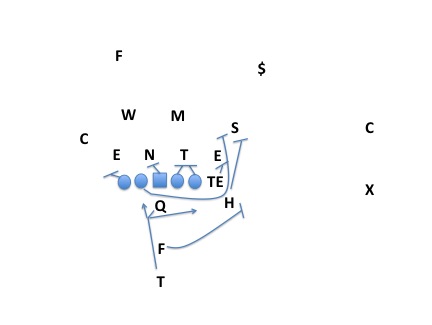 This is Wisconsin's favorite way to run the play against the types of fronts the Tigers will bring to the fight, with counter action. It's a standard play that's been around forever. The key is how effective the Badgers are executing it.

The pulling guards are quick, decisive, and powerful on the move. It takes a lot of reps to get your guards comfortable with analyzing blocking angles while running, but the Badgers clearly dedicate the necessary practice time to get it right.

Secondly, the ancillary blockers are all very effective. Wisconsin can use a two-TE set with Sam Arneson and Austin Traylor and have a lot of extra force on the edge. They can also trust fullback Derek Watt to make the necessary kickout block that opens a pathway for the pulling guard to blast through. When these blocks go well, the play becomes a test of strength between the mike linebacker and the guard, which is a battle the offense will almost always win.

Finally, there's the counter action and reads by Gordon, which makes it all come together. His initial path takes him to the weakside of the formation, which the guard is pulling away from. The goal is to freeze defenders and buy time for the tight ends, fullback, and guard to win angles at the point of attack.

However, Gordon possesses the vision and one-cut ability to read the linebackers and punish them with the cutback if they fly too hard to beat the blocks:

The ability to execute a cutback on a power run and consequently threaten both sides of the play simultaneously like this is fairly rare in running backs. It makes the play impossible to consistently stop. The best bet for LSU would be relying on team speed to fly to the point of attack and outnumber the bigger Badgers. But with Gordon running plays like the jet sweep and power/counter, it becomes very risky for the defense to get to one spot quickly without being punished by cutbacks and constraints.

Still the best in the Big Ten West

SEC fans may scoff. But this will be one of the most bruising offenses on the Tiger schedule, perhaps behind only Alabama and Auburn.

Meanwhile, LSU loses strong safety Craig Loston, along with both starting defensive tackles. While their pass defense should be able to handle the Badger air game without a lot of safety help and allow aggressive play against the run, the Tigers may still struggle to control Wisconsin's ground game.

The nickel and dime packages that make LSU so nasty on defense won't be of much use when the Badgers load the line and backfield with sturdy cheese-eaters. The Tiger linebacker group that weighs 218-235-216 will be put to the test early. Can it handle Gordon in Wisconsin's power run game?

Wisconsin has to hope not, since its own receiving corps was gutted by graduation and the Badgers aren't yet sure who the starting quarterback will be.

So the game will likely come down to run defense. Wisconsin is beginning a move away from 2013's two-gap DL techniques in favor of building defenses with more overall speed both on the line and in the defensive backfield. They don't have the same experience and size up front that they relied on to slow Ohio State's punishing run game last year. They'll be strong, but likely less so than in 2013.

The Badger secondary was vulnerable in 2013, but they return four main contributors from a unit that was very young last year and will be pitted against an LSU passing game that will rely on freshman to execute a precision-based attack.

The main thrust of the Tigers' plan will then center around their own bruising run game. Conceptually Wisconsin and LSU are very similar in their schemes, but the Tigers put a greater emphasis on their stretch-and-hammer zone running game, which gets their backs cutting upfield behind a fullback: 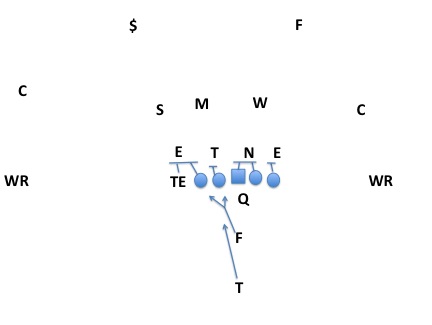 LSU can run this to the tight end side or the weak side. The line employs zone principles, with lateral steps before looking to drive or seal defenders.

The ability of the Tiger blockers and running back to read the play after the snap, combined with the tactical insertion of a bruising fullback coming downhill along the line, makes this a very steady and challenging play. When combined with the rest of the Tiger run game and Cameron's downfield attack, defenses are often over-stretched and unable to cope with the athleticism and power.

The Tigers lose longtime hammer J.C. Copeland, their 270-pound fullback of the past three seasons, but new starter Connor Neighbors was already splitting time with him in 2013. There shouldn't be any real drop off in play.

The major difference between the programs in this matchup is that Wisconsin's most explosive player, Gordon, is already an established feature of the offense. LSU's most dangerous players are going to have to be brought along before they fully realize their potential. In a contest between comparable opponents, you generally want to side with the star player who's best positioned to take over the game.

That's alright for LSU, though. This teams will meet again at Lambeau Field in 2016 and perhaps in a future Playoff game. Then they can continue to hammer each other with even greater implications from the result.