The Bulldogs suspend a lot of players, in part because their rules are stricter than their peers'.

Former Georgia Bulldog and current Auburn quarterback Nick Marshall's absence from SEC Media Days hinges on his citation for marijuana possession. Marshall's status for Auburn's kickoff against Arkansas is TBD, but there'd be little clarity if Marshall was still a Bulldog, from where he was once dismissed for his alleged involvement in a robbery.

UGA has enacted and utilized one of the strictest drug policies in the SEC during Mark Richt's time in Athens. In 2012 Richt defended his policies after another offseason of player dismissals, including multiple starters: 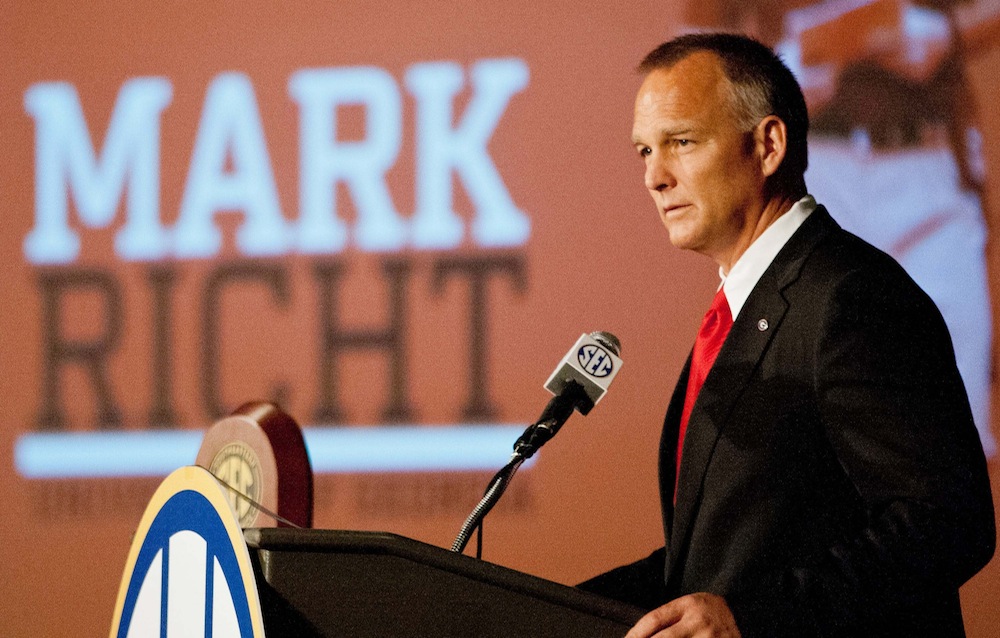 "I think every university has the right to decide what's in the best interest of their student-athletes. We at Georgia have got our policies there for a reason. We don't want guys to get into that type of thing. When a guy makes a mistake, you want to stick him. You want to hopefully have a discipline that would teach a lesson and be painful enough to where they wouldn't want to do it in the future. I don't think there will ever come a time in college football where everybody has a uniform policy in those issues. But I do think we're doing the right thing for Georgia. Everybody has a right to make their own decisions."

UGA's penalties for positive drug tests are significantly tougher than those of every other public school in the SEC, save for Kentucky. Georgia and Kentucky are the only two public schools that have policies requiring suspensions for first offenses.

Two years later, Richt hasn't changed his stance, elaborating his intent on Thursday morning and refuting the concept that Georgia has put itself at a competitive disadvantage in the league with the drug policy:

For more on the Georgia Bulldogs

"We're not worried about that part of it. We don't want our guys to do drugs. I don't want my son to do drugs. We've got policies that are stronger, maybe, than some when it comes to the punitive part of it. 'Well, Georgia ends up suspending guys sooner,' which I've got no problem with. But we've got the ability to get them counseling and make sure they're healthy."

So far this season, only one UGA player -- Josh Harvey-Clemons -- is slated to miss time in 2014 because of a drug offense. The safety transferred to Louisville after multiple violations.

"We've got a very good group of men, and the fact that our policies are tougher doesn't bother me."

"There's a punitive part, an educational part, and we love 'em," Richt said. "You've made mistakes, now let's turn in the right direction and become a better man for it. I'd rather them have that experience in college than have them get fired from their jobs for something that never got nipped in the bud during their college days. We've got a very good group of men, and the fact that our policies are tougher doesn't bother me."

While he might not worry about a competitive disadvantage, Richt has stated in the past that he'd prefer league members move closer to Georgia's end of the drug policy spectrum.

"I'd love if everybody had the same level playing ground. That would be great. But I don't think we should go towards them to get a level playing field. I'd rather they come to us," Richt said to the Macon Telegraph in July of 2013.