38 miles from The City That Never Sleeps, Rutgers goes B1G

Share All sharing options for: 38 miles from The City That Never Sleeps, Rutgers goes B1G

The idea that New York City is a Rutgers town has to be something a PR firm lazily coughed up on a deadline.

New York doesn't uniformly rally around one of her professional teams, and it's too full of people who came from somewhere else to be strongly associated with a single university. College football isn't even part of the city's identity; the Pinstripe Bowl and maybe one regular season game at the Meadowlands make for pretty thin gruel to feed eight million people.

Besides, if New York were to embrace a college football team, it would need to be one with the city's sometimes-right-but-frequently-wrong sense of self-importance. And it certainly wouldn't embrace a conference. Membership in one doesn't fit with the feverish belief that New York City is grittier or artsier or more authentic than anywhere else on the planet. A conference is ostensibly a place for peers and equals. New York doesn't believe it has any.

The R B1G Party -- their terrible name, not mine -- was thrown in Piscataway Tuesday evening to celebrate Rutgers' official entry into the Big Ten. The tenor never felt reminiscent of New York. There was no inflatable Statue of Liberty, no catering by some well-known chef, and I counted as many Yankees hats as Memphis Grizzlies ones.

Take, for example, the informal poll I conducted of about 20 different people in attendance. I asked them each if there was one Big Ten team in particular they were looking forward to seeing Rutgers play. Two said Maryland, one said Ohio State, and one said Michigan. The other 16 said Penn State, or some "that school which shall not be named" phrase that meant Penn State.

The reasons they gave were varied. Some wanted revenge for Penn State's 22-1 record against their school since 1950, some thought it would be a good competitive benchmark to see how Rutgers would fare in its new conference, and (many) others just hungered to see football pain visited upon their friends/neighbors/coworkers/family who can't shut the hell up about the Nittany Lions. 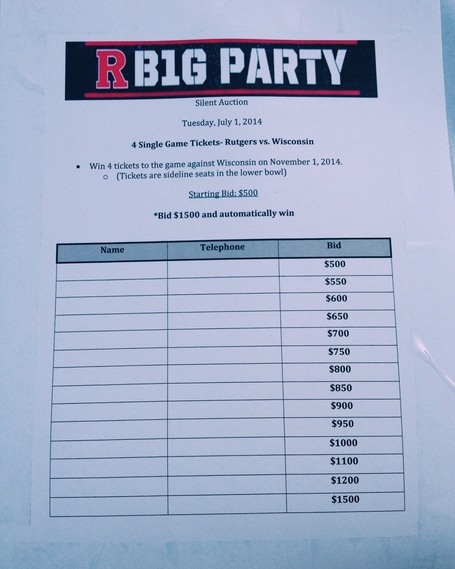 Not named by those polled as an anticipated Rutgers opponent: Wisconsin.

The findings from that limited data set were confirmed when the emcee brought out the mascots and cheerleaders from the other B1G schools one by one. The crowd greeted every team with a smattering of polite applause and cheers. Iowa, Purdue, Nebraska, Ohio State. None of the polarization you might expect.

Until the Penn State cheerleaders came out and, oh, the boos. Boos with that tone that means "we're sort of just kidding around but also we sincerely hate everything you stand for." Boos that said "I've heard enough about Linebacker U from my Uncle Joey for the last 20 years, and if we beat you by 30 I'll still wish it had been 60." These were boos that had regional meaning behind them, and that region was suburban New Jersey, not New York City.

The Big Ten, for all its video presentations shot in Midtown Manhattan, knows this. Big Ten Network president Mark Silverman  announced that the Rutgers-Penn State game on September 13 would mark the first-ever road trip for BTN's studio show. One suspects that the conference is more concerned with proving to advertisers that New York City is a Big Ten Network town, rather than a Rutgers one. 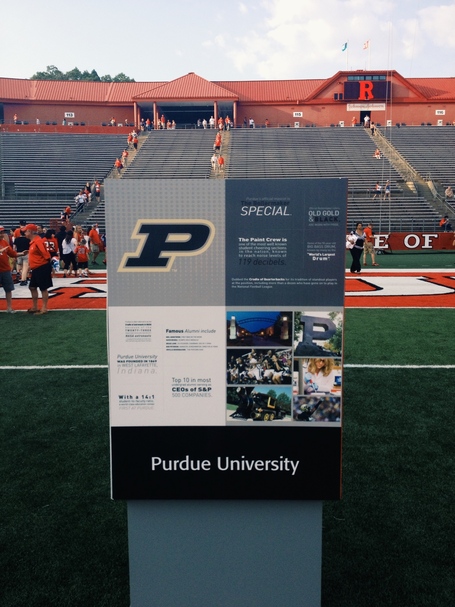 One of the informational stands at the R B1G Party. There was a quiz.

The whole thing felt more like a county fair. Families set up picnic blankets on the field and walked around spinning raffle wheels, gliding down inflatable slides, and eating soft pretzels. There was a silent auction, though when I checked it halfway through the night only a few of the prizes had multiple bids, and many had none whatsoever.

The Big Ten had also set up a mini-museum of sorts, with displays giving the visitors facts and figures on each of the other conference schools. An event worker was handing out drawstring bags to those who successfully filled out a short quiz on the display.

Conference commissioner Jim Delany was there, dressed as if he were attending the wedding of some family friend he didn't know all that well. And, much like a governor in a district he's not worried about winning, Delany received his gift from the school, took a few pictures, spoke for 45 seconds at most, and left.

Toward the end of the proceedings, when head football coach Kyle Flood took the stage, he led the crowd in a chant of "R" and "U," urging the fans to be loud enough that their neighbors to the South and West could hear them. New York City was 38 miles to his East. Nobody in the crowd seemed to notice the omission.

Big Ten expansion: Who's next?