Clemson-Georgia 2014 will be strength vs. strength again ...

... but with different strengths this time. The two quarterbacks from last year's 38-35 shootout, a Clemson win, are gone. Now it's all about Clemson's ferocious defensive line vs. Georgia's all-world backfield.

Share All sharing options for: Clemson-Georgia 2014 will be strength vs. strength again ...

Last year's opening contest between Clemson and Georgia provided an excellent preview of what fans of both teams were in for in 2013.

Early on, the Georgia offense looked dominant, with three first-half touchdowns and Todd Gurley opening the game with a 75-yard TD run ... before pulling his quad and becoming unable to continue to spark the offense. Injuries to key skill players defined an 8-5 season in which quarterback Aaron Murray was forced to carry the weight of a team whose best offensive players available varied wildly from week to week and whose defense squandered elite athletes.

For Clemson's part, it actually had a strong season with 11 wins, including a bowl victory over Ohio State. But the hopes for a team with veteran QB Tajh Boyd and an elite playmaker at receiver did not include blowout losses to rivals Florida State and South Carolina.

Both teams probably have lower expectations in 2014 -- at least until one of them wins this game and sends its fans off on an irrational hope binge.

So how will this year's game go?

When Georgia has the ball

With Murray and tight end Arthur Lynch departing, the Georgia offense is obviously going to center around the talents of Gurley. The Georgia star overcame nagging injuries in 2013 to run for 989 yards and turn Murray checkdowns into 441 receiving yards. In the bowl game against Nebraska, Gurley took up the challenge of carrying the Georgia offense and produced 183 total yards.

The question is how exactly Mark Richt and offensive coordinator Mike Bobo will build a complete offense around Gurley and the three other blue-chip running backs behind him (Keith Marshall and freshmen Nick Chubb and Sony Michel). The line loses three seniors and hasn't been a dominant group in recent years. However, the Bulldogs do have some pieces that can fit together to build another ball-control offense that could become elite.

The emergence of fullback Merritt Hall has allowed the Dawgs to move the 6'2, 257-pound Quayvon Hicks out to tight end, where his speed and fluidity can allow him to be a matchup weapon and a hard surface on the perimeter. They also return junior tight end Jay Rome, a 6'6 cover nightmare in his own right, and veteran receivers Malcolm Mitchell (the star who was lost for the season during last year's Georgia-Clemson game), Michael Bennett, and Chris Conley.

The sum total of these parts is likely to be a multiple offense that expands on what Georgia used against Nebraska. The Dawgs use this versatile collection of players to help Gurley find room with different varieties of zone running schemes.

First, there will be plenty of zone lead concepts comparable to what LSU uses. However, Georgia's prospective offensive line is likely to involve some combination of Kolton Houston (6'5, 280), Greg Pyke (6'6, 326), center David Andrews (6'2, 295), Mark Beard (6'5, 300), and John Theus (6'6, 298). With the exception of Pyke, this isn't a group that's going to plow straight ahead like the LSU crowd. It will thrive more when having Hall lead Gurley to the perimeter around stretch blocking or against the grain to the cutback on inside zone.

Georgia also has some other strategies for creating space for Gurley in the run game. Mason's athleticism and size make the zone read a viable strategy, and Georgia has a comprehensive way to run it: 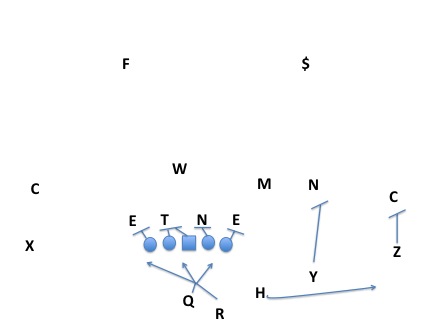 Georgia isn't leaving a defensive lineman unblocked on these concepts. Instead they are having Mason read the linebackers to determine where to send the ball.

In the first clip, the read-side OT steps out and blocks on the backside of a zone run. Mason reads whether the linebackers are aligned to stop the bubble and whether they flow to Gurley or maintain gap integrity in the crease inside the tackle. If they flow too hard in either direction, Mason will cut upfield.

Ideally, this is going to be a handoff to Gurley, who runs behind the double team. Georgia's good at teaching tackles to adjust to the leverage by the defensive end. When that DE comes inside, the tackles often get outside and seal him inside so that Gurley can also bounce outside if the double team doesn't create an enticing crease.

In the second clip, Mason reads the linebackers and threatens with the bubble screen, while Gurley gets the handoff and wins the edge.

These concepts make use of Mason's running ability as well as Georgia's ability to field some dangerous bubble screen players. If Hall or Hicks is aligned as the H-back, then Georgia can threaten both with a zone lead concept that uses the H-back as a lead blocker and with a bubble screen. If they play Hicks or Rome at the Y, then the Dawgs also have some big blockers on the edge to block for the bubble.

With these different players operating in unison, Georgia can threaten multiple parts of the perimeter with power and prevent defenses from rallying defenders to Gurley.

Of course their passing game will also need to land some big plays and threaten downfield, but you can expect plenty more checkdowns from Mason to Gurley:

All that said, it will be difficult with this packaging to make much headway against Clemson. The Tigers return a loaded defense that includes the devastating Vic Beasley, he of 13 sacks a year ago, and up and comers like strong safety Jayron Kearse.

It's worth starting with Kearse in order to understand how the Clemson defense uses his skills to unleash Beasley. Because of the 6'4, 205-pound athlete's ability to play in the box and run with receivers in pattern-matching coverage, Clemson can vacillate between cover 3, quarters, and man 1 blitz coverages while easily disguising intentions.

Kearse will often play on the edge and be an extra man in the box in Brent Venables' cover 3 schemes, which allows the Tigers to use five-man blitzes. These essentially create one-on-one matchups for Beasley. For instance: 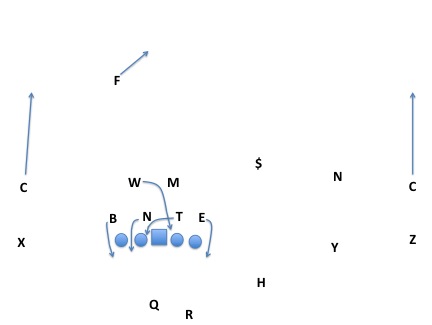 Picture Beasley as that "B" and imagine how many college left tackles can handle blocking him in space without help, as this blitz calls for. The answer is "not many." Gurley probably isn't winning the edge against one of these blitzes, there are linebackers in the box to stop Mason on the run, and Kearse (the "$") can help corral the bubble screen.

They can also use blitzes like this to stunt Beasley inside and destroy the run game:

The checkdown to Gurley on a pass concept? Good luck finding time to get that route open with Beasley coming off the edge. And tight ends Hicks and Rome won't be the easy matchup wins for Georgia against Kearse's 6'4" length. Last year Clemson struggled to control the middle of the field with their safeties:

With Kearse stepping up and steady free safety Robert Smith in the middle, Clemson should be stronger defending the middle of the field in coverage. Without easy reads and throws to the middle, the pass rush will be even more lethal.

The Dawgs need find some more weapons on offense, particularly at receiver, or the Tigers are going to be a very difficult opponent to move the ball against. Mitchell's return from injury needs to be total.

When Clemson has the ball

Clemson stands to become less dynamic on offense with senior Cole Stoudt likely to replace Tajh Boyd in Chad Morris' "smashmouth spread" offense. While he's a senior who's sat, watched, and developed, much like Mason at Georgia, Stoudt can't run like Boyd did, so he may struggle to unlock the full potential of Morris' offense.

Meanwhile, they replace the super explosive Sammy Watkins, who made the passing game something to be greatly feared.

Clemson-Georgia should happen every year

Clemson-Georgia should happen every year

What Clemson does have are several solid players who have been in the system for multiple years serving as role players, along with a young OL that includes athleticism at tackle and a pair of guards who will weigh 340 and 345 pounds respectively (Kalon Davis and Tyrone Crowder). Clemson's inside zone and power schemes should benefit from the added bulk.

With Stoudt leading the way, you can count on an offense that's well-drilled and well-designed, if not as explosive. A defense that can't play the option soundly, can't cover with discipline on the outside, and can't tackle will still be diced apart by these Tigers. Last year's Georgia team didn't do these things reliably well.

Of course, there's always the chance that young players like Germone Hopper or Artavis Scott will step into the void left by Watkins sooner than later. If those youngsters prove ready to be pitch men or deep threats, then Georgia defensive coordinator Jeremy Pruitt will have his hands full getting his charges up to snuff on option fundamentals.

Much like his counterpart Venables, Pruitt has a ton of weapons for attacking the Clemson offense and creating negative plays or turnovers. He'll likely make use of overload blitzes like this to handle the option: 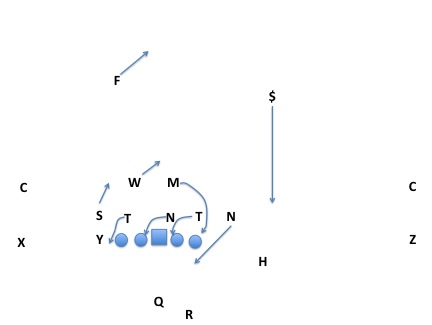 In the clip, the offensive tackle follows the defensive tackle inside, leaving the running back to block the nickelback coming on the blitz. By the time the mike loops in and joins the party, there's no one left to stop him from taking a free run at the quarterback.

Overload blitzes to the read side of an option play are a favorite Pruitt strategy for handling attacks like this. They position defenders to make negative plays by tackling either the QB or RB, discouraging the option. And they still leave defenders in position to cover the bubble or other quick passes.

Overall, the problems for Georgia's defense are not in their front seven. With outside linebackers Jordan Jenkins and Leonard Floyd alongside inside linebackers Ramik Wilson and Amarlo Herrera, the Dawg LB corp has arguably the best combination of size and speed in college football. With all these weapons, Pruitt's blitzes are going to be difficult to handle.

The problems are in the secondary, where a unit that didn't perform exceptionally well in 2013 loses quality athletes like Shaq Wiggins and Josh Harvey-Clemons, who transferred to Louisville to rejoin former coordinator Todd Grantham. 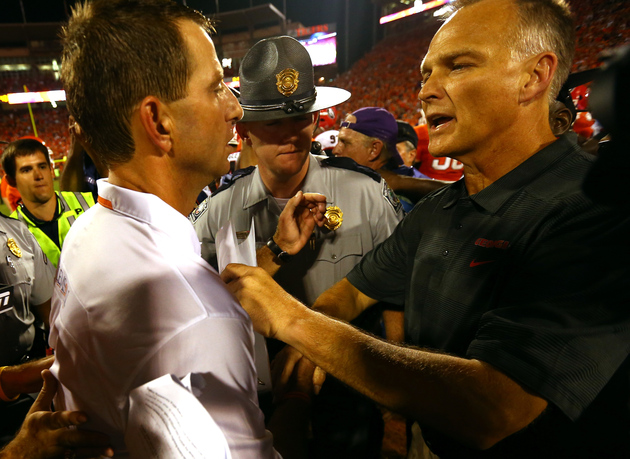 If Stoudt and the Clemson passing game can find some weak spots in the Georgia secondary, then that and what's likely to be a strong defensive effort should bring down the Dawgs. However, if Pruitt has Georgia's defense playing sound, aggressive football, this opener could be a defensive struggle that contrasts strongly with last year's shootout.

Clemson has a small advantage in how well its defense is positioned to handle Georgia's offense. But this will be a night game in Athens, which will really help the young Dawgs. The most interesting storyline to come out of this game will likely be which team's young stars assert themselves and who will define these programs' offenses in future days.

The team that best answers that question will be the one that has the more hopeful 2014.