How to make a 2014 preseason college football top 25

Preseason college football rankings are very important. Did you know you can make your own? Just follow this guide.

Share All sharing options for: How to make a 2014 preseason college football top 25

Since July won't die, and it's been eight years since we've tried to explain how everyone makes their preseason top 25, it's time to revise the rules and explain just how one makes a proper preseason list.

As always: if you do not see your team here, it is because your team is really gonna surprise some people this season and prove the doubters wrong.

To get your preseason top 25 read as widely as possible, it is very important to make a contrarian pick at No. 1.

You don't want it to be totally reckless. Oklahoma is a very, very good football team, and recently beat another team many may put in their top fives. Choosing the Sooners here means you display a note of bravery, but are not insane enough to take the real maverick's choice, i.e., picking a major team that won eight games last year. Oklahoma it is.

There is no justification for placing a team with that much talent and the reigning Heisman winner at No. 2. This is exactly why you should place them at No. 2, because #FSUTwitter will rage, suggest you are a covert agent for The Haters, and begin copying and pasting many, many numbers into your comment section.

Most importantly, they will link to your top 25. Is traffic worth the death threats? We will continue this discussion in the three spot for obvious reasons.

Absolutely, a few death threats are worth the traffic.

Unlike FSU, Alabama's situation is one of real concern this year, at least on offense. But the Tide don't rebuild, they reload, often right into your inbox with astonishing speed. The email headers will be in ALL CAPS; the verdict will be that YOU ARE A CLASSLESS PERSON. Remember, this will happen in a year when they hired Lane Kiffin with a straight face.

One of college football's grandest traditions: selecting Ohio State or Michigan and throwing them at random into the top six. For maximum pseudo-credibility, do not place them in the top three ... and certainly not in the top slot, unless you want the undivided support of Ohio State's online fanbase. (You don't. Some loves aren't worth the trouble.)

Never hurts to put a Pac-12 team way up there, too. It helps to have some novelty here, since just three short years ago this team was losing 50-0 to USC. And you have them ranked above the perennial Pac-12 plug-ins Oregon and Stanford! You're practically skydiving naked into this top 25, you madcap fire-eating daredevil, you.

You can't really touch the topic of Notre Dame without it going sideways immediately, since Notre Dame in any poll starts instantly overrated. Oh, but maybe they're underrated, and you're simply allowing your fear of them disappointing you to overwhelm your critical instincts? They get Everett Golson back at QB, have a good back in Cam McDaniel, and once you take out an October trip to Tallahassee, have a pretty nice schedule and-- and here you are, overthinking and forgetting the number one rule of all: overrated or not, people will click on anything with Notre Dame in it.

Notre Dame is clearly the imaginary sixth best team in the nation.

See everything under the "Alabama" entry, but change the method of delivery. Auburn fans opt for handwritten notes to your mailbox. No, you don't have your address posted on the Internet, but Auburn fans will find it. Every letter with "blessed, and War Eagle," even the ones with scary pictures of you in your gym shorts taking out the garbage at night included.

Sounds decent enough, especially when you reply to any concerns about a decline under the Mark Helfrich administration with the words "Marcus Mariota."

Also, most people have stopped reading the whole thing and are now scanning just to find their teams. Confess light felonies and misdemeanors here. I once peed in a car wash in Charlotte when I couldn't find a bathroom! I feel so much better about things having gotten that off my chest.

Little known fact about the nine spot: it is the spot reserved for the conference the pollster has a painful and obvious bias towards. Sandwich a team with obvious flaws into the top ten. Apply your own biases accordingly, and Go Cocks.

Without even looking, you just plug the other team in the Big Ten Championship Game here. Hey, Michigan State!

Connor Cook provides decent enough cover to obliterate pesky and reality-based questions like "how about replacing some of that NFL-bound defensive talent before you hope too much?"  If pressed further, simply say "I believe Pat Narduzzi will have 'em ready to play." If it works for TV chatter, it'll work for your totally fabricated top 25.

The 11 spot is reserved for the Team You Wish Could Win Everything But Cannot For Many Cosmological Reasons. That would be, for us, the fearless, points-binging Baylor Bears, who do actually return a good bit of talent and will undoubtedly score a zillion points this year and play without an ounce of caution and yet not make the impending College Football Playoff.

Have you mentioned a healing, down-on-its-luck giant of the industry yet? No, no you haven't.

So put Texas here, since Florida's rehabilitation seems even less probable than the Longhorns'. Your easy line of defense: "It won't show early, but look for a change of culture in Austin to yield benefits down the road and later in the season." 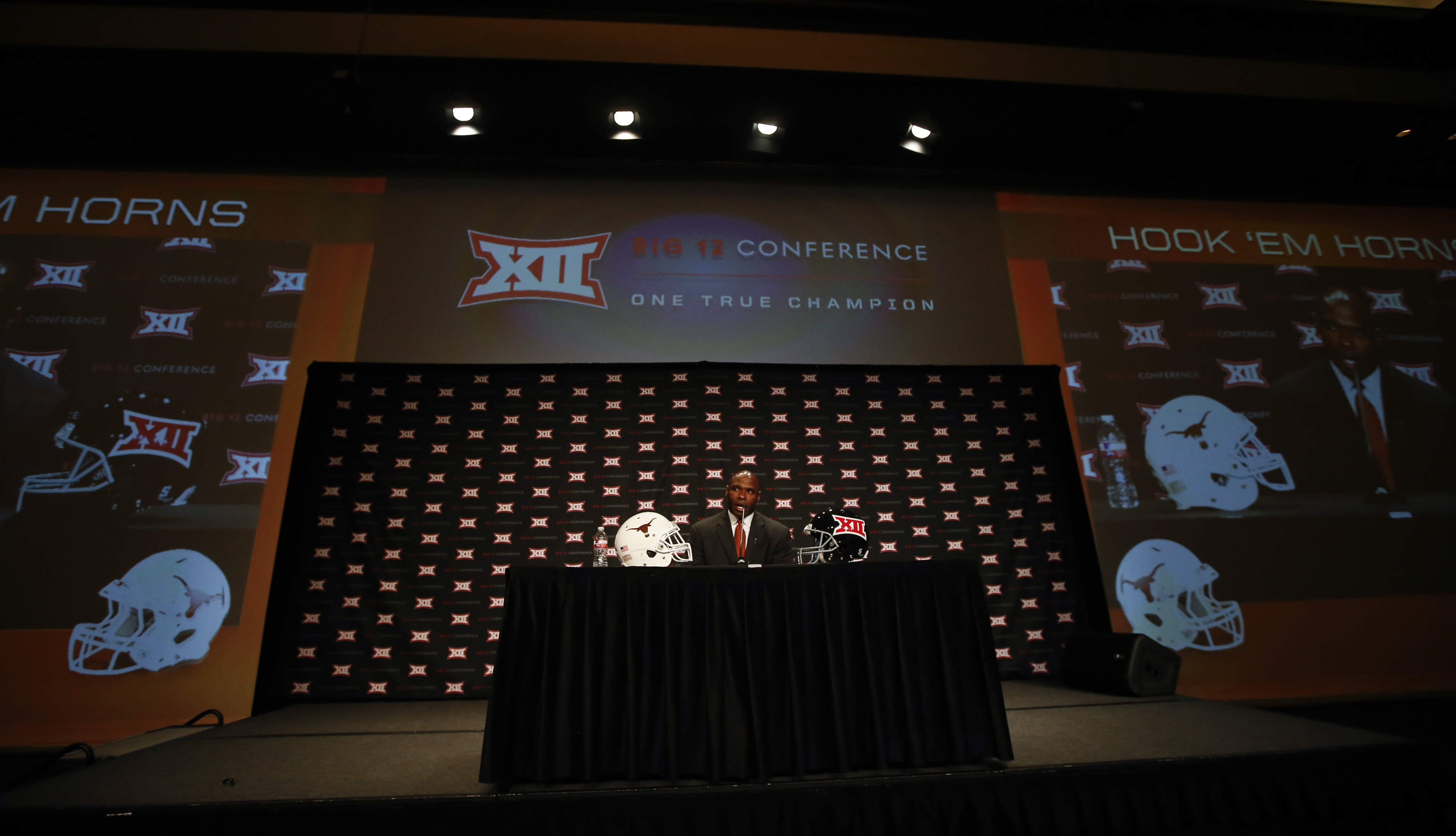 Another arbitrary but effective rule: if you list two Big 12 teams in a row, combo break for maximum effect with a Pac-12 team. Stanford's ridiculously consistent, but not quite explosive enough to include in the top 10, so invest wisely by placing them here.

Bonus: no one on the East Coast will be able to make an effective counterargument, since many have never watched Stanford outside of bowl season.

The mid-teens are all about safe, non-embarrassing choices for predicted success, and despite the Mad Hatter cult and total indifference to modern offense, Les Miles has averaged 10 wins a year going into this 10th season as LSU head coach. More remarkably, he's done that playing personnel like Jordan Jefferson at quarterback.

You can really put LSU anywhere in the top 15 and simply cite the difficulty of schedule when pressed as to why you don't have them higher.

Just another reflex you need to develop: if you have not mentioned USC by the time you hit No. 15, insert them immediately. Cite perennial bushels of talent and need to fulfill potential.

Remember to mention that Steve Sarkisian is coaching there now, something most people seriously won't recall until they see him on the sidelines and act too embarrassed to ask anyone how or when that happened. If that person asks about where Lane Kiffin went, break the Alabama news gently, or not at all. ("Lane's resting on the farm right now.")

Now you can begin to really have fun in earnest, because no one -- literally no one on the planet -- can argue the qualitative preseason differences between teams in this range.

So put in Wisconsin, an amiable team capable of stealing a Week 1 game from LSU before moving on to their usual 10-2ish campaign through the Big Ten. Um, big grr heavypants man running games.

Crap, you've forgotten Georgia. That's okay, they're replacing a starting QB and switching defensive coordinators, but still get to play Florida as coached under Will Muschamp. So temper any criticisms of their low ranking with "at least they'll win the Cocktail Party," and watch concerned Georgia fans nod along with you before silently mouthing "Fire Bobo" out of habit. 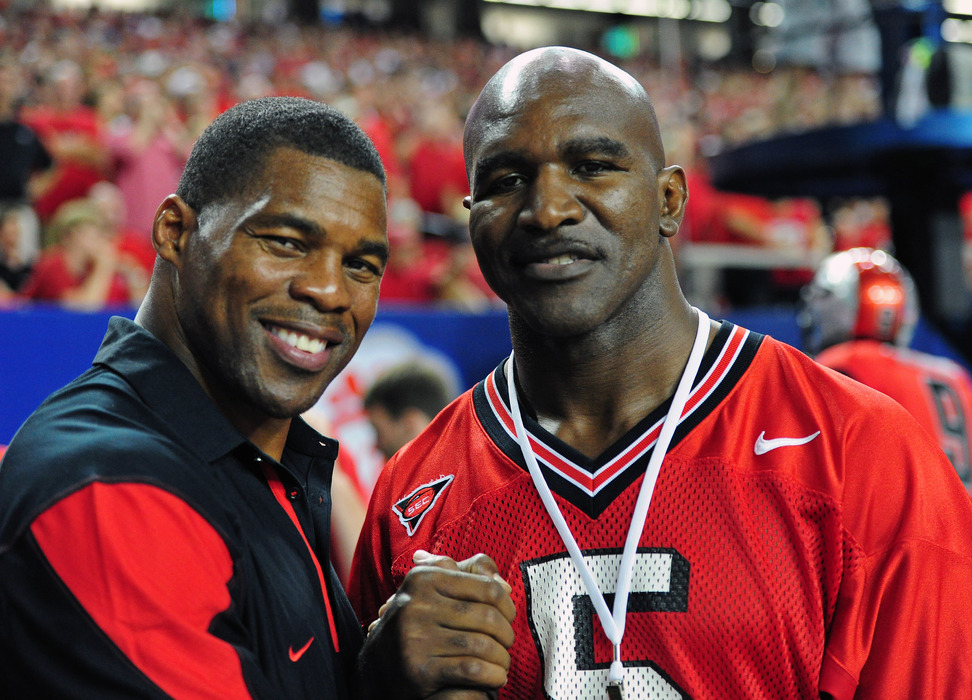 The rare instance where being totally random winds up being pretty accurate. ASU will be talented on offense, but likely replacing too much on defense (miss u, bloodthirsty Will Sutton) to be anywhere higher than this.

And yes: in a pinch, just pick the previous Pac-12 Championship Game loser at this spot. It never looks too wrong.

Another preseason polling rule: Nebraska never looks wrong being ranked 19th. Look at it and you'll see how right we are. It's also as low as you can rank a team without spotting them in the Boise State Tier of Teams What Try Hard In The Football Boondocks.

Another surefire, can't-miss ranking thanks to Bill Snyder either a.) winning eight games with a converted defensive end running the single-wing, or b.) doing far better and making a major bowl with a roster full of JUCO transfers and random young men he pulled off a CFL development squad.

Bill Snyder is a pollster's best friend, somehow entering every year with low but manageable expectations thanks to coaching in Manhattan, Kansas.

You know Bo Wallace's name, and that's enough for the meaningless No. 21 spot. If pressed, just repeat these words: "No one sees them coming, and that's their best advantage!"

This could also possibly be Mississippi State in this spot, but do not ever, ever admit that to fans of either school on pain of lengthy diatribe.

Here is a GIF of Kliff Kingsbury.

Congratulations, now your top 25 is going to do well on Facebook, and no one remembers who you put at No. 22 anyway.

Contractually obligated to appear somewhere between No. 20 and No. 25 per the Boise State Tier of Teams What Try Hard In The Football Boondocks category definitions.

They have a nasty schedule -- FSU in Week 1! -- but as we said, no one's reading, and Oklahoma State fans will probably be pretty happy if you say something like "Gundy's teams produce no matter what the schedule says."

See, you're giving hope, even way down here at the warm, undrinkable last sips of a meaningless preseason top 25. Where's my damn Nobel, Obama?

The final spot in any poll is reserved for a team you just like, regardless of whether they stand a chance to make so much as one meaningful national appearance this season.

East Carolina's ours, both because they have a really devoted fanbase and because they play wide-open air raid nonsense in the hinterlands of the American Athletic Conference on a field with a pirate's logo on it. They will steal a bowl slot from the big boys, and possibly get a slot in the four-team Playoff!

You won't quote me on that, because no one reads this far down, and because no small team will ever, ever get a slot as long as there's a three-loss Notre Dame team waiting at the end of the season. BUT QUOTE US ON IT: ECU TO THE PLAYOFF.

Teams also receiving votes: your team, which is almost right there, and could make some unexpected noise!