The football power has college sports' biggest conference network before it even launches. Now can it also be the best?

Share All sharing options for: The 3 big things to know about the SEC Network for launch day

The SEC Network will launch on Aug. 14 at 6 p.m. ET. After ironing out all the contracts, it looks like over 90 million people will have access to the network, and the network should meet its goal of having 75 million people actually subscribe. That's a ton of people in line to receive 24-hour/365-day coverage of the nation's most popular conference.

But it's still unclear what the SEC Network is going to be. Can it be viable enough to broadcast some of the league's biggest games on a consistent basis? Will it be more PR, more news, or more debate about the league?

1. It already has massive subscriber numbers.

The SEC's and ESPN's negotiations with cable providers were a success.

With those companies on board, the SEC Network will be the largest conference network in terms of subscribers. And on a national level, the SEC and the Big Ten are far ahead of their fellow conferences. With the additions of Maryland and Rutgers, the Big Ten Network is still growing and pocketing millions per year.

Those numbers would mean the SEC Network's ahead of even the NFL Network, which announces its total as 72 million.

The SEC Network will reportedly charge $1.40 per subscriber per month inside the SEC footprint and $0.25 per month outside of it, meaning the conference will be in line for a big pay day. Estimates for the conference's total revenue range from $500 million to over $600 million per year, which would come out to more than $35 million per school (Steve Spurrier has some thoughts about that).

The Big Ten Network costs much less: $1.00 inside the league's footprint — which is why adding New York, New Jersey and the DMV to that area is so important — and $0.37 outside of it. Pac-12 Networks costs its subscribers roughly $0.80 per month.

If things continue to go the SEC's way, it should be the leader of the conference networks from the beginning. 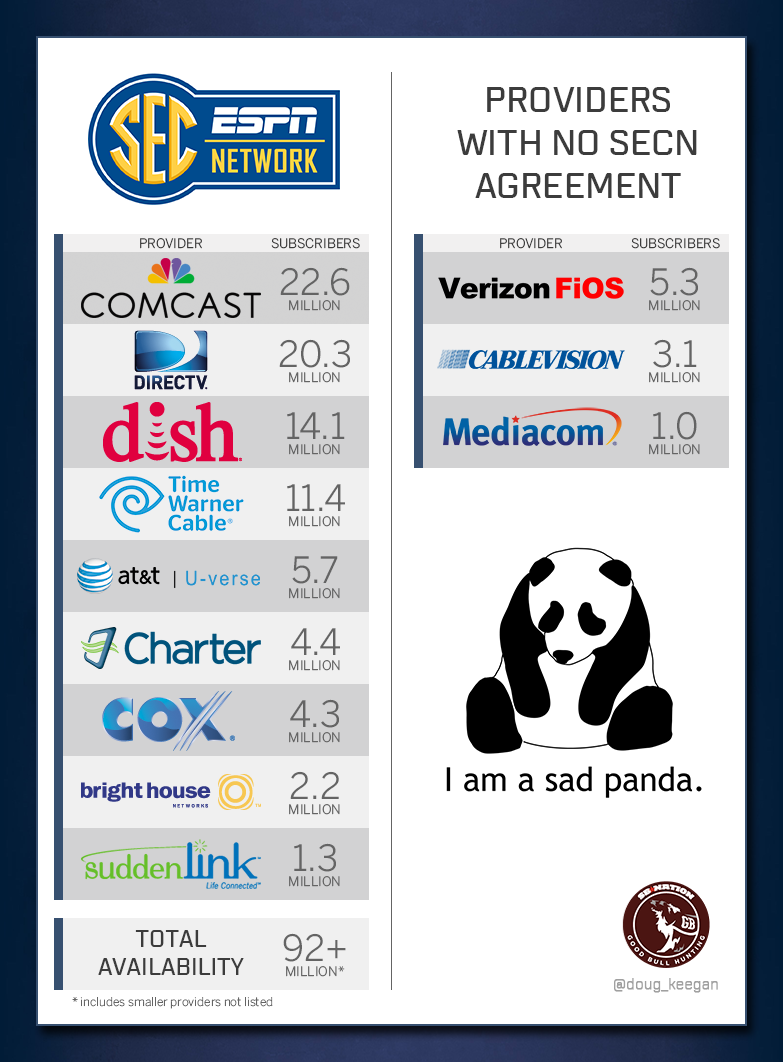 2. The football schedule is what matters most.

It makes sense that the SEC and the Big Ten would be the leaders in network subscribers, since those two have the biggest followings. But the Pac-12 Networks is also behind its brethren due to a major flaw: the Pac-12 is too scared to show its best games on its network.

The way DirecTV sees it, the best football games the Pac-12 offers are already available to its customers. That's because the conference lets ESPN and Fox cherry-pick the top games each week, often just six or 12 days before kickoff. [...]

"Even though it is unwilling to invest its best games into its own channel, the conference has still established a high price for Pac-12 Networks and refuses to compromise," DirecTV spokesman Thomas Tyrer said.

Why should providers or subscribers pay for a network that doesn't show anything interesting? Why should you drop DirecTV for not having the Pac-12 Networks when you can watch all the games you care about elsewhere, then just watch USC beat down Cal at the local bar?

The SEC Network seems to understand that, and while non-revenue sports are important to show from a balance perspective, football games are really all that matter to make money. The network's season launches with a heavyweight fight between South Carolina and Texas A&M, and it includes some respectable games in the first few weeks, like Arkansas-Auburn, Missouri-UCF, and Kentucky-Florida. It's also landed Brent Musburger as its Saturday night play-by-play man.

After that, are we going to see a lot of good team vs. bad team and bad team vs. bad team, or will there be competitive games? You can't expect the conference's best games to be on the network — Alabama-LSU is likely still going to be a CBS game — because that wouldn't make business sense either. But will we see more Tennessee-Florida and games that resonate nationally, or Mississippi State-Kentucky and games that don't?

The most difficult thing to judge a conference network on is what it is at its core. Are these networks public relations for the conferences they make money for, or are they news organizations? The answer lies in the middle, but it has proven to be a difficult balance for the Big Ten Network.

BTN's analysts do a good job of being critical of the conference's teams, and they provide a lot on their Saturday pregame show, which I would argue rivals "College GameDay" in serving news. However, the network has rightfully drawn criticism for its coverage off the field. They have not done a lot of digging into the Northwestern football team's unionization attempt or potential NCAA changes, and their coverage of the Jerry Sandusky saga was virtually nonexistent.

The lack of Sandusky coverage prompted David Climer of The Tennesseean to write that the SEC Network would offer less of a PR approach:

Nobody is saying it on the record, but televising a talk show like Finebaum's is a response to the Big Ten Network's high-road approach to, well, everything. When it comes to its member schools, the Big Ten Network is all kittens and rainbows.

We can infer from the SEC Network's programming that Climer's analysis is probably half-right:

Considering the figures at hand — Finebaum, for staters — it's clear that we're going to be seeing a lot more of ESPN's "embrace debate" strategy, and that probably means a few more feelings will be hurt than on BTN's shows. But it's likely that there will still be a lot of PR.

It's even tough to say that there will be more news on the SEC Network than BTN, given what an SEC Network executive told The Tennessean:

"We're not going to do a lot of investigative journalism, but we are going to report when something happens and let fans know," said Justin Connolly, ESPN senior vice president of college networks, who oversees the SEC Network.

Inside the SEC Network

How schools will broadcast their own games

Inside the SEC Network

The 'SEC Nation' plan How schools will broadcast their own games

That sounds a lot like BTN, which is great at telling people what happened. The criticism with BTN is that it doesn't dig deeper into issues. The SEC Network could discuss those, but nothing yet has suggested that the network will be more of a news service than BTN.

Aside from debate, the network's "Film Room" show, in which a football coach goes over the film from the previous week's game, has the potential to be great analysis for hardcore fans and something that isn't offered on the SEC's rival networks. While debate and "SportsCenter"-style shows might be ratings kings, many viewers want more analysis and less arguing. The same goes for the "SEC Storied" series of documentaries.

Another area where the SEC Network can produce exclusive, non-debate content is to do a show that takes a look into its most successful schools. BTN and the Pac-12 Networks have done outstanding jobs with "The Journey" and "The Drive," respectively, to give viewers inside looks into their favorite programs. An SEC football version could be even more popular. The network is showing "all-access specials" inside each team, which should gauge interest.

The programming on the SEC Network will evolve. From the start, it's easy to see there being more entertaining studio shows than on BTN, given the personalities at play, but perhaps too much constant debate. The "Film Room" and "SEC Storied" shows could be great, but the network has to promote them in order to do that.

That balance can be difficult to achieve, but it will be important for the the network to gain respectability as the best conference network in the country -- since it's already the biggest.