All we know about the College Football Playoff right now are that many teams are in the running for it and that all of them are in grave danger.

An instantaneous survey of five teams in the best position for the College Football Playoff's four spots at this very moment, plus the biggest threats looming for each. Be advised: these have nothing to do with the preseason Top 25 polls. If you get mad about this, you will be pointed to the previous sentence.

FSU could be the classic overextension of a franchise without the supporting cast members who made the original edition so great.

Without Kelvin Benjamin, they doubled down on Rashad Greene, who caught 11 passes for 203 yards against Oklahoma State. Timmy Jernigan wasn't there to collapse the pocket, allowing J.W. Walsh far too much time to keep the Cowboys in the game. You got a tremendous amount of Jameis Winston, and like most overstressed characters he delivered less with more. He appeared to be pressing, throwing two interceptions to one touchdown.

But they won, 37-31, and did so while playing someone. (A someone who looked entirely capable of winning every other game it plays.)  Florida State needs secondary characters to emerge and needs them badly, but the basic framework is still there. Running the ball for more than 3.4 yards a carry? Yes, this seems like a plot point that would help, too.

Threats: Clemson, in theory? Yes, the Seminoles do play Clemson, and in theory they could lose to Clemson, a team that just spent a night facedown smelling the turf of Sanford Stadium in a loss to Georgia. Louisville is on a Thursday night on the road, and represents the greatest threat of a loss in between. Notre Dame is also lurking there, and looked lively enough in blowing out Rice in their opener. The rest of FSU's schedule is an ACC schedule, and that is not meant to be a compliment to anyone.

It is so early, but you have to balance the idea of projecting out a team's value against the little you know.

We know Texas A&M looked capable of scoring 70 against South Carolina on the road in that 52-28 Mongol romp. We know the Aggies' schedule features only two road games of note, Alabama and Auburn, and that for very different reasons A&M presents hairy challenges for both. We know Kenny Hill has wideouts to throw to -- giant, speedy wideouts who make you wonder what recruiting tape your coaching staff hasn't been watching that only Texas A&M has.

The Aggies look capable of flat-out destruction. If that means letting you have 39 points to their 63, so be it. They have enough explosives to leave a bigger crater than you can.

Threats: Both Alabama and Auburn, their two toughest road games, are games A&M has won under Kevin Sumlin (albeit a 2012 shell of the current Tigers). LSU, which comes to College Station for the season finale, is a different case, having beaten the Aggies twice in physical, bruising fashion. It's okay: Les Miles has that effect on a lot of people, Aggies. Ask Wisconsin, for instance.

You'll have to assume a few things to make this exercise even sort of work. For instance, you have to assume that teams in Week 1 represent mere babies, shadows of what they could become.

Remember last year when Alabama struggled to 206 yards of total offense against Virginia Tech? Not the case today, as Lane Kiffin -- ESPN cam devoted to him and all -- worked 33 points, 30 first downs, and 538 yards of total offense out of his first effort. Yes, against West Virginia, a terrible defense in 2013, but production is production, and it's certainly better than South Dakota's defense against Oregon, for instance. (We think.)

You have to assume that you can eke any meaning out of this, and by extension the following: that an outstanding second half defensively shows Alabama can deal with hurry-up spread attacks in 2014, and that the Kiffin experiment will work nicely as long as he has Derrick Henry and T.J. Yeldon to slam into opposing defenses. Those assumptions aren't as crazy as they sounded in the offseason, and that's good enough for a spot here.

Threats: Only three of them, but they are a hellacious three. Texas A&M comes to Tuscaloosa and seems entirely capable of savaging Alabama's secondary. LSU seems fully operational after a confounding Les Miles Special against Wisconsin. And Auburn is right there at the end in the Iron Bowl, just waiting with an entire year's supply of horseshoes in their asses.

Maybe the dodgiest pick on here over all and HEY HEY HEY STOP THERE ARE GOOD REASONS FOR THIS. Running backs Todd Gurley and Nick Chubb looked like burly gods against Clemson in a 45-21 blowout of the Tigers. That is very exciting, and you should be excited about that.

Now here is why you should temper that excitement. Clemson, under suspicion of entering a rebuilding year, is now clearly past that and into some kind of tear-down to get mold out of the walls. Cole Stoudt looked lost at QB, and the defense had no ability to control the line of scrimmage. Clemson needs six or seven games to just iron out its depth chart, much less get anywhere near the standard Dabo Swinney has built it up to.

That said, Georgia has two astonishing running backs, a mollywhopping offensive line, and a defense still learning a new system that will likely only improve from this point forward. That's a lot to be very optimistic about, and that's before you remember that your optimism is tempered by saying that bitter rival Clemson isn't very good.

See, Bulldog fans? Rationalism is a form of trash talk after all.

Threats: South Carolina looked lifeless against Texas A&M, so consider the Gamecocks to be the most dangerous threat imaginable on September 13, because that's how South Carolina football under Steve Spurrier works. Two physical road games at Arkansas and Missouri in October in consecutive weeks aren't so bad separately, but combined add up to a tough midseason crux for the Bulldogs. 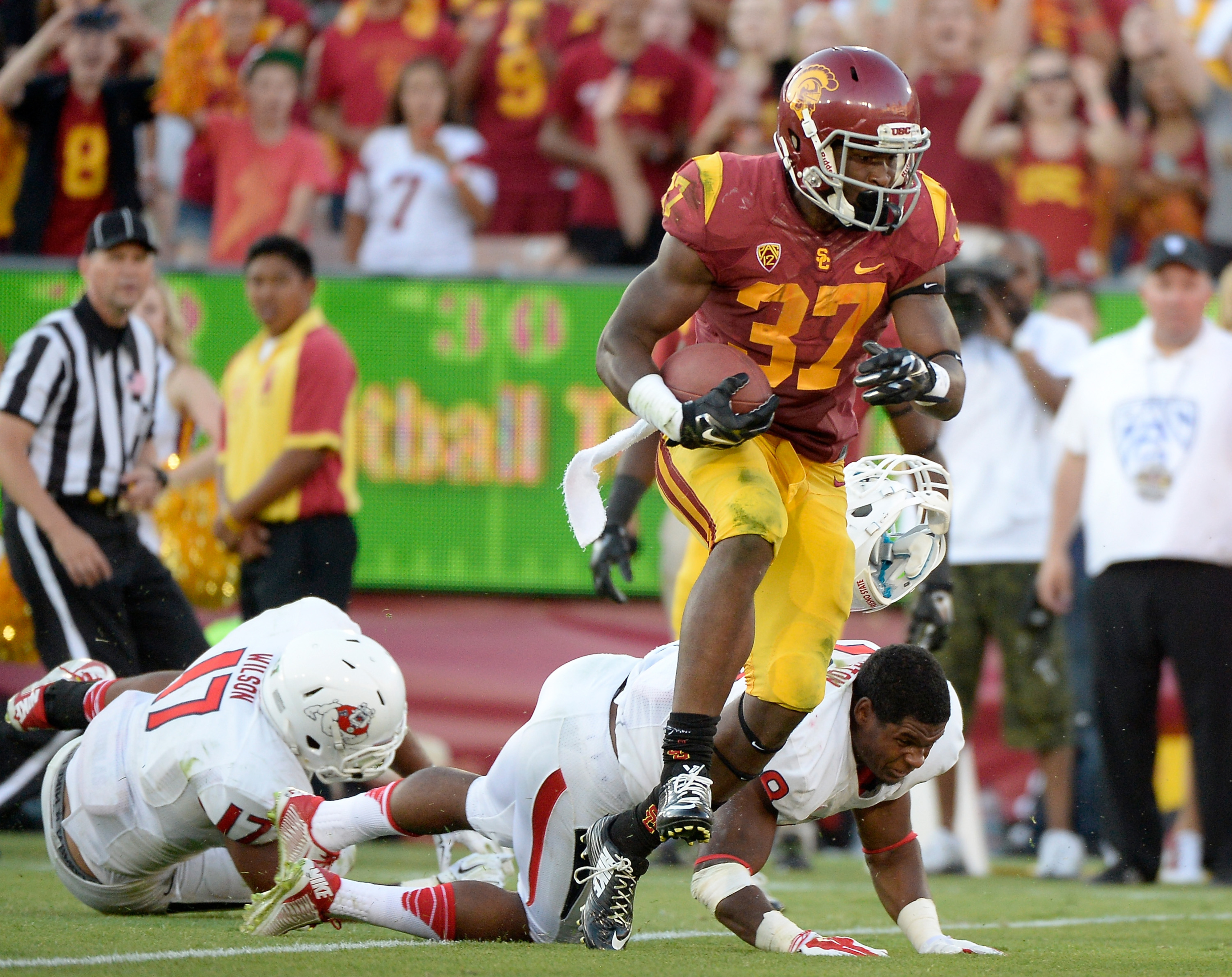 Yes, that's three SEC teams out of four spots, and with reason: the SEC scheduled conference games early, and the Big Ten, Big 12, and Pac-12 did not.

This leaves out-of-conference matchups for everyone else, and those were largely inconclusive or bad in result. Clemson and Wisconsin lost to a pair of those SEC teams. UCLA struggled with Virginia, a sentence that should give every Bruins fan the poop shivers. Penn State barely beat a retooling UCF team in an Irish soccer stadium. Ohio State struggled mightily with Navy. But Michigan played Appalachian State and won! We're all maturing and getting better every damn day, Brady Hoke.

It was hard to look around and find a team that wasn't openly coasting, but there you are, USC, dropping half a hundred on retooled defending Mountain West champion Fresno State and tallying 37 first downs and 701 yards in your first game under a new head coach. The 52-13 margin was 14 points wider than what the Trojans beat the Bulldogs by in their bowl last year.

For that, USC would be first out if the Playoff were held next week. (Which it is not.) (But feel free to freak out about this anyway.)

Threats: Coming fast! USC goes to Stanford next week, where they'll face a Cardinal team that's beaten them in four of their last five matchups. A trip to Arizona and across town to UCLA could be grueling for a team that still has some depth issues.

Teams in the waiting room

LSU, though no one including science can tell you how or why they won their game against Wisconsin.

Michigan State, who plays Oregon next week in Eugene.

Auburn, which produced 595 yards against Arkansas despite starting its backup quarterback.

Oklahoma, because a win against a Skip Holtz team can't possibly get you anywhere in life or imaginary polling.

Notre Dame, if it's so lopsidedly dominant we have no choice but to put it in the pool.

This also overlooks Baylor and whatever it will do Sunday night against SMU, because Week 1's schedule is drawn out forever.