The new College Football Hall of Fame, a digital museum with a leather heart

SB Nation went behind the scenes (and behind those scenes) at Atlanta's College Football Hall of Fame, which opens August 23.

Share All sharing options for: The new College Football Hall of Fame, a digital museum with a leather heart

"It's gotta be fun. It's gotta be engaging. It can't be just a hall of fame," says John Stephenson, the College Football Hall of Fame's CEO and our tour guide. "Most of the building is an attraction you can have fun in, even if you aren't a college football fan."

"The goal was to take everything people know about halls of fame and blow them up."

The new College Football Hall of Fame is fully modern, and seems even more so when compared to the halls in Canton, Springfield, or Cooperstown. This is evident even while walking in.

A radio chip in each guest's pass customizes the experience. Upon entry, you choose which school to associate your pass with (I asked for my alma mater, Kennesaw State, an FCS team that hasn't played any games yet, but Stephenson recommended I pick a school more likely to have content -- so I went Alabama, just to seek total content overload). That chip then takes over many of the exhibits you encounter.

This wall of 768 current college football helmets is automatically lit up depending on whose fans are in the house -- you can see certain helmets lit here in green or white. If fans of every Ivy League team have entered the Hall on a given day, then all of their helmets will glow.

And if a specific fan base is taking over the facility for the night -- an Auburn alumni club or a bunch of USC fans in town for a Peach Bowl -- then the Hall can rig the lights behind the helmets to form a massive Lite-Brite version of that school's logo.

"It's the lowest-technology thing we have in the building, and we can't get people off of it," Stephenson said of the helmet wall. We gawked at it every time we rounded a new floor and got another angle of it, even pausing when we went up the stairs behind it. I took at least five pictures of my alma mater's helmet, and you will do the same.

That chip also generates school-specific content for each visitor at this "Minority Report" wall ...

... and the rivalry corner, where computers will learn of the hatred in your heart and present you with images of football programs you detest, and even the actual shrine of inductees, where your school's Hall of Famers are the first you see.

The full name of the facility is the "College Football Hall of Fame and Chick-fil-A Fan Experience." The actual Hall, the part where 1,100 players and coaches are enshrined, is a dignified shrine ...

... and yet there are no bronze busts or plaques. You'll use one of 10 screens to flip through enshrinee profiles, which is strikingly similar to the way it works on the Hall's public website. Desmond Howard demonstrates by finding himself:

This means the Hall can add inductees for decades without taking up any more space.

The rest of the technology throughout the building, which Stephenson describes as "bright lights and big noise" in comparison to the silent dome that houses the inductees, is no doubt impressive. The "Fan Experience" portion includes:

* ... often connecting specific sponsors to elements of college football. The uniform history timeline is brought to you by Under Armour. There's a display with a car, sponsored by Kia. The whole area is sponsored by Coca-Cola. And so on. This is Atlanta, where everything is sponsored. And considering the sport's postseason is sponsored by everything from credit card companies to Bitcoin, The Corporate Experience is really not out of place in this museum.

The non-power-school representation is better than might be expected, with small displays of service academy and HBCU materials, a jersey honoring Division III titan Mount Union, and an NAIA trophy.

And if nothing else, Central Connecticut State's piece of the wall of helmets is just as big as Notre Dame's. 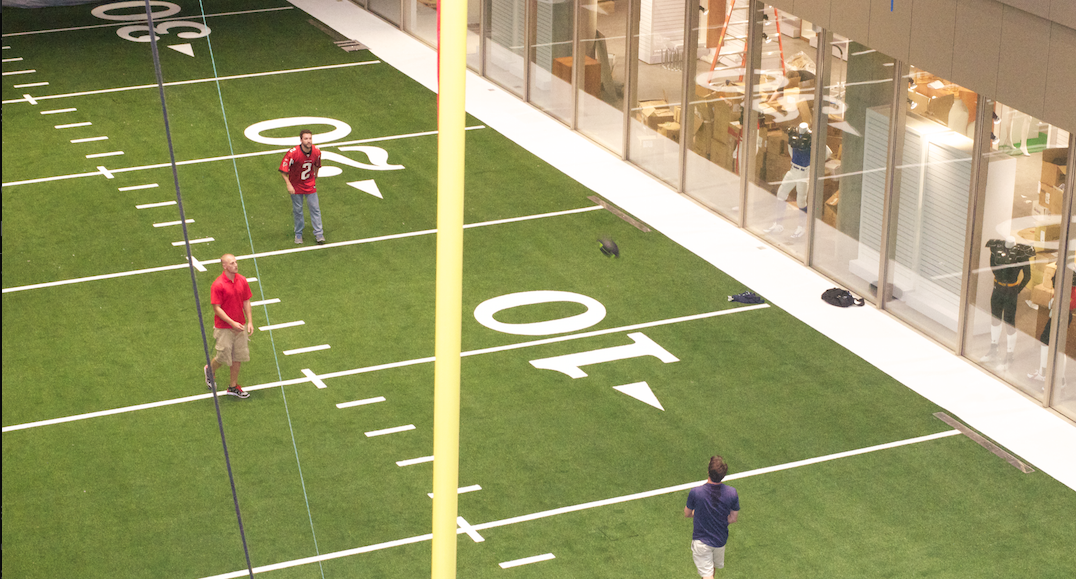 This 45-yard playing field, which resembles a decent indoor practice facility, will be used for luncheons and banquets (and the enshrinement ceremony), including a gathering of SEC Network execs during their first football game broadcast on August 28. You enter it through a tunnel, which boasts traditional touchables like Notre Dame's "Play Like a Champion Today" sign and LSU's "WIN!" bar. It also has an enormous video board and physical challenges, like kicking regulation field goals. Portions of it are of course sponsored by Chick-fil-A.

It's cool, and it also takes up a whole lot of space. It'll be perfect for groups that want to pay money to rent out a college football-themed room. And no museum is feasible for parents unless it includes an area for kids to run around in. But some fans will wish for another wall or two of historical exhibits, even if that would've meant a smaller or shorter banquet hall.

That "lower-technology" lament of Stephenson's will resonate for those who've visited other halls of fame and expect to see rows and rows of leather helmets, rivalry trophies, and game-worn uniforms. Those are all represented throughout, but sparingly -- seeing original play sheets by Lou Holtz and John Heisman will just make non-casual fans wish they could also see more by other coaches.

For all the Hall's technology, the most memorable experience was touring the office of Hall historian Kent Stephens, who's been in charge of the collection since its South Bend opening. His vaults include everything from a scoop of dirt lifted from the site of the first-ever game in 1869 to boxes of blue Boise State turf, created more than a century later. From Michigan Stadium's blueprint ... 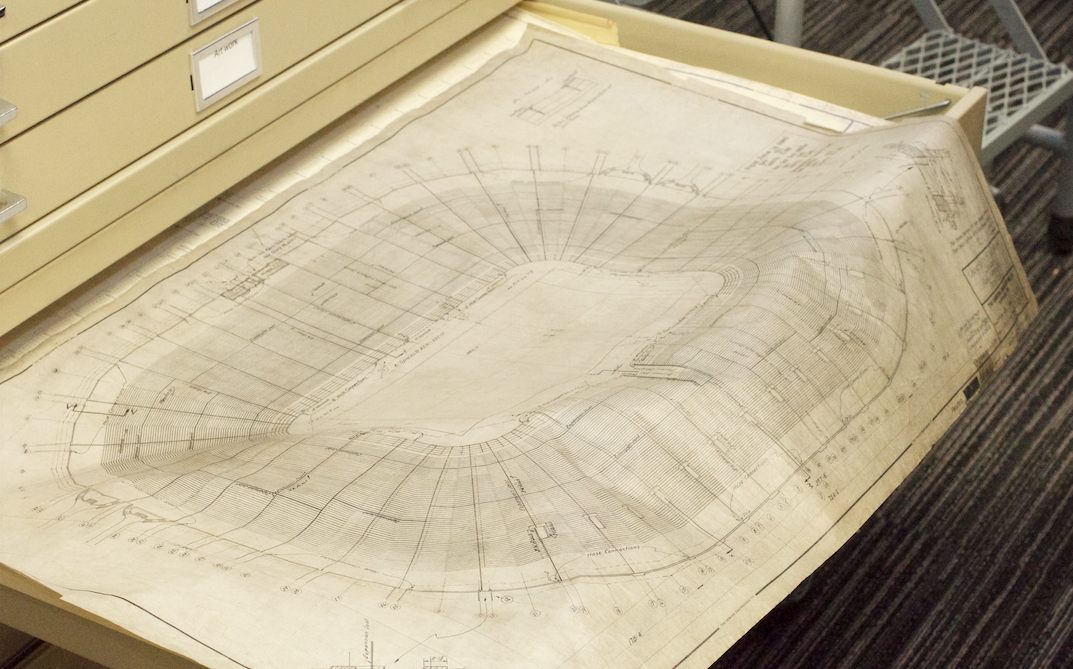 ... to the Stanford trombonist's instrument case, of "the band is on the field" fame.

The actual trombone is on the public floor, behind glass and surrounded by white space and lacking decades-old Grateful Dead stickers. Seeing it from that distance can't ever be as cool as being close enough to touch the case or stacks of game programs from the '40s or boxes of uniforms from the '80s.

And as engaging as a kiosk with recorded messages from Peyton Manning is, it can't top Stephens' Beano Cook-ian historic recall (at one point, he responded to a question about Bobby Dodd by explaining his way through a recap of the 1930 Tennessee-Florida game, then looking up the box score to find he'd gotten the game's rushing stats just about correct) and wall-to-wall archives.

That's not a fair standard to hold a public Hall to. There's no way to allow a stream of guests to handle artifacts at will without also saying goodbye to those artifacts. But if the Hall were to find space for some sort of historical records reading room, which could even be sponsored by Capital One or whoever, then that would become its most time-consuming portion for many hardcore college football fans.

The good news for future visitors: artifacts will rotate on and off the floor annually or so, according to Stephenson, so presumably just about everything will be public at one point or another. And both Stephenson and Stephens mentioned many Hall elements are leaner now than they will be down the road.

Should you visit the College Football Hall of Fame, if you're a college football fan and/or near Atlanta? You should. It's a look at the future of museums, it's probably the single best visual gathering of college football's national history and presence, and you'll get one-of-a-kind digital mementos tied to your school.

But if you're able to win a look at the piles of leather and plastic and mesh and paper in the back room, you've really hit the jackpot.