The Cardinals said hello to the ACC by beating Miami for the second time in as many games, this time with Bobby Petrino back in red.

Share All sharing options for: Miami vs. Louisville final score: 3 things we learned from Cardinals' 31-13 win

The rematch of Louisville's win against Miami in the 2013 Russell Athletic Bowl produced a similar result. Other than U of L now being in the ACC, of course. And Teddy Bridgewater not being here, though his mom was in the building. Oh yeah, and Miami is now starting talented true freshman quarterback Brad Kaaya.

But other than all of that. Louisville has a better team and program than Miami at the moment and is better-positioned for immediate success in the ACC.

Dominique Brown's 143 rushing yards led the way on offense. The Louisville defensive front did more than its share, giving up only one scoring drive of longer than 38 yards and planting itself in Miami's backfield.

It was a full and convincing victory, if less explosive than last year's contest. Considering the toughest of Louisville's next four opponents is probably Virginia, a 5-0 September for Bobby Petrino's second batch of Cardinals looks likely. That's one way to make a first impression. 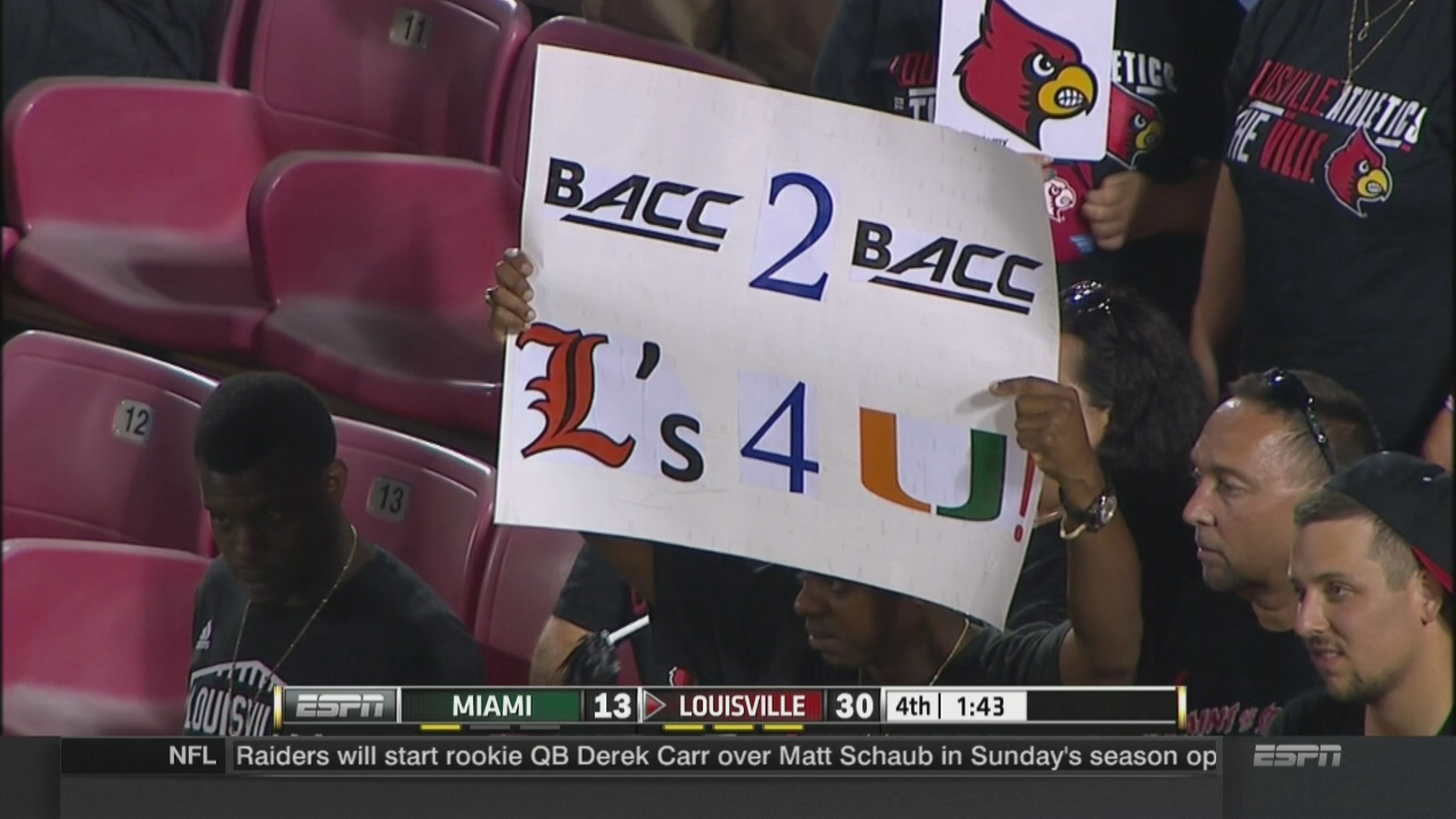 1. Petrino's offense has barely begun. Business picked up in the second half, and other than four sacks of quarterback Will Gardner and a couple turnovers, Louisville's attack was good enough.

But 336 yards and 17 offensive points before garbage time (Corvin Lamb had a 92-yard kick return touchdown that upset Miami Bane, and Gardner threw a score with two minutes to go) on the night means there's still a lot left to do here. Anyone hoping Petrino could have the Cardinals up to his former standards -- despite a new quarterback and an injured DeVante Parker and Michael Dyer -- was surely disappointed, but these things take time. There's little doubt points are on the way, though. That should alarm the ACC.

The U of L coach who does appear to have things operational is Todd Grantham, the defensive coordinator so maligned back in Georgia. Speaking of ...

2. Miami's true freshman quarterback is definitely a true freshman quarterback. The Canes started the game 0-for-9 on third down, extending their streak of third-down failures to 20, going back to last year's bowl. And as soon as they did convert one Monday night, Kaaya immediately threw a pick. With Week 1 in the books, Miami's third-down rate of 8 percent ranks second-to-last out of all the FBS teams that have played.

Of course, that's not all his fault. Kaaya had 174 yards on 29 throws with a few groan-worthy decisions, including a meaningless pick on the game's final play ... and he was the highlight of the Miami offense. Star running back Duke Johnson tantalized with a 24-yard break and a 36-yard catch called back by a flag, but finished with a subpar 90 yards total.

3. The Cardinals might already be the ACC's second best team. After a full weekend, who do you rank behind Florida State, if not Louisville?

Clemson, which lost by 24 points to Georgia? Virginia Tech, whose offense sputtered for a while against FCS William & Mary? North Carolina or Georgia Tech, who played FCS opponents distressingly close for about 30 minutes each? Syracuse, which needed double overtime to beat FCS Villanova?

Louisville now has to be considered near the top of that group and, for the time being, within a slot or two of the Noles. The Cards (and Canes) will get a shot at taking down FSU, and if they or Clemson can't do it, it's hard to imagine the Seminoles not sweeping the conference two years running.

And sure, power rankings talk after Week 1 feels like sorting fog with a rake. But remember, there's a New Year's bowl spot at stake for the conference's top non-Playoff team, so WE GOTTA FIGURE THIS OUT at some point.