Todd Gurley and Mike Davis are the obvious marquee players when Georgia faces South Carolina on Saturday (3:30 p.m. ET, CBS). But the quarterbacks will have the biggest roles in determining the winner.

Share All sharing options for: Let's pretend Georgia vs. South Carolina is a normal football game

Let us suspend reality for a moment and pretend that Georgia-South Carolina games follow some level of predictability and that the better team wins (and goes on to finish ahead of the loser in the division standings).

The Georgia-South Carolina rivalry is one of college football's most unique, and not only because of the extreme unpredictability of recent results. It's one of the rare early-season conference rivalries -- since the Gamecocks joined the SEC in 1992, this game has been only once played after mid-September (2012, when it was played on a still-early October 6).

It pits neighbors against neighbors, both from a border-state perspective and when considering how many Gamecocks are native Georgians (27 members of the current roster, by my count). That means players from one team know some players from the other pretty well.

It features one of the most distinct, perfect-strangers-esque coaching matchups in the country in Steve Spurrier vs. Mark Richt. And it involves a particular strain of Spurrier animosity, supposedly stemming from him losing two of three to the Bulldogs as Florida's starting quarterback in the 1960s (in 1966, his senior season, his No. 7 Gators lost, 27-10). That feeling swung the other way as Spurrier went 11-1 against UGA from 1990-2001, with nine wins coming by double digits and six coming by at least 30 points. His record hasn't been quite as good at South Carolina, which makes sense considering S.C. was a bit of an inferior program when he took over.

However, for us to properly preview the weekend's biggest game, we have to treat it like a semi-normal entity. It takes some work, but we're in this together. We can do it.

Hutson Mason vs. slinging the ball around the yard

Key stat No. 1: Mason averaged 7.3 yards per completion against Clemson

Key stat No. 2: South Carolina has allowed a 72 percent completion rate this year at 10.9 yards per completion

Todd Gurley is Todd Gurley. We know he's going to have an impact on this game, just like he did last year against South Carolina (30 carries, 132 yards, one rushing touchdown, and an eight-yard touchdown catch), and just like he did two weeks ago against Clemson (15 carries, 198 yards, three touchdowns, and a kick return score). He's one of the best players in the country, and when he comes out, he has one of the best sets of backup running backs in college football as well: Keith Marshall, Sony Michel, and Nick Chubb.

Our sites on these teams

Our sites on these teams

Georgia's going to try to run the ball, and the Bulldogs might do it well. Even with Jadeveon Clowney, Kelcy Quarles, and Chaz Sutton up front, South Carolina ranked just 35th in Rushing S&P+ last year, and now those players are gone.

It's in the nature of both Texas A&M and East Carolina to spread you out and create one-on-one situations, and against South Carolina it worked. Of 122 tackles the Gamecocks have made in two games, 109 have been solo tackles (89 percent). But that's not really Georgia's thing. There's a physical aspect that South Carolina has not yet seen in 2014; only 70 percent of Clemson's tackles in the season opener were of the solo variety. Georgia simply outmuscled the Tigers.

Still, when asked to defend the run, South Carolina has done a decent job, holding both A&M and ECU to sub-standard success rates on the ground. Gurley is a different animal, but it would stand to reason that at times, South Carolina will slow down Gurley and the run game. At some point, then, it will be up to quarterback Hutson Mason to make a few plays.

With a great run game and a defense that dominated the second half, offensive coordinator Mike Bobo didn't ask Mason to do much against Clemson. As Richt said this week, "When your defense is playing like that, it's not really wise to sit there and sling it around the yard."

As a result, Mason's stat line was lackluster: 18-for-26, 131 yards, one sack, 4.4 yards per pass attempt (including sacks). He wasn't asked to do a lot, and he didn't do a lot. Speedy senior Chris Conley caught just two passes for 14 yards, and running backs and tight ends were the target of nearly half of Mason's tosses. This was as conservative as it gets.

The last time these teams played, Georgia won because of the passing game. Gurley averaged just 4.4 yards per carry, but Aaron Murray completed 17 of 23 passes at 18.2 yards per completion. He found Justin Scott-Wesley for a game-changing 85-yard score. He found Michael Bennett for a 32-yarder. Keith Marshall had a 48-yard catch-and-run. Hutson Mason averaged seven yards per completion against Clemson, but only six of Murray's 17 completions last year gained seven or fewer yards.

Gurley will have his moments, but the odds are good that Mason will need to get the ball downfield to win. Can he?

Dylan Thompson vs. the same

There were moments against Clemson that suggested Georgia's issues in the defensive backfield -- a major albatross last season and, because of youth, a continued concern -- haven't been alleviated. Clemson's Mike Williams had three catches for 88 yards, Artavis Scott added a 35-yarder, and Charone Peake had a 30-yarder.

Georgia eventually swallowed up the Clemson running game, forced passing downs, and ate quarterbacks Cole Stoudt's and Deshaun Watson's respective lunches. But as we learned last year, South Carolina has quality vertical threats, and this year the threat has been verified. Of the 11 Gamecocks to catch a pass in 2014, nine have caught one for at least 16 yards, and seven have caught one of at least 24.

South Carolina quarterback Dylan Thompson has had some efficiency issues throughout his career. His instincts don't always tell him to take what the defense gives him. He looks for a long time, and he sometimes freezes up if someone's not open downfield.

If someone is open downfield, Thompson is good at getting the ball to him. And against a Georgia secondary that will be starting a freshman at nickelback (Dominick Sanders), a redshirt freshman at free safety (Aaron Davis), and two upperclass cornerbacks (junior Devin Bowman, senior Damian Swann) who have suffered just enough breakdowns to make you worry, he might have some opportunities. It would be surprising if players like Nick Jones and Damiere Byrd didn't have at least a couple of big gains.

But there's a difference between a couple and a lot. If Georgia gives up a couple of big plays but slowly shuts the passing game down, as it did against Clemson, the Dawgs will probably win. Running back Mike Davis looked healthy and effective against ECU last week, and he'll have his moments, but Georgia's front seven is awesome. Like Georgia, South Carolina will need to avoid becoming one-dimensional.

For justifiable reasons, Gurley and Davis are the two headliners. But the two senior (and career backup) quarterbacks will be the most critical players. 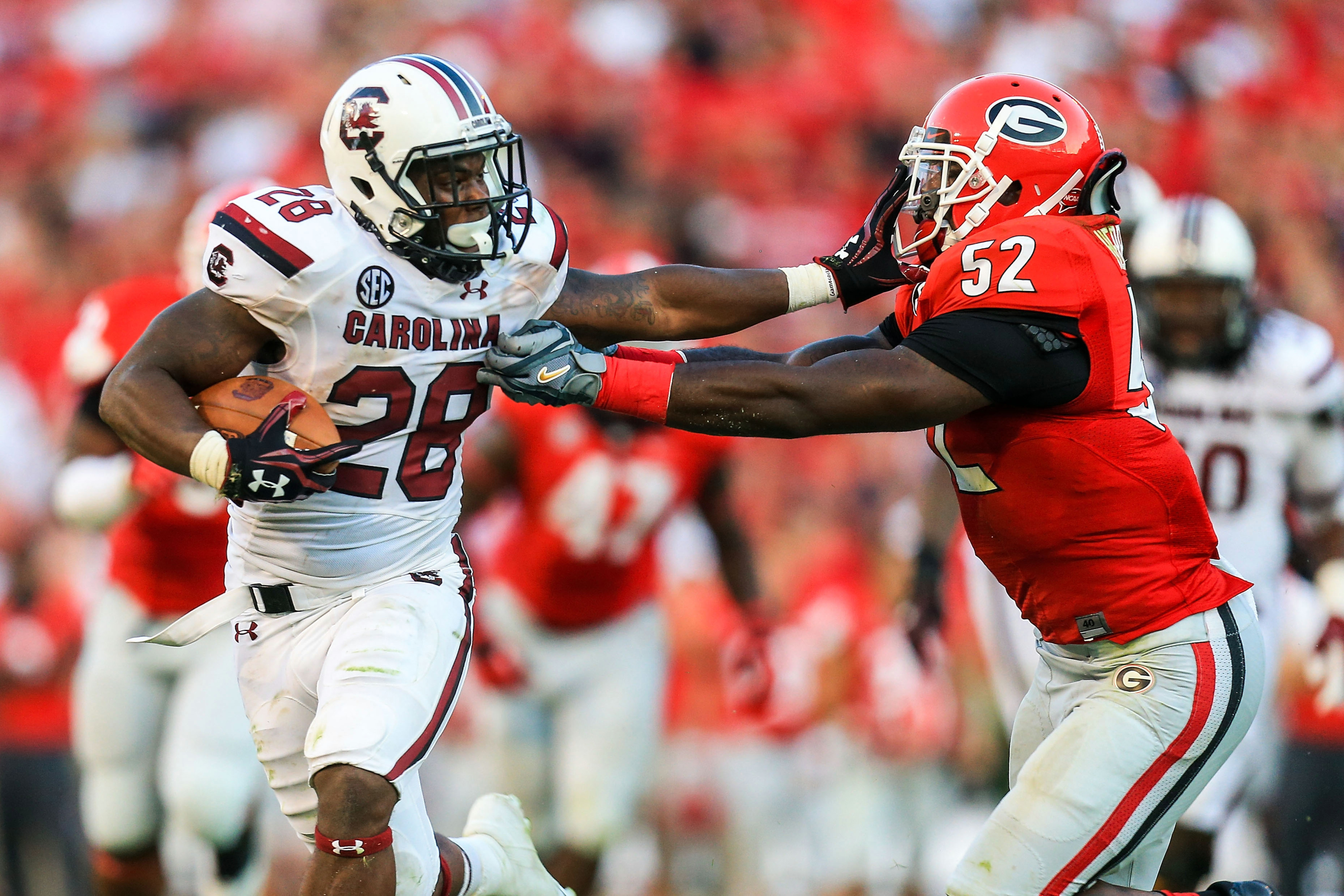 The Gamecocks vs. the chains

A balanced offense is not one that runs and passes equally; it's one that can do each when it needs to.

Despite barely having Davis in the season opener, South Carolina has been fine on the ground. The Gamecocks have established an above average success rate on standard downs and have converted the small number of power rushing and short-yardage opportunities they've been given.

Passing is still an issue, however. I was quite bullish on South Carolina, but I was concerned about two things heading into the opener: a young set of cornerbacks and Thompson on passing downs. Both of those have borne out into true problems. South Carolina's pass defense was sketchy (at best) against both A&M and ECU, and Thompson has struggled on passing downs. On second- and third-and-long, Thompson is taking sacks 8 percent of the time and generating a passing-downs success rate of only 26 percent, 3 percent below the national average. And that was against Texas A&M and East Carolina.

Georgia's defense rained hellfire on Clemson when the Tigers fell behind schedule and will probably do the same in Columbia. With some combination of Davis and the passing game, South Carolina will need to keep the pressure off of Thompson, because it's not clear Thompson's ready to handle Georgia's pressure. With Davis' skill and Georgia's secondary issues, South Carolina should have the advantage on first down, second-and-short or medium, and third-and-short. Keep it in that range.

The Gamecocks' defense vs. havoc

Key stat No. 7: South Carolina has one sack in 107 opponent pass attempts, none on 20 passing downs pass attempts.

Yes, you need to provide some speed bumps for Gurley, and yes, you need to figure out how to weather whatever vertical passing Georgia attempts. Of course.

But for South Carolina, the primary defensive goal is simpler than that: start punching back. Against the spread offenses of A&M and ECU, the Gamecocks reacted, tried (and sometimes failed) to make tackles, and looked to survive. A&M had them on their heels from the opening snap. ECU only scored 23 points, but the Pirates generated scoring opportunities on seven of their first nine possessions.

South Carolina's defensive players have been bystanders, with five tackles for loss, one sack, and minimal on-ball defense. Maybe the Gamecocks are better built to handle power-oriented offenses, but if they want to SEC East favorites they were supposed to be, they'll need to start making disruptive plays.

Based on history, losing this game does not have the impact on the standings that one would assume. Georgia lost to South Carolina and won the East in both 2011 and 2012, while the Gamecocks lost to the Dawgs and finished a game ahead in 2013.

Still, South Carolina has already lost to Texas A&M. A Saturday loss would put them 1.5 games behind the Dawgs in conference play instead of just one. Georgia's likely to win its next two conference games (home affairs against Tennessee and Vanderbilt) and, from a location standpoint, gets more winnable battles against both Florida (Georgia plays the Gators in Jacksonville, while S.C. plays them in Gainesville) and Auburn (the Tigers go to Athens but host the Gamecocks).

The loser of this game always ends up with a "backs against the wall" storyline, but if South Carolina is the losing team, that narrative will ring true.

Georgia played like a Playoff-caliber team in its win over Clemson, while South Carolina has yet to show the top-10 prowess it was supposed to have. In a rational, sensible universe, Georgia has the edge, even in Columbia.

But only so much sense is allowed when Spurrier and Richt face off. Knowing how this game has gone recently, I'm sure that makes the most likely result a five-touchdown Gamecock win. Can't wait to find out how wrong I am.

College football Saturday, Week 3: Georgia-South Carolina and everything else