With a little bit more evidence after two weeks, it's time to slide around the pecking order in each major conference and among the non-power cluster.

As each week passes, more emphasis must be placed on the current season results and less on preconceived notions. No change at the top or the bottom, but separation and movement abounds in the middle tiers, though half of the conference has played only a single FBS opponent.

Virginia Tech pairing competent offense with its trademark defense gives it as good an argument as any for being the No. 2 team in the conference. Notre Dame's dismantling of Michigan gives it an argument, too, while Clemson and Louisville hang around in the group.

Pitt has looked very good against some iffy competition, as has Duke.

Virginia's tough game against UCLA looks less impressive after the Bruins struggled to win at home against Memphis. North Carolina, Georgia Tech, and Miami have been decidedly below average against lesser competition.

Next: It's hard to see BC upsetting USC or Wake winning at Utah State. But NC State at USF, Miami hosting Arkansas State, and Syracuse visiting Central Michigan are all important don't-embarrass-the-conference contests.

The Sooners look every bit like the College Football Playoff contender we expected, albeit one that hasn't been tested yet. Through two games against subpar mid-majors, OU has posted a 100-23 margin. Next up is Tennessee in Norman, which should tell us more about where Bob Stoops' crew is headed, but probably not that much.

It's another September of smashing stuff for Baylor, whose toughest opponent out of the season's first five weeks is either Buffalo, Iowa State, or the bye. Injury issues have already crept into Baylor's offense, so we'll have to see if that derails the good-times-destroy-everything machine as it did last year.

The Longhorns tumble after losing to BYU by an even worse margin than last year, and last year was the game that caused Mack Brown to fire his defensive coordinator. We still tend to believe Charlie Strong has Texas aimed in the right direction. But massive attrition, an early plague of injuries, and a terrifying mid-season schedule mean that belief will be tested.

The Big Ten is demonstrably terrible. The Big Ten had three major non-conference games this past Saturday and promptly lost all of them like so many sets of keys.

The Big Ten has money and a footprint and an alumni base to be reckoned with, and yet the Big Ten is dead-set on becoming a basketball conference.

The three major powers of the Big Ten -- Ohio State, Michigan, and Michigan State -- all lost critical games, while teams like Wisconsin, Iowa, and Nebraska struggled mightily against lesser opponents.

They could have sank. Down nine early in the third quarter against a ferocious Michigan State defense, Oregon could have become the latest high-powered attack dismantled at the hands of Pat Narduzzi and Mark Dantonio. Instead they soared, blistering their way to an absurd 28 points over the final 25 minutes, ending the game with a 46-27 win, and the young season's most impressive performance by any team. There’s little question that the Ducks head the elite tier of the conference, with resurgent USC a cut below.

Below those two teams sits David Shaw’s Stanford squad, which botched a potential victory with some horrendous red-zone play, as nine Cardinal drives inside the USC 30 produced only 10 points. Still, because their loss came against a very strong Trojan team, it’s hard to push them down any further, especially when the other potential contenders for the No. 3 spot still haven’t done quite enough to warrant a move up.

UCLA is 2-0 but hasn’t looked like a team worthy of its lofty poll position thus far, and while Arizona State has steamrolled through Weber State and New Mexico, neither of those teams exactly scream Murderers' Row. The same holds true of 2-0 Utah, which, like the Sun Devils, has also dropped 50 points in consecutive weeks. A better litmus test for the Utes is coming, though -- they’ll face Michigan at the Big House after a bye.

Despite being favored against both Nevada and Rutgers, Washington State managed to win neither. It tumbles into the cellar of these power rankings as result; even lowly Colorado has emerged victorious in the season’s first two weeks. The good news is that the Cougars shouldn’t be winless for too much longer, as they host FCS Portland State next.

You did not make it easy to power rank you this week, SEC.

Alabama, Auburn, Texas A&M, LSU, Florida, and Arkansas beat Florida Atlantic, San Jose State, Lamar, Sam Houston State, Eastern Michigan, and Nicholls State by a combined margin of 367-23. Just so we’re absolutely clear, that’s a real statistic, not something I made up for rhetorical impact. The best team of that sorry bunch is probably San Jose State, which entered the week ranked No. 74 in F/+. Sadly, Ole Miss’ thrashing over conference opponent Vanderbilt doesn’t look like it qualifies as a much more impressive win.

It’s hard to learn anything about teams playing such overmatched competition. It’s even harder to compare one 60-point blowout to another and draw meaningful conclusions about which team did a better job of humiliating former two-star prospects.

Florida’s beating of Eastern Michigan might be the exception. The Gators threw for 396 yards against the Eagles, displaying a degree of passing prowess unseen since some time around the 2010 Sugar Bowl. (Yes, EMU is one of the worst teams in the FBS. But please let them have this.)

The BYU Cougars continue to make their case for not being an "Underdog." And QB Taysom Hill is making it hard to not consider him an early candidate for the Heisman, with eight touchdowns in two games. Sure, Texas isn’t what it once was. But the Cougars didn’t just beat Bevo; they took him to the slaughterhouse.

Don’t sleep on Navy out of this group. The Midshipmen’s triple option is as dangerous as ever with Keenan Reynolds and Ryan Williams-Jenkins carrying the rock.

And let’s talk about CMU for a second. The Chippewas may have beat up on a bad Purdue team, but they are 2-0 with one of the deepest batch of returning starters in the FBS. Don’t be shocked to see them hang out on these rankings for a while.

Two familiar Underdog powers, Boise State and NIU, have climbed their way up these power rankings. Boise State rebounded from that awful season-opener in the Georgia Dome with a solid win against CSU. The Broncos may not be world-beaters anymore, but they’re likely still among the best the Underdogs have to offer. Then you’ve got NIU, a team whose hopes rested on replacing Jordan Lynch. Guess what? They may have found him in Drew Hare, the third-string QB heading into Northwestern who threw for three second-half touchdowns. NIU has now won 16 consecutive in opponents' stadiums, with another B1G win on its resume. 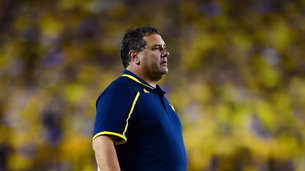 This week in schadenfreude 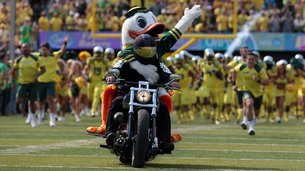 Spencer Hall and The Duck 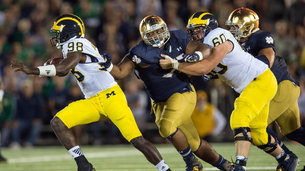