How each conference (and one big group of conferences) stacks up after three weeks of college football.

I was hoping for some separation over the weekend, but instead, teams that had been looking good were upset (hey, Louisville and Virginia Tech), and Clemson's loss to Georgia now looks worse. No change at the top or the bottom, once again. Did you know that Wake Forest is last in the country in yards per play against FBS competition, with 2.65?

The key in separating the middle is figuring out if the win is worse than the loss. For Louisville, I think blowing out Miami is worth more than losing very close at a Virginia team that also played UCLA tough. For Virginia Tech, the same goes: Ohio State win worth more than East Carolina loss, though this is not as clear. And Pitt solidly outplayed Boston College on the road.

Those in the lower group either have a convincing loss, or nothing to speak of in the win column at the moment.

Next: This week should provide some separation, as seven schools are playing games in which the spread is a touchdown or less.

A tip of the cap to Iowa State for getting their first win of the season, against their in-state rival from in Iowa, as the Hawkeyes were a probable reprieve for Paul Rhoads' boys after facing the THREE-TIME THREE-TIME THREE-TIME defending FCS champion North Dakota State Bison and No. 20 Kansas State. Who knew a Big Ten team could provide confidence for an 0-2 squad?

Interesting is also happening in Austin, as the Texas Longhorns lost to UCLA in a valiant effort. Charlie Strong's squad is going to get worse before it gets better, but they might have found their quarterback for the rest of the season in Tyrone Swoopes. And with Kansas up next, the schedule provides an opportunity for Strong's young players to build up some confidence.

However, the name on the Big 12 marquee for Week 4 shifts from Oklahoma to Kansas State, as primetime television awaits Bill Snyder's boys from the Little Apple. Oklahoma held serve with a decisive, 34-10 win over Tennessee, but lost leading rusher Keith Ford with an ankle injury. Now, Kansas State gets the chance to remind the world that it plays really good football while taking on the daunting task of trying to shut down Auburn's insane offense. Snyder's teams always play big in big games.

Oh, and shout-out to the fans of West Virginia, who per a study, are the biggest bunch of goons who get kicked out of football games the most in THE TWELVE. Peace and love.

When can you guarantee a win for the Big Ten? When two Big Ten teams are playing one another. Otherwise, bet on literally anything besides the Big Ten. Like, if the Big Ten is playing scurvy, take scurvy.

Michigan briefly struggled against a Miami (Ohio) team that hasn't won since 2012, Minnesota and Illinois were rocked by power-conference opponents, Iowa Iowa'd (it involved Kirk Ferentz, clock management, and a field goal), Indiana completely gave up on playing defense against Bowling Green, and Purdue ... well, they're Purdue. When does basketball season start again?

What a wild, wild west it is shaping up to be. Just seven days after USC seemed poised to challenge Oregon atop the Pac-12, the Trojans took a major tumble, falling in a 37-31 upset to Boston College. For that road loss, Steve Sarkisian’s crew drop to third in the pecking order, edging Stanford only by virtue of defeating them head to head in Palo Alto.

Arizona State becomes the prime beneficiary of that loss, moving up all the way to second, the third team to hold that position this year. (Such turnover increasingly indicates that the Pac-12 draws the line with Oregon, and then everybody else far below.) Like both teams who held down the No. 2 spot before, Arizona State may soon shuffle out of this position as well, due to the gauntlet of games that await – the Sun Devils host UCLA and Stanford, plus take a trip to the vaunted L.A. Coliseum -- and Taylor Kelly’s health is a huge question mark at this point.

Though UCLA has improved to 3-0, it is truly difficult to be impressed with their play so far, which has been largely inconsistent. The Bruins could redeem some much-needed goodwill with a victory over ASU next, as the Sun Devils should prove to be their stiffest competition to date. That currently looks like a tall order, though, especially if Brett Hundley cannot return from the elbow injury he suffered against Texas.

After two concerning performances against Hawaii and FCS Eastern Washington, the Huskies look to have righted the ship at least a tad, steamrolling previously undefeated Illinois in convincing fashion. While Washington and California have each beaten a power-conference opponent, the Huskies take the tiebreaker because Cal’s power win, Northwestern, looks less impressive by the week. Washington State still hangs in the cellar for now, even after picking up its first win against FCS Portland State. Colorado looked feisty and competitive for a good stretch against a heavily favored Arizona State team, and avoids last place for now on the strength of that performance.

For the second time in three weeks, South Carolina has turned our understanding of this conference completely upside-down. The Gamecocks showed across-the-board improvement for a third consecutive week in their narrow but impressive win over then-No. 6 Georgia. The SEC East is now up for grabs.

Arkansas is a flawed team, but the Razorbacks reminded us in a 49-28 win at Texas Tech that they do two things really, really well: 1) run the football with Alex Collins and 2) run the football with Jonathan Williams. Brandon Allen is going to have eventually get some kind of a passing game going if Arkansas is going to win some games in the SEC West, but that rushing attack is explosive enough to cover up a lot of warts.

Right now there’s very little distance between spots nine through 13, as evidenced by Florida’s close win against Kentucky in triple-overtime. There’s quite a bit a distance, though, between spots 13 and 14. Despite pulling out a 34-31 against UMass, the Commodores are looking like they might be the worst SEC team – and I do not say this lightly -- since the 2011 Kentucky Wildcats.

It’s still early, but we are already starting to get a sense of which teams will dominate the top half of these rankings all season long. I’ve gushed enough about BYU. It’s time to show some love to the other Underdogs. Let’s start with Gunner Kiel and Cincinnati. Former Notre Damer Kiel did his best Touchdown Jesus impersonation Friday night in his collegiate debut, showing once and for all that he is what we all thought he was coming out of high school. The Bearcat quarterback torched a good Toledo team to the tune of six touchdowns. Hey Les Miles, is Gunner’s chest big enough for ya now?

Speaking of quarterbacks: ECU’s Shane Carden and Marshall’s Rakeem Cato are two of the best in college football today, and both have their teams right in the mix of the race for a New Year’s Day bowl. Marshall can't afford any slip-ups with its cake schedule, but with Cato guiding the ship, even the roughest of seas should be manageable. Carden and ECU have already knocked off one ranked team, Virginia Tech, and hung tough with another, South Carolina. The Pirates play for keeps, ladies and gentlemen.

Then there’s NIU. The Huskies don't lose at home (27 straight) or on the road (17 straight), and apparently they don't lose any momentum when a Heisman candidate quarterback graduates, either. Drew Hare has firmly asserted himself as the face of this team moving forward. Hare is the reason NIU beat Northwestern in Week 2, and with the Huskies 324-yards-per-game rushing attack, all he needs to do is provide some sort of threat through the air to keep NIU's dominant winning streaks alive this fall. 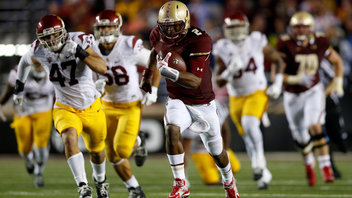 How BC embarrassed USC 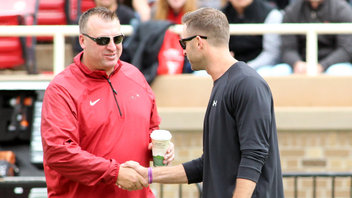 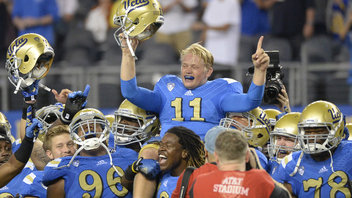