The Aggies came in and smashed South Carolina's title hopes, 52-28, with a 511-yard day by their first-time starting quarterback. How'd he do that?

Share All sharing options for: How the Texas A&M offensive machine works with Kenny Hill in charge

The plan from South Carolina was evidently to mix up looks and attempt to confuse young Kenny Hill, playing his first game as a starter in a loud, hostile, SEC building. Texas A&M's plan was to go fast, throw screens to their athletes, and develop rhythm.

As their plans unfolded, the A&M offense revealed itself to be a well-oiled machine. Despite playing multiple underclassmen, the Aggies were already capable of executing their game plan with precision. They played with rhythm and confidence, routinely turning base concepts into big gains by virtue of athleticism and effective blocking.

The Gamecock defense revealed itself to be a lost mess. It couldn't match both A&M's pace and execution, and it was clear that their players weren't used to thinking on the field at that rate of play. The result was defenders playing with bad leverage, assignment busts in the secondary, and bad open field tackling. Cardinal sins when playing against a spread offense.

In hindsight, maybe we shouldn't have been shocked by rookie quarterback Kenny Hill's performance against South Carolina.

And when Kevin Sumlin and offensive coordinator Jake Spavital felt ready to dial up a more complicated passing concept? Hill was already in rhythm and ready to go, while the Gamecocks were discombobulated and rarely able to force him to his second read in a progression.

Eventually South Carolina determined to cool down their approach and rely on a "solo" quarters defense with their safeties dropped deep, deep off the ball. This failed, as South Carolina was unable out-execute A&M playing simplified tactics. Hill was already in gear.

In the SEC, the Gamecocks are considered ahead of the curve for utilizing a 4-2-5 defensive alignment, but that's a defensive response that's about a decade behind in attempting to deal with modern spread tactics. Defenses that can't get lined up and play sound fundamentals every snap stand no chance to out-execute this system.

South Carolina did not prove to be a worthy foe, but what did we learn about Kenny Hill, heir to Johnny's throne and breaker of Manziel's school single-game passing yardage record? A what have we learned about A&M football?

Hill was really aided by the overall talent and cohesion of the offense. Texas A&M opened the game with a pair of simple running back arc screens that shredded the Gamecocks.

The wide receiver blocking on these plays? Fantastic. The play on the blocks in space by the Gamecock defenders? Not great.

The blocking? Strong.  The recognition and pursuit by the defensive line? Inadequate. The effort and speed of the ball carriers in space? Devastating. The open field tackling by the defense? Defeated by poor leverage.

Hill was walking into a situation in College Station with an established system awaiting his command. A&M has great athletes in a scheme that makes it easy to create opportunities for them, as well as an experienced line that seems to reload with NFL talent every season.

While people love to say of various teams that "they don't rebuild, they re-load," it's rarely true. Effective offense is largely about a mastery of skills and techniques and generally that requires time and training. The teams that "reload" can only do so if they have a steady pipeline of developed upperclassmen at key positions to step in every season.

A&M is in a different situation.

The great benefit of the Sumlin brand of the air raid, which originated in Houston and draws influence from Mike Leach, Mark Mangino, and others, is that the practice schedule is designed to foster quick development. They run up-tempo practices geared around getting as many reps as possible, while the air raid practice schedule is all about quick install of a simple offense and then hammering home details from that point on.

Consequently, A&M was ready to run its offense from Week 1, whereas South Carolina had clearly not mastered its own defense. 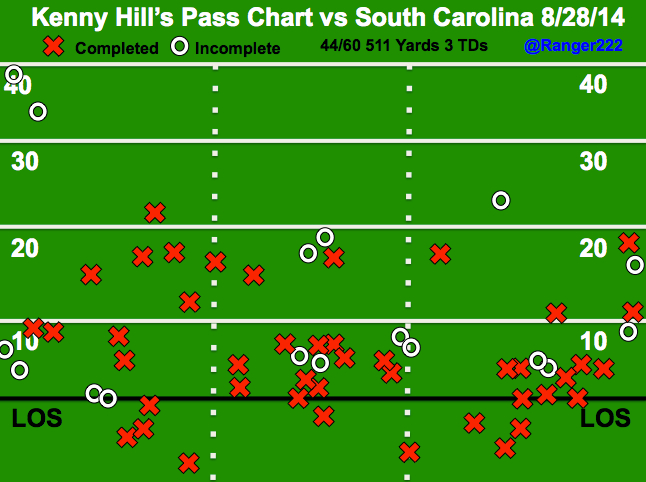 Bill Connelly on Hill: As a redshirt freshman Heisman winner, former Texas A&M quarterback Johnny Manziel averaged 7.8 yards per pass attempt, including sacks. In his first game succeeding Manziel, on the road against a top-10 team, sophomore Kenny Hill averaged 8.2 yards per attempt. And he did so over 61 attempts -- 60 passes and one sack. He completed 44 of 60 (73 percent) for 511 yards (11.6 per completion), three touchdowns, no picks, and one sack. On the road. Against a top-10 team. We probably shouldn't hand him the Heisman just yet, but that's as good a start as anyone could hope for, even if it turns out that South Carolina's defense isn't as good as we thought.

Kenny Hill and A&M's Texas base

Consider also the background of Kenny Hill and the other players on the Aggie roster. Sumlin is plucking the best players out of a state that is known for its high school football, but some of the details of Texas football may be unfamiliar to some readers.

It's one thing to say "Texans take their high school football very seriously" and another to consider what that actually looks like. It means summer 7-on-7 tournaments that generate reps and practice for receivers and quarterbacks, expensive football facilities, top-paid coaches, a "football period" during the classroom schedule, and no shortage of private tutors and strength coaches.

Texas communities put a premium on producing excellent football teams, and as a result, players from many Texas high schools are far more coached up than the average kid from another state.

Additionally there's the influence of the spread offense, which took hold in Texas high schools like the "World War Z" virus, and many coaches draw from Art Briles and Sumlin for influence and direction. Most of A&M's players had already been running some of Sumlin's concepts at a reasonably high level before they came to College Station. Perhaps the only position in A&M's offense that still requires time is along the offensive line, where a few years of college strength-and-conditioning and technical training is still needed.

Hill's background was playing quarterback for Texas power Southlake Carroll as a sophomore, junior, and senior, with a state title as a junior. You may know Southlake Carroll as the program that produced Chase Daniel and Greg McElroy. With those three years under his belt, Hill was no stranger to A&M's spread concepts or up-tempo pace. He got one year to back up Johnny, then he was ready to take over.

You could see this in Hill's incredible command against South Carolina. For the most part, he was able to throw the ball to his first read and then briskly trot downfield while his receivers torched Gamecock defenders, but he definitely revealed some talent and upperclassman-like comfort.

You can see this in particular on three plays:

A&M is running verticals with route adjustments available to the wide receivers, but the Gamecocks have dropped eight defenders into coverage. Hill recognizes this quickly and makes the check down to running back Tra Carson while Carson still has space and time to make something happen after the catch, which he does.

Manziel struggled to show similar wisdom in this system, but it's a key step to unleashing the kinds of athletes on this team and allowing them to make plays. Timely check downs are often the mark of the more experienced signal caller.

Next observe how he handles pressure on the goal line:

South Carolina brings a fire zone blitz, but Hill responds calmly. He reads the middle underneath defender and uses his eyes to freeze the deep safety, then turns and fires a well-thrown post into the end zone, where his receiver has the cornerback beat. The level of confidence, trust, and mechanical precision to keep that safety frozen in place before slinging that ball suggests a fairly advanced stage of development.

Finally, check out this scramble when nothing is available:

In the latter two instances, Hill benefits from excellent blitz pickup from his offensive line, but he also demonstrates the ability to stay calm and freeze a defender before throwing downfield and the ability to scramble and make yardage out of nothing. Neither of those abilities come naturally to most people.

Hill may not have any one elite trait, but he has the perfect skill set for this offense and a strong mastery of its reads and plays.

Week 1 is in the books

Who is Kenny Hill? He's a very good quarterback who's been groomed for years, like his teammates, first by Texas high schools and then by the A&M coaching staff to unleash football hell on the old ball coaches in the SEC. They'd better learn to adapt or their breed might just die out.