Florida State, Oklahoma, Michigan State, Oregon, Alabama, and BYU remain tops in each group, with lots of shuffling throughout.

No change at the top or the bottom, once again. Wake Forest is now the only power-conference team to average fewer than 4.5 yards per play against FBS competition, with 3.53. Clemson, with one of the best defenses in the country, couldn't topple Florida State even when the Seminoles were without Jameis Winston. Will anyone from this league beat FSU now that Winston is back?

Falling: Virginia Tech losing at home to a lackluster Georgia Tech team and failing to bounce back from the East Carolina loss, is a huge red flag. Miami's defense gave up 343 rushing yards to Nebraska, and its early season defensive success may have been a red flag. North Carolina allowed 789 yards against East Carolina.

Duke has not yet played anyone of quality, but has destroyed its competition thoroughly.

Teams in the upper middle tier all have impressive performances and/or losses that are respectable. The lower tier teams have losses that far outweigh their wins, or haven't played anyone and have not looked that great in doing so.

We know that Oklahoma and Baylor are the two most likely teams to represent the Big 12 in the scheme that is college football's final four. In Keith Ford, Alex Ross, and Samaje PE-RINE, OU might have the best collection of running backs since the Arkansas Razorbacks trotted out Darren McFadden, Felix Jones, and Peyton Hillis.

As far as Baylor's concerned, the Bears have played a trio of opponents that might as well be DeVry, ICDC College, and Everest College. Baylor will get a slight upgrade in competition in Iowa State on Saturday, but we won't see them tested until mid-October at the earliest.

Here's the thing about the Big 12. Usually, there are one or two teams that are picked to be the elite, one or two teams that probably should be relegated to Conference USA *COUGH* Kansas! *COUGH* and everyone in the middle, who are just good enough to upset anyone in America but still can't quite figure out how to get out of their own way at times.

The Big Ten had its best weekend yet, going 12-1 against non-conference opponents (including a big win for Nebraska over a Miami squad that racked up five personal fouls in the second half.)

The lone loss: Michigan, who lost to Utah at home in a waterlogged corpse of a game. Just an FYI, wealthy Michigan fans: Brady Hoke's buyout is $3 million. Jim Harbaugh, call your agent.

It was a light week for the top half of the conference, as Arizona State, USC, Stanford, and UCLA had byes. Oregon played an uncharacteristically tight game against Washington State, but their 38-31 win keeps them atop the conference for now, since no one in the tier below them did anything to jump up.

Teams 7 through 12 are all roughly in the same tier at this point, but should start to separate themselves a bit more over the next week or two. Case in point: one last-second Hail Mary was the difference between seventh-place Arizona and 11th-place California this week.

Along with UCLA, Washington has to be the other oddity in the Pac-12, looking alternatively dominant and eminently beatable, sometimes in the same game. Take Saturday, for example, when the Huskies trailed Georgia State (!) at halftime, only to come out and score 45 unanswered. They’ll host Stanford next, and they’ll have to play a full four quarters if they want to knock off the No. 16 Cardinal.

This week gave us our first top-to-bottom shakeup in the SEC. (OK, perhaps not truly top-to-bottom because, you know, Alabama and Vandy.) With Mississippi State and Arkansas surging in the West and Missouri losing a head-scratcher at home to Indiana, all seven SEC West teams are ranked ahead of the third-best team from the East.

After five years of falling just short against the big three in the SEC West -- which has since grown to four, since A&M's joined -- Dan Mullen and MSU finally got over the hump against LSU. But the Tigers have now looked shaky in both of their outings against power-conference teams (including Wisconsin), so more data points are needed before ranking MSU more aggressively, especially given the Bulldogs’ affinity for late-season unravelings.

Arkansas hung with Auburn (which won ugly at Kansas State in Week 4) for two quarters in Week 1, blew out an FCS team, and has now demolished Texas Tech and Northern Illinois, a pair of approximately average FBS squads. We won’t know for sure until they get it done for four quarters against a conference foe -- they’ll have a chance on Saturday vs. No. 6 Texas A&M -- but it sure does seem like Bret Bielema has shaped the Razorbacks into at least a top 25-ish team in his second year.

ECU has been shooting up the polls in recent weeks, and having hung 70 on North Carolina on Saturday (one week removed from knocking off a ranked Virginia Tech squad), it's hard to fault anyone for giving the Pirates top billing. Shane Carden has looked downright masterful in his picking apart of power-conference defenses. Here's a stat for ya: Carden scored six times on UNC's defense. That's as many touchdowns as UNC starting quarterback Marquise Williams has scored all of this season.

Elsewhere, NIU and Navy both fell just one spot after losing, though one loss (Navy's, by one score to Rutgers) was far more respectable than the other (NIU's, by many scores to Arkansas). Cincinnati looked exposed against a Miami (Ohio) team that hasn't won any of its past 20 contests, proving we may still need to see more of the Bearcats to get a true sense of how good they are. 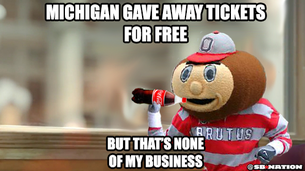 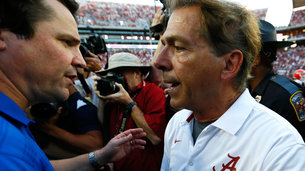 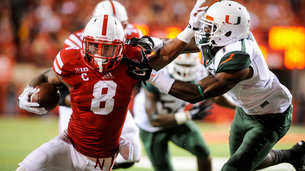