It's important not to overreact to the limited sample set that is Week 1, but Florida State at the top and Wake Forest at the bottom are fairly easy choices. The Seminoles closed out Oklahoma State despite sloppiness in Arlington, while Wake Forest has one of the worst offensive lines you will see in Division I, gaining fewer than two yards-per-play against ULM.

Louisville shares the No. 2 slot for dismantling a likely bowl team, Miami. Virginia moves up into the rest of the Coastal by being the only team in the division to have a good showing against a quality opponent, even in a loss. Boston College also lands at No. 5 by spanking UMass, which is a better opponent than most faced in Week 1.

Syracuse and NC State weren't very good in 2013 and came very close to losing to a current FCS school and a transitioning one, respectively, which drops them both down a hair.

While the top dogs did what quality teams are supposed to do, the teams that put on for THE TWELVE were the two that took tough losses to the college football elite.

Oklahoma State's loss to the defending national champions was one part admirable and one part head-shaking. While many praised FSU's reloading for a chance to repeat, the Pokes had to replace seven starters on each side of the ball and maybe, just maybe, came out better on the other end. RB Tyreek Hill was the best athlete on the field, and DE Emmanuel Ogbah looked like a wrecking ball coming off the edge for OSU's defensive line. Ultimately, Mike Gundy's handcuffing of QB J.W. Walsh (justified or not) made FSU insurmountable, but man, that upset was right there for the taking.

As for West Virginia, their battle versus Alabama can only be described by the text message the homie Mac sent me: "The Exposing." Maybe Alabama's not as good as we once thought. But it took a team like the 'Eers willing to go into YOLOmode and Dana Holgerson to let his offense go full tilt. West Virginia's receiving corps continues to produce electrifying talent, and Kevin White looks to be next in line, as the Tide's DB's had no answer for No. 11. QB Clint Trickett was slanging the pill around the yard, and WVU never looked rattled underneath the bright lights and the pressure.

What does all of this mean? It means that THE TWELVE just might be one helluva ride in 2014.

In the Big Ten, there's Michigan State, and then there's everyone else. The conference finished 12-2 in its first week back in action, with the Spartans leading the charge with a big and completely to-be-expected win over Jacksonville State.

Michigan exorcised some demons against Appalachian State, Penn State got over jet lag to beat UCF, Ohio State finally shook off a wily Navy squad in Baltimore, and Rutgers (!) got a big win on the road (!!) against Washington State.

The two losses? Wisconsin let a 21-point lead slip against LSU, a wild game that featured Wisconsin running on all cylinders with running back Melvin Gordon, but gaining only 65 yards on the ground in the 4th quarter without him. The other loss: Northwestern, losing to a Cal squad that went 1-11 in 2013. Pat Fitzgerald is going to have a very long autumn.

While all three teams at the top took care of business, a shakeup awaits. Stanford hosts USC, and Michigan State travels to Autzen. The results of both games will firm the pecking order.

Elsewhere, UCLA, long thought to be Pac-12 South favorites, needed the help of three defensive touchdowns in order to get by feisty Virginia.

Washington struggled on the road at Hawaii in Chris Petersen’s debut, but receives the benefit of the doubt. A pair of returns – first, to the friendlier confines of Husky Stadium, and the one by QB Cyler Miles, who was suspended for the opener – should tell quite a bit more.

Cal's first FBS win in over a year earns them the right to escape the cellar for now.

Is ranking Auburn No. 1 an overreaction to Alabama looking pretty beatable against West Virginia? Almost certainly. But until we get a bigger sample size on the Tide, it’s hard to be anything but concerned that WVU was able to hang 365 yards. What’s going to happen when Kevin Sumlin comes to town?

Speaking of the Aggies, if the Gamecocks are still as good as we thought they might be (they probably aren’t) and A&M is that much better, then there’s an argument to be made that they should be higher. If we look at Week 1 in a vacuum, then A&M is the clear No. 1.

Georgia and Auburn looked strong, but the Bulldogs’ victory came in a more complete performance against a better team. Depending on your approach, that might be reason enough to put UGA ahead of Auburn. But Auburn’s previous game was a narrow loss to one of the best championship teams in recent memory, while Georgia’s was a loss to Nebraska in the Outback Bowl.

The offensively stacked Cougars must stop committing penalties at a record pace. But QB Taysom Hill looked fantastic in Week 1 with five total touchdowns against UConn.

Frankly, I feel Marshall is overrated. Sure, QB Rakeem Cato is legit, but the Herd struggled against a Miami (Ohio) team that hasn't won in over a year. Winning is winning, and it will be hard to keep the Herd down thanks to their red velvet schedule.

UCF will contend. Had the Knights started QB Justin Holman vs. Penn State, they would have been taking Guinness showers in Ireland. With games against Missouri and three top G5 teams left, UCF has opportunities.

And watch out for Toledo, who has a former ESS EEE SEE quarterback, one of the deepest teams in the FBS, and Mizzou at home in Week 2. 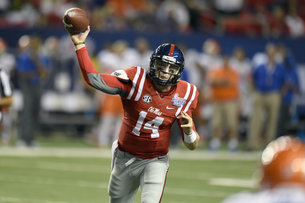 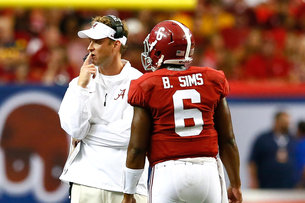 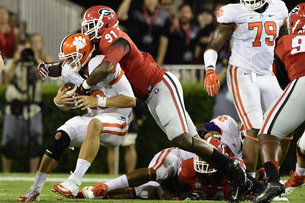