How the Michigan State-Oregon series has already changed college football

While the 2014-2015 series between the Ducks and Spartans has already altered one season, one incredible play in 1999 stands as a nearly impossible moment to top.

Share All sharing options for: How the Michigan State-Oregon series has already changed college football

Sixteen years ago, back when Nick Saban was just another struggling football coach in danger of losing his job, his Michigan State Spartans dropped their season opener, at home, to Colorado State.

This seems shocking in retrospect, but it was not entirely unforeseen at the time. Colorado State had become a solid program under a future steakhouse proprietor named Sonny Lubick, and the Spartans were mired in a post-George Perles slump under the leadership of a draconian man whose primary success as a head coach had come in one year at Toledo.

In Saban's first four years at Michigan State, he'd barely broken even. By the time Michigan State traveled to Oregon on the second weekend of the 1998 season, his record with the Spartans was a wholly un-Process-like 19-17-1.

And then it got worse: Oregon throttled the Spartans, putting up 48 consecutive points behind quarterback Akili Smith and coasting to a 48-14 victory.

The whole Saban tenure appeared on the verge of collapse.

And if the mere shock of the result weren't bad enough, the Spartans' captain, defensive back Amp Campbell, lowered his head during the first quarter to tackle an Oregon fullback named Chris Young -- back when Oregon still had a need to employ fullbacks -- and ran directly into Young's thigh, fracturing two vertebrae. Campbell's career at Michigan State was almost certainly over, and shortly after that game, he gave a press conference essentially confirming as much.

Saban's coaching future was hanging by a thread after the Spartans finished off another 6-6 season. If not for a massive upset of Ohio State later that year, he might never have made it to 1999.

(How bad was it? Saban actually made a halfhearted joke about the bright side: millions of people in China hadn't seen his team play.) 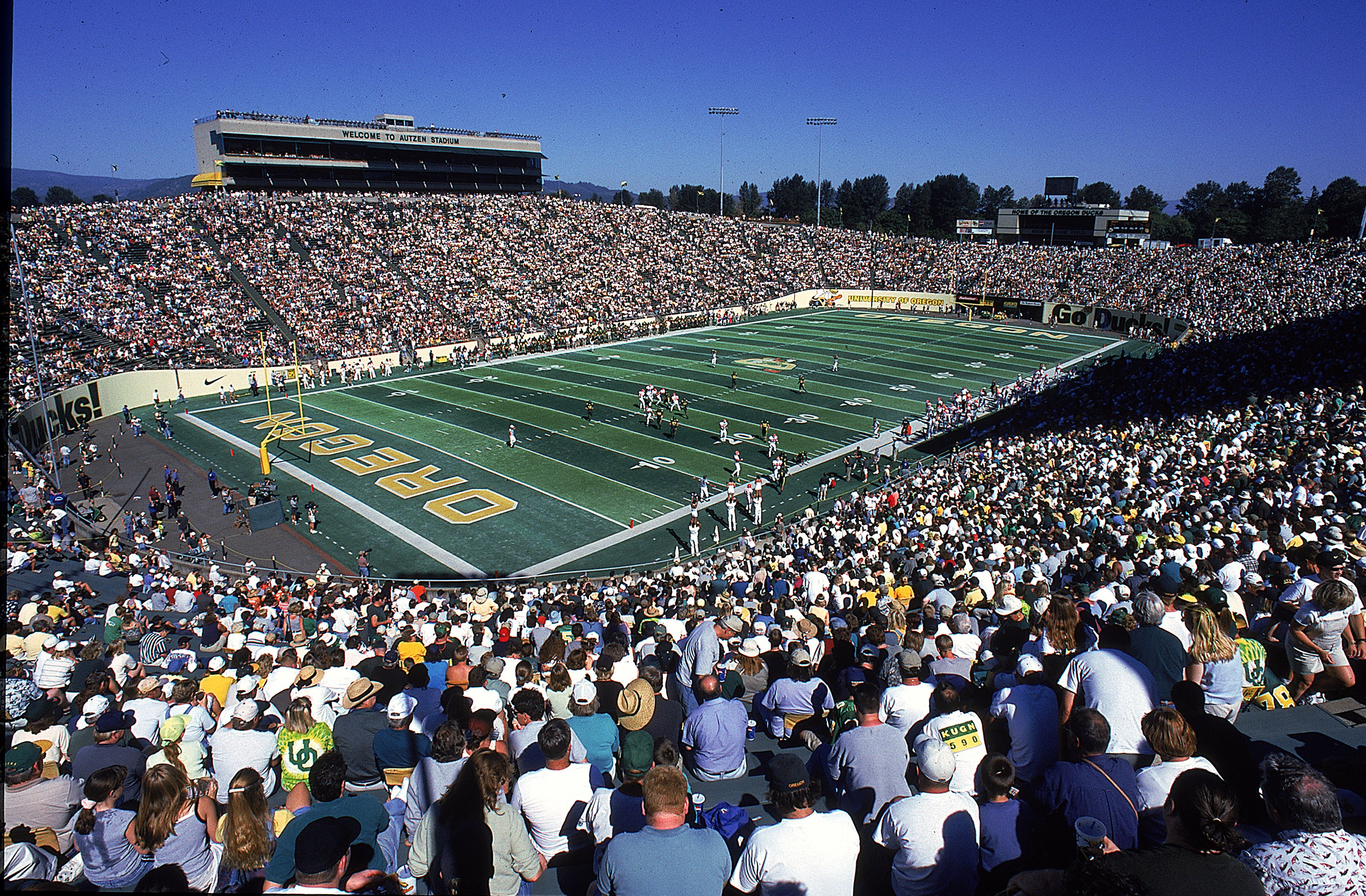 On Sept. 6, 2014, Michigan State and Oregon face each other for the first time since they played a home-and-home series back in 1998 and 1999. So much is different that it's easy to forget things ever were the way they were.

In 1998, Oregon still wore yellow helmets, and the notion of Oregon changing helmets was controversial enough that when Brent Musburger asked Nike's Phil Knight during a broadcast booth interview about the green-helmet rumor he'd heard, Knight demurred, saying, "We don't sell helmets. You got some misinformation, Brent."

But at that moment, as Michigan State limped into its 1999 Thursday night season opener against Oregon, one of the eventual greatest coaches in football history faced a watershed. And on the other side, the soon-to-be flashiest program in football stood at its own watershed, on the verge of stamping its identity both onto the national consciousness and onto its own headgear.

Two things you might note immediately from the video of 1999 Oregon-Michigan State: 1.) the Ducks are wearing green helmets, adorned with that Funyuns-style O that would become the stamp of a program destined to slip deeper and deeper under the sartorial influence of Knight's corporation, and 2.) Amp Campbell is back on the football field.

Shortly after essentially announcing his retirement from football, Campbell decided to give a go at rehab, and when he walked out onto the field that night, he was greeted with both deafening applause and an extended sideline soliloquy from commentator Dr. Jerry Punch.

"It's a huge moment in my life," says Campbell, now the defensive backs coach at Saban's alma mater, Kent State. "Somebody sent me the YouTube clip the other day, and seeing the actual footage of me laying on that turf back in '98, it brought chills to my body. I ended up coming back to East Lansing to finish up my degree, and being in that brace, and trying to go to class, and not being able to sit in that desk in the classroom."

But eventually, Campbell decided to try a comeback. He petitioned the NCAA for a sixth year of eligibility. He flew to New York to see a specialist and eventually was cleared to play, with the rather large caveats that A.) coming back might lead to more surgeries down the road, and B.) coming back could, in the worst case scenario, lead to paralysis.

"The game of football was something I'd been playing since I was six years old," says Campbell, who hasn't required any other surgeries since the initial one, and insists his neck pain is relatively minimal these days. "I just promised myself I wouldn't make that mistake again, lowering my head to make a tackle."

For its part, Oregon was not fully Oregon yet. At that moment, Chip Kelly was just beginning his first season as the offensive coordinator at New Hampshire. The helmets were still a novelty, and the full range of Ken Doll uniform options had not been laid out. The Ducks' coach was Mike Bellotti, who had succeeded Rich Brooks, who had provided the first signs of life for a program long mired in a swirling era of awfulness.

I wouldn't make that mistake again, lowering my head to make a tackle. - Amp Campbell

But even then, the nascent Oregonness was not lost on Saban. In the days before the '99 game, he said, "Of all the teams we played last year, their tempo and their enthusiasm and their aggressiveness was as fast-paced as anybody we played. Quite frankly, it caught us a little off-guard."

The same thing appeared to happen in '99. Oregon jumped to a 17-7 lead on two touchdown passes by quarterback A.J. Feeley. It's easy to imagine that if what happened next did not happen next, then Saban's Spartans wouldn't have won their next five games that season, and they wouldn't have gone 9-2 during the regular season, and LSU wouldn't have offered Saban double his salary in order to steal him away from the Spartans.

It's easy to imagine that if what happened in the second half of the first night of the 1999 season had not taken place, then Nick Saban might have gone 6-6 again, and he might have lost his job at Michigan State, and he might have slipped back into the NFL as an assistant coach, and from there, who knows what kind of peculiar path his life might have taken?

But what happened next did happen next.

Michigan State's sidewinding kicker, Paul Edinger, screwballed a short field goal through the uprights, and Michigan State quarterback Bill Burke scrambled and threw a beautiful touchdown pass with 3:03 remaining in the third quarter to tie the game. As the fourth quarter began, Oregon was driving, potentially for the game-winning touchdown, pounding the ball behind a porterhouse-thick tailback named Reuben Droughns.

And that's when this crazy thing occurred, one of the most crucial plays of Saban's career, as well as the most nakedly Hollywood moment in Michigan State history.

Oregon tried to pound the ball into the line with a backup running back, Herman Ho-Ching. The ball was torn out of his hands, and it careened into the arms of ... Amp Campbell, who returned it 85 yards for what would turn out to be the game-winning touchdown, who would end the '99 season as a first-team All-Big Ten selection.

"The ball just bounced right into my arms," he says. "I told myself, ‘I can't let anybody catch me. I've got to score.'"

All these years later, this still feels like a turning point, and not just for Campbell.

For Saban, who would win his first national championship four years later ("It definitely helped him out as well," Campbell says).

For Michigan State, which would spend another decade grasping for its own identity until Mark Dantonio -- who was Campbell's position coach back in 1999 -- happened along and re-established the conservative style that Saban spent several years attempting to perfect in East Lansing.

And for Oregon, which, after losing several key games in the late ‘90s, would continue to ratchet up both its helmet game and its offensive game into the most amped-up machine of the modern era.

Maybe you could see the outlines of all this in 1999, but without Amp Campbell's presence, maybe it all plays out differently. Without Campbell's remarkable return, maybe college football as we know it is nothing like we know it to be.

"If (Kent State) didn't play on Saturday, and I wasn't in this business," Campbell says, "I would definitely be there in Eugene."

Saturday college football, Week 2: Michigan State-Oregon and all the other stuff