Ohio State is an amazing 8-0 all-time against Oregon

When No. 2 Oregon faces No. 4 Ohio State for the College Football Playoff National Championship, the Ducks have a lopsided history to avenge.

Share All sharing options for: Ohio State is an amazing 8-0 all-time against Oregon

Considering Ohio State is one of college football's biggest powers and Oregon was a mediocre program for its first eight decades, that 0-8 mark might not surprise you. But it's by far the Ducks' worst record against any opponent, with Ohio State averaging a 15-point margin of victory. Only a 20-year-old 0-3 record against Hawaii comes anywhere close.

And the series record is one of the Buckeyes' two best, along with an 8-0 record against Washington State, but none of those wins over the Cougars were in bowls. The Buckeyes are responsible for the Ducks losing two of their seven all-time trips to the Rose Bowl.

This is just the second time Oregon has ever been ranked heading into a game against the Buckeyes, while Ohio State will put a top-10 ranking on the line against the Ducks for the seventh time.

None of that matters this season, of course. But older Oregon fans would surely love nothing more than for their first national title to come against a longtime nemesis.

Head coach Woody Hayes' seventh Buckeyes team claimed the school's third national title in a thriller over the unranked Ducks. After Ohio State took the lead on a 34-yard field goal with 14:02 remaining, Oregon had a couple of chances to pull off the upset. But a fumble at the Buckeyes 24-yard line was costly, and with 47 seconds left, a Jack Crabtree fourth-down incomplete pass from Ohio State's 43 sealed it.

The Ohio State win clinched the No. 1 ranking in the UPI poll. The game was Oregon's first Rose Bowl appearance since 1920, and the Ducks wouldn't make it back until New Year's Day 1995.

Another claimed national title season for Hayes. After opening with a 7-7 tie against TCU, the Buckeyes won six in a row before taking on Oregon in the penultimate game. Ohio State then hammered Michigan in the season finale.

Despite winning the Big Ten championship, the school's faculty voted to turn down an invitation to the Rose Bowl, apparently because "football was becoming too big at Ohio State; it was superseding the true mission of the school, and something had to be done to put the program in its proper place."

The 1962 season was a down year for Hayes. The Buckeyes finished 6-3 overall and 4-2 in Big Ten play, losing to UCLA, Northwestern, and Iowa. However, they beat Oregon and Michigan by a combined 54-7.

The Ducks entered with a 6-1-1 mark, having lost to No. 4 Texas and tied Washington. After falling in Columbus, they ended with a 20-17 loss to rival Oregon State.

1967 was a year of firsts for Oregon. The Ducks had a new head coach, Jerry Frei, and it was the inaugural season for Autzen Stadium. In fact, the game against Ohio State took place on the stadium's dedication day.

Oregon-Ohio State was the dedication game at Autzen Stadium in 1967. My dad's first season as head coach. pic.twitter.com/373pca7x69

Apart from the festivities, the on-field action wasn't so great for the home team, which finished 2-8.

That the Buckeyes have only traveled to Eugene once despite the Ducks visiting Columbus five times further illustrates the difference in historical standing between the two.

Rex Kern, who had 162 yards against Oregon, was one of the '68 team's three eventual College Football Hall of Fame sophomores, along with safety Jack Tatum and lineman Jim Stillwagon. Malcolm Emmons-USA TODAY Sports

These Buckeyes may have been the best team in school history. One of five Ohio State squads to ever finish unbeaten and untied, the Bucks won by an average of 17 points and defeated No. 2 USC in the Rose Bowl.

Oregon, playing in its first season in the Pacific 8 Conference, won three in a row after falling to Ohio State, but the Ducks ended with a 4-6 record. 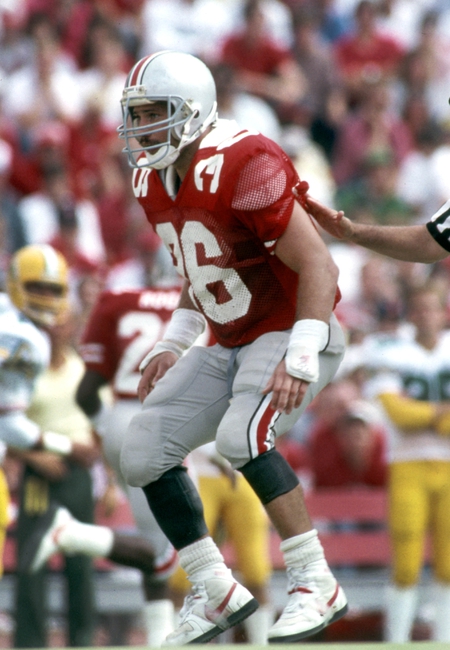 Ohio State LB Chris Spielman, on his way to 15 tackles and a sack against Oregon in 1987. Malcolm Emmons, USA Today

Ohio State's offense was a juggernaut. Led by 1,558-yard all-purpose back Keith Byars, the Buckeyes averaged 34.2 points per game, ranking third in the country. Oregon, on the other hand, put up just 13.8 points per game, which ranked 106th out of 112. Byars barely broke a sweat against the Ducks, with just eight touches on the day.

Ohio State went on to a Fiesta Bowl win over Pittsburgh. Oregon compiled its 12th losing season out of 13.

Rich Brooks was in his 11th season as Oregon head coach, still slowly rebuilding a program that hadn't played in a bowl game since the 1963 season. The Ducks entered the AP Top 25 for the first time in 17 years, ranking No. 16 after beating then-No. 9 UCLA to reach 4-1, with that lone loss coming against a Buckeyes team that had yet to lose three in a row. Both finished with six wins and unranked.

Even though this score looks more respectable than previous meetings, it wasn't close. The Ducks' touchdowns both came in the final seven minutes.

Oregon was favored by four points and playing on its side of the country. But Ohio State allowed just 260 yards and 12 first downs as quarterback Terrelle Pryor led two second half scoring drives. The game helped establish the now-obsolete narrative that Oregon's offense is based on finesse and can't compete against teams with big defenses.