Alabama's the underdog at Georgia, but should probably be the favorite

If Nick Chubb and the Bulldogs knock the Tide out of the Playoff race, it'll still feel like an upset, won't it?

Share All sharing options for: Alabama's the underdog at Georgia, but should probably be the favorite

This week's F/+ ratings really only trust one team. And that team might have two losses come Sunday morning.

If you're looking for a succinct way to describe this season's odd parity, there you go. Alabama, with as big an F/+ lead over No. 2 Ohio State as Ohio State has over No. 17 Texas A&M, has already lost at home (to No. 3 Ole Miss) and is a 2-point underdog as it faces Mark Richt's burly Bulldogs on what will apparently be a sloppy track (3:30 p.m. ET, CBS).

If this game comes down to pure motivation, give the AP No. 13 Tide the edge. No. 8 Georgia (No. 7 in F/+) could absorb a loss, finish 11-1 and still be in position to reach the Playoff with an SEC title.

For Alabama, however, this might be an elimination game. We don't yet know how the committee would respond to a second loss by a true contender, but it won't be favorable. And the fact that failure to earn a win would put Alabama two losses and a tie-breaker behind Ole Miss in the SEC West would damage the Tide's chances even further.

Never say never, but if Alabama loses on Saturday, Nick Saban's squad probably won't be playing for a national title. And then the "Is this the end of the dynasty???" columns we saw a week and a half ago would find a new gear.

While the spread slightly favors Georgia, the S&P+ picks are a sign of just how much the numbers trust the Tide. They are projected to win by approximately a 32-20 margin.

Marquee coaches, star players, high stakes, five-star future pros banging into each other, the first Bama-Georgia game since the classic 2012 SEC Championship, a rare Bama must-win in October: this is a big game by any definition.

1. Nobody runs on Alabama. But nobody else has Nick Chubb.

This is Nick Saban's kind of game. No spread, no dual-threat quarterbacks, no opponent attempting drastic tempo. Just old-fashioned tactics and group collisions.

Be careful what you wish for, though. New Georgia offensive coordinator Brian Schottenheimer might not be particularly innovative, but you don't have to be when you've got Chubb.

Only 12 offenses have pulled off more 20-yard gains than Georgia has, and most -- like Baylor, Cal, TCU, Bowling Green, Texas Tech -- are operating at much higher tempos. Georgia stresses you with playmakers and pummels you with Chubb, who has gained at least 100 rushing yards in each of his last 12 games.

Chubb has figured out a way to surpass what he was doing last year; he's averaging 8.4 yards per carry, and despite losing work to other running backs (Sony Michel and Keith Marshall are getting 14 carries per game) and the scoreboard (Georgia's won three of four games by at least 32 points), he's on pace for a 2,000-yard season if UGA makes the SEC title game. While he has been overshadowed by the video-game-boss exploits of LSU's Leonard Fournette, extending his 100-yard streak against this defense would garner headlines.

Chubb is gaining at least five yards on 53 percent of his carries, and while Michel's all-or-nothing style has brought UGA's efficiency numbers down, the duo has all the explosiveness you could want, behind an experienced line.

Efficiency will be key. Despite facing two high-quality teams in Wisconsin and Ole Miss, Alabama ranks fifth in rushing success rate allowed and third in overall Rushing S&P+. The Tide are their typical swarming selves, both getting a surge in short-yardage situations (second in power success rate) and preventing open-field running. Georgia has had the most successful short-yardage offense in the country so far; immovable object, meet irresistible force.

This will be a bit of a new experience for Alabama. Opponents are doing everything in their power not to run on the Tide; Alabama is facing only a 50 percent run rate on standard downs (112th in the country) and 14 percent on passing downs (128th out of 128). This defense's reputation precedes it.

But Georgia's going to run the ball. Schottenheimer is letting quarterback Greyson Lambert take some shots on passing downs, but UGA is rushing two-thirds of the time on standard downs.

It's been a while since Alabama's had an impressive pass rush. That's partially by design; Saban's and Kirby Smart's defense is based on leverage, swarming and gang tackling more than risk. But the baseline sack rate has still been lower than preferred over the last couple of seasons.

The needle seems to be pointed up. Alabama ranks 42nd in Adj. Sack Rate; the Tide aren't generating a ton of pressure on passing downs, but linemen Jonathan Allen and Da'Shawn Hand are beating linemen by themselves. They have combined for 5.5 sacks, while everybody else on the team has just 4.5.

Pressure could be vital. Alabama's secondary is still the weakest link in the defense, and Greyson Lambert has proven that, when given time, he can do devastating things. Since beginning the Vanderbilt game 0-for-7 against the Commodores' increasingly tricky defense, he has completed 44 of 49 for 592 yards.

Some potentially concerning stats on Greyson Lambert for #UGA fans looking ahead to Bama… pic.twitter.com/xCNur1Kb2w

Lambert has been hit so infrequently, it's like he's wearing a protective practice jersey.

Alabama's defensive approach has varied drastically based on down and distance -- aggressive on standard downs (which could open up play action opportunities), willing to risk inefficiency on passing downs (which means fewer sacks or turnovers). Given the opportunity to complete seven-yard passes to Malcolm Mitchell on third-and-7, Lambert will oblige. Can Bama apply the pressure, especially if Allen is limited with a shoulder injury suffered against ULM?

Mitchell is having one hell of a senior season. He has caught 20 of 23 passes for 306 yards and three scores; Georgia's next five wideouts: 30 targets, 22 catches, 258 yards.

3. Alabama stretches you horizontally. Vertically, however? 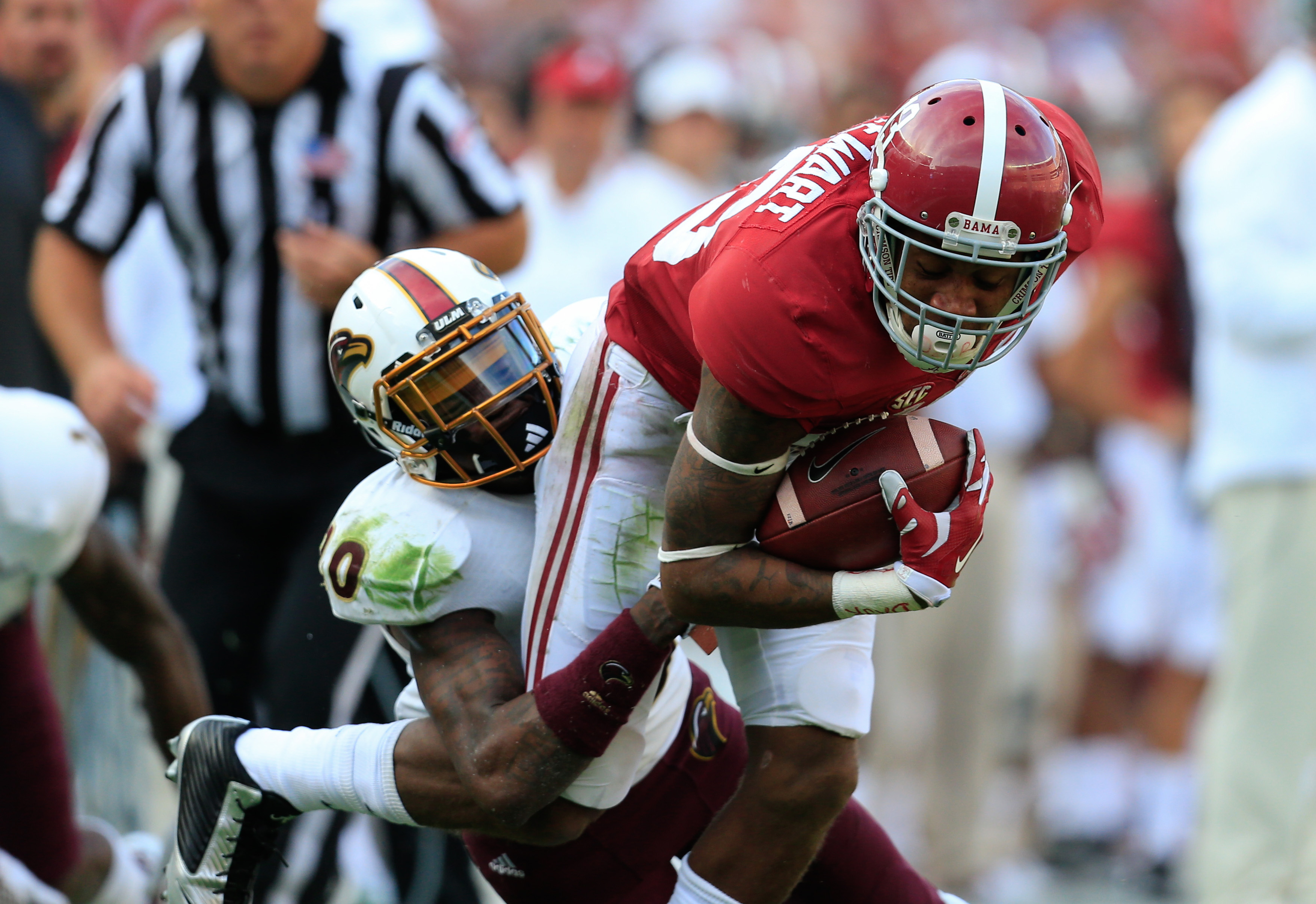 Lane Kiffin loves horizontal passing. It is a smart idea. Even if it is only marginally successful, forcing a defense to man the field from sideline to sideline means you might open up running lanes between the tackles and vertical passing opportunities along the sidelines.

This means Kiffin's philosophy shares some real estate with that of Art Briles, especially when you consider that Alabama is also operating with a top-30 tempo. But Kiffin's offenses don't look to go deep quite as much. And Briles' offense doesn't have Derrick Henry.

In any other conference, Henry's exploits -- 17 carries per game, 6.3 yards per carry, two scores per game -- would garner major attention. In the SEC, his production is lagging far behind that of Fournette and Chubb. Still, he and Kenyan Drake are combining for more than 25 carries per game at more than six yards a pop, and Alabama ranks ninth in Rushing S&P+.

That makes it awkward that Kiffin is calling so many passes. Alabama is running 55 percent of the time on standard downs (87th) and 24 percent on passing downs (99th). Alabama's top three wideouts (ArDarius Stewart, Calvin Ridley and Richard Mullaney) are averaging just 8.4 yards per catch with a 56 percent catch rate, a miserable 4.7 yards per target. Robert Foster, who was both a little more efficient (83 percent catch rate) and explosive (11.6 yards per catch), is out for the season with injury.

Coker is not efficient, and while Cooper Bateman has massive potential (he's completed 30 of 40 passes so far), his mistakes against Ole Miss have prevented Kiffin and Saban from handing him the full-time reins.

The passing probably won't stop on Saturday. Georgia opponents have figured out that the Dawgs are geared to stop the run on standard downs and the pass on passing downs, and offenses are trying to do the opposite. Georgia has been all sorts of efficient against the run; the Dawgs are allowing only a 26 percent success rate on the ground, seventh in the country.

But big plays have been an occasional issue -- successful run plays tend to go for 10 to 20 yards -- and Henry's a big-play guy the size of a fullback. Can Alabama pull off the balance between setting up the run and killing Georgia with it?

Your two leading tacklers aren't usually also your two most disruptive players, but Leonard Floyd and Jordan Jenkins are major exceptions. The two outside linebackers have combined to make 16 percent of Georgia's tackles, plus 40 percent of the Dawgs' tackles for loss, 63 percent of their sacks and 32 percent of their QB hurries.

While Alabama's three-man D line makes some plays, Georgia's occupies blockers for one of the country's most disruptive sets of linebackers to create havoc against run and pass. Run defense, an occasionally crippling issue last year, has become far more consistent, and Floyd and Jenkins are forming quite the two-man pass rush. Combined with solid safety play from Quincy Mauger and Dominick Sanders, coordinator Jeremy Pruitt has found a balance of steadiness and aggressiveness.

The big run plays are still a concern. Alabama's offensive line is the first good one Georgia has faced, and if it's able to get Henry and Drake to the second level of the defense with any frequency, the Tide will be awfully hard to stop.

Get one roundup of college football stories, rumors, game breakdowns and Jim Harbaugh oddity in your inbox every morning.