College football has more undefeated teams than normal. Week 7 should fix that.

There are 16 remaining undefeated teams in FBS. With games like Florida-LSU, Texas A&M-Alabama, Michigan-Michigan State and Northwestern-Iowa, Week 7 will correct that.

Share All sharing options for: College football has more undefeated teams than normal. Week 7 should fix that.

We've talked a lot about how chaotic this season has been, how nobody seems to be playing elite ball yet, how everyone is beatable, how we're on our way to Another 2007™. But we tend to say that every year. Teams don't often differentiate themselves that quickly.

It has been a surprising season so far, though. Ohio State, for instance, has appeared far more mortal than anticipated, while TCU and Michigan State have toyed with fire instead of putting opponents away. Those three made up 60 percent of the preseason AP top 5, and Nos. 6 through 9 (Auburn, Oregon, USC, Georgia) are a combined 13-9.

I can talk all I want about how well Alabama, Michigan and Stanford have played, but they've suffered losses. Until other teams join them, they're on the outside of the Playoff race.

But if you're in search of chaos, you might get your wish. Fifteen of the 16 undefeated teams are in action this week (Oklahoma State gets a rest after three consecutive unlikely wins), and according to S&P+ win probabilities, six have a less than 50 percent chance of winning. Only five are above 75 percent. 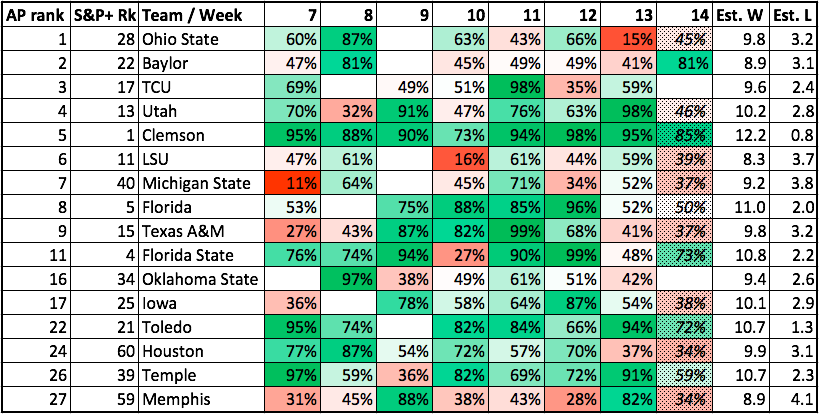 * I included approximate conference title game odds. Obviously not all 13 teams with conference title odds will play in those games. It would be unfair to ask Iowa to play Michigan, Michigan State and Ohio State at the same time. Also, these don't quite match the win probabilities in this week's advanced stat profiles, which are still using last week's numbers. Maintenance and verification in these profiles are tricky, apparently.

As a whole, S&P+ win probabilities have been overshooting. Teams given a 70-79 percent chance of winning have won 87 percent of the time, for instance. But we saw a little needed regression last week.

The ratings are still settling in. Baylor's strength of schedule (124th in FBS with wins over No. 100 SMU, No. 120 Kansas, No. 124 Rice and FCS' Lamar) has skewed the Bears' numbers, but they could surge quickly if they do well against opponents with a pulse. Their probabilities could be artificially low because of that, and underachievers like Ohio State and Michigan State could at any moment begin to look how we expected. Plus, Florida's starting quarterback was just suspended for the rest of the season. The Gators' odds could soon shift in the wrong direction.

Regardless of whether you think Michigan State's odds against Michigan (11 percent) or Baylor's against West Virginia (47 percent) are too low -- and I do -- this gives you a pretty fun Upset Watch guide.

Week 7 win probabilities, from lowest to highest (All times ET)

There's about a 97 percent chance that, by the time the Saturday noon games end, at least one of the 16 undefeated teams will have suffered a defeat. That should set a nice tone for the mid-afternoon heavyweight battles (Michigan-Michigan State, Alabama-A&M) before Florida-LSU highlights the evening session.

Setting the stage for November

November is when the college football season truly begins. The first two months are about jockeying for position. We follow countless story lines knowing that quite a few will exit before November rolls around.

With that in mind, let's take a look at the teams with the best chances of entering November undefeated. Here is each team's odds of getting through the next three weeks unscathed:

If A&M or Michigan State survives this week, their odds will rise significantly. Not only because they will have bucked bad Saturday odds, but because that might be a sign that they're much better than the numbers have posited, and that their odds of winning future games should rise. But first, both have to figure out how to score against the two toughest defenses in the country.