Michigan fans, it's a good sign for your program that the Michigan State ending hurts this badly

Michigan State's unlikely win kept the Spartans in the national title race and, in the most morbid way possible, welcomed Michigan back to the world of big-time college football.

Share All sharing options for: Michigan fans, it's a good sign for your program that the Michigan State ending hurts this badly

College football's draw is obvious. The level of play isn't what you find in the NFL, sure, but it's good. The level of personality dwarves the NFL's 10 times over. Teams don't change cities. They rarely change stadiums. Fight songs. Rivalries. Weird trophies. Et cetera.

A 12-game schedule is frustrating from a statistical standpoint, but it means just about every game has implications. There's a pyramid of sorts: National title, conference title, bowl eligibility, conference rivalry, coach status, etc.

Michigan State-Michigan checked every level of the pyramid.

For more than 59 and a half minutes, it was a beautiful, simple game. Michigan proved its top-flight bona fides, playing well in its most consequential home game in years.

State had proved in September and October that it could still find fourth or fifth gear and play like a top team when it needed to, but the Wolverines held a 23-14 lead with nine minutes remaining and seemingly iced the game with a late stop.

This was a wonderful game; important, tense, well-played, back-and-forth. And when Michigan's Dymonte Thomas and Channing Stribling broke up a fourth-down pass to Macgarrett Kings with 1:47 left, it looked like this lovely October contest had found its ending. All Michigan had to do was work the clock down to nearly nothing and maybe get a punt off, and the Wolverines would be 6-1, the talk of college football and owners of the Paul Bunyan Trophy.

The Wolverines had affirmed their high computer rankings, the Spartans had probably improved theirs and everybody was just about ready to go home.

The game was already memorable.

Michigan could only gain eight yards on three plays, meaning there was a punt coming with 10 seconds left. When Blake O'Neill, purveyor of an 80-yard punt earlier in the game, took his place, Michigan State's win probability was somewhere in the 0.2 percent range. MSU's equipment staff had given up the trophy. A Grand Rapids TV station was already in the middle of its live report on UM's win.

And then, these faces.

College football is the sports version of those YouTube videos where everything is calm, and then a screaming demon pops up on the screen. You are enjoying it, it makes sense to you and suddenly you're trying not to pee yourself.

Three weeks ago, Texas Tech and TCU played in an instant classic, a game-of-the-year candidate with a fantastic, devastating ending. When Aaron Green caught a deflected touchdown with 23 seconds left, it set Twitter afire and created the largest-ever swarm of surrender cobras. 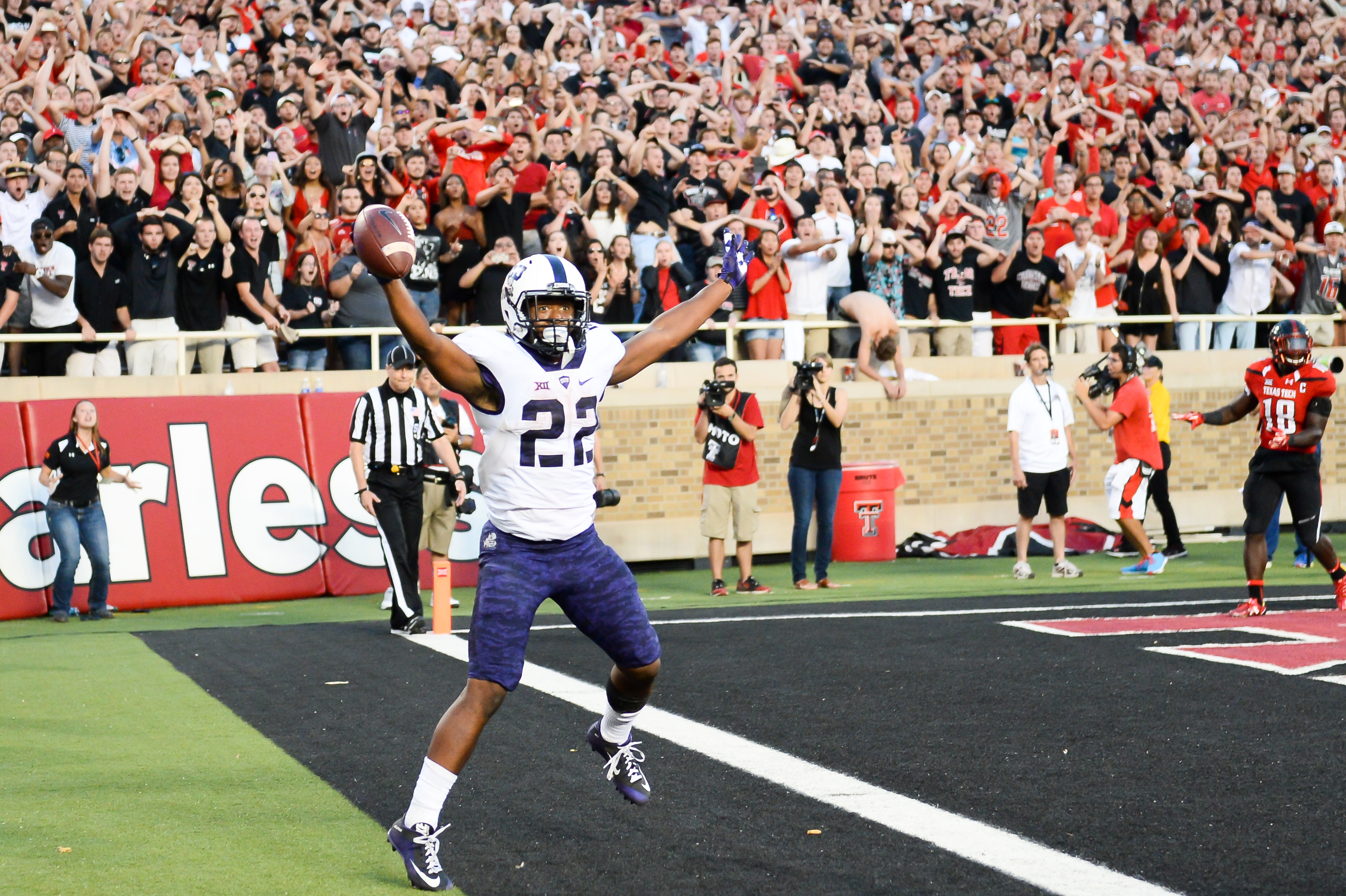 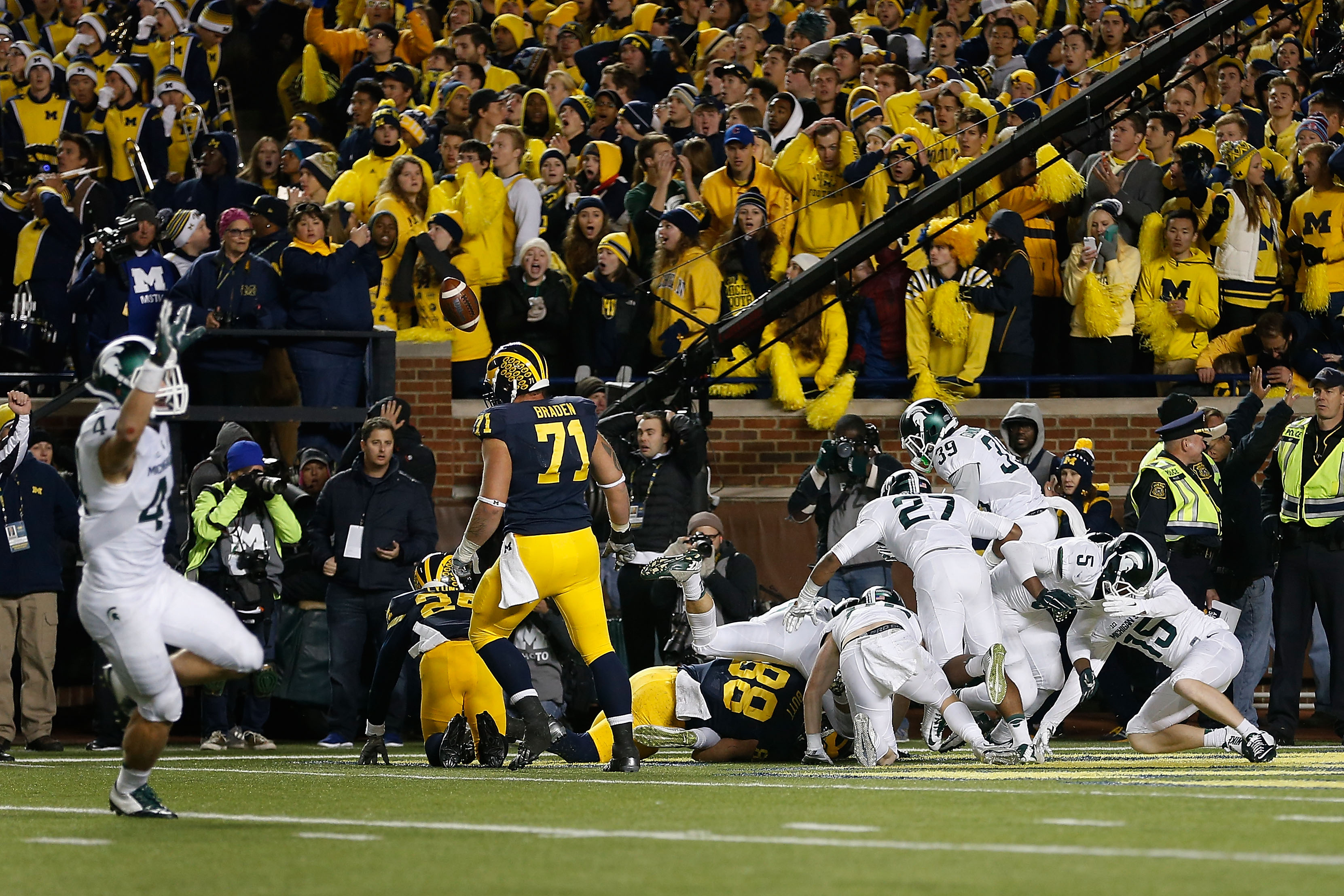 In recent years, college football has saved its craziest for its most important games. This was the most momentous twist since Auburn beat its two biggest rivals, Georgia and Alabama, with fluky finishes on its way to the national title game.

We have to see how the next seven weeks play out before we know if we'll be looking back on Saturday's turnaround with the same reverence as the Kick Six. But whatever happens moving forward, the Gift Six (Mich Six? Punt Six? Quick Six? Michigan State Miracle? The Punt?) was significant, and not only because defensive back Jalen Watts-Jackson, scorer of the gift touchdown, broke his hip while scoring.

It all but eliminated one of the best teams in the country from the title race.

Michigan still ranks a healthy fourth in the F/+ ratings, ahead of all but two undefeated teams (Clemson and Baylor), in part because of the work the Wolverines did before Saturday and in part because the events of Saturday would have still resulted in a Michigan win 68 percent of the time (I'm sure that's quite comforting to Wolverine fans).

Now the Wolverines must find their motivation after what was nearly the most gutting loss imaginable. They get a well-placed week off before a stretch of three road games in four conference battles (Minnesota, Indiana, Penn State). If they can get to Nov. 28 without setbacks, they could have a chance to secure a tie for the Big Ten East against Ohio State (if the Buckeyes were to defeat Michigan State, that is).

If there's a robust amount of November chaos, a Playoff bid could still be on the table. But all margin for error is gone.

Michigan State, meanwhile, has every goal still on the table.

The Spartans have rarely shown the top-flight level they were expected to show in 2015 -- Saturday might have given us our first glimpses, actually -- but every win gives you another opportunity to find it. Sparty hosts Indiana on Saturday (the Hoosiers just suffered their own devastating loss, blowing a big lead to Rutgers), then takes on Nebraska and Maryland before a Nov. 21 trip to Columbus.

This was only the first of what will likely be a three-round, round-robin battle for the Big Ten East. And it was just about the most beautiful college football experience imaginable.

Two years ago, after my Missouri Tigers suffered their most gut-wrenching loss in years, I wrote the following:

We show off our scars to each other as a form of brotherhood. Pain unites us. Pain is all that is guaranteed when we become fans. Hell, even Alabama fans can regale you with stories of pain, and they've collectively suffered less than any fanbase. We've all been there. And if you don't feel enough pain after a loss, that might be a sign that your team is losing too much. That this Missouri loss felt so bad is a morbid sign of progress, confirmation that the Tigers are back on the right track after last year's trip-ups. If the loss had moved Missouri to 3-5 instead of 7-1, the feeling would have been one more of anger or resignation. This was pure, soul-crushing heart break. The best kind.

A loss like this -- fluky, last-second, to one of your two biggest rivals, one that has now beaten you seven of eight times -- will always hurt. But the fact that it hurts like this is a morbid sign of progress. Last year, we would have viewed this as the ultimate in Michigan's series of Keystone Cops blunders. This year, it had national title implications. Progress doesn't always come in the form of big wins.

And if this is meant to be an Auburn-esque season for Michigan State, I can't wait to see how the Spartans get past Ohio State.