The MAC was the second-best mid-major in 2015, and bowl season's helping to prove it

The American's place in the New Year's Six is well-earned, but the MAC's two Tuesday wins included the single biggest mid-major showcase bowl of the season.

Share All sharing options for: The MAC was the second-best mid-major in 2015, and bowl season's helping to prove it

The No. 2 mid-major conference

It was a pretty damn good year for the MAC. Toledo beat a couple of power-conference teams (but didn't win its own division, which gives the impression of solid depth), and more importantly, fewer teams were outright bad.

Only one MAC team ranked worse than 111th in the F/+ rankings heading into bowl season, compared to six Conference USA teams, four Sun Belt teams, and two each from the Mountain West and American.

In F/+ averages, the MAC ranked a healthy seventh in 2015, second among the Group of 5.

On Tuesday, the conference backed those ratings up.

Akron, the seventh-best MAC team according to F/+, survived a late comeback from Utah State (No. 3 in the MWC) to secure the program's first bowl win, a 23-21 conquest in the Famous Idaho Potato Bowl.

A conference's quality has been mostly set by the time bowl season rolls around, and a couple of December surprises shouldn't sway our general opinions. Bowl performances are too unpredictable for that. But bowls can give you a sense of affirmation, and they can put a bow on a lovely season. Tuesday was a bow day for the MAC.

Akron was late to the MAC party, joining FBS permanently in 1987 and completing MAC membership in only 1992. Gerry Faust's Zips went 7-3-1 and 5-3 in conference play that first season, and Lee Owens managed a couple of seven-win seasons, but in a world that didn't include a bowl bid for every postseason-eligible team, the Zips had to wait until 2005 to play in a December exhibition.

J.D. Brookhart's Akron engineered a surprise MAC title and Motor City Bowl bid in 2005, but in front of 50,000 in Detroit, Akron fell to Memphis, 38-31. And then the program cratered.

Two entities in need of redemption found each other. Terry Bowden, the once-failed and twice-successful former Auburn head coach, took the reins in 2012.

Bowden got his first head coaching job at Salem University at the age of 27 and at Auburn a decade later. He began 20-1-1 on the Plains despite probation and went 10-3 again in 1997. But he got on the wrong side of influential boosters, began 1998 with five losses in six games, and resigned.

After a decade in sports broadcasting, it was time for Bowden's second coaching career. He took over at Division II's North Alabama, brought in a series of Division I transfers, and won 29 games in three years. At Akron, he took the same approach. His 2015 defense is a mix of local five-year talent and power-conference transfers, and it guided the Zips to a 7-5 record despite offensive issues.

In Akron's first bowl win -- Bowden's first since the 1997 Peach Bowl -- the Zips' defensive front defeated Utah State's offensive line, making a living in the backfield and forcing allowing no positive yardage on 29 of 74 USU snaps. 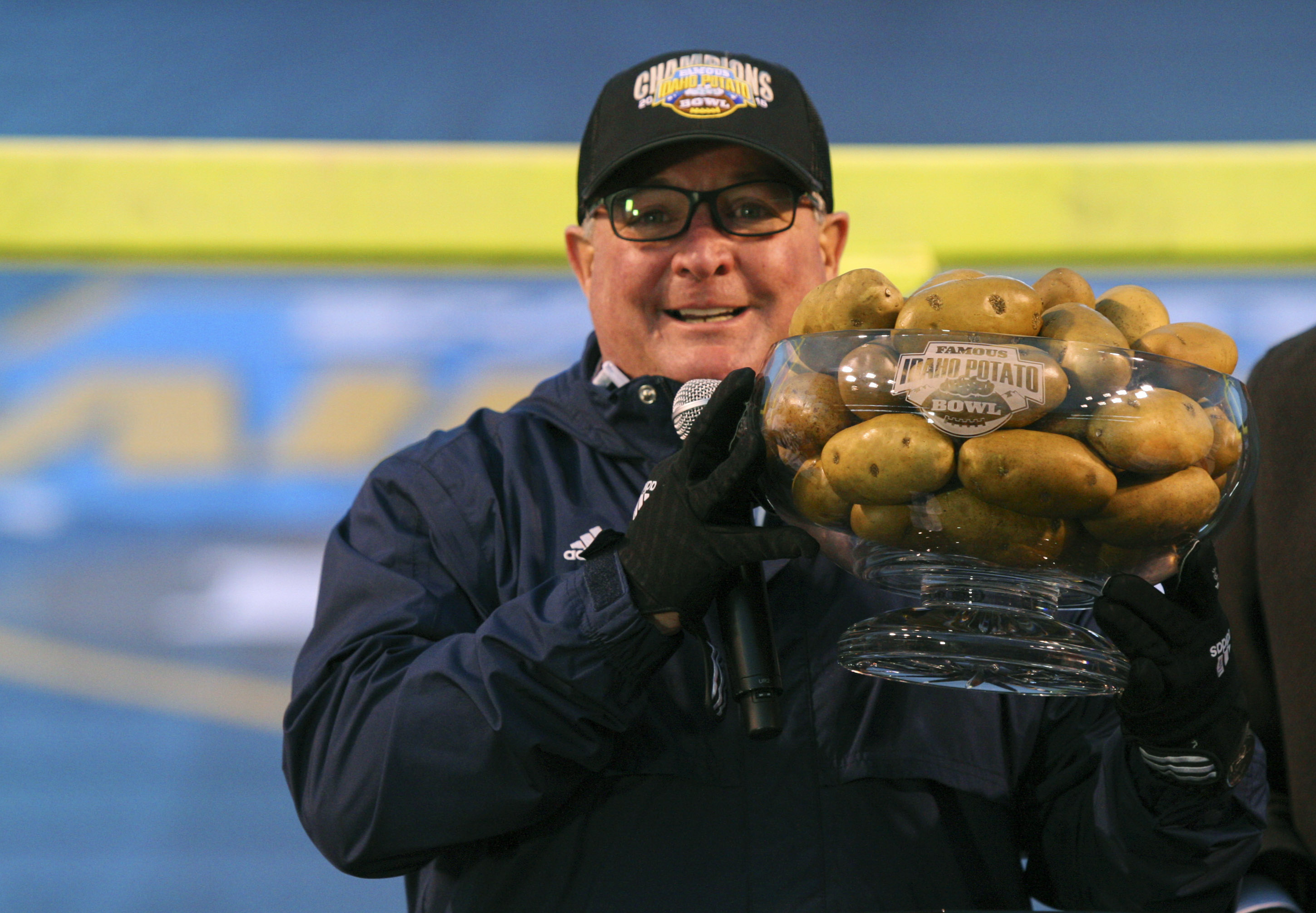 When your father is Bobby Bowden, you are destined to be, at best, the No. 2 coach in your family. In front of his father, Terry Bowden found redemption for both his career and his employer in Boise. It's always the last place you look.

Shaky as it was, Utah State's offense outgained Akron's by one full yard per play, 4.9 to 3.9. Akron had seven full drives that gained three or fewer yards, and it allowed USU to find its footing in the game despite its own offensive issues.

Still, Akron won because of two of the Five Factors: finishing and turnovers.

Utah State created six scoring opportunities (first downs inside the opponent's 40) to Akron's five, but the Zips turned all five chances into points -- three field goals and two touchdowns. The Aggies scored three touchdowns, but also turned the ball over twice and turnover the ball over on downs once.

Worse yet, one of the turnovers -- a fumble in the closing seconds of the first half -- turned a Utah State scoring chance into an Akron field goal. Jatavis Brown sacked and stripped Kent Myers, and Rodney Coe (one of the aforementioned transfers) returned the ball 56 yards to the USU 12. He was tackled with four seconds left in the half, and Robert Stein kicked a 29-yard field goal as the quarter ended. In a game decided by two points, that was quite a swing.

Turnovers were the story. In terms of equivalent points derived from field position lost and field position gained, Akron had one turnover worth 2.9 points, and USU had three worth 17.3. A 14-point deficit in the turnovers department wipes out a yardage advantage.

The most memorable play of the Boca Raton Bowl was what appeared to be a superbly executed, one-man onside kick. With Temple down 25-17 and 2:50 left on the clock, Owls kicker Tyler Mayes booted the ball between two batteries of Toledo players, then lunged and nearly recovered before seemingly every player on both rosters piled on.

Temple celebrated because it appeared the Owls had the ball. By the time the refs got to the bottom, Toledo's Robby Anderson had ripped the ball away. Three plays later, Kareem Hunt weaved 41 yards for the game-clinching touchdown.

It was a semi-controversial end note for a game that was two games in one.

In the first and third quarters, Temple outscored Toledo, 9-0, and outgained, 182-57. Average yards per play: Temple 5.4, Toledo 2.9. Toledo came out of the gates cautious and inaccurate, and Temple was able to ease ahead. In fact, the Owls could have seized complete control if they hadn't had to settle for three field goals.

Instead, the Owls' brief failures gave Toledo time. And the second and fourth quarters belonged to the Rockets, just like the ball did at the bottom of the pile. In these quarters, Toledo outscored the Owls by a 32-8 margin and outgained them, 378-153. Average yards per play: Toledo 9.0, Temple 3.7.

Rockets quarterback Philip Ely was able to find his rhythm as each half wore on. In Q2 and Q4, the senior completed 17 of 21 passes for 263 yards and two touchdowns. An 80-yard strike to Cody Thompson gave the Rockets what would become an insurmountable 19-9 lead early in the fourth quarter.

Temple lived and died with an aggressive defense in 2015; the Owls had one of the most efficient defenses in the country. The risk-reward ratio skewed toward the former as each half of the Boca Raton Bowl wore on.

Toledo proved its top-25 credentials against a good Owls team that reached the title game of a good conference. A slip-up against Western Michigan kept the Rockets from finally getting back to the MAC title game, but this was still Toledo's first 10-win season since 2001, and the Jason Candle era -- he took over as head coach when Matt Campbell left for Iowa State -- began 1-0.