Ten years ago, Ladd Peebles Stadium was the home of the Senior Bowl, a young bowl game, and some concerts. That's not a bad lot in life, certainly. Built in the late-1940s, the stadium had hosted plenty of college football games -- one Alabama game per year in the 1950s and 1960s, some Auburn games, some Southern Miss games -- and was outfitted with new field turf in 2004. It just didn't have a home team. 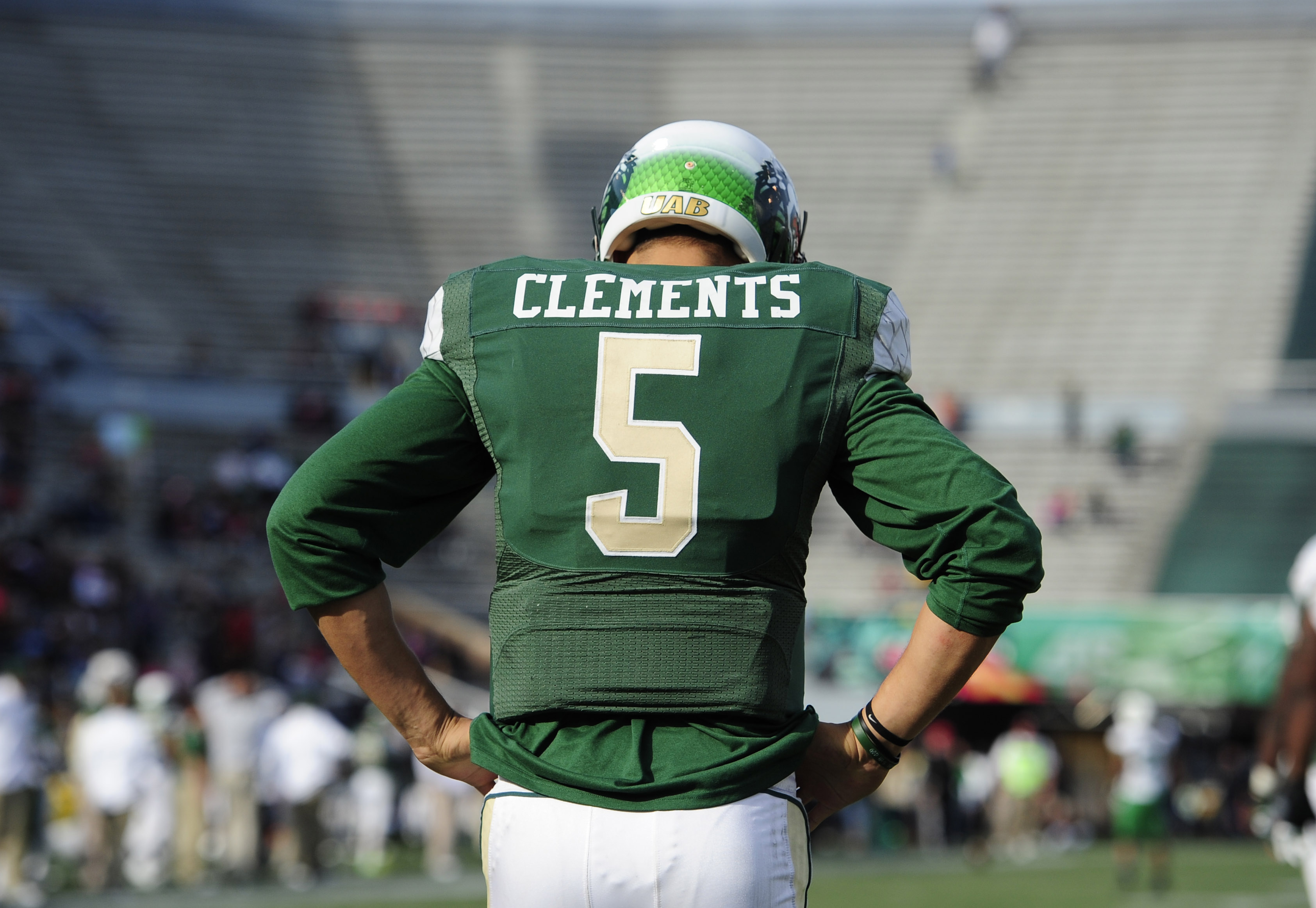 Biggest strength: A lot of the good parts of last year's UAB offense

Biggest question mark: A defense that has to replace almost every playmaker

In one sentence: Joey Jones has done a remarkable job of turning South Alabama into an upper-tier Sun Belt team, but his Jaguars will probably regress unless an infusion from the now-defunct UAB Blazers program is able to make an immediate difference.

Seven years ago, the University of South Alabama decided to give it one. It added football, hired Mobile native, former Bama receiver, and Birmingham-Southern head coach Joey Jones, and started building the Jaguars.

USA beat Hargrave Military Academy in its first organized game in 2009, won 17 games as basically an unclassified program over the next two years, then went 6-4 in 2011 as an FCS independent. The Jaguars beat their first established FBS program, Florida Atlantic, in double overtime during a 2-11 campaign in 2012, then rode a feisty defense to 6-6 in 2013. They were not selected for a bowl that year, but after a second straight 6-6 campaign, they became the youngest program to go bowling when they accepted an invitation to the inaugural Camellia Bowl in Montgomery.

(And what a bowl it was, with dramatic late bombs and a kick to the coach's nose.)

Jones has been there every step of the way. He was inducted into Mobile's sports hall of fame four years ago, and he has amassed a 37-28 career record at USA. He has laid the foundation and built the house. His initial recruiting class has used up its eligibility. He has bowled.

He has checked all the boxes -- even the "hire an assistant from Bama" box (UA director of player personnel Tyler Siskey is now USA's receivers coach) -- and done all the grunt work it takes to get an FBS program in Alabama off of the ground. And unlike a certain now-defunct program in Birmingham, it appears Jones' program has the institutional support required to live.

Jones has recruited well, and he's proven himself as a head coach. I'm reasonably optimistic that he'll be able to maintain despite some impressive turnover. But it's a test he'll have to pass. Perhaps luckily for him, USA stands to gain more than anybody else from UAB's demise three and a half hours up I-65 in Birmingham.

It is conceivable that as many as six offensive starters will be former Blazers. Jones also hired former UAB offensive coordinator Bryant Vincent and tight ends coach Richard Jones.

This all makes sense. Combine UAB's 2014 offense with USA's defense, and you'd have a top-60 team. There will still be issues relating to continuity and defensive experience, but UAB's exit has thrown South Alabama a lifeline.

South Alabama graded out slightly better than Texas State, but the two teams had similar season trajectories; both had drastically different performances from week to week thanks to one consistently solid unit and one unpredictably bad one.

Whereas Texas State's offense was occasionally awesome, USA's defense was the money unit. The Jags got torched by three good offenses -- Mississippi State, South Carolina, and Navy combined to average 38 points per game and 7.6 yards per play -- and controlled everybody else to the tune of 22.9 points per game and 5.1 yards per play. They were decent down to down but had one of the nation's best red zone defenses (12th in Redzone S&P+), which helped to bail them out of some jams. (Georgia Southern and UL-Lafayette each averaged better than 6.1 yards per play but scored just 47 points combined.)

The offense had its moments, but not nearly enough of them.

The offense was problematic enough despite seniors atop the depth chart at quarterback, running back, and receiver that Jones didn't wait around. He dismissed offensive coordinator Robert Matthews and not only brought UAB's Vincent aboard, but handed Vincent the reins for the Camellia Bowl.

Vincent's throw-caution-to-the-wind game plan against Bowling Green probably wasn't exactly what we'll see this fall, but the fact that he was calling the plays that quickly says a lot about both USA's problems and the confidence Jones has in Vincent, whom he has called a "complete football coach." 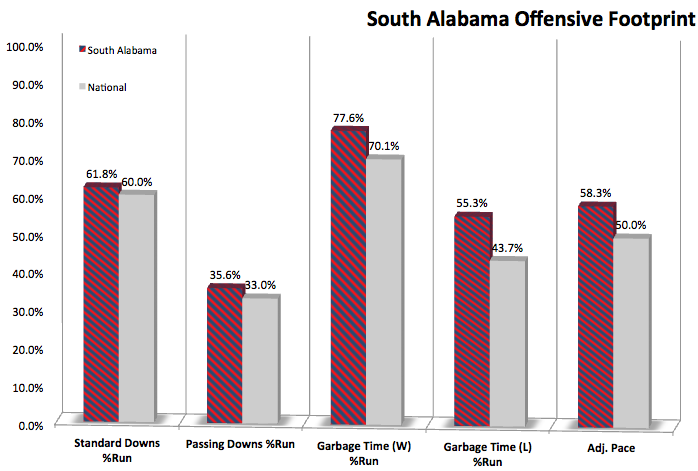 Brandon Bridge had his moments last year. He rushed for 71 yards against Idaho and 137 against Georgia State, and he completed 19 of 28 passes for 339 yards against Appalachian State and threw for four touchdowns against Navy.

But he suffered an ankle injury against UL-Lafayette and missed a couple of games, and when he was bad, he was really bad. He went 2-for-11 against a bad South Carolina defense, and his completion rate for the season was 52 percent. He was USA's first starting quarterback in a bowl, which assures him a place in the Jaguars' history books, but Cody Clements almost certainly represents an upgrade at QB.

Originally a JUCO signee, Clements put up some impressive numbers in his one season playing for Bill Clark and Vincent in Birmingham. He completed two-thirds of his passes, and in a two-week span against Western Kentucky and North Texas, he was incredible: 40-for-48, 620 yards, five touchdowns, one pick. He was held in check by good Louisiana Tech and Marshall defenses, but he still impressed. His efficiency could give this offense a huge boost; Vincent likes to employ a fast tempo, and while deep balls are great, moving the chains and racing to the line to snap again can have a cumulative effect.

Quarterbacks like playing for Vincent, evidently. Not only did Clements follow him to Mobile, so did backups Austin Chipoletti and Evan Orth. Even though Clements is a senior, there's a chance USA's starter will be a UAB transplant for years to come.

It's a lot easier to deal with turnover when you're turning over a bad offense. Yes, Kendall Houston and Jay Jones had their moments at running back. So did Shavarez Smith and Jereme Jones at wideout. That's a lot of experience to lose. But at first glance, the combination of transfers and returnees should provide a similar level of talent and production.

If efficiency is the name of the game for USA, the combination of D.J. Vinson and Xavier Johnson could be quite effective in the backfield. Johnson's 49 percent opportunity rate (meaning 49 percent of his carries gained at least five yards) was remarkable considering he was a freshman and his fellow backs couldn't top 41 percent. Plus, Dami Ayoola hinted at some efficient running with Illinois in 2012.

If the ground game becomes an efficient one, Clements could find quite a few big-play guys downfield in the passing game. Two former Alabama signees -- Danny Woodson II (who erupted in the bowl with six catches for 122 yards) and Marvin Shinn (who was incredibly all-or-nothing) -- have athleticism to burn, and the two UAB transplants, Josh Magee and Gerald Everett, combined to average 17.9 yards per catch and 10.9 yards per target. Throw in a couple JUCO transfers, and you've got about as much experience as one could hope for after losing three of top four targets.

6. Lots to replace up front

USA has to replace both starting guards and an all-conference tackle; the three combined for nine years' worth of starts on a unit that overachieved compared to the rest of the offense. This is a problem, especially for an offense that needs efficiency to establish tempo.

Thanks to injuries and UAB transfers, there's still experience. Chris May, Cam Blankenship, and Joseph Scelfo have combined for 69 career starts, and three others have started at least once. 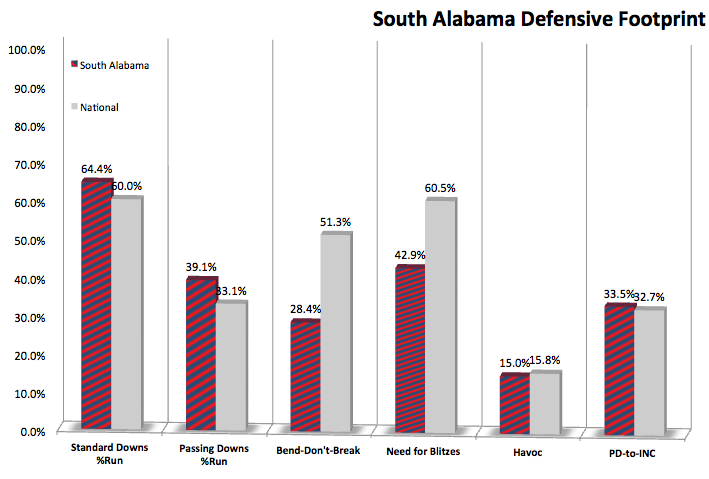 7. The toy box is pretty empty

USA's identity could change in a single offseason. Last year's bad unit has gotten a massive boost. But the defense is starting over. South Alabama had one of the nation's more efficient defenses when it came to forcing passing downs, and again, the Jags were vicious in the red zone.

To the extent that USA's success was a product of coaching, the quality could remain high. USA lost defensive coordinator Kevin Sherrer following some lovely play in 2013, but inside linebackers coach Travis Pearson moved up to the coordinator role, and there was little dropoff. Pearson's back, and for all of the turnover on offense, the defensive staff remains intact.

Plus, a few experienced hands have come to help: JUCO transfer Quinton Lane and UAB linebacker Kalen Jackson, to name two. Jackson had a promising start to 2014 before he was lost for the season to injury.

Still, USA's success could hinge on whether the offense can improve enough to offset some inevitable defensive regression. That'll be easier to do if USA only regresses and doesn't fall off of a cliff.

We'll find out quickly if USA's recruiting has been up to snuff in the front seven. Of the 10 Jaguars with at least 10 tackles for loss last season, two are back, and one (Roman Buchanan) is a safety. End Jimmie Gipson III is a keeper, Kalen Jackson really could be impressive if healthy, and Demarius Rancifer is a great athlete at linebacker. But younger players like sophomore tackle Caleb Butler and three-star freshman (per Composite) Tavon Cox could be thrust into important positions.

USA had a strange defense -- better at rushing the passer on standard downs than passing downs, great at stuffing short-yardage runs but a bit reactive in run defense. The Jaguars had enough athleticism to pull off what was basically an Alabama approach to the 3-4 defense (swarm to the ball, hit hard, pick your spots with blitzes). We'll see if they still do.

9. Some young guns will need to come through

Keeping in mind that a recruiting rating of 0.8000 means, on average, a three-star designation in the Composite ratings, eight Jaguar defensive backs above have been rated at 0.8016 or higher, and a ninth came in at 0.7911. That's awfully impressive for a Sun Belt team.

The problem: only two of those 10 players have really seen action. One (junior safety Roman Buchanan) is an outright keeper, and another (last year's backup nickel back Devon Earl) made a few nice plays when given the opportunity. But USA must replace both starting cornerbacks and free safety Terrell Brigham, and with a potential drop in the front seven, unproven players like redshirt freshman Malcolm Buggs, JUCO transfer Quinton Lane, and star freshman Jalen Thompson might be asked to do quite a bit early.

Looking strictly at losses and the schedule, it's hard to imagine South Alabama reaching another bowl. The Jaguars are one of only three FBS teams to return fewer than nine starters, and the defense has to replace so many playmakers. Plus, the dead weight on the schedule is minimal: only four teams ranked worse than 104th in the F/+ ratings last year, while six ranked 76th or better. Unless USA can put a top-80 team on the field -- which means not only surviving turnover, but improving despite it -- getting to six wins is going to be difficult.

And that's fine. Joey Jones has done enough great things in Mobile to have earned a reset year. He has been recruiting (and coaching) well enough that the program's trajectory is strong even if 2015 is a setback.

Still, the starry-eyed improvement scenario -- the UAB transplants lead to significant offensive improvement, and a proven set of defensive coaches turn excellent athletes into excellent defenders -- isn't unrealistic. Despite being one of FBS' youngest programs, USA seems to have a high floor for a Sun Belt squad. Expect something around 5-7, but don't be too surprised with 7-5, especially if USA can pull an upset of N.C. State on September 26.