The 128-team countdown previews a newcomer that's already starting over.

There are checkpoints to building a football program from scratch. First you've got your feasibility study. Then the university curators/regents/trustees decide, "Yeah, let's do this." Then you figure out the "Where are we going to play? Are we going to need to build something?" issue. Then you hire a coach. A couple of years later, you play a game.

A few years after that, you replace 40 seniors and start over. You signed a couple of recruiting classes before even playing a game, and those players worked their way through the eligibility clock at the same time. It is the final checkpoint.

How you choose to handle this is up to you. You could start from scratch and stick to signing mostly freshmen, accepting that you're going to take a step backwards for a couple of years. Or you could do what UTSA's Larry Coker did: sign a small recruiting class the year before your motherlode of seniors graduates, then load up on mid-year JUCO transfers.

Biggest strength: Options at every level of offense

In one sentence: Injuries wrecked a potential breakthrough, and now Larry Coker must replace 36 seniors in his fifth year.

Senior Day took a while at UTSA. Coker and Roadrunner fans bid adieu to 36 seniors, including 18 members of the program's original signing class. UTSA went from concept to Conference USA contender in a short amount of time, debuting in 2011 and nearly winning the C-USA West in 2013. The Roadrunners moved so quickly that the original class was able to take part in both a surprising surge and a disappointing letdown.

I expected big things of UTSA in 2014, and it looked like they might come to fruition. The Roadrunners whipped Houston and took Arizona to the wire to start the year. But injuries and an offensive meltdown negated defensive gains, and tight early losses led to a 4-8 finish.

Injuries and shuffling meant more underclassmen than expected got playing time, but the Roadrunners still miss their leading passser, their leading rusher, three of their top four wide receivers, five offensive linemen who had combined for 179 career starts, their top two defensive ends, their top three defensive tackles, their leading tackler in the linebacking corps, and four of their top six defensive backs. Coker's large 2015 class could provide a lifeline, but after building chemistry and familiarity, his fifth UTSA team is going to have little of either.

Before a bit of attrition, UTSA headed into the fall with 38 seniors and, therefore, 38 spots to soon fill. You can only sign 25 players in February, but thanks to 13 early enrollees (which counted toward what was a tiny 2014 signing class), Coker indeed brought in 38 players. They include 2014 grayshirts, early high school graduates, two Division I transfers, and eight junior college transfers. For every vacancy, UTSA has three or four potential options. We'll just have to wait to find out if any are good.

Former Michigan quarterback Russell Bellomy and Oklahoma wideout Dannon Cavil are Roadrunners, as are 10 high schoolers and one JUCO transfer who were given three-star designations by the 247Sports Composite. Athleticism and potential don't appear to be issues, but it's still difficult to imagine losing 17 starters and avoiding regression, even if your team was quite a bit worse than expected.

As UTSA's season began to crumble, rumors floated that Coker, at 66 years old, was pondering retirement. It would have made sense; 2014 wasn't going as planned, and there was not going to be a quick road back. But he's still aboard.

3. The offense dragged everything down

UTSA's offense ranked a healthy 58th in Off. S&P+ in 2013; the Roadrunners lacked in big-play capability, but dual-threat quarterback Eric Soza was an underrated efficiency weapon, and UTSA was able to stay ahead of the chains. Without Soza, UTSA still expected to lean on running back David Glasco II running behind college football's most experienced line.

Strangely enough, that tends to slow your offense down. And after a mediocre offensive start against decent defenses, UTSA's offense played as poorly as almost anyone's.

After scoring 37 against FAU, UTSA scored just 71 in seven games. The Roadrunners did rebound to play well against a bad North Texas defense, but the damage had long been done. An improved defense held on for a while but faltered down the stretch, allowing 5.5 yards per play and 34 points to an iffy UTEP offense, then allowing 7.4 and 45 points to WKU.

The seniors went out as winners against North Texas, but it was only the fourth win of the year. UTSA (and I) expected quite a few more than that. 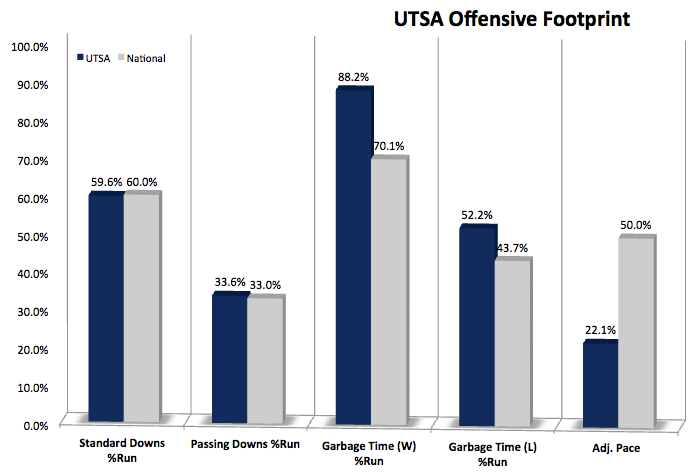 Carter went 22-for-33 for 228 yards against Arizona but got hurt against Oklahoma State and spent the rest of 2014 bouncing in and out of the lineup. Freshman Bogenschutz completed 10 of 16 against New Mexico and earned a start against FIU but almost immediately broke his hand. So redshirt freshman Austin Robinson filled in and completed 14 of 17 passes against FIU ... then threw two picks against Louisiana Tech and completed 14 of 36 passes against UTEP and Rice. Carter came back, got hurt, and came back again.

It was a big mess. And now that Carter is gone for good, it goes without saying that UTSA's quarterback situation is a mystery. But if you've got a giant question mark, you might as well have plenty of potential answers. And at every level of the offense, UTSA has flooded the system with options.

The mobile Robinson is back, as is Bogenschutz, who was granted a medical waiver after getting hurt so quickly. (That leads us to a fun situation: the first pass of Bogenschutz's redshirt freshman season will be the 40th of his career.) Walk-on Dalton Sturm, who finished second on the depth chart, returns as well. So the quarterback race was already going to be crowded before Bellomy announced he was transferring from Michigan and UTSA signed two intriguing true freshmen (Jaylon Henderson, Manny Harris).

Bogenschutz was the first choice last year when Carter went down, and I assume he's the favorite unless Bellomy shows more of his potential than he did in limited playing time at UM (career passing line: 4-for-23, 46 yards, four interceptions).

With such turnover at quarterback, none of 2014's primary returnees were able to generate momentum. Glasco II saw his per-carry average fall from 5.2 in 2013 to 3.8. Brandon Armstrong went from 8.1 to 4.2. And in the receiving corps, everybody's catch rates plummeted: Kam Jones went from 72 percent to 60, Marcellus Mack from 69 percent to 61, Kenny Harrison from 79 percent to 55. And now all five are gone.

In terms of production, none of these guys were irreplaceable, but they were still at the top of last year's depth chart. With them gone, UTSA will rely on bit players and newcomers. At running back, that means ample opportunity for junior Jarveon Williams, JUCO transfer Corbin White, and perhaps a freshman like Jess Anders or Brett Winnegan. At receiver, slot receiver Aaron Grubb is the closest thing to a returning go-to guy, and sophomore Kerry Thomas Jr., star JUCO recruit JaBryce Taylor, Oklahoma transfer Dannon Cavil and maybe a freshman or two will all get immediate opportunities.

Familiarity between whoever wins the starting quarterback job and his skill position corps will be minimal. We'll see how much that matters. From a pure athleticism standpoint, UTSA is bigger and faster.

When UTSA kicks off at Arizona on September 3, it will be the first game in program history with a starting center other than Nate Leonard. Leonard, Scott Inskeep, and Cody Harris all started for most of four seasons, and they are now all gone. So are the two other starters.

Two seniors -- William Cavanaugh and Jordan Gray -- have racked up starts through the years, so the cupboard isn't completely bare. But after those two, you dip into a pool of sophomores and newbies. (The system isn't quite as flooded here.)

In 2014, UTSA's offense showed how interrelated each unit of an offense is. UTSA's 2013 line ranked 43rd in Adj. Line Yards and 15th in Adj. Sack Rate, and returned all five starters last fall, but all it took was an iffy quarterback situation for the Roadrunners to fall to 119th and 78th. 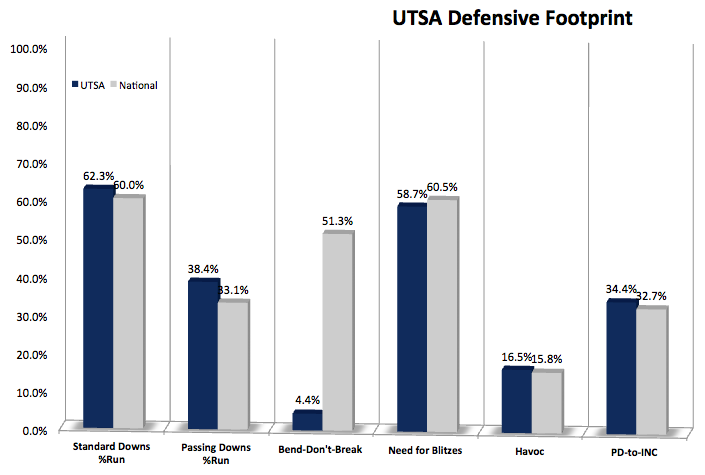 7. Keep blockers out of Douglas' way

The trench rebuild isn't limited to offense. Those responsible for 70 percent of last year's defensive line tackles are gone, including the top two ends and top three tackles. UTSA's defense was outstanding against the run, and the five departed seniors combined for 19 non-sack tackles for loss. Strength could become weakness.

The tackles' primary job was to keep blockers off of linebackers Jens Jeters and Drew Douglas, and they did that well. Douglas is back, but we'll see how much harder his job is this time around. If he has clear lanes to ball-carriers, he's proved he'll take them down.

8. Which newcomers step up?

The front six of Neal Neathery's defense was a clear strength; UTSA ranked 17th in Rushing S&P+ and 24th in Standard Downs S&P+ but ranked just 80th and 70th in Passing and Passing Downs S&P+, respectively.

The return of Jason Neill and Drew Douglas gives Neathery something to work with up front, but it's clear that the secondary will have to step up. And it will have to do so without ballhawking safety Triston Wade in the back. Wade had more interceptions (four) and nearly as many break-ups (10) as every DB returnee combined (three and 11).

But in Mauricio Sanchez and Michael Egwuagu, the Roadrunners do have a couple of active pieces around which to build. They also have corner Bennett Okotcha, who has been a starter for a good portion of his career. But you play three safeties and two corners, not two and one.

So who else steps up? Stanley Dye Jr. is a good bet; like Blake Bogenschutz, he played early before suffering an injury, and he seems to have plenty of potential. So do safeties Chase Dahlquist and Duke Wheeler, who each made a couple of plays behind the line of scrimmage. There are no JUCO answers, so Coker and his staff might have felt pretty good about this unit. They'll feel even better if a 247 three-star freshman like JaColbie Butler, Darryl Godfrey, or JaCorie Jones steps up quickly.

9. An impressive pair of legs gone

The senior attrition was not limited to offense and defense. UTSA must not only replace solid return man Kam Jones but also a strong place-kicker and kickoffs guy in Sean Ianno and a solid punter in Kristian Stern. Daniel Portillo might be fine with kicks, but special teams was a bright spot last year (28th overall), and it probably won't be this year.

From a pure athleticism standpoint, you can talk yourself into UTSA being pretty decent. The odds are good that a quarterback will emerge from what might be a six-man race, and between recruiting rankings and last year's averages, UTSA seems to have potential at running back, receiver, defensive end, and defensive back. There are major holes at defensive tackle and linebacker, and the secondary could get awfully thin and young with just one or two well-placed injuries. Still, the potential is there.

But it's really hard to get past "five returning starters," isn't it? Even if you count part-timers like William Cavanaugh, Jason Neill, and Bennett Okotcha, you only get up to about eight. And while UTSA has potential, so do plenty of other teams. Those other teams also probably return double digits in the starter column.

With a nice mix of transfers and three-star freshmen, Coker has positioned UTSA to be pretty good in 2016 and 2017. But I can't imagine his Roadrunners do much this fall, especially against a schedule that features only four teams that ranked worse than 90th in F/+ last year.

Win at UTEP, and maybe we'll talk, but for a program only recently built, this is a rebuilding year.

The big 2015 Conference USA football guide, from Charlotte to Marshall