What would actually happen in a 68-team college football tournament?

We know what this year's bracket could look like, but what changes could we expect on the field?

Share All sharing options for: What would actually happen in a 68-team college football tournament?

Because bowls are as entrenched in college football as lobbyists are in Washington, the sport's highest level was long unable to build any kind of playoff system. In 2015, for the first time since the bowl was conceived of in 1902, college football had a top-division playoff.

The results varied from surprising to not that shocking. Alabama lost, Florida State's luck ran out, Urban Meyer dominated at the head of a traditional power, and a third-string QB was the hero. It was typical of what we see when college athletes are pitted against each other in single-elimination tournaments.

1. Big upsets would happen here, too

And not just in matchups like 10-seed FCS dynasty North Dakota State vs. 7-seed Nebraska, which almost lost to McNeese State.

College football has seen FCS championship-level teams work over AQ teams, and there'd be potential for this in the early rounds. For instance, a power offense like NDSU's would have little trouble against many FBS defenses designed to handle speedy spread teams, which can lack the bodies up front to withstand poundings.

Ultimately, FCS teams would be done in by their lack of speed, probably before the Sweet 16. But top mid-majors like Boise State or UCF, who don't have the scholarship disadvantages of FCS schools, would sometimes advance to prime rounds.

Recruiting rankings sell well and are one of the better long-term predictive tools, but just as in basketball, the number of transcendent athletes who are truly head-and-shoulders above their peers is fewer than commonly believed. Most prospects are as much at the mercy of chance and context as anyone else, and programs that can load 85 scholarship spots with even lower-ranked recruits can still end up with deep rosters.

While the champions would almost always be the major programs, there's nothing about football that makes favorites less vulnerable to upsets. If it can happen in the sport where the best teams pull from one of the planet's most specific population pools -- elite athletes who are also especially tall -- it can happen in football. 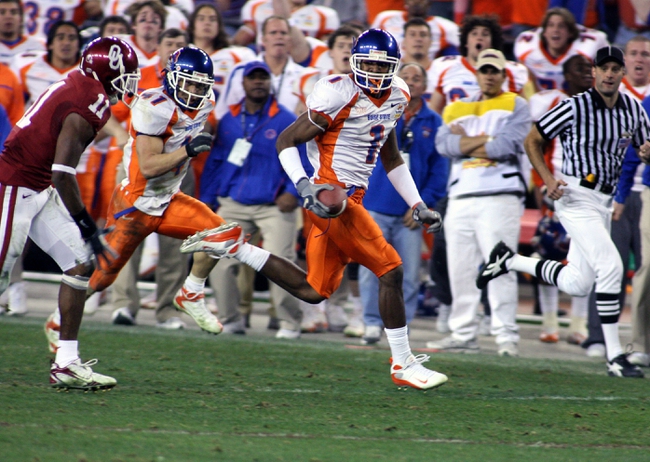 2. Injuries would have major impacts

The greatest challenge to the upset-minded mid-major would be having to play multiple games against top-level competition without the same level of depth.

Most teams, be they in the SEC or the Sun Belt, are comprised of role players alongside a few key stars. These will be at the mercy of injury luck, as a knockout blow to a middle linebacker, best cover corner, or dual-threat TE could unravel an entire system.

Many teams ask their quarterbacks to carry heavy loads, such as Oregon or Florida State in 2014. An injury to Marcus Mariota or Jameis Winston in a tournament would have spelled disaster for either. Ohio State's survival of similar issues was historically unique.

Football is more violent than basketball. A 68-team tournament would inevitably see contenders fall by the wayside due to injuries. While the loss of a single starter in basketball might be more difficult to overcome, those losses would occur much more frequently in football.

Imagine if Ole Miss receiver Laquon Treadwell's injury had occurred in a tournament and had not been ruled a fumble, resulting in a Rebels victory. It would have been difficult for the coaching staff in such a situation to restructure the offense around different players, rally the troops, and gameplan for an even tougher opponent in time to overcome the blow. In the 2014 season, Ole Miss had three weeks to prepare for its next tough game, a 30-point loss to Arkansas, but in our bracket, the Rebels could immediately enter Clemson or Ohio State week while dealing with the injury.

The Big Ten and Pac-12 are dominating this list right now.

Picking the 2015 bracket based on football

Now that there's a bracket, let's change the sport.

Basketball teams get bounced without guards who can control tempo and endure pressure. The same would be true of teams without veteran QBs.

It's hard enough for these players to survive conference slates of familiar opponents. Imagine a freshman QB thrust into a tournament in which he faces a unique Tampa 2-style D one week, then a blitz-heavy 3-4/4-3 hybrid that doesn't exist in his conference the next.

Imagine rooting for a powerhouse squad with tremendous team talent and QB issues, like 2011 LSU, going into a game against an aggressive mid-major with a veteran secondary. If fans of big programs weren't secretly terrified of a shameful loss followed by weeks of Internet abuse from rivals, they would be after seeing other giants get taken down due to young QBs making errors.

* Teams that are run-centric and built around more straightforward QB reads, like Ohio State, would fare better.

It's one thing to assemble talent and install the right systems to dominate a region. It's something else to be able to adjust for unfamiliar opponents on short notice.

A program like Art Briles' Baylor might mirror Jim Boeheim's Syracuse. They run schemes that allow them to max out 'tweeners and specific types of athletes. They challenge what normal college teams are prepared to do.

Boeheim recruits length and takes away easier buckets with his 2-3 zone. Briles spaces out opponents, pushes the pace, and hammers with endless deep shots. Winning in the Big Ten rarely requires a defense to stop an attack like Briles', so Michigan State was at wit's end trying to adjust in the Cotton Bowl, ultimately prevailing by a thin margin. The Bears' system makes them a difficult draw, but the adjustments by the Spartans' staff suggest skills that would translate to a tournament setting.

Would coaches at major programs remain fixed to pro-style systems if it meant being outscored by spread teams that jumped out to early leads?

Would spread teams be able to control tempo well enough to win shootouts in succession, or would the up-tempo style make them vulnerable to late-game swings?

How would Georgia Tech opponents handle the flexbone option attack without extra time to prepare? Would that advantage be enough to push Paul Johnson's teams deep?

5. How we evaluate coaches and players would change

As much as fans enjoy conference titles and big bowl games, postseason success would rise in importance. So what if you won the Pac-12 again? You also failed to reach the Elite Eight again!

Will anyone care who won the Big 12 regular season title in basketball? Oklahoma and West Virginia fans are more likely to feel good about their Sweet 16 than Kansas fans are about their conference title.

Even casual fans recall how far each team advanced when every eye was tuned in. In terms of bragging rights over rivals, advancing deeper in the tournament would typically rate higher than winning a "better" bowl game.

Conference races might become devalued, little more than a means to obtain higher seeds, freeing up coaches to pursue strategies that might cost a game here or there but better prepare for tournament success. Coaches might rest a starting QB against a weaker opponent or take bigger risks like refusing to punt, in accordance with mathematical principles.

Player legacies would change. Awards such as All-America teams and the Heisman might have to (finally) move after the postseason, especially since college football would have to shorten the season anyway.

The demands of a 68-team tournament would be too intense for the sport. The loss of revenue control for the bowls and major programs would be a major barrier to making the sport so inclusive for smaller schools.

But perhaps the current Playoff model will continue to expand. If March Madness tells us anything, it's that college football would look much the same, only more so.