The 128-team countdown reaches a program that you never would've thought of as a steady winner, but things change.

David Bailiff enjoys himself. I'm not sure there's an angry picture of him in existence, at least when he's standing on a football field. They're all relaxed, jovial, or fired up. Case in point: 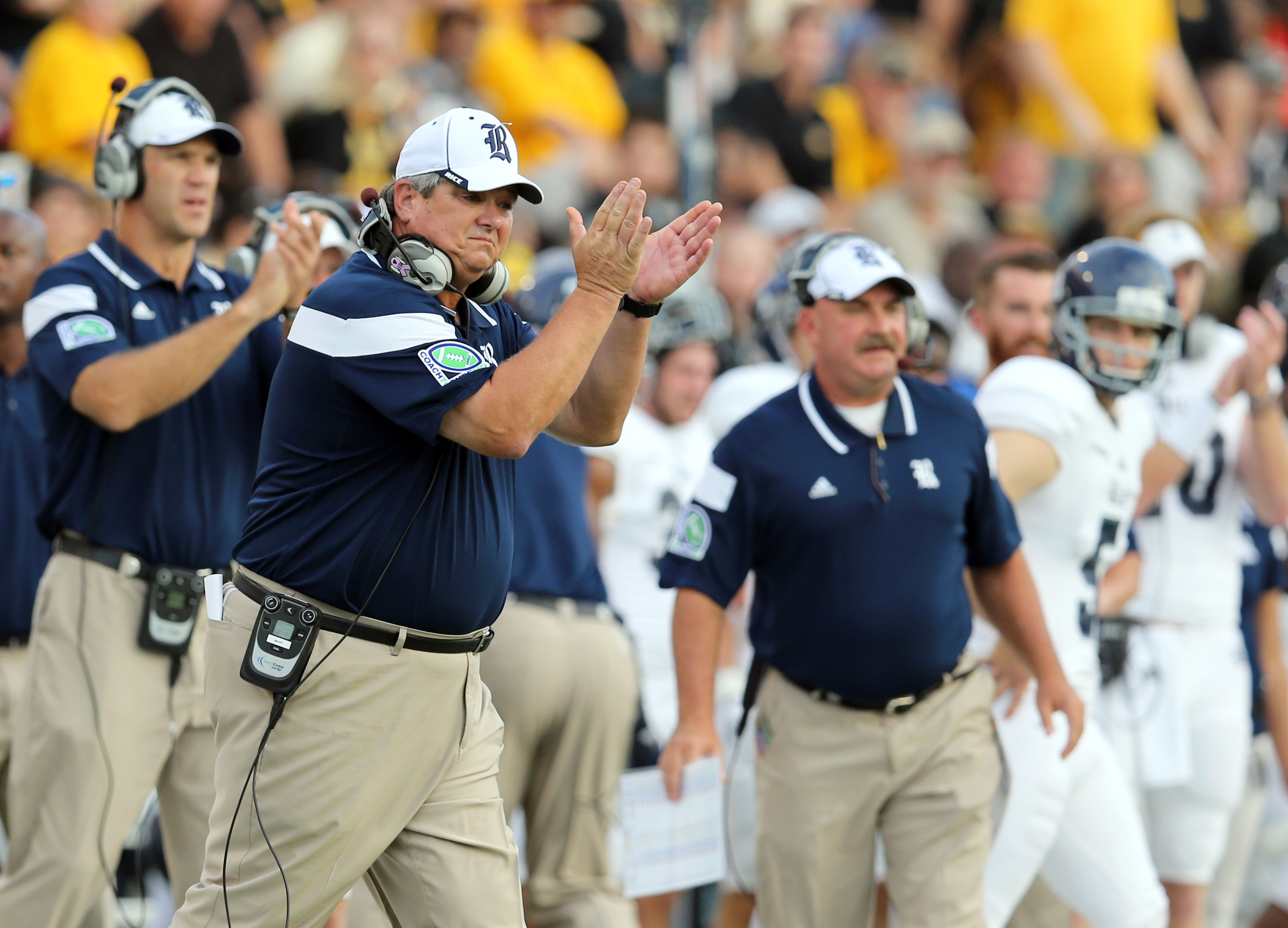 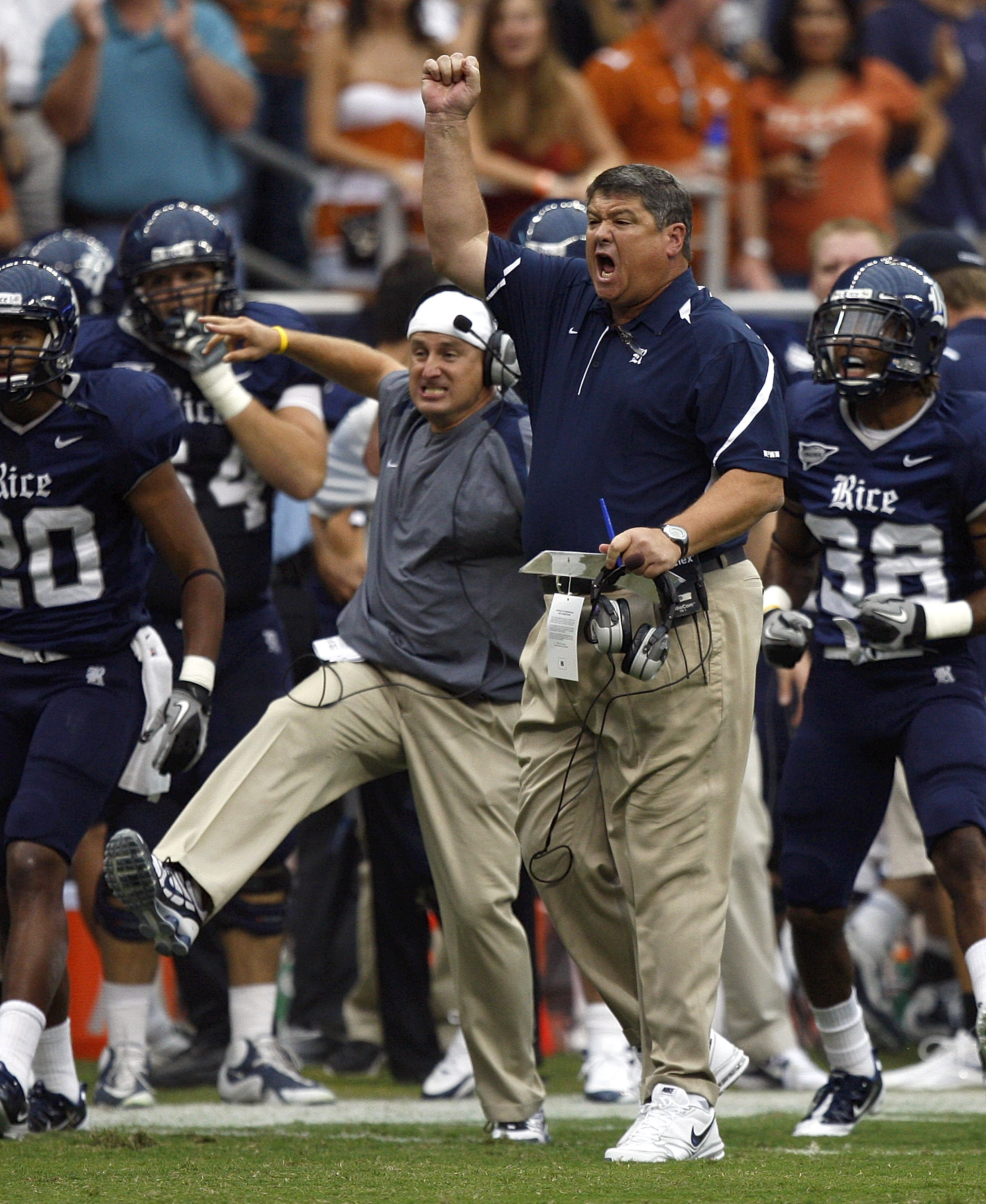 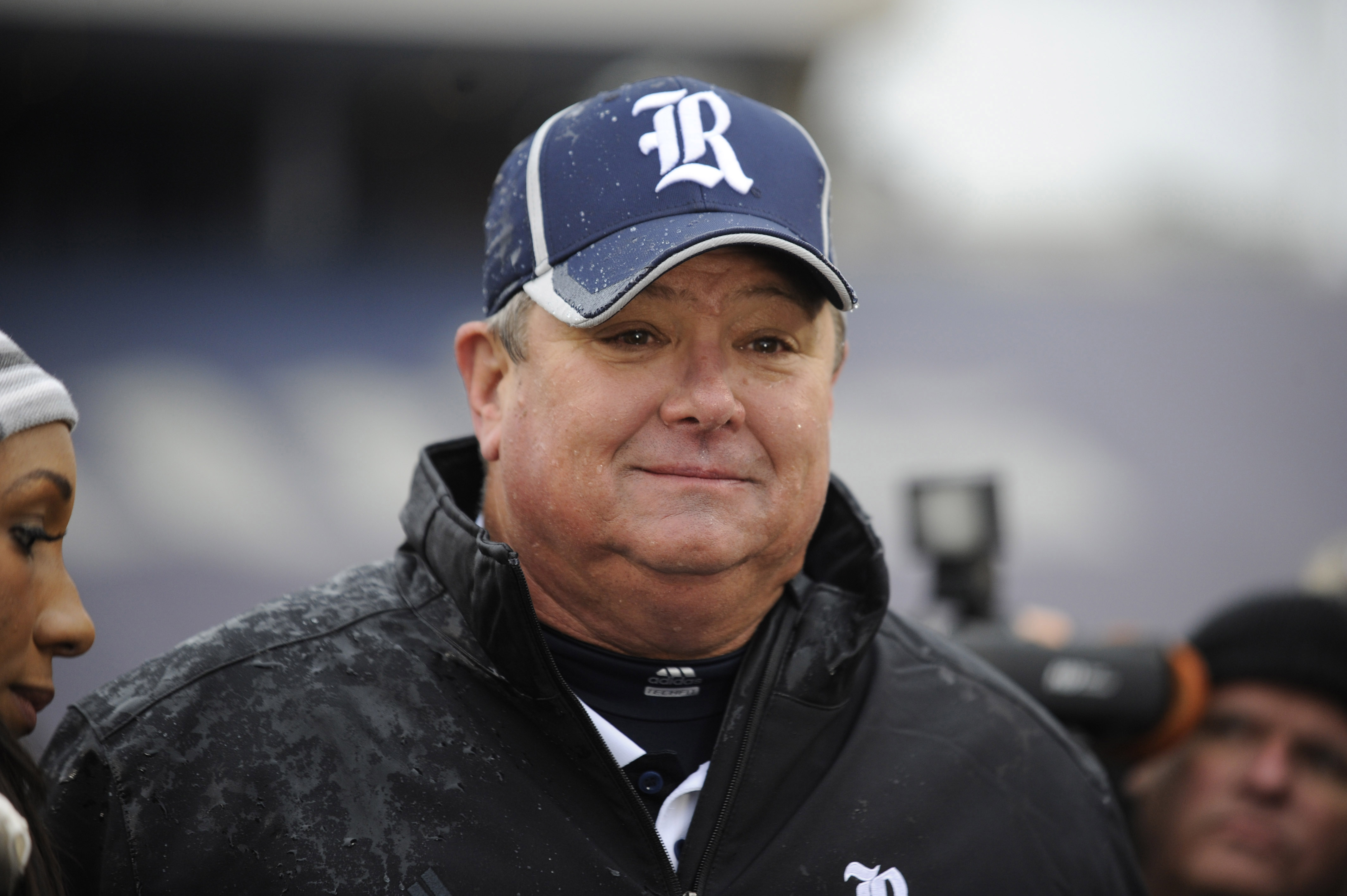 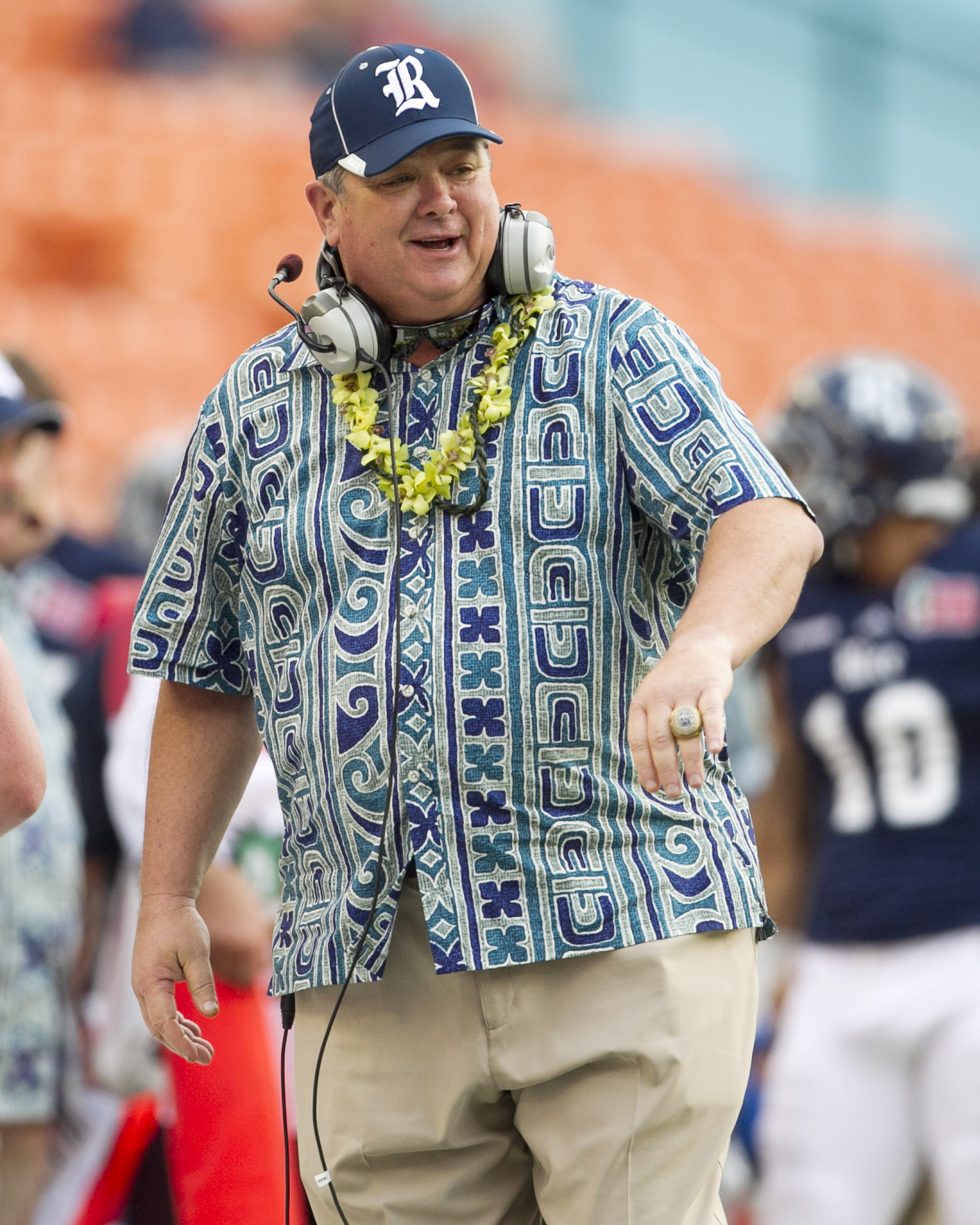 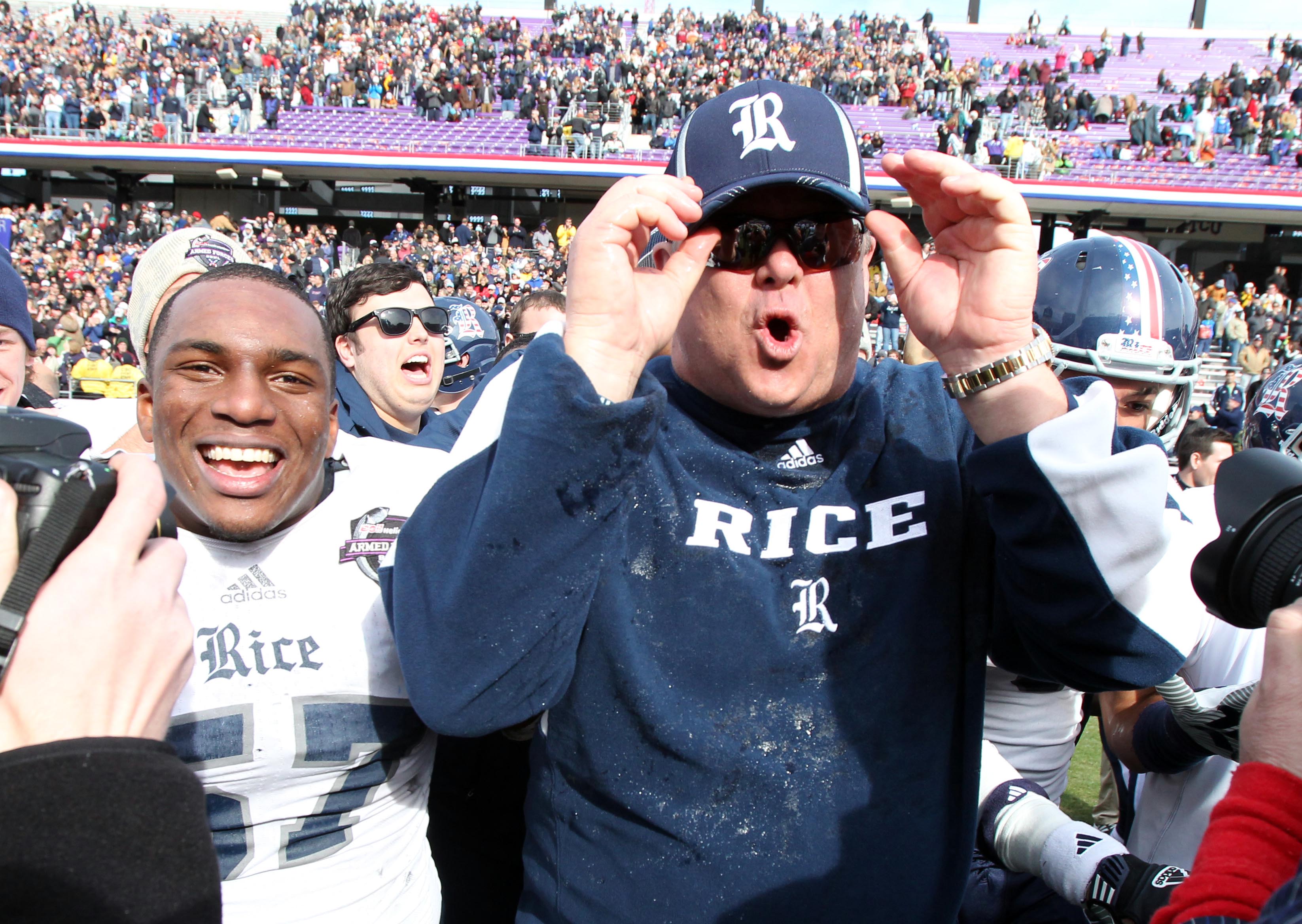 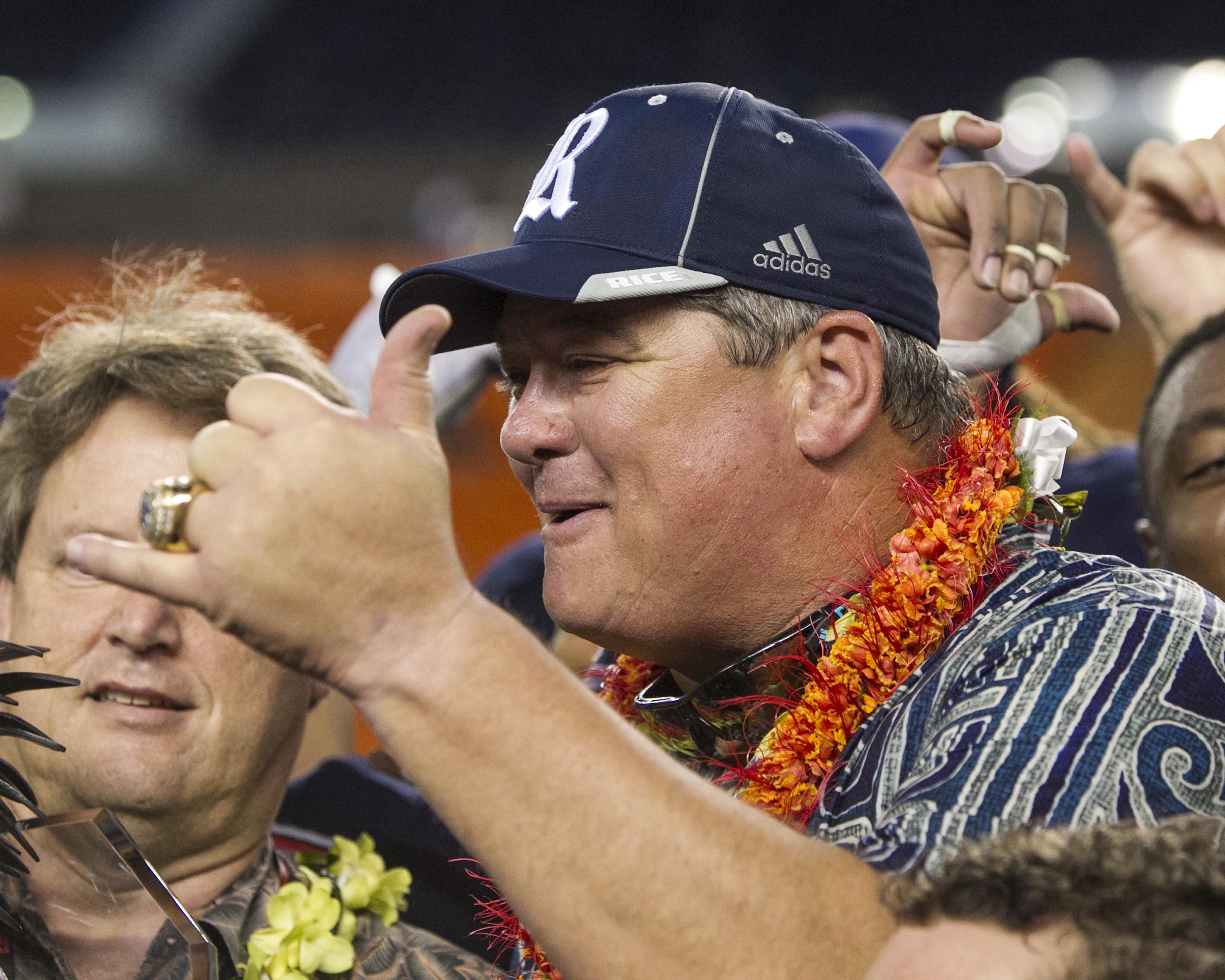 Biggest strength: Quarterback Driphus Jackson is asked to do a ton and pulls it off

Biggest question mark: The defense is undergoing quite a rebuild

In one sentence: Bailiff's Owls have to replace a ton from an aggressive defense, but with Jackson and an experienced skill corps, they could make themselves West favorites if they beat Louisiana Tech.

Bailiff has been coaching since almost the moment he graduated from Southwest Texas State in 1981. He became a branch on Dennis Franchione's tree in 1990, became Gary Patterson's defensive coordinator at TCU when Franchione left for Alabama, and became a head coach in 2004, leading his alma mater for three seasons before taking over at Rice in 2007. The 56-year-old has lived pretty good to date.

Since losing, 28-24, to eventual Conference USA champion Tulsa in 2012, Rice is 24-9. The Owls won the final five games of 2012, eking out bowl eligibility and thumping Air Force. They then thumped Marshall to win Conference USA in 2013, and after losing offensive difference-makers, they began 2014 0-3 and finished 8-2 with a bowl romp over Fresno State.

Bailiff teams finish strong. They click in November, and they bowl in December. Rice has attended as many bowls under Bailiff (four) as it had in the 53 years before he arrived and has won as many bowls as it had in the previous 69. This isn't a powerhouse program, but it is turning into one of Conference USA's safest bets.

Rice! A steady winner! In football! The school is investing in football, and if Louisiana Tech's defense regresses more than Rice's, Bailiff's Owls might have a shot at another conference title.

Rice is the third straight team we've previewed, joining UTEP and MTSU, that saved its best performances for its worst opponents and got pummeled by the good ones.

The offense was strangely consistent -- 5.6 yards per play against Notre Dame, 5.6 against Southern Miss, 5.9 against North Texas, 5.2 against Louisiana Tech -- but the defense wasn't capable of slowing down strong offensive attacks. The Owls played five offenses in the Off. S&P+ top 60 and eight that ranked worse than 85th. The difference was stark.

Now, you expect a defense to do better against bad offenses, but these numbers go well beyond that. If Rice could craft an athleticism advantage on defense, the Owls completely dominated. But against offenses with a pulse, they were doomed. They held Hawaii, North Texas, FIU, and Fresno State all under four yards per play, but they couldn't keep Notre Dame and Louisiana Tech under nine per play. That's startling.

That an athleticism advantage was important is a scary thing because most of Rice's most athletic defenders are gone: ends Brian Nordstrom and Zach Patt (combined: 31 tackles for loss, 17 sacks), tackles Dylan Klare and Christian Covington, linebacker James Radcliffe, corner Bryce Callahan, safeties Jaylon Finner and Julius White. The defense is rebuilding, and it already had some question marks. 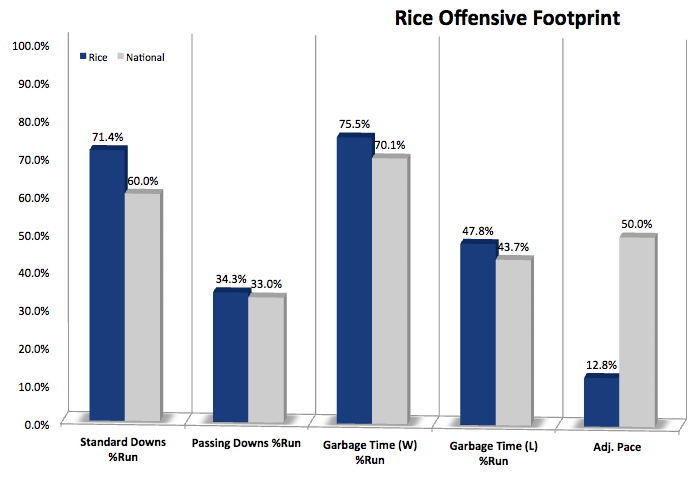 Bailiff has lost offensive assistants (usually to bigger jobs), but his offense's philosophy has remained similar: run a lot on standard downs, run a lot on passing downs.

In 2012, with Taylor McHargue at quarterback, the Owls ran 3 percent more than the national average on standard downs and 13 percent more on passing downs. In 2013, it was 9 percent and 14 percent.

But after a two-year internship, Driphus Jackson took over, and with new offensive co-coordinators (veteran Bailiff assistants Larry Edmondson and Billy Lynch), the Owls ran more than ever on standard downs (71 percent, 11 percent above the average) but threw far more on second- or third-and-long.

With Jackson's mobility serving as a threat on the boundaries, Edmondson and Lynch asked him to make plays, and he did. The run game wasn't particularly strong -- leading rushers Jowan Davis and Darik Dillard combined to average 4.2 yards with almost no huge plays -- and Rice ranked just 96th in Standard Downs S&P+. But they ranked 21st on passing downs thanks to Jackson's play-making ability and a foursome of exciting receivers.

Jackson takes a lot of sacks, as do most mobile, get-him-on-the-perimeter QBs. But he makes smart decisions with the ball, he doesn't fumble, and he keeps Rice ahead of the chains. Watching him develop, from a star turn in the 2012 Armed Forces Bowl to another dominant performance against Fresno State in Hawaii, has been a lot of fun. He's tough (he separated his non-throwing shoulder against ODU, popped it back in, and kept playing), and he's ready for a big year, at least as long as a new big-play threat can emerge.

Last year's backfield returns intact, from Jackson to every primary running back. The offensive line might be a question mark, as it must replace three starters, but there are juniors, seniors, and some former three-star recruits (sophomore Kenneth Thompson, for instance) ready to fill in.

In terms of returning personnel, there's no reason to think Rice won't still be run-heavy on first down. But I'm curious about the ball distribution.

Bailiff and his staff are confident enough in these backs that they are tinkering with new positions for a pair of three-star redshirt freshmen (Austin Walter is apparently moving to slot receiver, and his twin brother Aston is trying out at cornerback), but is there a go-to guy? And while Jackson is awesome on passing downs, can the run game prevent him from having to do quite as much?

5. The big-play guys are gone

The line is the biggest question, but replacing Jordan Taylor and Mario Hull won't be the easiest thing in the world. Dennis Parks and Zach Wright were solid possession receivers, but at a combined 17.0 yards per catch, Taylor and Hull were the big-play guys.

James Mayden made an impression in limited opportunities -- he caught only seven passes, but three went for 53, 81, and 69 yards -- and going by 247Sports Composite ratings, there are a few different three-star options here. Odds are good that Jackson will have the weapons, but that's not 100 percent. 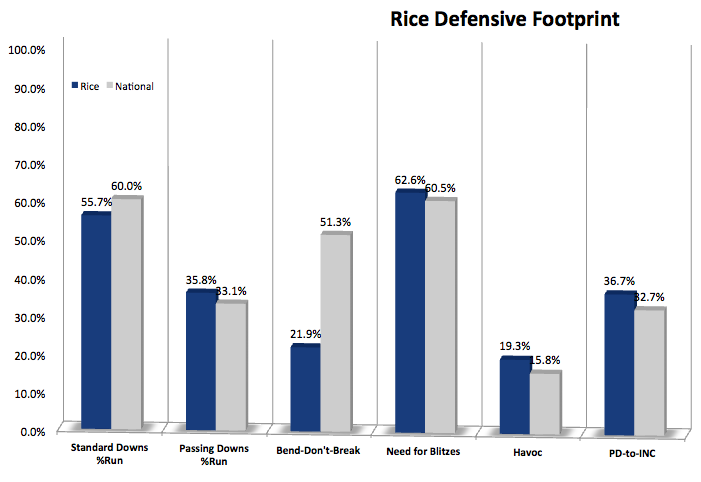 Rice was great against bad offenses and horrific against good ones, but no matter what, the Owls' aggression forced opponents to change the script. Rice attacked the run enough on standard downs that opponents chose to pass 44 percent of the time, 4 percent more than the national average. On passing downs, Rice went after the quarterback enough that opponents ran 3 percent more than average.

Opponents had to counterpunch to find success. That worked out just fine for some, but most Conference USA offenses struggled to cope.

Bailiff and defensive coordinator Chris Thurmond might have to play it more conservatively. They no longer have a spectacular pass-rushing duo, defensive tackle depth, or experience in the secondary. It will be interesting to see if they change their level of aggression, or if they start by attacking as much, then making adjustments as results dictate.

7. Starting from scratch on the pass rush

Nordstrom and Patt were one of the best mid-major pass-rush combinations in the country, Dylan Klare added five sacks from the tackle position, and while he missed half of 2014, Christian Covington still declared for the NFL Draft after dominating in 2013. Plus, linebacker James Radcliffe, perhaps Rice's best run defender (6.5 non-sack tackles for loss), graduated.

To say the least, that's a lot to lose, especially considering how important the line was for Rice's identity.

As with the receiving corps, there are some exciting new options, but they still have to prove themselves. Sophomore end Graysen Schantz and senior Grant Peterson combined for 26.5 tackles as backups, but 10 were behind the line, and they forced three fumbles. Tackles Trey Martin and Ross Winship saw playing time and made a few plays in Covington's absence, and 2013 starter Stuart Mouchantaf returns after missing 2014 with injury. Plus, three of the most highly touted incoming freshmen are linemen.

There are enough exciting underclassmen to assume good things in 2016, or maybe even the second half of 2015, but a slow start is a distinct possibility.

8. Really starting from scratch in the secondary

Operating from a Gary Patterson-style 4-2-5 defense and generating a hell of a pass rush without blitzing, Rice was able to use its safeties aggressively. Jaylon Finner, Gabe Baker, Julius White, and Malcolm Hill combined for 9.5 tackles for loss and 20 passes defensed, and cornerback Bryce Callahan pitched in with four and nine, respectively. They're all gone.

Corner Ryan Pollard does return, and three-star sophomore Cole Thomas hinted at play-making ability in a reserve role. (I'm using words like "hinted" and "potential" a lot, aren't I?) Destri White was a three-star 247 recruit, and redshirt freshmen Aston Walter and J.T. Ibe have mounds of athleticism.

But again, five of last year's top six are gone, and the new guys won't benefit from the same level of pass rush. And in the first five games of the season, Rice will have to face both Baylor's and Western Kentucky's offenses.

There aren't many good offenses in Conference USA, and after the midway point, Rice will find the level of competition much more to its liking. I do figure this will be a decent November defense, one that will have as much athleticism as any recent Rice D, but there will be growing pains. And Baylor and WKU might combine for 110 points.

Rice wasn't great or terrible, but in James Farrimond, it does appear the Owls have a decent punter and a place-kicker who's automatic inside 40 yards. Farrimond was only 1-for-4 on longer kicks, but he didn't miss a shorter one. You can work with that.

And if Farrimond improves his punting numbers and anybody from a large crop of speedy freshmen or redshirt freshmen emerges as a return threat, Rice could see much more favorable field position.

10. Life as a proven entity

The mind pretty quickly adapts to a new reality. That can be good or bad. I'm thinking of Rice as a potential West favorite despite the fact that it is replacing two big-play receivers, three offensive line starters, four disruptive defensive linemen, and almost its entire secondary. But if a less-proven team like FAU or UTEP were to lose the same amount, we might be predicting a mini-collapse.

We're probably going to be right, though. There aren't enough offenses good enough to take total advantage of Rice's vulnerable defense, and some teams with potentially strong Os (FAU, Charlotte) have all sorts of defensive questions. Plus, while so much of the conference is looking to rebound from an awful offensive season or break in a new quarterback, Rice has Jackson and an experienced skill corps. Though he's only started for one season, Jackson is one of the conference's most proven entities, especially considering the amount he was asked to shoulder last year.

Louisiana Tech is probably the favorite in the West, but Rice gets probably its two toughest conference opponents at home (WKU, La. Tech), and if the Owls improve as they typically do, they could again cruise through November and hammer a fellow mid-major in Hawaii or Albuquerque. (Insert stock photo of David Bailiff grinning and wearing a lei here.)

Assuming success from Rice might still feel strange for anybody who paid attention to college football between about 1965 and 2005, but here we are.

The big 2015 Conference USA football guide, from Charlotte to Marshall