The big 2015 Miami (Ohio) football guide: The right guy for a long rebuild

The 128-team countdown turns to the Cradle of Coaches, which looks to have found another good one.

Share All sharing options for: The big 2015 Miami (Ohio) football guide: The right guy for a long rebuild

Perhaps no team has seen its on-paper quality and win total match less than Miami (Ohio) in recent years, and for the most part, close games are to blame. 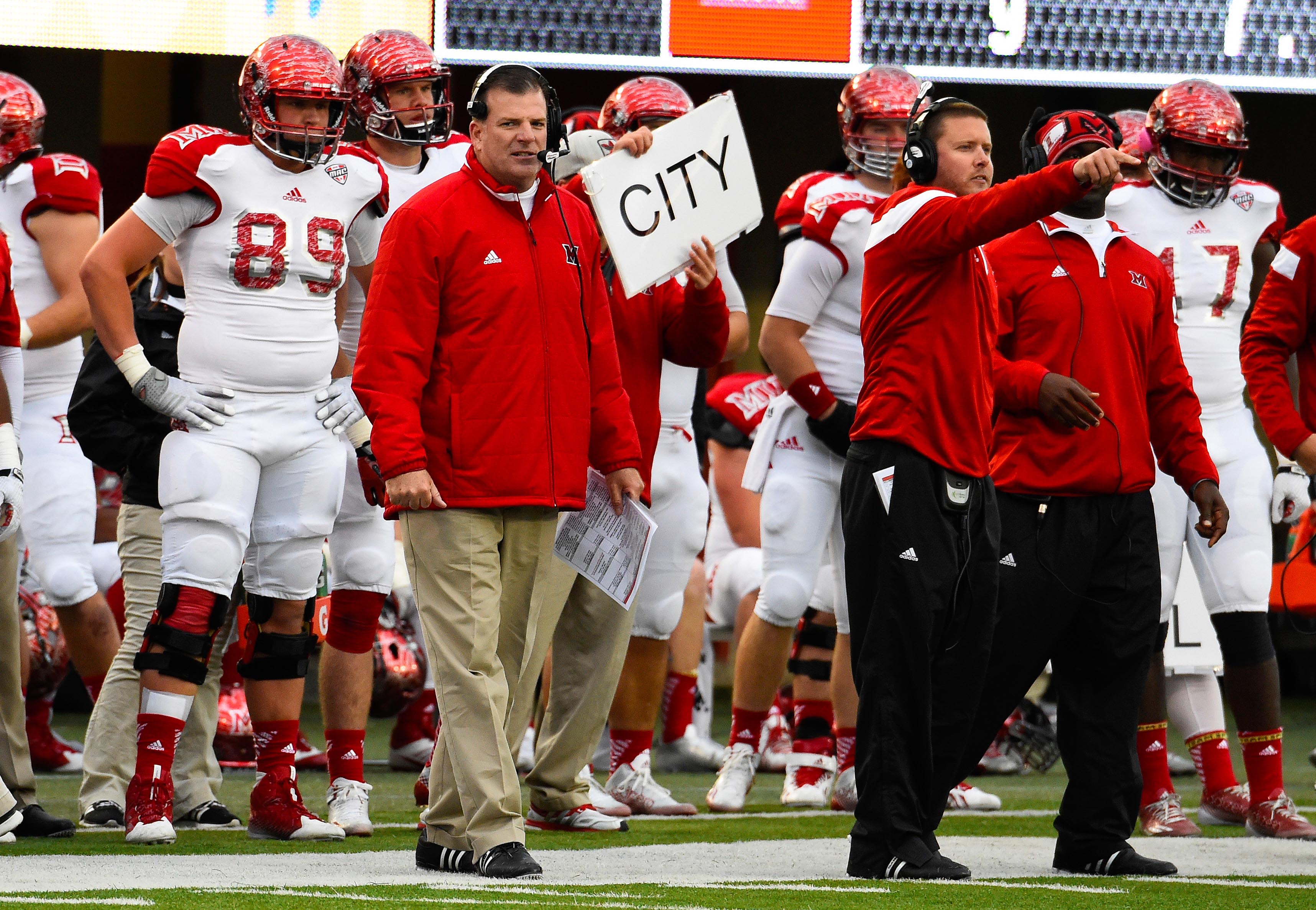 In one sentence: Miami was better than you thought, but turnover on offense will probably prevent a second straight step forward under Chuck Martin.

In 2010, Miami improved a bit to 94th in F/+ but saw the win total improve by an incredible nine games because of a 6-0 record in games decided by one possession (and a 1-4 record in games decided by at least 21 points). This close-game good fortune resulted in Haywood getting hired away (briefly) by Pitt. In 2011, Don Treadwell took over, and Miami's rating improved to a healthy 72nd ... as its record crumbled to 4-8. The Redhawks suffered four one-possession losses, three to teams that won at least seven games.

In 2014, however, we saw the return of weird, confusing Miami.

Former Notre Dame offensive coordinator Chuck Martin took over. Miami improved 19 spots, to 103rd, in F/+. You can win in the MAC by hovering around No. 100, but Martin's Redhawks went 2-5 in one-possession games. They played three teams that won at least nine games in 2014 (Marshall, Cincinnati, and NIU) and lost by just a combined 32 points but finished just 2-10.

Two wins is tangible improvement over zero, but the record didn't fill you in on how much of Miami's house Martin began to get in order. This team was close to something better. After all, I'm writing these previews in ascending order based on last year's F/+ rankings, and I've already done Ohio and Akron, which combined to go 11-13.

The bad news: the Redhawks' offense has to be rebuilt, and if you've been reading these MAC previews, you're seeing that quite a few teams were young last year and can be expected to improve.

It's a little bit crowded in the middle, and we'll see what the Redhawks can do to stand out.

2. Happy in the middle

In the first year of a rebuild, you're just trying to catch glimpses. A team that went 0-12 the year before isn't likely to experience any sort of sustained breakthrough. (Granted, Miami had gone from 1-11 to 10-4 less than five years earlier, but that's about as much of an outlier as you're going to find.)

The beginning was bumpy -- that's the nice way of putting "they lost to Eastern Kentucky" -- but from the fourth to 10th games of the year, the Redhawks found something.

In terms of yardage, Miami was nearly even with Cincinnati on September 20 (370-364), and the Redhawks actually outgained Akron in a 10-point loss. The results weren't amazing, but Miami was putting up yards and points (a combined 1,071 and 83, respectively, against UMass and NIU) and showing occasional hints of encouraging defensive play (Akron and Kent State: 603 combined yards and 32 combined points). And after a dud against WMU, the CMU and Ohio performances were at nearly the same standard.

Miami may not have been good, but the Redhawks weren't bad either. 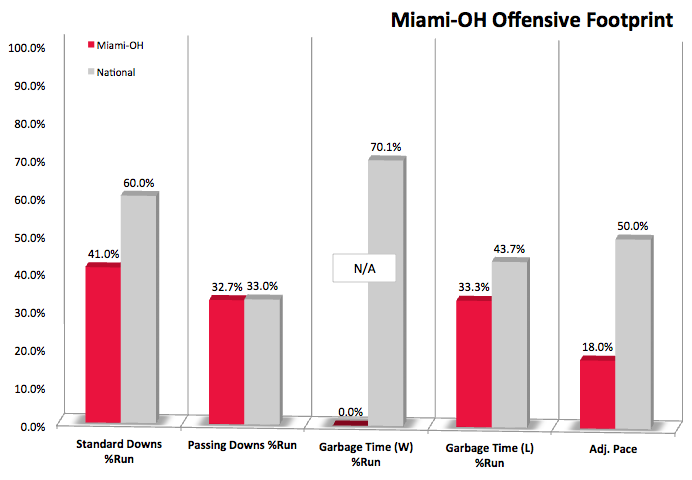 3. Bailed out by big plays

The Redhawks were a little too reliant on big plays, however. Down-to-down consistency was nowhere to be found, either via run (3.4 yards per carry on first down) or pass (48 percent completion rate), and the result was plenty of second-and-longs and three-and-outs. And as you see above, when Miami needed yards in the fourth quarter, they were rarely anywhere to be found.

Still ... big plays are good! Consistency is a necessity, but Miami's top four wideouts each averaged at least 14.3 yards per catch, and tight end Alex Welch (15.4 yards per catch over the last eight games) had his moments.

Martin handed the quarterbacking reins to Notre Dame transfer Andrew Hendrix, but he was only around for one season. We'll find out if the inefficiency was a feature of the system or a particular aspect of Hendrix's quarterbacking personality.

4. Plenty of candidates behind center

Martin and Hendrix had already worked together for quite a while in South Bend, so Hendrix's transfer bought Martin some time in terms of quarterback development. In 2015, the cushion is gone.

Scheduled to return are basically the same names Martin was looking at a year ago: Drew Kummer, mobile Austin Gearing, and young Tom Tupa. Martin signed a potential keeper in incoming three-star Billy Bahl, but Kummer and Gearing both have experience that might be hard to overcome.

Not all experience is good experience. Kummer has completed 22 of 58 passes for 320 yards and six sacks. Gearing (who missed 2014 with injury) proved relatively mobile late in 2013, but his actual quarterbacking was horrific: 44 percent completion rate, 23 percent sack rate, 1.2 yards per pass attempt. Neither has proven particularly efficient, and Tupa hasn't had a chance to prove anything.

So yeah, maybe Bahl has a chance.

Whoever wins the job will be facing long odds to avoid must-pass situations. Dawan Scott, a receiver who played running back in 2014, has graduated, leaving behind a set of running backs who averaged just 3.7 yards per carry. Plus, the line must replace three two-year starters from a unit that didn't generate much of a push but kept defenders out of the backfield. Martin signed a fantastic set of linemen, but the only thing as challenging as relying on a freshman quarterback is relying on freshman blockers.

Evidence suggests more second-and-longs in Miami's future. But the Redhawks might have the receiving corps to bail themselves out.

Miami's offense was one of ball distribution. There may not have been efficiency, but there was variety.

If you include Hendrix and his 9.5 non-sack carries per game, six Redhawks had at least 75 intended touches (rushes plus targets) in 2014: Hendrix (114 for 637), wideout David Frazier (110 for 949), Dawan Scott (103 for 553), Rokeem Williams (86 for 686), Jared Murphy (83 for 628), and Spencer McInnis (77 for 345). The top three players there are now gone, but in Williams, Murphy, and sophomore Sam Martin, Miami does still have a trio of explosive receivers. And if you believe recruiting rankings, reinforcements are on the way: sophomore back Paul Moses, freshman backs Leonard Ross and Maurice Thomas, and freshman receiver James Gardner were all deemed three-star athletes by either Rivals or the 247Sports Composite.

The athleticism is exciting, but there was athleticism last year. The next step in Miami's offensive development will be geared around efficiency, and with so many new players taking on larger roles, it's hard to imagine that efficiency coming in 2015. 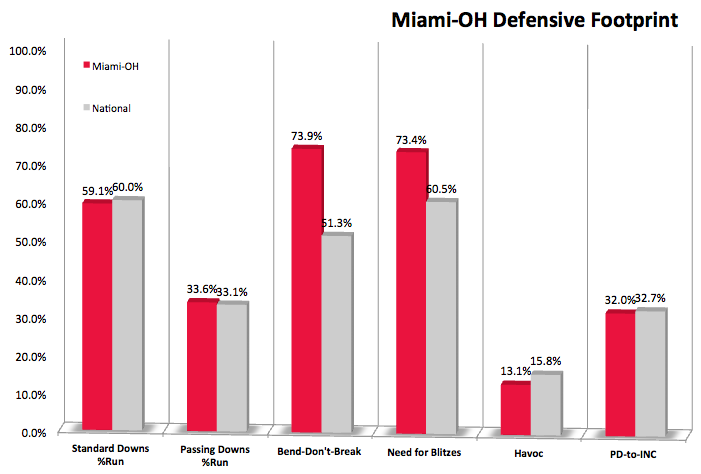 6. The 2015 class was awfully impressive

Chuck Martin did what he could in putting together his 2014 recruiting class, but from a rankings perspective, the results were sketchy: the class ranked 117th via Rivals and 123rd via the 247Sports Composite.

Given a year to sign his first full class, he proved what he could do. Miami's 2015 class ranked 81st via the Composite and 84th via Rivals, second and third in the MAC, respectively. Even with the absurd job that WMU's P.J. Fleck is doing in this department, Martin is challenging more established programs like NIU, Toledo, and BGSU for second-place superiority.

Within a couple of years, the effects could be felt in the trenches. Per the Composite, Martin signed three three-star offensive linemen and four three-star defensive linemen (three ends, one tackle). The OLs might have to get their feet wet before they're ready, but there's a pretty exciting pipeline forming at the end position, where Bryson Albright and J'Terius Jones (combined: 11 sacks in 2014) return.

Miami had serious size deficiencies in 2014, and while freshman tackle Nate Trawick is big, the 2015 class isn't going to immediately solve those problems. But in the absence of size, Miami was occasionally able to beat opponents with speed, and they'll have even more of it.

It appears Burris and Tucker are scheduled to return, as are eight starters and most backups. Talent could still be an issue, but Pawlowski has more depth and experience. So if the early-game struggles remain, eyes might start pointing toward the coach instead of the depth chart.

8. More beef (and bodies) up front

[O]pponents were still allowed to gain six yards anytime they wanted to. Despite six RedHawks racking up at least four tackles for loss each, Miami still had some of the worst success rates in the country, and a majority of the damage was done up front. Miami ranked dead last in Adj. Line Yards and second-to-last in Opportunity Rate.

Returning ends Bryson Albright and J'Terius Brown combined for a rock-solid 17.5 tackles for loss but were the size of outside linebackers, averaging 233 pounds. The top three returning tackles, meanwhile, average 275. Size isn't everything, but there is still a minimum threshold, and Miami didn't meet it.

The rush defense numbers improved in 2014, but only marginally so: from 124th in Rushing S&P+ to 113th, and from 126th in Adj. Line Yards to 118th. Miami was again strangely effective in short-yardage situations, but opponents still found plenty of open-field opportunities. Though the success rates improved a bit, Miami's big-play prevention capabilities suffered in the absence of Brison Burris and 2013 star corner Dayonne Nunley.

In 2015, experience will be an ally, and size at least won't be an enemy. Now let's find out about talent. And health.

9. The most interesting kicker in the world

Miami's special teams unit was almost guaranteed to stumble without the services of booming punter Zac Murphy, who graduated after 2013. And sure enough, the Redhawks fell from 44th in special teams efficiency to 97th.

But if you're going to be bad, you may as well be unstable -- it adds entertainment value. And in Kaleb Patterson, Miami had one of the least stable legs in the country. Patterson was 4-for-4 on field goals longer than 40 yards (he was 5-for-8 in 2013, too) but 5-for-9 on shorter kicks. So he had a cannon he couldn't really control? Not necessarily. Only 13 percent of his kickoffs resulted in touchbacks. And while opponents' kick returns weren't consistently impressive (the average return was only 19.8 yards), the big returns were huge: Miami was one of only nine FBS teams to allow more than one kick return touchdown.

Fred McRae appears to be a decent return man, and Christian Koch could be worse at punter, but Patterson might be the best and worst player in this unit.

Though the Redhawks improved more than you realized in 2014, I don't see a similar jump in 2015. A deeper, potentially healthier defense could take a nice step forward, but that might be offset by a less-experienced offense that maintains both its big-play potential and total inefficiency.

If the Redhawks land again in the No. 100-110 range, their fortunes will be tied to how they far in close games. They face seven teams that ranked 105th or worse in F/+ last year -- including two on the road (Kent State, Ohio) to begin conference play -- and five that ranked better than 70th, so if they do well in the close ones, they could threaten to creep toward .500 for the first time in five years.

And if they again lose the close ones, they'll be lucky to go better than 3-9.

Miami is one of the most storied programs in the MAC, the self-proclaimed Cradle of Coaches that employed everybody from Paul Brown, Woody Hayes, Bill Arnsparger and Bo Schembechler to Jim Tressel, Randy Walker, Terry Hoeppner, and Sean Payton.

Since Hoeppner left for Indiana following 2004, the downfall has been staggering. Miami went 7-4 in 2005 but has managed just the one winning season in nine years and has won two or fewer games five times. In engineering first-year improvement then signing an exciting recruiting class, Martin is hinting that he's the guy to turn things around for the Redhawks.