The big 2015 Colorado State football guide: In better shape than you think

The 128-team countdown previews one of last season's biggest breakouts.

Share All sharing options for: The big 2015 Colorado State football guide: In better shape than you think

Each year during the preview series, I talk about the thankless task of building a winner at the mid-major level. 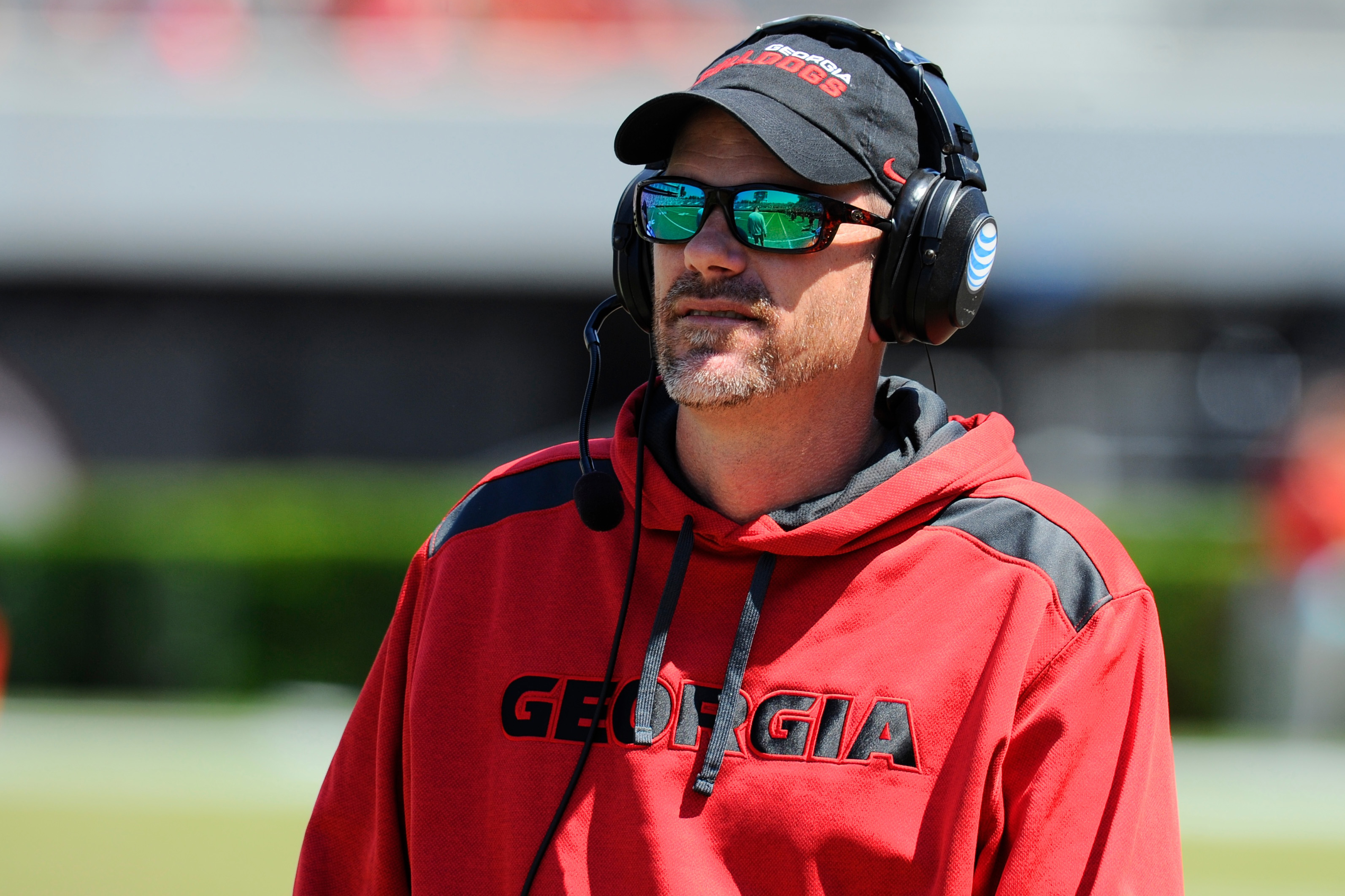 Biggest strength: Maybe the best receiving corps at the mid-major level (and one of the best at any level)

Biggest question mark: A defensive front seven that spent no time in the backfield

In one sentence: Considering the losses -- including coach Jim McElwain and quarterback Garrett Grayson -- CSU should expect a drop-off, but talent could ensure a minimal fall if new head coach Mike Bobo presses the right buttons.

For a while, Colorado State had the exception. In 1993, former Miami defensive coordinator Sonny Lubick inherited a CSU program that had as many zero- or one-win seasons (three) as winning seasons over the previous 15 years, and after a dramatic turnaround (CSU went 10-2 in 1994 and 11-2 in 1997), Lubick thwarted interest from big-name schools.

His reward: the field at Hughes Stadium is named after him. Not bad! Of course, returns diminished -- after averaging 8.6 wins per season from 1994-2003, Lubick averaged just five in his last four years, and he retired in 2007.

At that point, CSU's life cycle took on a familiar look. Former CSU quarterback and offensive coordinator Steve Fairchild took over, won seven games in his first season, then won nine in his next three and was fired. He was replaced by Alabama offensive coordinator Jim McElwain, who pulled off a nice turnaround, went from four wins to eight to 10, and took the Florida job after three years.

After making one hire in 15 years, CSU is on its third in eight. Mid-major success is determined by your athletic department, support, and infrastructure. When your coach cannot promise he's going to be in town for a prospect's full five years, you have to be able to promise a quality experience no matter the coach. You need a good environment.

The university is trying to figure out how best to support football. That appears to mean construction of an on-campus stadium to replace Hughes Stadium, which is picturesque, aging, and two miles from campus. The new stadium would seat 36,000 for a program that averaged 26,575 last year while winning 10 games. There is risk and predictable resistance involved, but ambition appears high.

New head coach Mike Bobo spent the last eight seasons as Georgia's offensive coordinator/lightning rod. He frustrated UGA fans who thought he should run when he was throwing and throw when he was running; even in an environment in which virtually all fans hate one of their coordinators, "Fire Bobo" took on notoriety.

Oh yeah, and Bobo was also one of the best coordinators in college football. I loved pointing that out to Georgia fans. In his first five seasons as coordinator, the Dawgs ranked in the Off. S&P+ top 40 five times and in the top 20 twice. In his last three seasons, they ranked sixth, eighth, and sixth. He was always solid, and with more experience, he became one of the best in the business.

Still, there's nothing flashy. He figures out what his personnel can and can't do and tries to put his guys in position with minimal risk. If your defense is on its heels, he'll try to shove you to the ground with the run and play-action. If your defense is in position to attack, he'll screen and draw you to death. When he's got a deep receiving corps and a great quarterback like Aaron Murray, he'll go vertical. When his quarterback is more limited and his run game is good, he'll draw up a six-yard pass on third-and-5 and go back to running.

Bobo is cautious, pragmatic, and successful. In theory, he's got a skill set that could be perfect for a head coaching position. CSU is getting aggressive in building infrastructure, and the addition of a steady captain makes sense.

The Rams were able to hold their own against lesser squads, but against good offenses, defensive deficiencies became painfully obvious. Boise State averaged 7.6 yards per play, Utah averaged 7.1, New Mexico averaged 7.0, and Boston College averaged 6.1. And it made it pretty hard to beat good teams.

The offense was steady, averaging under 5.7 yards per play just twice (against Utah State and Utah), but the defense just didn't have the horses.

The talent might not immediately change, but experience is high, and Bobo made an intriguing hire, bringing former UCF defensive coordinator Tyson Summers to Fort Collins. In his lone season as full-time DC, UCF improved from 48th in Def. S&P+ to 34th. The Knights were able to mix aggressiveness (their 20.1 percent Havoc Rate ranked ninth in the country) and big-play prevention (42nd in IsoPPP+, 16th against the rush). 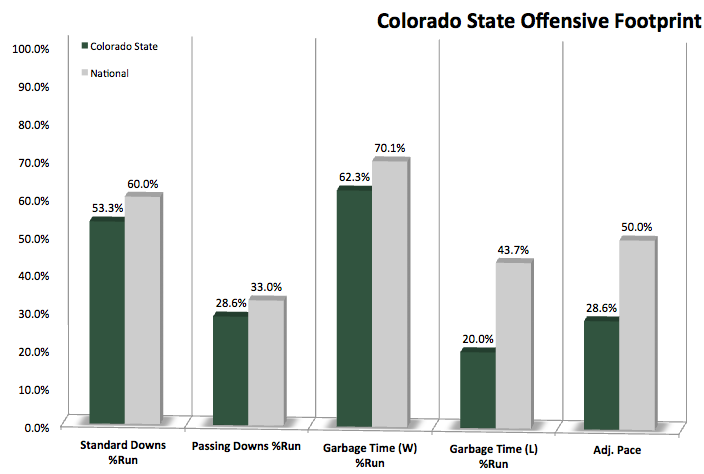 One assumes the pro-style Georgia identity will be strong. Not only did Bobo come to town, he brought former UGA offensive line coach Will Friend to serve as offensive coordinator.

If personnel dictates run-pass rates, it bears mentioning that CSU returns a ridiculously productive trio of receivers. Not only does All-American Rashard Higgins return, so does the duo of Joe Hansley and Xavier Williams, which produced 65 catches and and 9.3 yards per target. If tight end Kivon Cartwright is able to return to full speed following an ankle injury, that will give CSU's quarterback a superfecta of weapons that no other mid-major offense can match.

Higgins is a stunning athlete to watch -- his ability to find open spaces downfield despite double-coverage (in his last eight games of 2014, he averaged 8.5 catches and 168 yards per game) was incredible -- but his complementary pieces assure defenses can't focus only on him.

So ... who's that quarterback going to be? Grayson is NFL-bound after producing at a high level. Is sophomore Nick Stevens, once graded a mid-three-star prospect by the 247Sports Composite, ready to take on a Murray level of responsibility? Will Bobo and Friend choose to lean a bit on the run game until Stevens is able to flourish?

Hansley is on the smaller side for a college receiver, Higgins is medium, and Williams is large. Leading returning running back Treyous Jarrells is 5'7, 185, and fellow senior back Jasen Oden goes 218. (Strangely, Jarrells' explosiveness numbers were non-existent, while Oden showed serious jets with an inefficiency problem.) CSU's skill position players come in all shapes and sizes.

The big plays will be there, but you need to keep the chains moving as well. The line should help -- it returns three starters and five with starting experience. 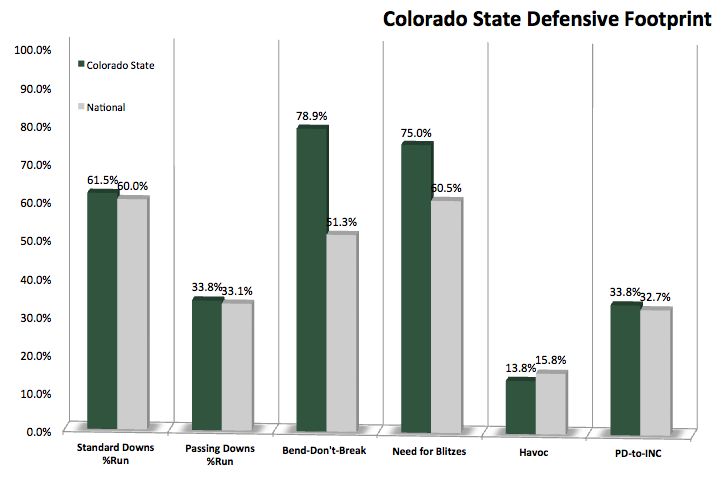 6. Bend, then get broken

Snaring Summers from UCF was a nice opening gambit for Bobo. But it was only one of many steps. The Rams' defense was fine at pulling a bend-don't-break routine against lesser offenses, but against more talented units, it was bend-then-break.

It started with run defense. CSU had minimal disruptive presence in the backfield, which meant that while opponents weren't breaking off huge gains -- CSU ranked in the middle of the pack in 10-plus-yard plays allowed (69th), 20-plus (70th), etc. -- they were consistently able to stay out of passing downs. Size doesn't appear to be any sort of issue, but CSU lacked speed up front.

The inability to knock opponents off-schedule appeared to catch up to CSU as games elapsed. The Rams ranked 97th in Q1 S&P+ and 55th in Q2, then fell to 106th in Q3 and 102nd in Q4. Of course, against good offenses, there was no wasting time. Utah scored 21 points in the first quarter, and Boise State had 30 at halftime.

CSU needed weapons it didn't have. We'll see if experience, a new coordinator, and some intriguing young options can help.

7. Get into the backfield

CSU ranked 112th in Adj. Sack Rate and 128th, dead last in FBS, in Stuff Rate (run stops at or behind the line). With no fear of negative plays, opponents were able to dictate possessions, and it randomly bit the Rams. Not only did Boise State and Utah put up huge numbers, San Jose State, Wyoming, and Nevada were able to engage in shootouts before falling.

A pass rush built around linebacker Cory James and end Joe Kawulok seems to have a little bit of promise, but while those two combined for 10 sacks in 2014, they also combined for just four non-sack tackles for loss, meaning they didn't do much against the run. In fact, only two players in the front seven managed more than 2.5 non-sack TFLs, and one (linebacker Aaron Davis, with 6.5) is gone.

There is plenty of experience in the front seven -- the top three returning tacklers on the line are seniors, and the top five returning linebackers are juniors and seniors -- but they got experience on a defense that wasn't very good. Might exciting, three-star youngsters like sophomore tackle Darnell Thopmson, freshman end Richard King, sophomore linebacker Evan Colorito, and JUCO linebacker Deshon Mayes have an opportunity to usurp some upperclassmen?

That CSU ranked 51st in Passing S&P+ despite minimal pass rush and a bad run defense says quite a bit about a secondary that returns almost everybody. The one loss (disruptive cornerback Bernard Blake) hurts, but he's still the only one.

Last year's top four safeties are back, including two (Preston Hodges and Trent Matthews) who combined for four tackles for loss, four tackles, and 15 pass breakups. Four of the top five corners are back, as well. If the secondary gets any help whatsoever from the front seven, it could shine, especially if exciting youngsters like sophomore Shun Johnson continue to develop.

CSU's special teams ratings were all over the map, from fifth in kickoffs to 102nd in punt returns and everywhere in between.

That punter Hayden Hunt returns is a good thing, and Delonte Gaines has all sorts of potential as a kick returner, but CSU's two highest ratings came in kickoffs and place-kicking, and Jared Roberts was responsible for both. His departure will make it tough for CSU to pull off another top-30 special teams ranking.

Colorado State's offense was simply awesome, its best since 2005, and while the Rams must replace Grayson and Hart, the receiving corps is fantastic, the line should be solid, and there is potential at quarterback.

It's hard to say CSU can maintain last season's levels, but between the returnees and Bobo's prowess, you could make the case that the Rams will only regress a bit on that side of the ball.

You could also assert that any offensive regression might be offset by defensive improvement. The D won't be good, but experience, a good secondary, and a potentially strong coordinator could result in an upward turn.

Is it possible CSU could lose its head coach, a potential NFL quarterback, and a running back good enough to go pro early ... but still remain a top-50 team? Obviously coaching changes always blur expectations, but I like Bobo, and while I think CSU won't be quite as strong as Boise State and Utah State, the drop-off could be minimal.