New defensive coordinator Manny Diaz can reclaim his reputation in his return to MSU.

There was a time when Manny Diaz was one of the hottest coaching names in college football.

He had a strong inaugural season at Mississippi State, where he produced S&P+'s No. 22 defense and had eye-catching results against the likes of Cam Newton's Auburn and Denard Robinson's Michigan. Then he took over Texas' defense and oversaw a top-10 defense against some of the best spread offenses in the nation.

From there, things came apart.

In Year 2, Texas slipped to 32nd in S&P, a fall that didn't capture the emotional weight for Texas fans of watching their team get mauled again by Oklahoma, allow Baylor to drop 50 in Austin and lose a shootout to West Virginia at home. The Mack Brown rebuild was stalling and the former whipping boy, OC Greg Davis, was no longer around to take the heat.

Mack hired old friend Greg Robinson to be an extra eye for 2013, but more likely as a fallback option in the event that Diaz's D struggled. After BYU obliterated Texas in Week 2, Brown pulled the trigger.

Diaz found a landing spot at Louisiana Tech and immediately elevated its defense from 114th in 2013 to 19th. Now he's back at Mississippi State, replacing Florida hire Geoff Collins, with questions still surrounding his ability to coach at the higher levels. His return to the place where things took off should demonstrate how much the Texas fiasco is indicative of what's in store.

In the meantime, a more careful look reveals a more nuanced view of Diaz than the knee-jerk reactions to his struggles at Texas.

Is Diaz too aggressive?

Diaz's focus on creating havoc and how that plays into his penchant for using the blitz is arguably more in line with Five Factors thinking and classic strategy than many other systems of defense. But it doesn't always look good in total yardage.

Because his aggressiveness borders on unconventional, it's easy to criticize when things go poorly. However, the Diaz defense is about stopping big plays with two-deep coverages that allow safeties to arrive before things get too out of control:

LA Tech is in its two-read defense, a modern favorite for stopping spread running and a longtime favorite of Diaz's. The nickel gets caught by a WR before he can fill the cutback lane on this power run. However, the safety reads from his two-deep perch and hawks down to tackle before the offense explodes.

Diaz has long found two-read to be a perfect complement to his zone blitzes. That was true in Year 1 at Texas, when things were going well:

The Longhorn D was excellent that year at stopping explosive plays thanks to using two-deep coverages to cover for an aggressive front. This team started a true freshman (Quandre Diggs) at one corner and an inexperienced sophomore (Carrington Byndom) at the other, but still produced a strong secondary. 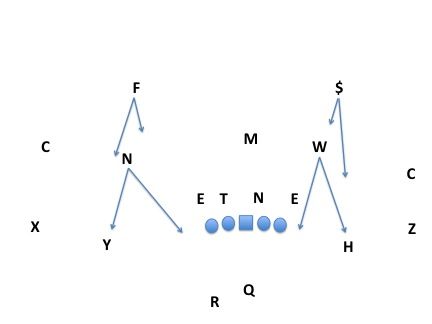 Alabama, Oregon and Ohio State relied more on two-read in 2014, and with good reason. It's become one of the safest ways to create a nine-man front against the run and use the safeties to clean up errors.
It's a variety of cover 4 that doesn't (usually) involve the safeties when assigning run-force responsibilities. Instead, the outside linebacker and cornerback handle those duties, depending on the offense's alignment.
Learn more.

In 2012, Texas shifted away from the two-read toward more press-man, in order to suit DB coach Duane Akina's vision of Texas as DB U. Between this, the lack of safeties who could be relied upon to erase mistakes and Texas' struggles to replace 2011's good LB tandem, everything snowballed.

Some of the other criticisms of Diaz, largely stemming from his time at Texas, simply don't hold up.

It's been suggested he's poor at coaching linebackers, yet he's been able to teach LBs at three schools to execute his system at a high level within a single year. It's been said that his schemes are too risky and unsound, yet his defenses have been strong at avoiding explosive plays, particularly when he's had a secondary taught to execute his preferred base coverage.

How will this work at Mississippi State?

Not a great deal changed at LA Tech. He's started using defensive ends in a 4i technique to try and cancel out both B gaps (inside the offensive tackles), which is becoming a standard practice as teams try to protect their spread-out linebackers from interior run responsibilities.

He's continued to use stand-up DEs in certain situations and move the tackles around, with the intent of getting mismatches.

At Texas, he would sometimes use fire zone blitzes against up-tempo teams, looking to kill drives with a tackle for loss when his charges weren't executing fundamentals consistently.

At Louisiana Tech, he brought a more conservative approach when facing a fast-moving unit like Auburn's, often zone blitzing with only four rushers, rather than five:

With seven pass defenders dropping back, it's easier to double hot receivers and leave the safeties in a two-deep shell to get strong pursuit against the run.

Against spread-to-pass teams like Marshall, he'd mix in more single-deep safety coverages and five-man pressures, looking to deny passes to the middle of the field and attack the QB more.

Much of what he's doing is standard. The difference is the willingness to risk yielding consistent gains in order to get an offense behind the chains.

The established wisdom of prominent figures like Nick Saban is to hold up with sound defense on the early downs and attack on third. But there's a lot to be said for being aggressive from the outset, forcing college quarterbacks and offensive linemen to avoid disastrous mistakes under pressure, creating mistakes rather than waiting to pounce on them.

As long as this doesn't allow explosives, it frequently results in three-and-out drives that give Diaz's offense good field position. It encourages third-and-long scenarios, in which the offense is pressured to make a play and turn it over.

If a team's reward for a 10-yard gain is merely a reminder that it has four tries to do it again, the calculus says that defensive aggression is sensible. If a defense gives up a 13-yard gain on first down after kicking off, then a 6-yard gain, then inflicts a 2-yard loss, it's looking at third-and-6 in the offense's territory, a winning situation for the defense. Why not?

The major needs are a front seven that can cause havoc and a secondary that can reliably tackle.

Mississippi St. Bulldogs blog For Whom the Cowbell Tolls

Mississippi State finished 16th in defensive S&P last year, thanks to strong pass defense anchored by veteran safeties and solid cornerbacks. The Bulldogs are losing both tackles, star middle linebacker Benardrick McKinney and both starting safeties. However, they return two of their top three corners and a defensive backfield with other solid coverage players in new middle linebacker Richie Brown, weakside linebacker Beniquez Brown and safety Kivon Coman, who all operated Collins' two-read base defense.

The Bulldogs have large returning linemen who were able to create tackles for loss in reserve roles, despite playing in a scheme that wasn't aiming to fire them into the backfield, as Diaz will do. Former five-star Chris Jones, a 6'5, 280-pound hybrid, stands out as a guy Diaz will move around to cause problems.

If the safeties can provide timely run support, the pieces are there for Diaz to put the Texas fiasco behind him and reclaim his reputation. If he does, with Dak Prescott back on offense for Dan Mullen, the ceiling is pretty high.