The big 2015 Tulsa football guide: Trying to be like Baylor makes sense

The 128-team countdown previews a team that's about to be in a whole lot of shootouts.

Share All sharing options for: The big 2015 Tulsa football guide: Trying to be like Baylor makes sense

In theory, Bill Blankenship was a lovely fit at Tulsa. He was a former TU quarterback and one of the most successful high school coaches in Oklahoma history. He spent four years as a Golden Hurricane assistant under Todd Graham before Graham left town for various locations.

His relationship with the university was strained by a former coach's treatment of his quarterback son Josh, but his hire was greeted by a series of "he's home again, and everything is as it should be" stories from the local press. 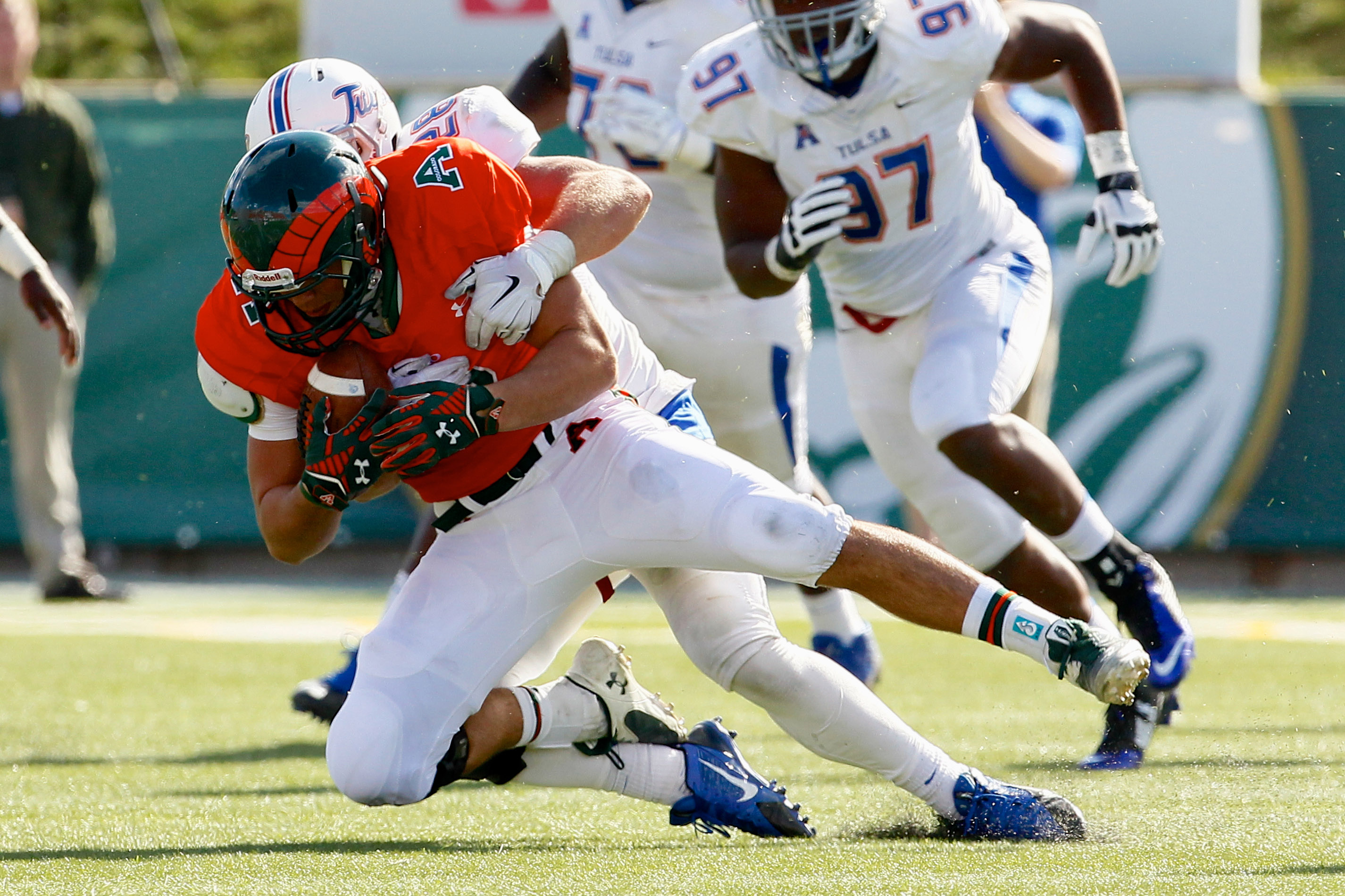 In one sentence: Philip Montgomery won't need long to restore Tulsa's offensive prowess, but a collapsed defense will likely hold the Golden Hurricane back.

TU won 19 games in his first two years, then lost 19 in his next two, and Blankenship was fired.

Football is a zero-sum game, and while a majority of coaching hires make sense on paper, they aren't all going to work out. Blankenship recruited well, and goodness knows there's plenty of talent in Oklahoma that doesn't get scooped up by Oklahoma or Oklahoma State. But if you aren't improving, then you are losing ground.

In theory, Philip Montgomery looks like a lovely fit at Tulsa. Montgomery spent 12 seasons as an Art Briles assistant, first as Houston quarterbacks coach, then as Baylor offensive co-coordinator, then as sole coordinator. He's familiar with the area he will be recruiting -- as a former Oklahoman, I'm legally allowed to say Oklahoma and Texas are basically the same state -- and he's put in the hours as a successful assistant. Now he gets to find out if he can succeed in the big office.

Like Chad Morris at SMU, Montgomery has brought literal energy in the style of offense he wants to run. A style that is pleasing to the eye will probably buy him some leeway with the fan base.

The AAC is a leftovers conference that combines snippets of Conference USA and the former Big East. Geographically, it might not make sense, and not many of these schools have historical ties. But a conference like this can bring a fun mix of styles, especially with Navy joining.

An important part of that formula could be the three Oklahoma/Texas teams -- SMU, Houston, Tulsa -- playing the type of high-octane football we've come to expect from that region. Last year, that was an issue: Tulsa ranked 95th in Off. S&P+, Houston ranked 98th, and SMU ranked 123rd. Tulsa scored 24 or fewer points six times but graded out the best of the three.

We don't know that all three will turn out to be successful head coaches -- in this zero-sum universe, odds are good that at least one fails quickly -- but from a style standpoint, quality is secondary to identity. SMU, Tulsa, and Houston now have strong identities.

3. Never off the ground

Tulsa ranked higher overall because the Golden Hurricane didn't spend as much time in the single-digit percentiles, but the peaks weren't peaks. They hit 45 percent against Tulane (seven-point win), 40 percent against Texas State (three-point loss), and 39 percent against Houston (10-point loss), and that was the highest they reached. And their percentile chart above just looks like a stabilizing heart beat -- single digits and 40s early, then a lot of teens, 20s, and 30s. No positive or negative trends, just a lot of below average football.

Typically a bad team will either start poorly and improve or bottom out. Tulsa just reached stasis. (This might have been a Blankenship staple -- one of the headers in last year's Tulsa preview was "Basically the same team all year.") 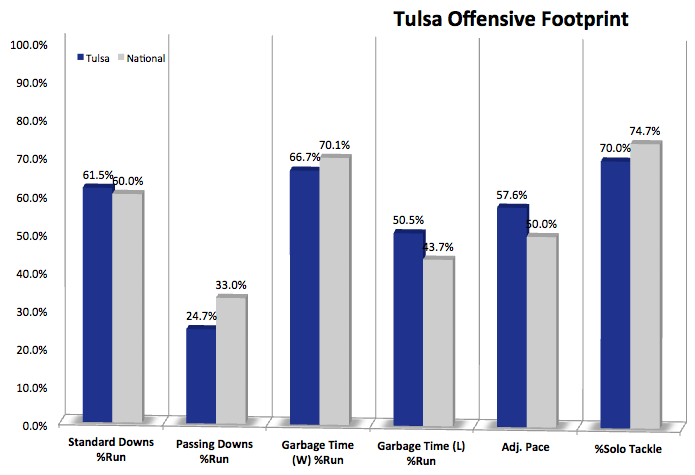 Let's compare and contrast Tulsa's personality stats above with those of Baylor in 2014:

Baylor played in the ultimate QB-friendly system, throwing the ball on run-friendly standard downs, running the ball on passing downs, throwing while ahead, running while (rarely) behind, playing at a crazy tempo (which, if you're getting first downs, keeps the defense nice and winded) and spreading defenses out as much as almost anybody in the country.

Everything about Baylor's system was designed to create opportunities and optimize the situation on the scoreboard.

But part of having a QB-friendly system is having skill-position weapons. You want guys who can either plunge forward for four to five yards at a time to avoid passing downs or rip off the big plays that prevent you from having to avoid mistakes on 10- to 12-play scoring drives. Tulsa had the former and almost none of the latter.

5. Big plays come from where?

Tulsa boasts four quarterbacks who are former three-stars. And in incoming freshman Chad President, the Golden Hurricane now have a Rivals four-star. Granted, last year's starter (Dane Evans) was far from amazing -- 55 percent completion rate, 17 interceptions, 3.9 yards per non-sack carry -- but there does appear to be raw talent, if other weapons can maybe rip off a big play every now and then.

Tulsa's run game boasted an almost unfathomable lack of big plays. The Golden Hurricane managed only seven rushes of 20-plus yards (120th in FBS), two of 30-plus (119th), and none of 30-plus. There was some efficiency, but Tulsa backs didn't create opportunities and took advantage of almost none of the ones they got.

Zack Langer did rip off a 64-yard touchdown run in April's spring game, and Montgomery's Baylor offense was designed to stretch defenses out as far as possible and minimize defensive help when players get to the second level. So maybe there's some potential here for Montgomery and offensive co-coordinators Sterlin Gilbert and Matt Mattox to coax out.

If the run game can provide a distraction, the passing game might be able to get somewhere. Almost all of last year's wideouts return, and if the efficiency is high enough, some explosiveness could shine through: Keevan Lucas had a 66 percent catch rate in 2014 and averaged 13.8 yards per catch in 2013, Keyarris Garrett averaged 14.9 yards per catch last year, and others like Derek Patterson (22.6 yards per catch) and Bishop Louie (14.3 yards per carry, 14.0 yards per punt return) showed potential in small sample sizes.

It wouldn't surprise me to see the offense take a step forward with the amount of experience involved, but there's still a big question mark when it comes to the run. Competence with the run could mean success with the pass.

6. The line will be a strength

Tulsa's offensive line deserved better. The Hurricane front kept defenders out of the backfield (20th in Stuff Rate, 33rd in Adj. Sack Rate) and produced line stats better than those of the offense as a whole. There were struggles in short-yardage, and there weren't enough second-level opportunities, but this was a decent line.

And it returns 74 career starts and all but one member of last year's two-deep. That's exciting. The line has experience, size, and a track record. Montgomery can work with that. 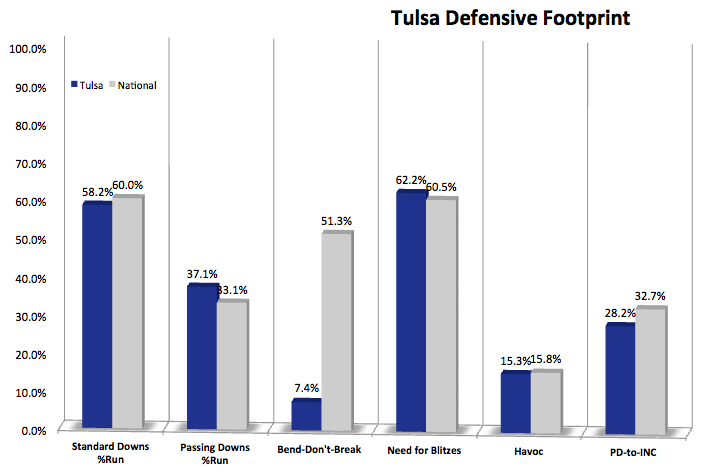 For each of Blankenship's first three years, Tulsa had one of the nation's more underrated defenses. The Golden Hurricane ranked 30th in Def. S&P+ in 2011 and 51st in both 2012 and 2013. They returned their top six linemen, five of their top seven linebackers, and every defensive back in 2014. I expected big things.

To point out the obvious, it didn't happen. Tulsa was invasive -- 22nd in Stuff Rate, 41st in Adj. Sack Rate -- but that was the only strength, and it was mitigated by what happened when the ball got past the line of scrimmage. Tulsa allowed 45 gains of 30-plus yards in 2014. Forty-five! This was tied for the worst in the country with Fresno State, but Fresno State needed 14 games to get to 45; Tulsa needed just 12.

Part of the collapse came from injuries: seven linebackers averaged at least 0.9 tackles per game, but only two played in all 12 games. Cornerback was a revolving door, with only one of the top five playing in 12 games and the other four missing a combined 11. Freshmen like linebacker Craig Suits and corner Kerwin Thomas ended up playing much larger roles than expected.

Still, this was a massive, almost overnight collapse.

8. One more go-round for Bill Young

The last time we saw Bill Younng, his Oklahoma State defense was sliding just enough for him to get the boot for a younger guy. The 68-year-old has served as defensive coordinator at Tulsa, Ohio State, Oklahoma, USC, Kansas, Miami, and OSU, but Mike Gundy replaced Young with aggressive Glenn Spencer after OSU fell from 21st to 43rd in Def. S&P+ in 2012.

After a year as a quality control assistant for Dave Christensen at Wyoming, Young became head coach at Yukon (OK) High School for a year*, and now he's back.

9. Plenty of play-makers in the front 7

Young's best defenses combined disruption up front with big-play prevention in the back. Tulsa was woeful at the latter, so much so that you have to figure Young might dial back the aggression until he can get a handle on the big plays.

While a few DBs ended up getting decent experience, three of the top four are gone, which could stunt growth. Senior safety Michael Mudoh is back, but the rest combined for 0.5 tackles for loss, one pick, and seven breakups. There are a few former three-star defensive backs in the mix, but almost none has proven much, and any of a foursome of freshmen could see playing time.

To the extent that Young feels comfortable getting aggressive, he could find fun pieces. Of the nine linemen and linebackers who recorded at least three tackles for loss, six return, including pass rushers Derrick Alexander and Jeremy Smith (combined: 41.0 tackles, 10.5 of which were sacks) and three run stuffers (tackle Derrick Luetjen and linebackers Craig Suits and Trent Martin) who combined for 17.5 non-sack tackles for loss. Tackle Jesse Brubaker returns to the fold after missing 2014.

(Plus, there's a chance, however small, that the NCAA shows a bit of compassion and allows Auburn transfer Khari Harding to play. Harding transferred to play closer to his ailing father, and after his transfer was complete, the NCAA changed its hardship waiver rule and deemed him ineligible. Somehow he was not grandfathered in on the old rule, which is frankly ridiculous. An appeal is in process.)

I can turn Tulsa into a viable team with just two ifs:

I'm confident No. 1 will happen. The combination of experience, a strong line, coaching prowess, and depth of options should result in solid offensive improvement. No. 2 probably isn't likely, though. I like Young, but the secondary will likely tie his hands.

Tulsa could find itself in shootouts, and if Young can figure out what to do to restore the D, then the Golden Hurricanes could look more like their 2005-12 selves than the 5-19 impostors of the last two seasons. Assume four to six wins in 2015, then assume a run at something better in 2016.