The 128-team countdown lands in New Orleans, where things are much better than they used to be, believe it or not.

In 2014, Tulane scored 8.8 fewer points per game than it did the year before and allowed a touchdown more. The Green Wave's full-season scoring margin went from plus-44 points to minus-149, and their performance in close games regressed -- they went 3-4 in one-possession games in 2013 and 1-3 in 2014. A great defense became good, and a bad offense got worse. 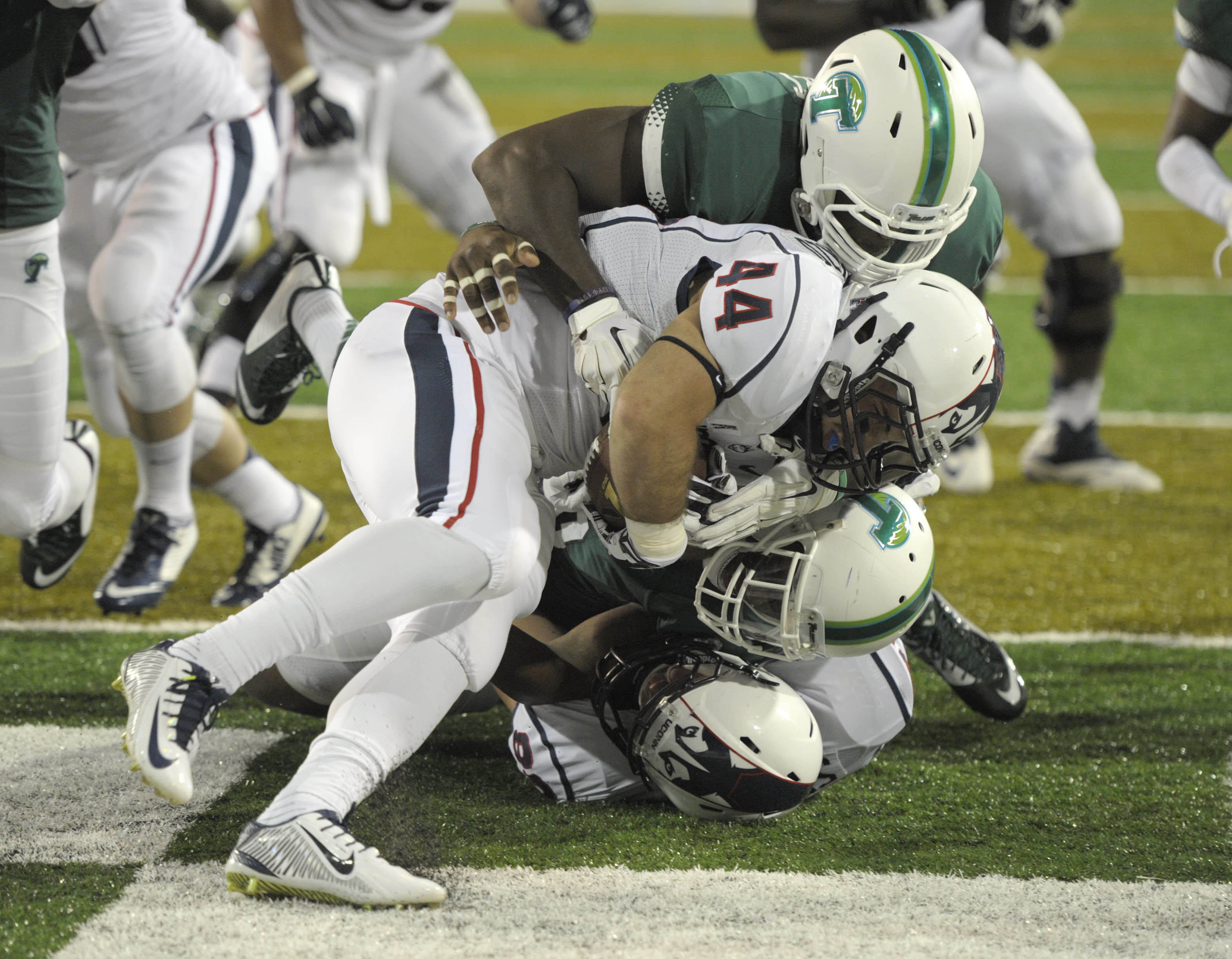 Biggest question mark: For about the 13th consecutive year, the offense has a lot to prove

In one sentence: Curtis Johnson is raising the bar, and his defense should again be awfully strong; his offense might need another year of development.

It's all about expectations, isn't it? Near the end of the Chris Scelfo era and throughout Bob Toledo's five-year tenure, there were none. The Green Wave had no identity, minimal skill, and a cavernous stadium. Now, they've got high defensive standards, a pretty on-campus venue, and bowl hopes. That last year's 3-9 season was disappointing, after Tulane had averaged 2.6 wins per year between 2008-12, was a sign of progress.

That's the thing about higher bars: you still have to clear them.

Here's what I wrote about Curtis Johnson when Tulane hired him in 2012:

Johnson is an intriguing hire. When you are a mid-major, your options are to hire an up-and-comer and hope he stays long enough to win, or hire a coach who failed at a major-conference level and is on his way down.

Johnson is an odd combination of experienced and up-and-coming. At 50 years old, the New Orleans native racked up 18 years of assistant experience -- he recruited Marshall Faulk to San Diego State, Ed Reed to Miami -- and spent the last six years as Sean Payton's receivers coach. He has been a receivers coach for 25 years, but he is a New Orleans guy. There is nothing on his resume to suggest he can turn underachievers into overachievers, but … there is nothing to suggest he cannot.

His staff is a combination of old hands and charismatic youngsters, and if he can bring former three-star recruits out of their shell and bring in new ones, Tulane could have a much higher ceiling.

While recruiting rankings haven't been kind to the Green Wave within their conference, Johnson has hammered the local channels. In his four classes, he has signed 24 players from New Orleans, 33 from elsewhere in Louisiana, and only 17 from out of state. Perhaps as a result*, Tulane has a roster that has suffered minimal turnover and is developing depth it has rarely had.

So now Tulane just has to win again. The Green Wave have won 10 games in two years -- the most for a two-year span since they won 13 games in 2002-03 -- but regressing by four wins from one year to another is never a good thing. The Tulane defense should again be sound, but it almost isn't an exaggeration to say that the Green Wave haven't had a good offense since Shaun King was quarterback.

Tulane isn't a good program yet. But if it's ever going to get there, it's going to be by following the steps Johnson has followed.

* If strong local recruiting doesn't have a direct correlation to turnover, it at least doesn't hurt your attrition levels.

In my recent Tulsa preview, we discussed a team with a small range between its best and worst performances. Tulane was a bit more unpredictable. Tulane ended up grading out better despite a season-opening road loss to the Golden Hurricane, mainly because the high points were higher.

The floors were similar; the ceilings were not.

What's funny about Tulane's in-season progression was that, no matter how high or low they strayed, their averages returned to normal. 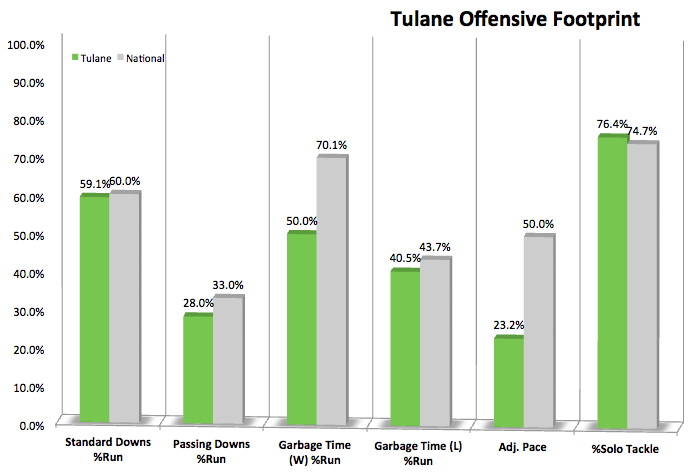 The last time Tulane averaged even 25 points per game, J.P. Losman was the quarterback. Losman is 34 years old.

So what has caused this? And what can third-year coordinator Eric Price do to turn the tide?

At least in 2014, one of the primary reasons for struggle was youth. You see that in the returning personnel. The leading returning passer and rusher and the SEVEN leading returning receivers are all sophomores. And while running back Sherman Badie was a revelation, the quarterback (Tanner Lee) and his receivers ... well ... played like freshmen. (And the only big-play threat in the receiving corps, Xavier Rush, missed five games with injury.) In theory, if you keep this unit together, there might be enough athleticism to thrive when chemistry gets up to speed.

But in theory, a Tulane offense shouldn't stink for 12 consecutive seasons. Theory and reality haven't seen eye to eye. They rarely do in New Orleans.

A 34 percent opportunity rate (percentage of carries gaining at least five yards) isn't very good. Of the 134 FBS running backs who had at least 120 carries, Sherman Badie's opportunity rate ranked 100th. But when you take into account the fact that Badie was a freshman running behind a line filled with sophomores, you come to the conclusion that Badie could be a special player.

Even with limited open-field opportunities, Badie managed to average 5.7 yards per carry. Granted, those opportunities dried up as opponents loaded the box and Badie hit a freshman wall -- first six games: 7.2 yards per carry; next six games: 3.3 -- but his potential was unmistakable. And his inefficiency was balanced a bit by Lazedrick Thompson and Dontrell Hilliard, who were more efficient and less explosive. Combined with the return of junior Josh Rounds and the addition of mid-three-star freshman Nigel Anderson, Tulane has more than enough high-caliber running back. But Price wants balance in his offense, and Tulane had none.

For the running game to thrive, the passing game has to at least suffice. With so many sophomores, you could talk yourself into this group doing impressive things in 2016 or 2017, but improvement in 2015 could be only marginal.

Teddy Veal was heavily targeted as a well-touted freshman, but his punt-returner skill set led to more dancing than yards, and his per-target average of 4.8 yards was the fifth-worst in the country for a No. 1 target. The median average for a No. 1 target was 8.3, almost double Veal's average.

5. Quite a few three-stars up front

Tackle Sean Donnelly was in his third year as a starter, but of the six other players who finished 2014 with starting experience, five were sophomores, and one was a junior.

All six of those players are now upperclassmen, and combined with contributions from up to six other linemen who were once three-star recruits, this line appears to have experience and potential. The sack rates were good (in part because Tanner Lee was throwing a lot of quick passes to Veal and others), and the line stats could have been worse considering the youth.

The offensive line and the running backs could combine to become quite formidable ... as long as defenses have to mind the passing game at least a little bit. 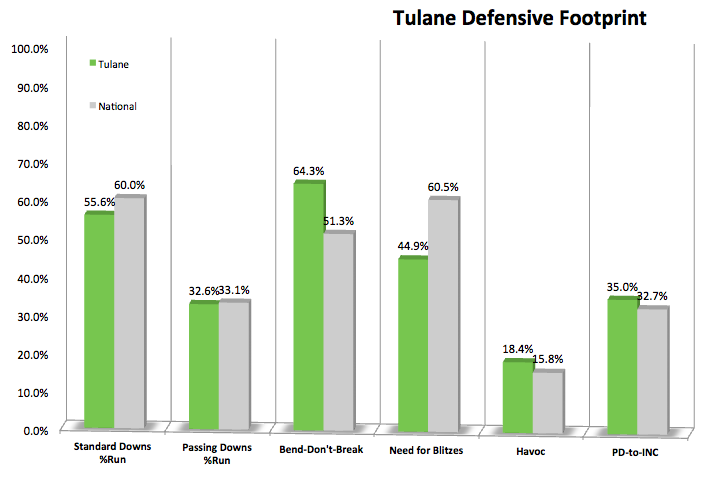 6. The offense only needs to be competent

The Tulane defensive line was spectacular in 2013; the Green Wave ranked eighth in Adj. Line Yards, first in both Power Success Rate and Stuff Rate, and seventh in Adj. Sack Rate. They had to replace two monstrous tackles in Julius Warmsley and Chris Davenport, so regression was inevitable.

But the line was still solid, and an experienced secondary was able to knock out big plays enough for Tulane to play high-quality bend-don't-break defense and snuff out scoring opportunities.

Six of last year's top seven linemen and six of seven linebackers return, which should allow Tulane to account for turnover in the secondary. Tulane fell from 18th to 55th in Def. S&P+ in 2014, but 55th is still good for an AAC team, and I wouldn't expect much, if any, regression. That could mean good things for the Green Wave if the offense is not awful.

Of course, you could rephrase that: That could mean good things for the Green Wave if the offense is not [what it has been for most of 12 years].

The pass rush dropped off, and it was easier to get to the second level of Tulane's defense, but the Green Wave still made plenty of plays. They fell only to seventh in Power Success Rate, seventh in Stuff Rate, and 34th in Adj. Line Yards, and now they return every linemen but one: Tyler Gilbert.

Gilbert was a strong run defender, and he could be missed, but it's hard to worry about the run defense with the return of tackles Tanzel Smart and Corey Redwine, end Royce LaFrance, and each of the top three linebackers, including Nico Marley (13 non-sack tackles for loss).

(Redwine briefly elected to forego his senior season last December, then returned as a graduate student. LaFrance sat out spring for academic reasons. Both are expected to be eligible this fall.)

The pass rush could still be an issue; assuming LaFrance returns in good standing, Tulane will return its sacks leader, but in playing a conservative 4-2-5 defense with minimal blitzing (linebackers combined for just 2 sacks), Tulane asked a lot of its line. That paid off in run defense, but a younger secondary might be asked to cover for quite a while if Tulane doesn't get more pressure from its front four on passing downs.

8. A lot to replace in the back

The Green Wave return a lot and replace a lot; getting Jarrod Franklin back from injury will help, but the pass defense is going to rely on players with minimal experience, be they 2014 backups like safety Leonard Davis or rotation newcomers like redshirt freshman Stephon Lofton or 247 three-star freshman Malik Eugene.

Tulane's run defense will be perfectly fine, but there are reasons to doubt the pass defense.

In a few previews each year, I note that a team's punter might have been its best offensive player, creating a field position edge that offensive efficiency could not. Special teams provide you an opportunity to make up ground that your primary units lost.

The sophomore return men seem to have some potential, and at the least, place-kicker Andrew DiRocco was a freshman. But there was almost nothing redeeming, and it almost certainly played a role in Tulane going 1-3 in one-possession games.

Tulane fell from 65th to 93rd in the F/+ rankings, but with increased experience in every unit but the secondary, you can talk yourself into the Green Wave improving back into the 80s or, with a few good breaks, the 70s. With five opponents who ranked 117th or worse and three home opponents who ranked 51st or worse, it isn't hard to carve a path back to bowl eligibility. But getting to 6-6 or better will require early survival.

Four of the five worst opponents don't show until after November 1, and a tricky road slate will all but ensure Tulane has a losing record heading into the final month. If this still-young team can keep its nerve, the Green Wave could craft a late-season streak and go bowling again.

It speaks to expectations that I'm saying this about a team that finished 3-9 and 93rd last year, but it does seem like Curtis Johnson is doing good things. His last two teams have been Tulane's best in the last decade, and he will be playing so many sophomores and juniors that, on paper, the Green Wave could play at a high level in 2016. This fall is a bit of a mystery, and while this team has upside, the bar should probably still be set at five or six wins and a ranking in the 80s.