The big 2015 Fresno State football guide: Waiting for the time to strike

Share All sharing options for: The big 2015 Fresno State football guide: Waiting for the time to strike

1. It all started so well

After falling to 4-9 in Pat Hill's final season, Fresno State hired Tim DeRuyter in 2012, and he went 20-6 in two years and took home the 2013 Mountain West title. The former defensive coordinator and 3-4 whiz at Ohio, Nevada, Air Force and Texas A&M found the perfect set of personnel for his aggressive needs. 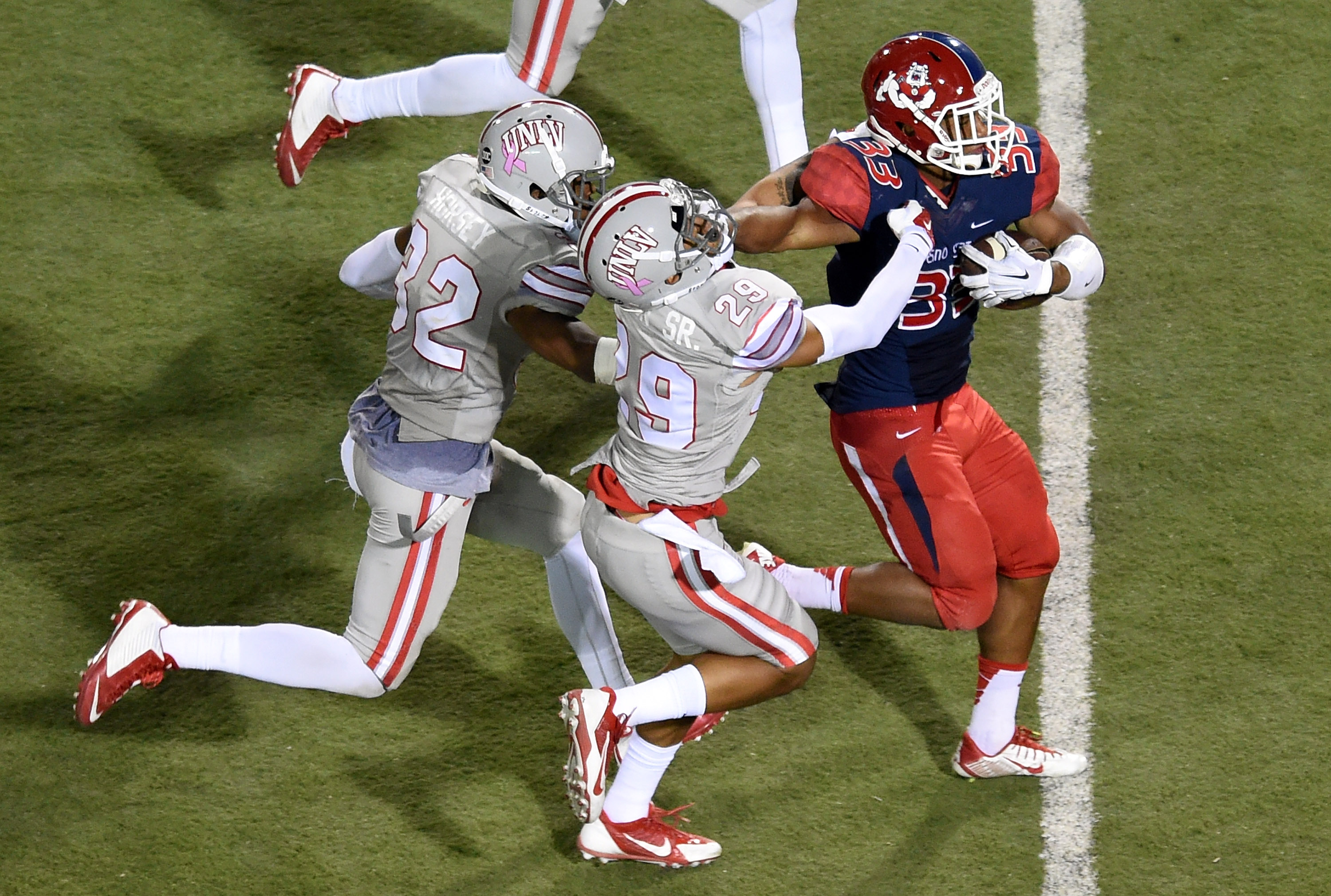 In one sentence: Fresno State is going to be far too young and thin to do serious damage, but the Bulldogs could start to thrive again in 2016-17 if they keep the band together.

It just makes sense when Fresno State is good. The Bulldogs are one of not too many California mid-majors and are perfectly placed three hours from San Francisco and 3.5 hours from Los Angeles (barring traffic), with access to the surplus of athletes that the Pac-12 couldn't snap up. Pat Hill and Jim Sweeney were both able to milk this convenience over long stretches of time -- Sweeney won at least eight games nine times from 1982-93, and Hill won at least seven games 11 times from 1999-2010. Both lost their respective ways at the end, DeRuyter was able to bring energy to an athletic squad that had gone just 4-9 in 2011, and the wins quickly rolled in.

And then last year happened. Quarterback Derek Carr, receivers Davante Adams and Isaiah Burse, two starting offensive linemen and three of the top five defensive linemen all left. The defense regressed, and the offense regressed a lot. Fresno State started and finished the season playing like one of the worst teams in the country but played just well enough in the middle to win the MWC West, maybe the single weakest division in FBS last year. They got rocked in the MWC title game, got rocked in a bowl they probably didn't deserve to make and finished the season 6-8, ranked just 102nd in F/+.

In the offseason, a load of players graduated, transferred or were asked to transfer. The result: returning quarterbacks threw 41 career passes last year, one returning running back carried more than five times, two returning wideouts caught more than eight passes and one returning defensive lineman had more than 7.5 tackles. The units that faced turnover in 2014 are double-dipping in 2015.

Now DeRuyter starts his fourth season in the middle of a contradiction: the roster is like what a first-year coach might inherit, talented and fast but young and thin. But DeRuyter is a fourth-year coach with a seat quite a bit warmer than it was last year. If he survives 2015, the base of talent and athleticism on the roster could mature into a solid team once again. But this could be a tough year.

2. The middle was decent

It was a team-wide struggle. Granted, four of the five awful games were against top-30 teams, but in these five games the Bulldogs averaged 4.1 yards per play and allowed 7.0. In the middle nine games (mostly against worse teams), they gained 5.8 and allowed 5.9. The defense still had plenty of rocky moments -- allowing 9.8 yards per play against Wyoming was particularly egregious -- but for a while the offense raised its game, even taking competition into account.

The peak lasted just long enough for Fresno to easily take down both San Diego State and Nevada, two teams that were better than them over the full season, and win the MWC West. And then the Bulldogs either trailed off or reverted to form. 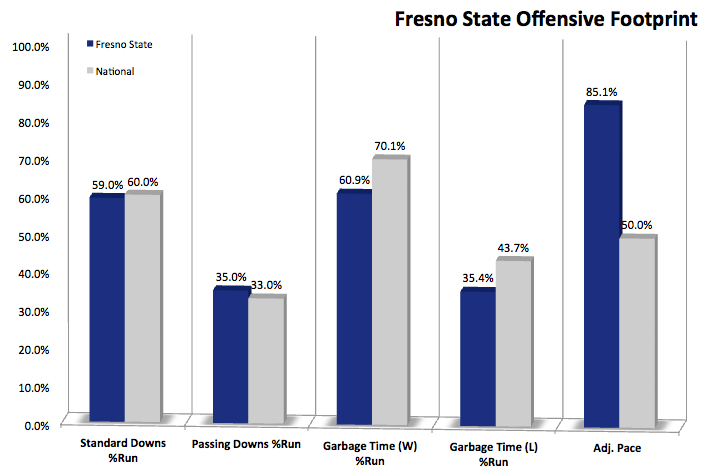 We know a Dave Schramm offense can work. In his first two years at Fresno, the Bulldogs ranked 33rd and 17th, respectively, in Off. S&P+. That was with a loaded cast of stars, obviously, but it proved that if Schramm has horses, he knows how to use them.

Schramm didn't have them in 2014 and might not in 2015, either. Duke transfer Brandon Connette was dreadful to start the season (23-for-41, 245 yards, one touchdown and three picks against USC and Utah), and Brian Burrell eased into the starting role. But while he did still have star receiver Josh Harper, this was a new quarterback throwing to mostly new receivers, and it didn't go well. The running game, which wasn't amazing even in 2013, struggled to make up the difference.

Now, the quarterback unit and receiving corps are double-dipping in the turnover department. Connette graduated, and Burrell left, leaving a battle between three young, former three-star recruits. There is plenty of upside among them, but as Zack Greenlee proved in completing just 44 percent of his passes in a bit role as a redshirt freshman, it sometimes takes a while to approach your ceiling. Greenlee is the de facto old-guy on the depth chart now, but redshirt freshman Kilton Anderson and incoming freshman (and one-time Mississippi State commit) Chason Virgil could both have a shot. All of them were in for spring, and all saw time with the No. 1 offense.

At receiver, Aaron Peck is a decent big-play threat (though he would need to either come up with more big plays or raise the success rate to be a league-average threat), and there are plenty of former star recruits and solid athletes in the mix, from sophomore Delvon Hardaway to senior Justin Johnson to redshirt freshman Keyan Williams. In theory, if you throw enough options out there, your odds of coming up with something viable are good. But Peck and Johnson are the only upperclassmen, and Fresno State at its best is spreading the ball around to a ton of guys. While Josh Harper was targeted 10 times per game, five other players were targeted at least twice per game. A lot of redshirt freshmen or sophomores are going to see passes; that doesn't always work out well, especially with a young quarterback throwing the passes.

Meanwhile, because of tempo, Fresno managed to hand to Marteze Waller and Josh Quezada a combined 360 times last year as well. Waller's back, but almost nobody else is. That means either an absurd load for Waller (who might be big and explosive enough to handle it), or more freshmen and redshirt freshmen getting touches. Schramm is going to be riding with the young guys this year. That probably means exciting things for 2017. But for 2015, not so much.

5. How much is a Wichmann worth?

If you compare Fresno State's line stats to its overall offensive stats, you get the impression that the line was a strength. The Bulldogs were great in short-yardage situations and suffered few negative rushes, and the sack rates weren't awful. Three two-year (or close to it) starters return, but all-conference guard Cody Wichmann doesn't. How much were he and fellow guard Sean Rubalcava responsible for the short-yardage success? And how much of a role will some well-touted freshmen and redshirt freshmen play? (And are you catching onto a "young guys" trend here?) 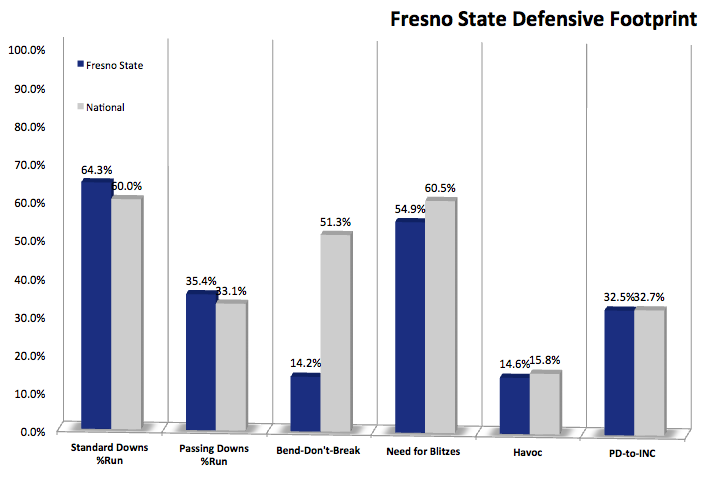 Defense dragged Fresno State down a little bit in 2013 and certainly didn't pick the Bulldogs up when the offense regressed. They wanted to attack and occasionally did so effectively, but in the process of attacking, they got sliced up in the secondary. The Bulldogs gave up 31 passes of 30-plus yards (second-most in the country) and 18 passes of 40-plus (most).

The secondary should be more experienced this time around, but Fresno's two best pass rushers, nose guard Tyeler Davison and linebacker Donavon Lewis, are gone. Stop me if you've heard this before, but freshmen and sophomores will likely play a large role up front. The Bulldogs basically played three linemen last year, and two are gone. Even if some young athletes start playing well, they're going to play like young athletes, and Fresno's decent line stats will probably regress.

7. Everybody in the Mountain West has good linebackers

As we roll through this MWC preview series, it seems like I'm saying "[Team A] should have really good, experienced linebackers this year" quite a bit. I've said it about UNLV and Hawaii, and now I'm going to say it about Fresno State.

Seniors Kyrie Wilson and Ejiro Ederaine are strong run-stoppers for a defense that desperately needs them, and while almost no linemen played last year, quite a few LBs saw action. Two starters are gone, including the ace-blitzer (Donavon Lewis), but five returnees had at least 16 tackles. And the number of former three-star recruits (per the 247Sports Composite) attempting to work into the rotation is large.

Because of the returning personnel, there's a chance that last year's strength (run defense) gets stronger while the pass defense gets weaker. In a pass-happy conference, that's far from optimal, but at least if you can force opponents to become one-dimensional, you can create more opportunities to attack like DeRuyter has always wanted his defense to attack.

8. Potential is not a problem

When a cornerback logs 70.0 tackles in a season, either he's fantastic in help defense, or his man is catching a ton of passes. For Charles Washington, it was likely both. Fresno defensive backs (including Washington) ended up having to chase receivers down quite a bit, but his 5.5 tackles for loss suggest he was spending quite a bit of time near the line of scrimmage.

Washington's return is probably a net gain, as is the return of five of last year's top seven DBs. And in terms of speed and play-making potential, there's a lot to like here. Safety Dalen Jones managed to break up six passes in limited opportunities, and a few of this year's most highly-touted signees -- JUCO transfer Alan Wright, freshmen Mike Bell and A.J. Greeley -- are DBs. The ceiling appears high, and maybe this is an instance where a fast unit needed just a little more experience to start playing at a high level. The experience is there this year. We'll see about the rest, especially considering a potential regression in the pass rush.

Fresno State is starting over in the returns department; this is not much of a problem in kick returns (not a strength last year), but LeKendrick Williams and Derron Smith were solid, efficient punt returners. If one of these new, young receivers or defensive backs can do well in this regard, the rest of the special teams unit should be just fine. Garrett Swanson was a fair catch machine on punts, and his kickoffs, while not incredibly deep, set the coverage unit up well to prevent returns. This could be a top-30 or top-40 special teams unit if the returns don't stink.

Last year, Fresno State was about three different teams, and while it's difficult to figure out which was the real one, it doesn't really matter because newcomers and youngsters are going to be playing serious starting or second-string roles at quarterback, running back, receiver, offensive guard, defensive line and defensive back. There are some nice, experienced pieces -- Marteze Waller, Aaron Peck, a few offensive linemen and linebackers, Charles Washington -- but youth will determine whether Fresno State is a contender in this year's MWC West race.

And here's where we remind ourselves that, inconsistent or not, Fresno State did still win the West. The Bulldogs did still beat SDSU and Nevada by a combined 31 points. They did still play pretty well in their first trip to Boise. The high points were still pretty high, even if the overall regression was stark.

Fresno State could back into the West title again -- it's not like SDSU or Nevada are going to be amazing -- but the primary goal for the Bulldogs is to look just good enough to keep DeRuyter's name from rising too far on the hot seat lists. There was some serious disposal of dead weight at the end of the season, and this team is going to be too young to play consistently well. But if the core of the roster and coaching staff stick together into 2016 and 2017, the Bulldogs are going to be awfully good. But 2015 is a transition year.