The 128-team countdown reaches a program that should finally see investments pay off.

Share All sharing options for: The big 2015 New Mexico football guide: Ready for a breakthrough season

Bob Davie's career win percentage has fallen from .583 to .474 since taking the New Mexico job three seasons ago. He inherited a roster as demoralized as humanly possible. In three years, New Mexico has gone 4-9, 3-9, and 4-8, and the former Texas A&M and Notre Dame defensive coordinator has yet to craft anything resembling a decent defense.

Davie is likely to begin showing up on hot seat lists, if he hasn't already.

Whether anybody noticed, however, he has dragged the Lobos toward respectability.

They are moving up. Here's some proof: 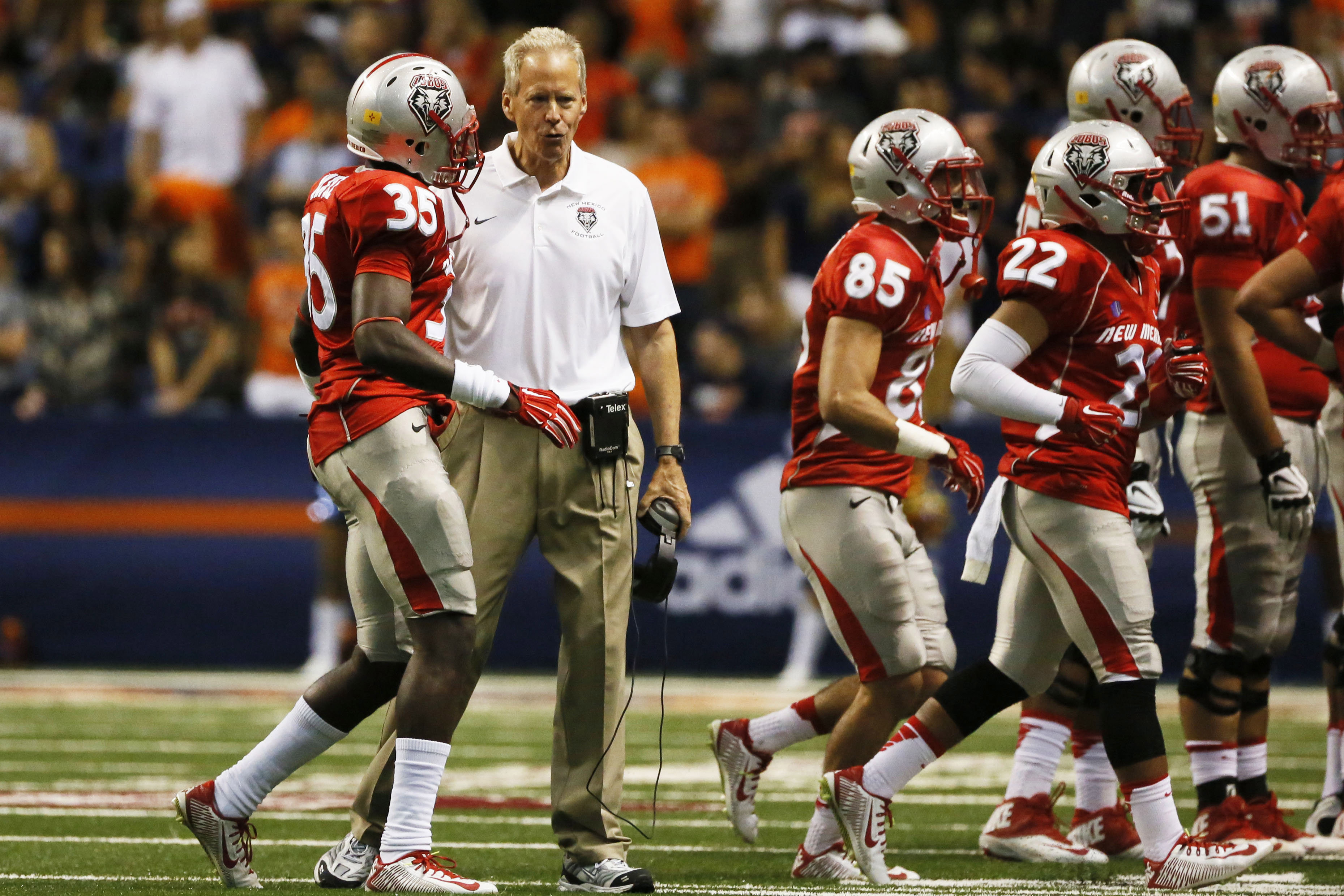 Biggest question mark: Everything that involves the word "defense"

In one sentence: Bob Davie has spent three years rebuilding a broken program, and 2015 could be the year he reaps the rewards.

New Mexico was last a league-average team in 2008, when Boise State's Kellen Moore was a freshman, Nevada's Colin Kaepernick was a sophomore, and neither Boise State nor Nevada were actually in the Mountain West.

Rocky Long left after falling from 9-4 and 4-8 and trashed the lack of program support on his way out of the door; then the Mike Locksley era left the the team looking like the New Mexico prairie after winds have blown a fire away. There was no quick road back, and Davie had to know that.

Davie has done the hard part -- building the foundation, creating depth, figuring out how to recruit solid athletes to Albuquerque -- and now here comes the hard part: winning. No matter what kind of wreckage the last guy left you, you're going to have to get back to .500 and beyond at some point.

New Mexico returns an exciting young quarterback, a loaded backfield, four players with starting experience on the offensive line, three of its top five tacklers on the defensive line, five of seven at linebacker, and five of seven at defensive back. This will be the deepest, most interesting New Mexico team to take the field since 2007, and the schedule features six teams that ranked 111th or worse in the F/+ rankings last year, not to mention big home win opportunities against teams like Utah State, Colorado State, and Air Force.

If the Lobos don't get over the hump in 2015, it might not happen under Davie. (Then again, a vast majority of this year's exciting returnees will be back in 2016.)

2. A different team every week

Go ahead. Look at the percentiles data above and try to find a trend. I'll wait.

New Mexico's best games were the fifth, ninth, and 12th of the season. The worst were the second and 11th. They played poorly against good teams (Arizona State, Colorado State), except for when they didn't (Boise State). They played well against bad teams (UTSA, Wyoming), except for when they didn't (UNLV). All of my go-to tricks come up short when looking for trends.

The best explanations for a trendless season: youth and injury. New Mexico was putting its offense in the hands of a freshman quarterback and a sophomore running back, and almost nobody on the defensive front seven could avoid missing time.

Davie's former boss Lou Holtz famously says that you coach a different team every week of the season; that was more literal for New Mexico. But here's where I break out one of my own truisms: injuries hurt in the present tense but help in the future tense. New Mexico now boasts a wider base of experience than it has in a really long time. 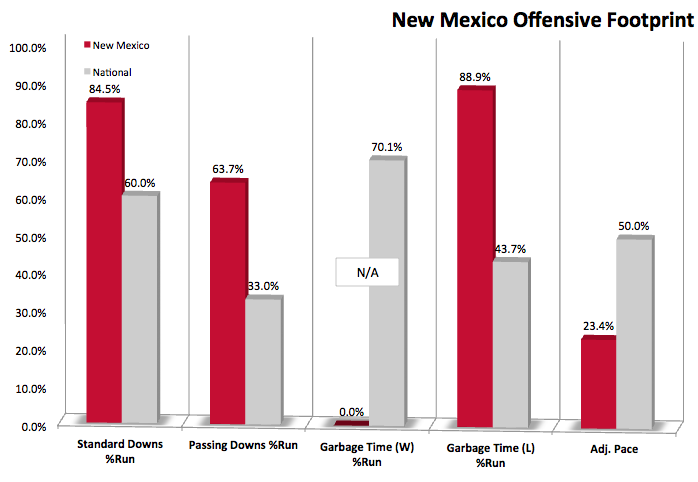 There is power in identity, in knowing how you're going to move the ball and score points when you need to. It is something you can lean on in must-get-yards-now situations. When Davie came to Albuquerque, he took his run-first preferences in an extreme direction by bringing aboard offensive coordinator Bob DeBesse, who had previously served under modern option master Willie Fritz at Sam Houston State.

DeBesse's offense has identity in droves. New Mexico runs the ball as frequently as almost any non-service academy in the country -- more than five of every six standard downs feature a rush, as do nearly two-thirds of passing downs. The Lobos have crafted an awesome run-first identity in a pass-first conference, and it really works.

New Mexico's offense didn't actually improve in 2014, but it didn't regress either, which was impressive. The Lobos ranked 48th in Off. S&P+ in 2013, then did so again despite dealing with injuries to quarterback Cole Gautsche and a healthy dose of redshirt freshman Lamar Jordan. Jordan wasn't as explosive a rusher as the big Gautsche, but he's a better passer, and he was healthy. With Jordan running the option and the combination of Teriyon Gipson and Jhurell Pressley combining for 22 carries per game and 7.2 yards per carry (!), the offense continued to play at a high level. It was impressive enough that Davie moved Gautsche to tight end for his senior season.

The Lobos are going to do what they do, and if Jordan improves between his second and third seasons on campus, as is often the case for quarterbacks, this will be their best offense yet.

An interesting monkey wrench: New Mexico signed former Colorado Washington State quarterback Austin Apodaca, who threw for 2,534 yards at Mesa Community College last year. If he overtakes Jordan at some point, the run-pass rates could change a decent amount. He's athletic, but he wasn't signed to run the ball 80 percent of the time.

Jordan, Gipson, and Pressley are all back. (Pressley is not yet enrolled, but he's still expected to play.) So is sophomore backup back Romell Jordan, who averaged 6.6 yards per carry in limited opportunities. Three-star sophomore Daryl Chestnut waits his turn.

This offense could be awesome, in other words. There's always the possibility for stunted growth at quarterback and/or QB controversies. The injury bug could always strike at an unfair rate. There are obstacles, but after two years at No. 48 in Off. S&P+, good fortune could produce New Mexico's best offensive efficiency ratings yet.

A run-heavy offense is led by a giant, road-grading offensive line, right? Nope! New Mexico ranked 21st in Rushing S&P+ and 58th in Adj. Line Yards with a starting line that averaged just 6'3, 289.

Four-year starting center LaMar Bratton played a large role in the run game's success, and 315-pound Jamal Price did give the Lobos some extra heft, but four players with starting experience (57 career starts) return, as do all of last year's second-stringers. Throw in JUCO transfer Tevia Fonua and well-touted redshirt freshman Aaron Jenkins, and you've got a line that might not regress much. 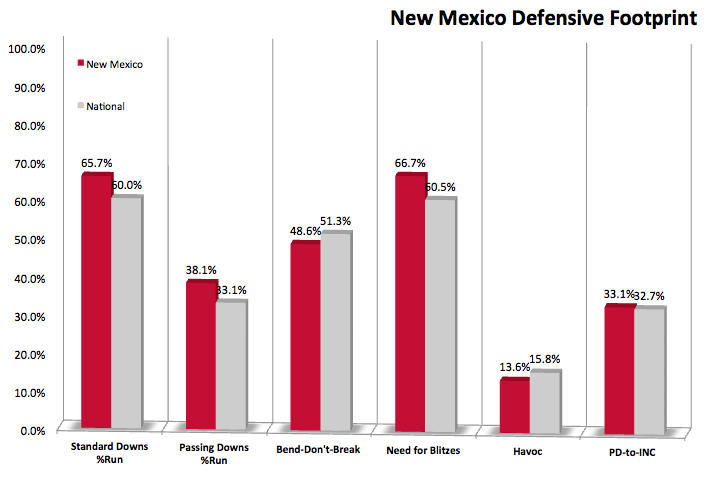 New Mexico has had a top-50 offense for each of the last two years and has gone 7-17. That tells you everything you need to know about the Lobo defense. While Davie and his staff have made a significant difference on offense, there has been no defensive traction -- UNM ranked 120th in Def. S&P+ in Locksley's last year and has ranked 120th, 124th, and 119th since.

Perhaps it was encouraging that UNM's numbers improved a bit despite ridiculous injury issues in the front seven. Veteran coordinator Kevin Cosgrove's first year wasn't good, but it could have been worse. The Lobos were able to generate more pressure than usual, thanks mostly to end Nik D'Avanzo (who returns) and linebacker Tevin Newman (who doesn't).

To further emphasize speed, Cosgrove is moving more to a 3-3-5 structure that worked well for New Mexico under Rocky Long. The defensive line has enough size to handle the pressures associated with speed-over-size defenses, and hey, you might as well go all-in on speed when you're already 126th in Power Success Rate.

7. Keep the first string on the field

In the absence of extreme talent, chemistry begins to matter more and more. And from week to week, one guy probably didn't recognize the guy lining up next to him. Plenty of guys got playing time, and a few flashed play-making potential -- two of junior tackle Cole Juarez's tackles were behind the line, as were 2.5 of rush end Donnie White's, and sophomore linbacker Kimmie Carson had five tackles for loss and three break-ups.

A batch of JUCO transfers are coming to Albuquerque, too. Good health and a couple of breakouts could lead to significant improvement here.

A permanent nickel defense relies on you having plenty of able bodies in the back. The secondary dealt with plenty of its own personnel issues -- four players played in all 12 games, and seven potential regulars missed time -- and players like corners Jadon Boatright and Cranston Jones flashed some play-making abliity. (Jones had a strange stat line: only 22 tackles, but 1.5 TFLs and seven passes defensed.) The first string might be pretty decent, but the second string will be awfully green. If former three-star recruits like Isaiah Brown, Juwan Jones, and incoming freshman Blair Manly start living up to hype, then maybe there's necessary depth here, but that's not a given.

New Mexico's special teams ratings were dragged down by iffy punt returns and mediocre place-kicking. But if you're going to be returning a lot of kickoffs (and to be kind, opponents indeed had plenty of kickoff opportunities), it's probably most important to be good at returning them. New Mexico had two tremendous kick returners, Ridge Jones and Carlos Wiggins, and returns both this year. For that matter, the Lobos had a booming kickoffs guy, too, in Jason Sanders. You could say they were more well-equipped for shootouts than defensive slogs.

10. The schedule for a surge

It doesn't take many ifs to convince you that both New Mexico's good offense and wretched defense will improve. And if the Lobos already ranked 94th in F/+, improvement could take them into the 80s or, with some luck, 70s.

This isn't a make-or-break year. Or at least, it shouldn't be. If things don't come together as I think they might, most of UNM's best players will still be scheduled to return. Still, after methodically laying a solid foundation without the wins to show for it, some affirmation would be nice.

New Mexico should have a killer run game and a defense that is healthier and more successfully aggressive. There will be shootouts, but the Lobos should be well-equipped to survive them. Davie has done a nice job of rebuilding a broken program; now we'll see if he's the guy to continue the renovation.