The 128-team countdown examines an American Athletic Conference contender that should have one of the country's best passing games.

Over the previous nine years, Cincinnati's No. 47 F/+ ranking in 2014 was its third worst behind 2013 (64th) and 2010 (58th). That Tommy Tuberville has been in charge for two of those three seasons could be a sign of concern, if you're looking for one. The defense has yet to play at a top-50 level under Tuberville, and the running game, long a Tuberville staple, held the Bearcats back last year. 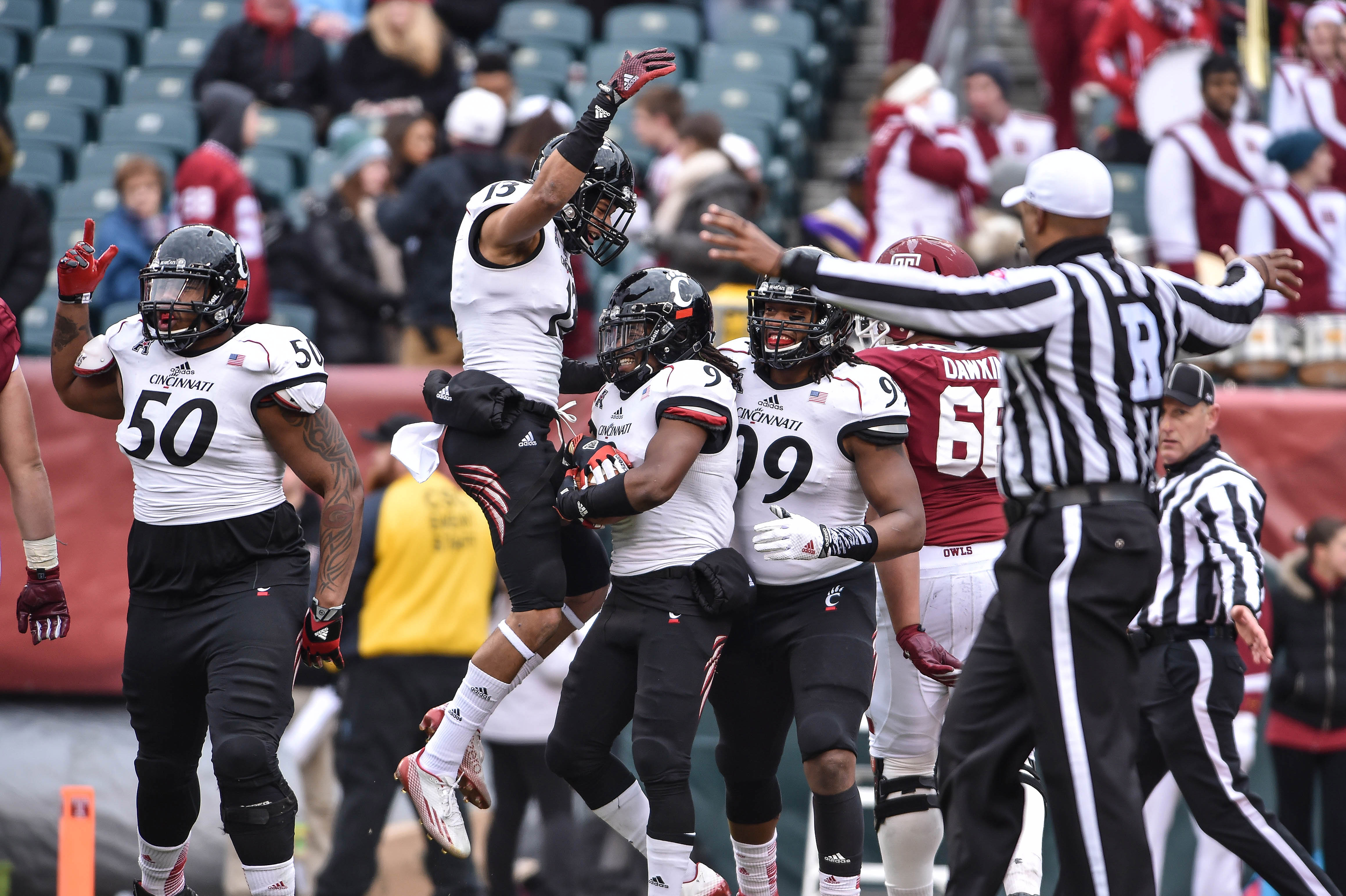 Biggest question mark: The middle of the defense has to replace a lot

In one sentence: Cincinnati improved and won nine games despite massive injuries; if reasonably healthy, the Bearcats are the safest bet in the AAC.

If you ignore context, you wonder about Cincinnati's trajectory moving forward. But you have to ignore a LOT of context, as few teams have been wrecked by injuries in the way Cincinnati was.

On defense, the fact that the Bearcats improved at all (from 62nd in Def. S&P+ to 52nd) was impressive considering they had to replace every defensive tackle, lost likely starting cornerback Adrian Witty to injury, and got a combined four games out of what were supposed to be two contributing linebackers. UC was forced to become far more conservative than it wanted.

But after a slow start that featured blowout losses to Ohio State, Memphis, and Miami and a far-too-close win over Miami (Ohio), the Bearcats played like a legitimate top-25 team (we'll ignore the bowl loss to Virginia Tech, since it featured a walk-on quarterback because of injury) and finished 9-4. It was a second straight slow start for Cincy under Tuberville, but this one was far easier to understand.

Cincy enters 2015 with reason for severe optimism. Williams and Green join Mike Boone (who played quite well) in the backfield, and quarterback Gunner Kiel returns each of his top seven weapons from one of the nation's better passing attacks. Cincinnati must replace five offensive linemen (including an all-conference tackle) but returns four (including an all-conference tackle), and while the defensive front seven has some retooling, the secondary is in far healthier shape.

And after finishing 2014 strong, Tuberville inked what was deemed by the 247Sports Composite to be the best class in the AAC. Recruiting and last year's injuries have created what might be the strongest two-deep in the conference, and the schedule features visits from each of Cincy's primary division rivals (Temple and UCF).

If you're looking for reasons to set high expectations at Nippert Stadium, you've got them. Of course, good or bad, it's rarely a smart idea to set expectations for a Tuberville team. Regardless, the Bearcats should be fun as hell on offense, so even if they don't live up to the expectations I am setting for them (despite the fact that I know better), the entertainment factor should be high.

After a brilliant performance against Toledo, Cincinnati hit a tailspin before rallying.

With the way Cincinnati running backs were exploding like Spinal Tap drummers*, it would be easy to pin a lot of the early troubles on the running game. After all, after rushing for 148 yards in the season opener against Toledo, UC averaged 83 rushing yards per game over the next four games.

But opponents were still struggling to get a grasp of Gunner Kiel and the passing game, and the offense was only so much of a problem. The biggest early issue for the Bearcats during their back-to-back-to-back blowout losses was the other side.

Mike Boone rushed 34 times for 325 yards against USF and Tulane in October, and UC found ways to stabilize the run. That allowed the Bearcats to improve offensively even as Kiel began to deal with injuries of his own.

So what changed? The level of opponent, certainly. It's easy to look good when you're defending against SMU, USF, Tulane, UConn, and Temple. But Cincinnati's play took a clear step forward even when you adjust for opponent, and it's hard to figure out why. The personnel didn't change much, and while UC coaches began to use words like "simplify," that's what you always hear when a defense is struggling.

But SOMETHING changed, and the defense clicked.

Now, more change is afoot. Defensive co-coordinator Hank Hughes moved on to the same role at Nebraska, and Tuberville promoted Steve Clinkscale as the new co-coordinator with Robert Prunty. And while the secondary appears experienced, UC must replace four of its top six linemen and two fantastic linebackers (Jeff Luc and Nick Temple). If the Bearcats start slowly for the third straight season, defense will again most likely be the reason.

* I'm allowed to use the Spinal Tap drummer reference only once per annual preview series, and I've now played that card. Hold me to that. 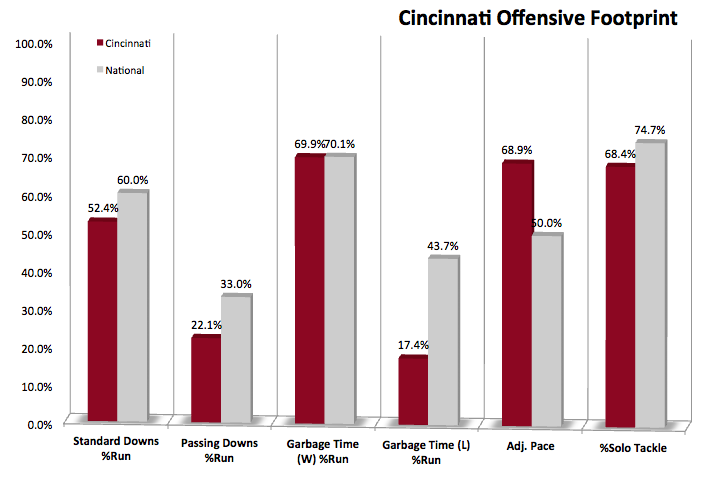 3. An excellent offense despite exploding backs

Even with a new running back seemingly every series, Cincinnati produced a top-50 running game, lacking in big plays to a degree but efficient enough to take heat off of the pass.

And despite all the shuffling, UC had just about every stat that you want to see when you're starting a young quarterback: the Bearcats were explosive on passing downs (what I tend to call the play-maker downs), they improved as a half unfolded, and they adapted when a particular tactic stopped working.

If Kiel gets hurt again, all bets are off. Seniors Jarred Evans and Michael Colosimo combined to complete seven of 18 passes last year, and the next best options are either a redshirt freshman (Hayden Moore) or a true freshman (Ross Trail). But that goes for most teams. If Kiel's healthy, this offense will be phenomenal.

Cincinnati Bearcats blog Down The Drive

Now that the dust has settled, UC boasts three running backs who have posted an Opportunity Rate (percentage of carries gaining at least five yards) of 39 percent in one of the last two seasons -- Boone (41 percent) in 2014 and Williams (42 percent) and Green (39 percent) in 2013. And if these three either struggle, there could be interesting options like walk-on sophomore Bobby Brown (7.3 yards per carry in limited action) and mid-three-star freshmen Joshuwa Holloman and Taylor Boose.

Cincinnati has rushing options, and goodness knows there are receiving options. Shaq Washington is a steady possession man -- of the 75 FBS players targeted with at least 95 passes in 2014, Washington was one of only 25 with a catch rate of at least 67 percent. He and Max Morrison are the camp-out-in-a-hole-in-the-zone guys, and Mekale McKay, Chris Moore, and Johnny Holton (combined: 17.8 yards per catch) are the field stretchers.

UC is loaded with exciting senior receivers, and if defenses have to keep an eye on the run, Cincinnati is going to do some bad things.

Offensive coordinator Eddie Gran, about whom I was a bit worried when he was first hired -- identity is an important thing, and his quotes reeked of "we're going to do everything!" -- proved his mettle, and with such depth at running back and receiver, he will have plenty of creative outlets.

But there is another area where injuries could wreck plans: offensive line.

Cincinnati finished with nine players having started at least one game, but five are now gone. All-conference tackle Parker Ehinger is back, as are two other established starters, but any injuries will likely lead to newcomers playing large roles. Maybe that will work -- Cincy boasts three three-star redshirt freshmen, two JUCO transfers, and two three-star true freshmen, and upside doesn't seem to be a problem -- but counting on freshman linemen to keep your offense moving is scary. 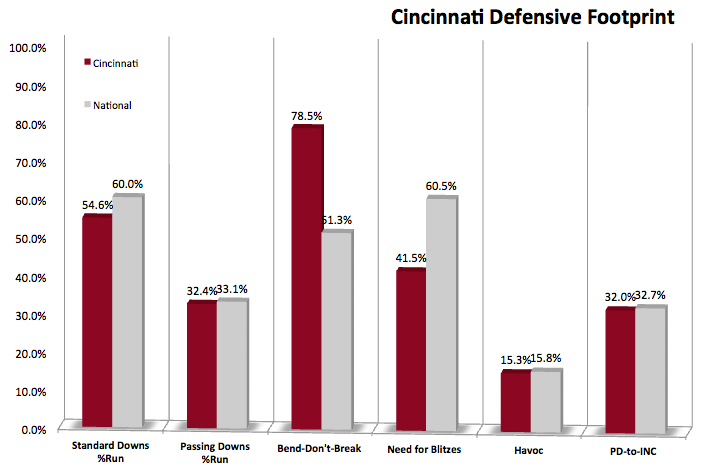 6. Speeding up while tapping the brakes

It's hard to know what to make of a defense that was so bad in the first five games that its overall ratings were pretty terrible despite two months of quality play.

On paper, Cincinnati's defense was a bend-don't-break defense with a strong backbone -- tackles Brad Harrah, Camaron Beard, and Brandon Mitchell, middle linebacker Jeff Luc, safeties Zach Edwards and Andre Jones -- and not quite enough play-making ability on the edges. The Bearcats appeared to ease up and become more of a read-and-react machine over their long hot streak. It also made them really shaky on passing downs.

Defensively, we've changed a little bit of things that we do with our front. We've probably worked more on blitz this spring than we did last year, because we're going to be a pretty good man coverage team.

It was more or less a throwaway line within a short "How'd the spring go?" piece, but this quote was a nice reminder of how Tuberville adapts to his personnel.

The 60-year-old has been around -- he took his first defensive coordinator job at Miami 22 years ago, and this will be his 20th season as the head coach of a major-conference program. His defenses are strong as often as not, and while that has a lot to do with recruiting, it also has to do with adaptation.

Confident in their secondary, Tuberville and his co-coordinators will likely go further down the blitzing road, which could lead to more big plays for both the other offense and UC's defense. End Silverberry Mouton is a decent weapon, but unless a young end like Mark Wilson, Landon Brazile or Marquise Copeland surprises, Cincy will probably need blitzes.

There are plenty of athletic linebackers -- undersized senior Kevin Brown, Clemente Casseus, four-star redshirt freshman Kevin Mouhon, JUCO transfer Antonio Kinard -- but we'll see if it's effective. The secondary won't need a ton of help from the pass rush, but it will need a little.

8. If the front holds up, the back will hold up

Leviticus Payne played both linebacker and cornerback; he is a unique weapon and basically a perfect nickelback candidate. If Adrian Witty returns to form, he and Payne could give safeties Zach Edwards and Andre Jones some lovely security blankets on the edge. And if someone gets hurt, the second string will be made up of players with either experience, upside, or both. The ceiling's awfully high.

9. Young legs save the day

Special teams added a helping hand for the injured Bearcats. They improved from 123rd to 30th in Special Teams Efficiency, and with freshmen at kicker and punter, no less.

Andrew Gantz was solid inside of 40 yards and strong outside of it, and while Sam Geraci didn't have the longest punts, he had some of the highest. Kick returns were still a weakness, but Cincinnati ranked in the nation's top 60 in each special teams category.

There will be a new kickoffs guy in place, but Gantz and Geraci could be the anchors of a teams unit for the next three years. (Or not. Kickers are flaky.)

... this will probably be the best team in the AAC. Cincy will be the safest bet, anyway. The Bearcats return almost every important piece of last year's massively improved offense and special teams units, plus a few more return from injury.

And if a new defense waits until October to find its footing again, it might not be as damaging. Cincinnati gets Temple and UCF at home, and when the Bearcats go to Memphis on September 24, they'll be taking on another team that is trying to find its defensive footing.

That Cincinnati improved and nearly won 10 games despite every reason not to was encouraging. The injury bug could bite just as hard, but if it doesn't, the Bearcats will have the best offense in the league and a defense that is in the more defense-friendly division. (Sorry, UConn. And USF. And UConn. And Temple.) If the right players are able to remain suited up, Cincinnati could do some awfully fun things.